With an increasing number of microphone and reflector array elements, photoacoustic signals can be enhanced and noise can be suppressed, without an increase in detection time.
17 August 2016
Deepa Gupta, Chen-Chia Wang, Jacob Khurgin, Alan Samuels, Sudhir Trivedi and Fow-Sen Choa

Over the past decade, the threats of improvised explosive devices, concealed explosives, as well as airborne chemical and biological agents have become increasingly prominent. With this increase in terrorist activities, the detection of possible chemical, biological, and explosive attacks in an accurate and timely manner is greatly important, and can be a matter of life or death. As a result, worldwide government agencies and military units are seeking technologies that can be used to passively or actively probe threats from near or far, and to detect these threats before harmful events occur. In standoff detection methods identification of chemicals, explosives, and biological signatures can be accomplished without making contact with the target, at distances of several centimeters to hundreds of meters. Such approaches include bulk imaging techniques that use neutrons, gamma rays, x-rays, terahertz waves, or millimeter waves, as well as spectroscopy (e.g., optical and mass) techniques.1 The biggest current challenge in standoff detection involves extending the useful distance range even further. This can be achieved with the use of different techniques to improve the signals and to suppress noise levels from the ambient environment.

Among standoff detection techniques, optical spectroscopy has the potential to achieve the most accurate identification. Optical spectroscopy also involves a relatively small system size, weight, and low cost because of the continuous improvements being made to laser and detector devices. In particular, tunable quantum cascade lasers (QCLs) that are based on mid-IR laser sources2–5 have been developed to replace optical parametric oscillation sources or carbon dioxide lasers, and can be used in optical spectroscopy. In the past, Raman and photothermal techniques have been some of the most prevalent methods used in optical standoff detection. Although Raman spectroscopy can be used to make single-shot measurements for fast detection,6 the process is highly nonlinear and the photon generation efficiency is therefore very poor. In addition, high-power pulsed lasers in the UV or short-visible wavelength ranges are typically required and eye-safety issues are often a concern. With photothermal techniques, IR absorption difference is used to differentiate between materials. To obtain a good thermal image, however, high-sensitivity mid-IR cameras are required.7, 8 Unfortunately, such mid-IR detectors usually have a sensitivity that is about three orders of magnitude lower than that of near-IR detectors. Furthermore mid-IR detector arrays are expensive, they have relatively low array element numbers, and they saturate with rising ambient temperature (which makes it difficult to differentiate subjects from the background in warm areas). In a recent photothermal study, the use of mid-IR QCL excitation and a near-IR (laser vibrometer) probe showed promise for standoff detection by avoiding the aforementioned problems.9 The laser vibrometer, however, was based on a free-space coherent-detection technique that is subject to laser speckle (caused by signal degradation in outdoor environments) and which needs to be overcome to make it successful.

In our work, we therefore focus on an alternative sensing method—photoacoustic (PA) spectroscopy—for standoff detection. In PA spectroscopy, which was first demonstrated in the late 1880s, acoustic waves are generated via the photothermal effect (i.e., from thermal expansion and contraction) and detected by a microphone. It is a sensitive technique that can be used to evaluate the chemical composition of solids, liquids, and gases. An advantage of PA standoff detection is the 1/r (where r is radius) detection-distance dependence (because the microphone detects acoustic wave amplitude rather than energy),10 whereas other energy-detecting techniques have a 1/r2 dependence. With the use of a high-sensitivity microphone, the PA sensing technique should therefore have the best performance of the different optical approaches, with the largest standoff detection distance. Despite the strong performance of PA spectroscopy, this approach can be improved even further by using a number of different systems. For example, with the development of a highly sensitive laser phone, it should be possible to extend the PA sensing standoff distance. In addition, lock-in amplifiers, acoustic reflectors, and microphone arrays can all be used to enhance PA sensing. In particular, we have recently demonstrated successful PA standoff detection of isopropanol vapor, nerve gas simulants, solid-phase TNT (trinitrotoluene), and RDX (‘Research Department explosive’) by employing reflector and lock-amplifier techniques.10–12

We have also shown that arrays of microphones and of microphones/reflectors can be used to achieve ambient noise rejection and signal enhancement for field operations.13–16 Such array beam-forming techniques have previously been widely used in phased array antennas to achieve high-directivity radio frequency beams for radar detection.17 Our acoustic beam-forming technique can also be used to form a highly directional receiving beam. In this way, acoustic signals from any desired direction can be selected and signals from elsewhere are rejected. During a system training period, this process is achieved by adjusting the phase delay of the training signal from each receiving element and then synchronizing the signals so that their sum is maximized. Noise and signal coming from directions other than that of the training signal are cancelled or reduced. In the past, we have experimentally demonstrated this signal-enhancement and noise-reduction approach with the use of a four microphone/four reflector system, as well as with an array of 16 microphones and one reflector.14

The experimental setup of our PA system, in which we use an 8×4 microphone array connected to a 32-channel analog-to-digital converter (controlled by a PC), is illustrated in Figure 1(a). We can adjust the signal delay in each channel by changing the receiving beam direction. The distance between each microphone element is 3cm, which means we can achieve a receiving beam of about 5kHz. We find—see Figure 1(b)—that when the array element number is increased, the acoustic beam-forming signal-to-noise ratio (SNR) improves. With a lock-in amplifier, a time-average is used to improve the SNR and so longer measurement times provide better SNRs. For our acoustic beam-forming technique, we instead use a spatial-average to improve the SNR. This means that with more array elements, we can achieve a better SNR. As a result, with acoustic beam-forming we can reduce the measurement times by using more microphone elements, which is not costly. 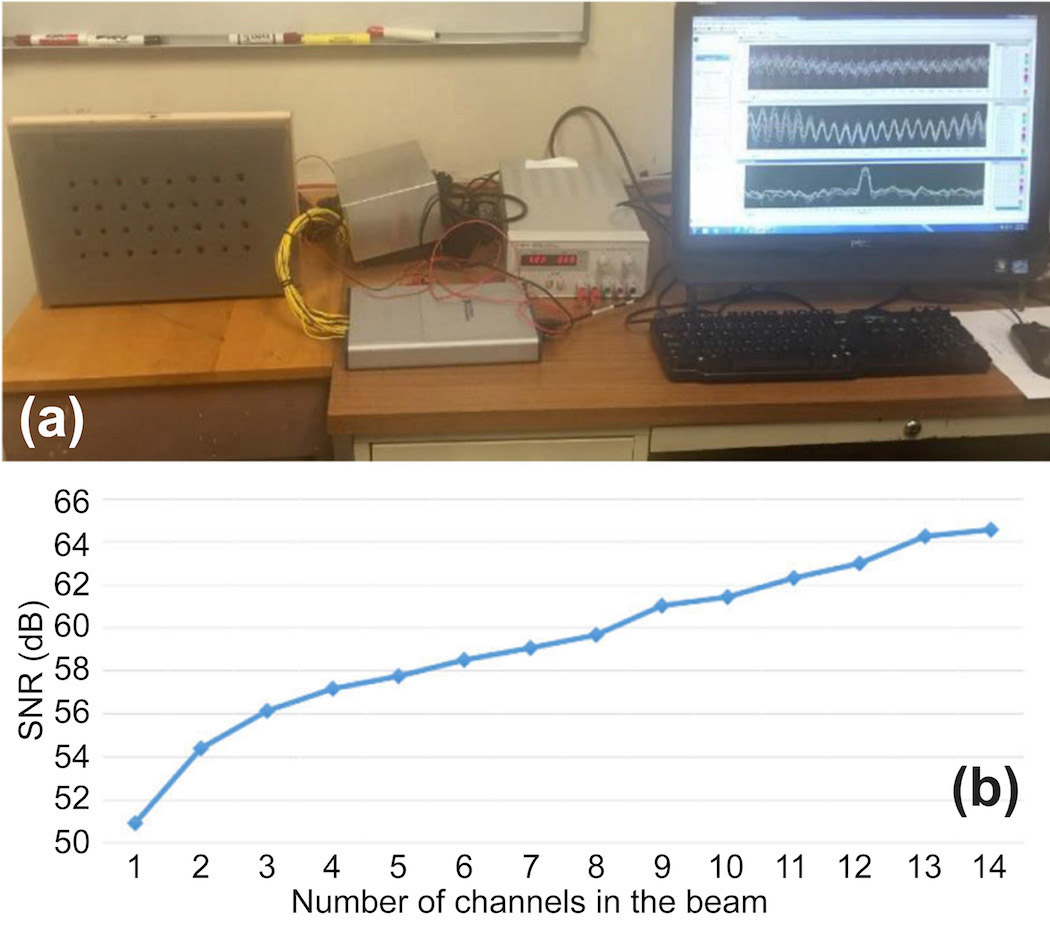 Figure 1. (a) Photograph of the photoacoustic (PA) system that consists of an 8×4microphone array (on the left of the image), amplifiers, a 32-channel analog-to-digital converter, and a PC controller. (b) The signal-to-noise ratio (SNR) of the system can be improved by using more microphone array elements (equivalent to the number of channels in the formed beam).

One of our reflectors, which includes a 16-microphone array, is shown in Figure 2(a). Our photoacoustic receiving system—including a multiple reflector array—is shown in Figure 2(b). With our receiving structures we can obtain very high SNRs for short-distance sensing, but because we are limited by the focal spot size of the reflector, we can only pack a limited number of microphones (with very small spacing) into the focal spot area. As a result, we have to either increase the operating acoustic frequency (which can introduce higher propagation losses) or work over shorter detection distances (because there are smaller phase differences introduced by the small element spacing). In contrast, with the large microphone element spacing of the structure in Figure 2(b), we can effectively—through array summation—cancel noise and detect signals from long distances, as illustrated in Figure 2(c).

Figure 2. (a) A single reflector with a 16-microphone array. (b) Photograph of the PA receiving system structure, which includes a multiple reflector array. In this case the system is being used for standoff detection of isopropanol alcohol (IPA). CO2: Carbon dioxide. ADC: Analog-to-digital converter. (c) Screenshot showing the enhanced signals (large peak) and suppressed noise level that can be achieved through array summation.

In summary, we have demonstrated the utility of photoacoustic spectroscopy for chemical standoff detection. In particular, we have shown that the advantages of an acoustic beam-former are not limited to its highly directional detection capability. Indeed, through our experiments, we have shown that microphone/reflector arrays can be used to achieve enhanced signals and noise reduction. In addition, by obtaining a spatially averaged signal over an array of reflectors (in one mathematical operation), we can achieve faster detections than for time-average techniques (e.g., with a lock-in amplifier). For time-sensitive detections, in life-threatening situations, our array beam-former technology is therefore particularly relevant. In our future work, we will try to increase the array number of our detection systems. We also plan to develop laser-phone-based ultra-high-sensitive microphones18 to further extend the detection range of our technique.