The bulky nature of optical components has long hindered their convenient integration into our daily lives. Digital single-lens reflex (DSLR) cameras, for example, require multiple sets of bulky lenses that must be interchanged depending on the desired imaging parameters. Analogous to the miniaturization of silicon chips that has revolutionized electronic devices over the past few decades, lightweight and planar optical components are key factors for enabling the development of easy-to-carry or wearable devices.

Traditionally, optical devices shape the wavefront of light via propagation through a bulky medium, like a lens. Furthermore, to improve the image quality or extract additional information (e.g., polarization), optical components must be cascaded, resulting in heavy and bulky systems. In this scenario, metasurfaces1–4—which enable wavefronts to be controlled without requiring volumetric propagation—open up a new frontier in optics. Multifunctional, high-performance metasurfaces have been reported, but the materials that are commonly used (i.e., noble metals5 or silicon6, 7) are lossy in the visible spectrum. As a result, practical demonstrations in this region are lacking.

We have recently developed a fabrication approach based on the atomic-layer deposition (ALD) of titanium dioxide (TiO2), yielding high-aspect-ratio nanostructures with negligible material and scattering losses.8 With this TiO2-based metasurface platform,8–11 we have fabricated metalenses that operate at visible wavelengths with unprecedented imaging quality.9 Our metalenses are also capable of resolving chirality, thereby opening up potential applications in drug development, where distinguishing isomeric (i.e., chiral) compounds is essential.10

The building block of our metalenses—a TiO2 nanofin, deposited on a glass substrate—is shown in Figure 1(A) and (B). The phase of circularly polarized incident light is controlled by means of the Pancharatnam-Berry phase12, 13 via rotation of the nanofins: see Figure 1(B). The metalens operates in transmission mode and focuses collimated incident light onto a spot: see Figure 1(C).9 We fabricated three distinct metalenses, with numerical apertures (NAs) of 0.8, to operate at wavelengths of 660, 532, and 405nm (i.e., red, green, and blue light, respectively). A scanning-electron-microscope image of a fabricated metalens is shown in Figure 1(D), and the measured focal spots are shown in Figure 2(A–C). Corresponding vertical cuts of these focal spots—see Figure 2(D–F)—reveal symmetric and subwavelength-focusing features. Full width at half-maximums (FWHMs) of the focal spots for these metalenses are 280, 375, and 450nm, respectively. We also achieved measured efficiencies of 86, 73, and 66% at the three respective wavelengths. 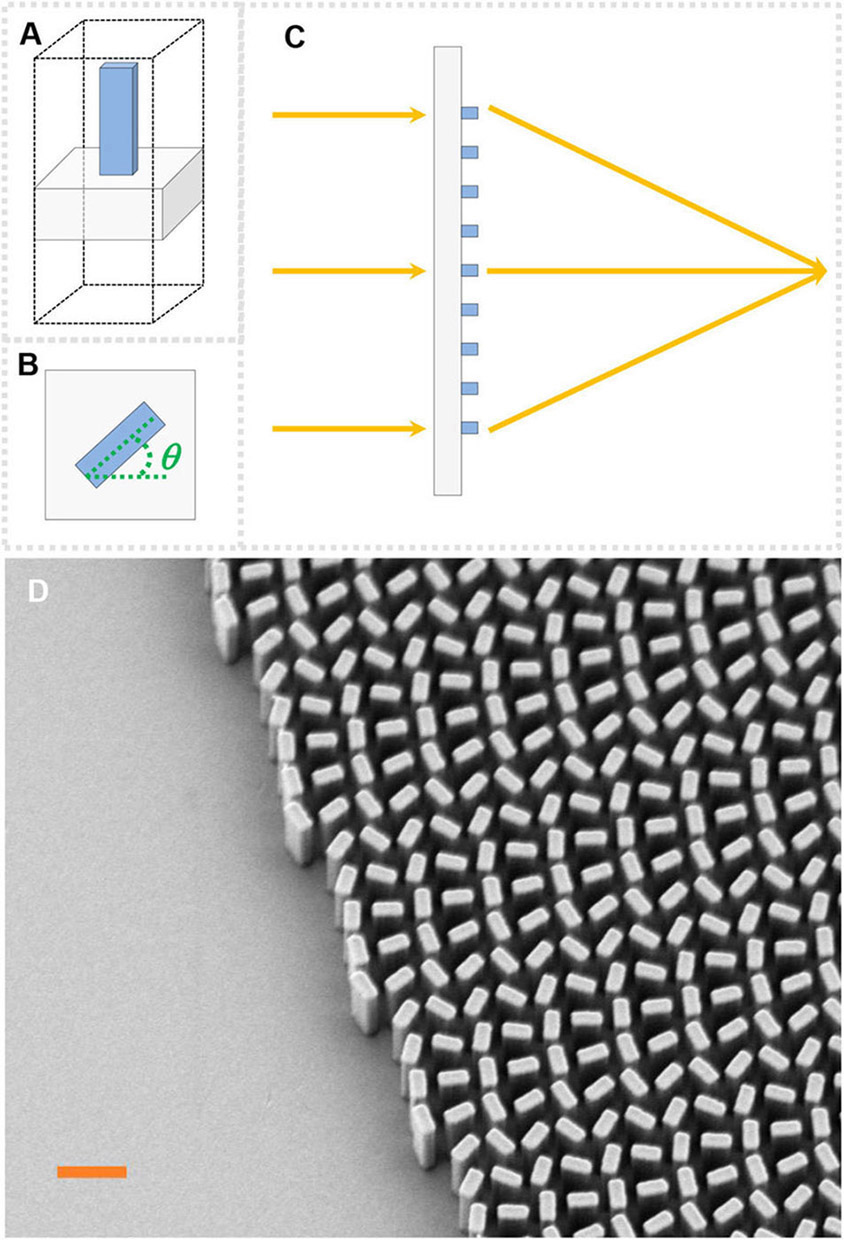 Figure 1. Metalens design and fabrication.9 (A) Side view and (B) top view of our metalens building block, a titanium dioxide (TiO2) nanofin on a glass substrate. Phase is imparted via the rotation of each nanofin by the angle θ. (C) The metalens, composed of arrays of rotated nanofins, focuses collimated incident light to a spot. (D) Scanning electron microscope (SEM) image of a portion of a metalens. Scale bar: 600nm. 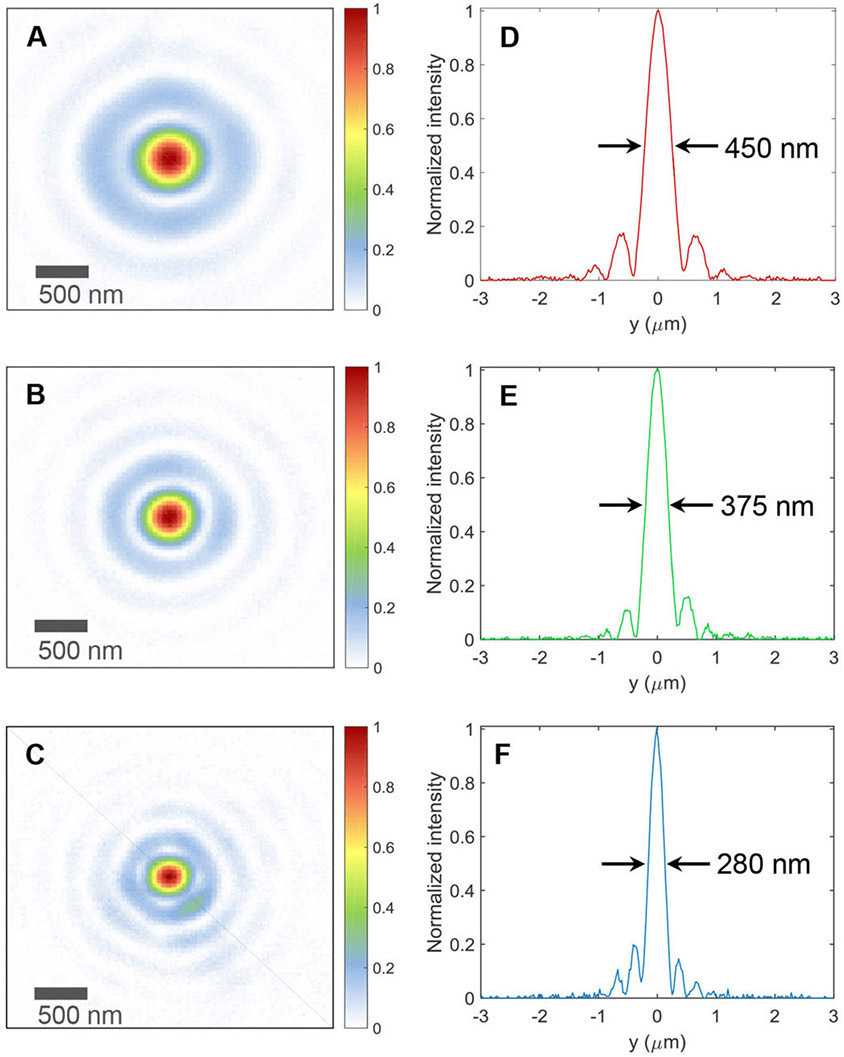 To demonstrate the imaging capability of our design, we fabricated a metalens with a diameter of 2mm and focal length of 0.725mm. Figure 3(A) shows images that we obtained using the metalens. The smallest features on the resolution chart (lines with widths and center-to-center distances of 2.2 and 4.4μm, respectively) are well resolved. We repeated this experiment at different wavelengths. Figure 3(B–E) shows that the metalens can resolve these micron-sized lines across the visible range. We also fabricated arrays of nanoscale holes—see Figure 3(F)—by focused ion beam to further test the resolving power of our design. The metalens formed a clear image of the H-shaped object with all holes resolved, as shown in Figure 3(G). Moreover, the quality of this image is comparable to that formed by a commercial objective lens: see Figure 3(H). We tested the resolution limit of the metalens by imaging four holes with a subwavelength gap of ∼450nm: see Figure 3(I).

Figure 3. Images obtained with a metalens9 of diameter 2mm and focal length 0.725mm. The metalens is designed to operate at a wavelength of 532nm. (A) Image of the 1951 United States Air Force (USAF) resolution chart (Thorlabs Inc.) formed by the metalens at a wavelength of 530nm. Scale bar: 40μm. Images of the smallest feature size—the highlighted region in Figure 3(A)—on the USAF resolution chart at wavelengths of (B) 480, (C) 530, (D) 590, and (E) 620nm. Scale bars: 5μm. The differences in the image size occur as a result of the wavelength-dependent focal length. For example, a magnification of 167× is obtained at a wavelength of 620nm, compared to a magnification of 138×at 532nm. (F) SEM image of the nanoscale H-shaped target (fabricated by a focused ion beam). The minimum gap between two neighboring holes is ∼800nm. Image of the H-shaped target formed by (G) the metalens and (H) a commercial objective with the same NA (0.8). Scale bars: 10μm. (I) Image showing the ability of the metalens to resolve nanoscale holes with subwavelength gaps of 450nm. Scale bars: 500nm.

Additionally, we have realized a chiral metalens (CML)—which forms two images with opposite helicities—by exploiting the circular-polarization sensitivity of the nanofins.10 The CML is composed of interlaced arrays of two nanofin arrangements, shown in Figure 4(A–C). To determine its performance, we used the CML in a series of imaging experiments. First, we imaged a facet of a single-mode fiber. To control the polarization state of the incident beam, we placed a linear polarizer and a quarter-waveplate between the fiber and the CML. The fiber was pumped by a tunable laser with a center wavelength and bandwidth of 550 and 100nm, respectively. The images, captured by a color camera—see Figure 4(D–F)—show that the metalens can simultaneously focus and disperse the broadband incident light. The rainbow-like images are obtained as a result of the dispersion-engineering design of the CML (accomplished by suitably selecting the off-axis focusing angle of the CML). As is expected for linearly polarized light (i.e., the result of superposition between left-circularly polarized and right-circularly polarized components with equal intensities), two identical images are formed within the camera's field of view. 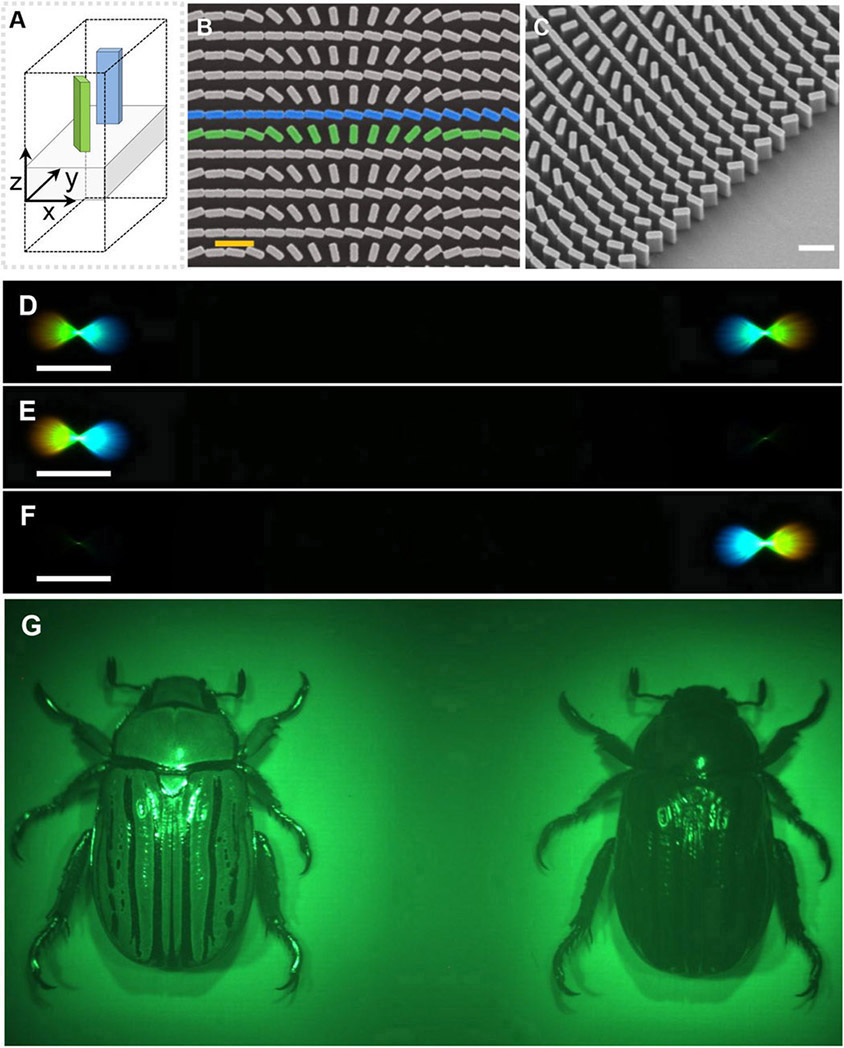 Figure 4. Multispectral chiral imaging.10 (A) The building block of the chiral metalens (CML), consisting of two nanofins on a glass substrate. SEM images showing (B) the top view and (C) the side view of the fabricated CML. Of the two false-colored interlaced arrays of nanofins, the blue nanofins impart the phase required to focus incident right-circularly polarized light, while the green nanofins focus left-circularly polarized light. Scale bars: 600nm. (D) The CML forms two images of a single-mode fiber facet in the field of view of a color camera. Light is linearly polarized. (E) Image formed by the CML when the polarization state is left-circularly polarized. (F) Image formed under right-circularly polarized illumination. Scale bars are 500μm. (G) Two side-by-side images of a beetle, formed within the same field of view by the metalens. Illumination was provided by a green LED paired with a band-pass filter with a 10nm bandwidth centered at 532nm.

We examined the chiral response of the CML by changing the polarization of the incident light to left-circular. For this polarization, fading of the right-side image—see Figure 4(E)—is accompanied by an increase to the intensity of the left-side image. By switching the chirality of the incident light, the opposite effect is observed, as shown in Figure 4(F). We also used our CML to image a biologically chiral specimen (Chrysina gloriosa, a beetle with inherent circular dichroism, CD). As shown in Figure 4(G), the CML simultaneously forms two images of the beetle on the camera chip. These two images possess opposite chirality, and their contrast showcases the very strong CD of the beetle's exoskeleton.

In summary, we have developed a metasurface platform for visible wavelengths based on ALD-prepared TiO2. In doing so, we have fabricated high-performance metalenses with a high efficiency and NA that allow for g focusing and high-resolution imaging. Futhermore, we have demonstrated the flexibility of this platform by realizing a multifunctional metalens with a planar and compact configuration. Together with its simple fabrication (by one-step lithography), this high-performance and versatile platform could find many applications in optics, ranging from imaging and spectroscopy to laser-fabrication processes. In our next step, we plan to realize an achromatic metalens that is suitable for white-light imaging. This development will greatly extend the scope of applications from single-wavelength imaging and spectroscopy to general microscopy, as well as potential mainstream-camera imaging devices.

Federico Capasso is the Robert Wallace Professor of Applied Physics. He joined Harvard University in 2003 after 27 years at Bell Labs, where his career advanced from postdoctoral fellow to vice president for physical research. He and his group have made wide-ranging contributions to optics, photonics, and nanotechnology, including pioneering the bandgap-engineering technique, the invention of the quantum cascade laser, the first measurement of the repulsive Casimir force, and (more recently) research on metasurfaces and their applications (including flat lenses and the generalized Snell's law). He is a member of the National Academy of Sciences, the National Academy of Engineering, the American Academy of Arts and Sciences, and a foreign member of the Accademia dei Lincei. His awards include the SPIE Gold Medal, the IEEE Edison Medal, the American Physical Society Arthur L. Schawlow Prize, and the King Faisal Prize. 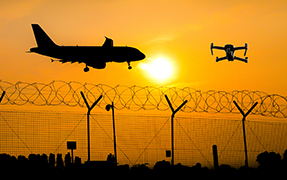