Interfacial contact layers (ICLs) are thin films of semiconductors that can be inserted between the active organic layers and electrodes of organic photovoltaics (OPVs) to significantly improve the performance and stability of the devices. There are two types of ICL: hole transport layers (HTLs) and electron transport layers (ETLs) that require high-work-function p-type and low-work-function n-type semiconductors, respectively.1 As a result of these work-function requirements, a high built-in potential is established across the active layer of the OPV.1 In addition, specific carrier types can be chosen to reduce the amount of recombination in the devices (i.e., to block the minority carriers).1 To minimize losses from contact resistance and absorption, ICLs therefore need to be good electrical conductors and to be transparent to visible light.

Metal oxides are promising candidates for ICLs because of their versatile optical and electrical properties, as well as their excellent physical and chemical stability.2 However, metal-oxide ICLs are usually deposited through expensive vacuum-based techniques that are incompatible with large-area manufacturing processes.2 The use of these methods therefore counters the advantage of OPVs as printable low-cost energy sources. Indeed, commonly used sol-gel methods used to deposit metal-oxide thin films usually require high-temperature post-deposition annealing to achieve the desired optical and electrical properties.3 These methods are thus incompatible with plastic substrates and organic semiconductors.

As an alternative to vacuum-based techniques, solution-processing approaches for the deposition of metal-oxide ICLs are highly desired, and in this work we demonstrate several examples of ICLs deposited from metal-oxide nanoparticle (NP) suspensions. To produce our ICLs we synthesized the metal-oxide NP suspensions with optimized optical and electrical properties. We subsequently cast the suspensions into films that required minimal post-deposition processing. With our method, we thus meet the low-temperature (i.e., room temperature), large-area processing requirements for the fabrication of flexible electronics.4

Zinc oxide (ZnO) and titanium dioxide are the most common materials used for metal-oxide ETLs because they are n-type semiconductors that have wide band gaps and low work functions. Recently, we have achieved independent control over the work function (4.0–4.5eV)5 and band gap (3.25–3.55eV)6 of a ZnO-NP thin film by controlling the amount of diethanolamine (for the work function) or water (for the band gap) in butanol, and by using a microwave-assisted solvothermal synthesis. Reducing the work function in this way results in a proportionally higher open-circuit voltage (Voc) in OPVs—see Figure 1(a)—because the built-in field is increased.5 Furthermore, the high wetting property of the ZnO-NP suspension on organic films allows us to make OPV devices with ZnO-NP/silver top contacts. We thus achieve an equivalent performance, and enhanced ambient stability, to that of widely used calcium/aluminum contacts: see Figure 1(b).6 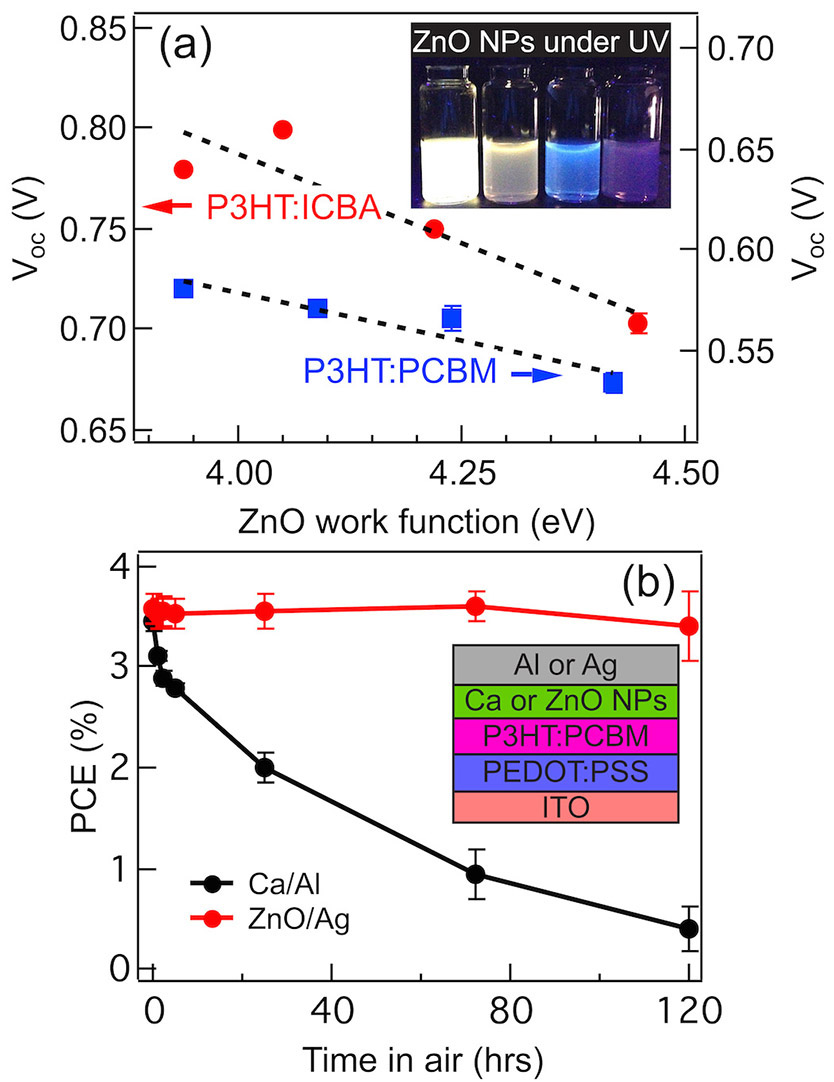 We have also investigated both binary metal oxides and complex oxides as potential HTLs. Although molybdenum trioxide (MoO3) is an n-type semiconductor, it is commonly used as an HTL because of its high work function (>5eV). Through a microwave-assisted solvothermal reaction, we demonstrated the first room-temperature solution-deposited MoOx-NP (where the number x represents variable stoichiometry) HTL (1–4nm thick) in OPV devices.7, 8 By using an in situ oxidation reaction, we can increase the Mo6+ fraction of our MoOx-NP films from 10 to 70%. We can thus realize improved OPV performances, and can achieve an efficiency comparable to that of an evaporated MoO3 HTL: see Figure 2(a).7 To investigate other binary oxides, we developed a general catalytic oxidative method to synthesize suspensions of ultrasmall (1–2nm) NPs, e.g. of MoO3, tungsten trioxide, nickel oxide, and cobalt oxide: see inset to Figure 2(b).9 We find that spin-coated films obtained from these NP suspensions exhibit high work functions (>5.1eV) and—see Figure 2(b)—produce OPV devices with excellent performances.9 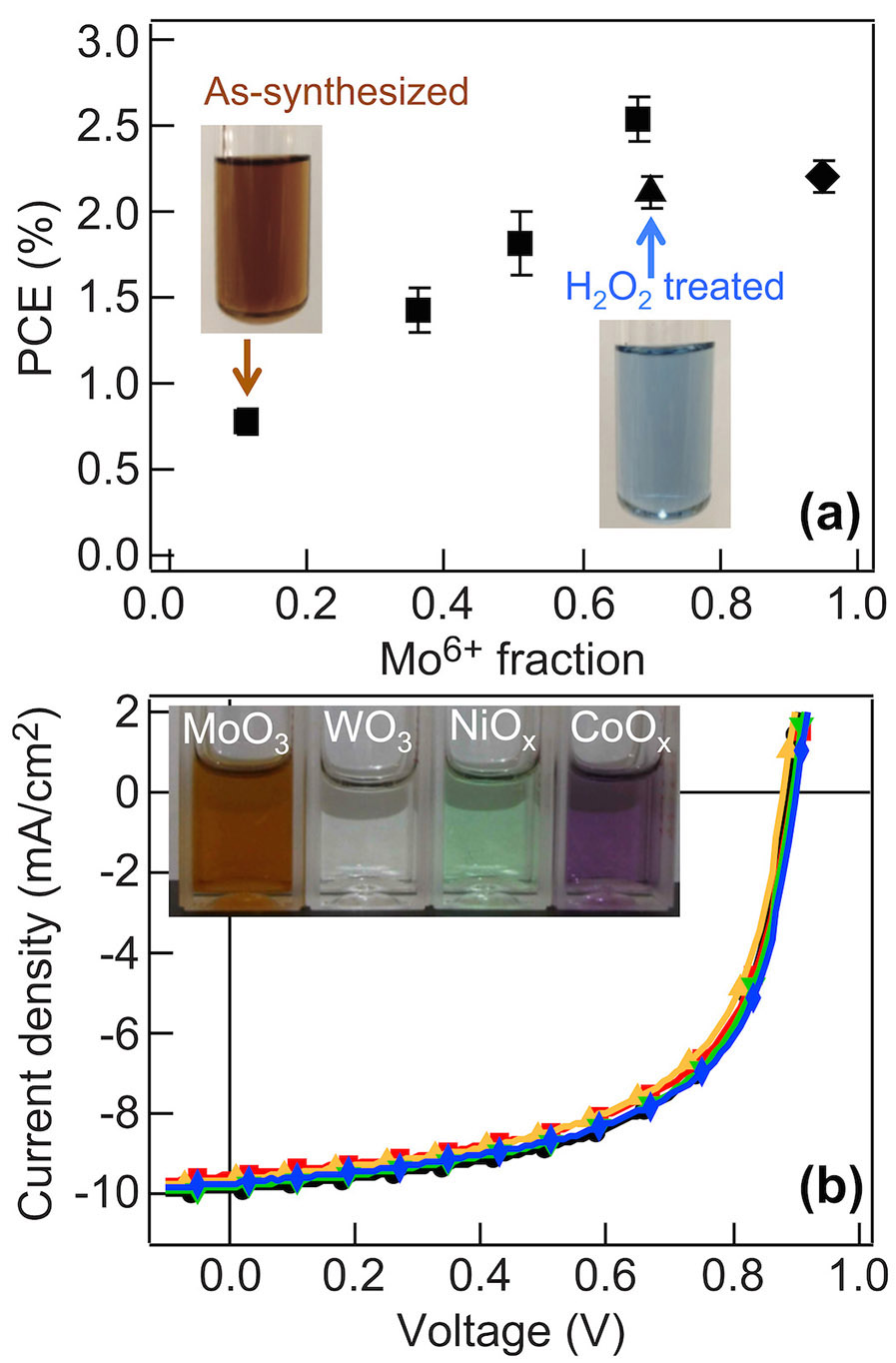 Our search for highly conducting p-type oxide semiconductors for HTLs, led us to delafossite compounds. These compounds have the form Cu+1X+3O2, where Cu is copper, and X is aluminum, gallium, or chromium, and O is oxygen. Delafossites have previously been used as photocathodes for p-type dye-sensitized solar cells and water-splitting devices.10, 11 We have demonstrated a microwave-assisted synthesis of copper gallium oxide (CuGaO2) and copper chromium oxide (CuCrO2) NPs. In this approach, we require a much shorter reaction time (1–8 hours) compared with conventional hydrothermal methods (∼60 hours).12, 13 In addition, the excellent optical transparency of CuGaO2 means that we can achieve a similar performance with a thick (about 280nm) CuGaO2 HTL as we could with an evaporated MoO3 (10nm-thick) HTL in thick-active-layer OPV systems: see Figure 3(b).12 Thick HTLs such as this are more compatible with large-area and high-volume printing processes, but the large NP size—see Figure 3(a)—leads to rough CuGaO2 films. This causes shunted device characteristics, i.e., reduced Voc and an increased slope in the negative bias, and thus reduces the power conversion efficiency of high-performance thin-active-layer OPVs. To overcome this issue, we synthesized a suspension of sub-10nm CuCrO2 NPs, as shown in Figure 3(a). We then cast a smooth and transparent film from this suspension to produce efficient thin-active-layer OPV devices: see Figure 3(b).13 Our results demonstrate that the copper-based delafossite materials are promising HTL candidates. 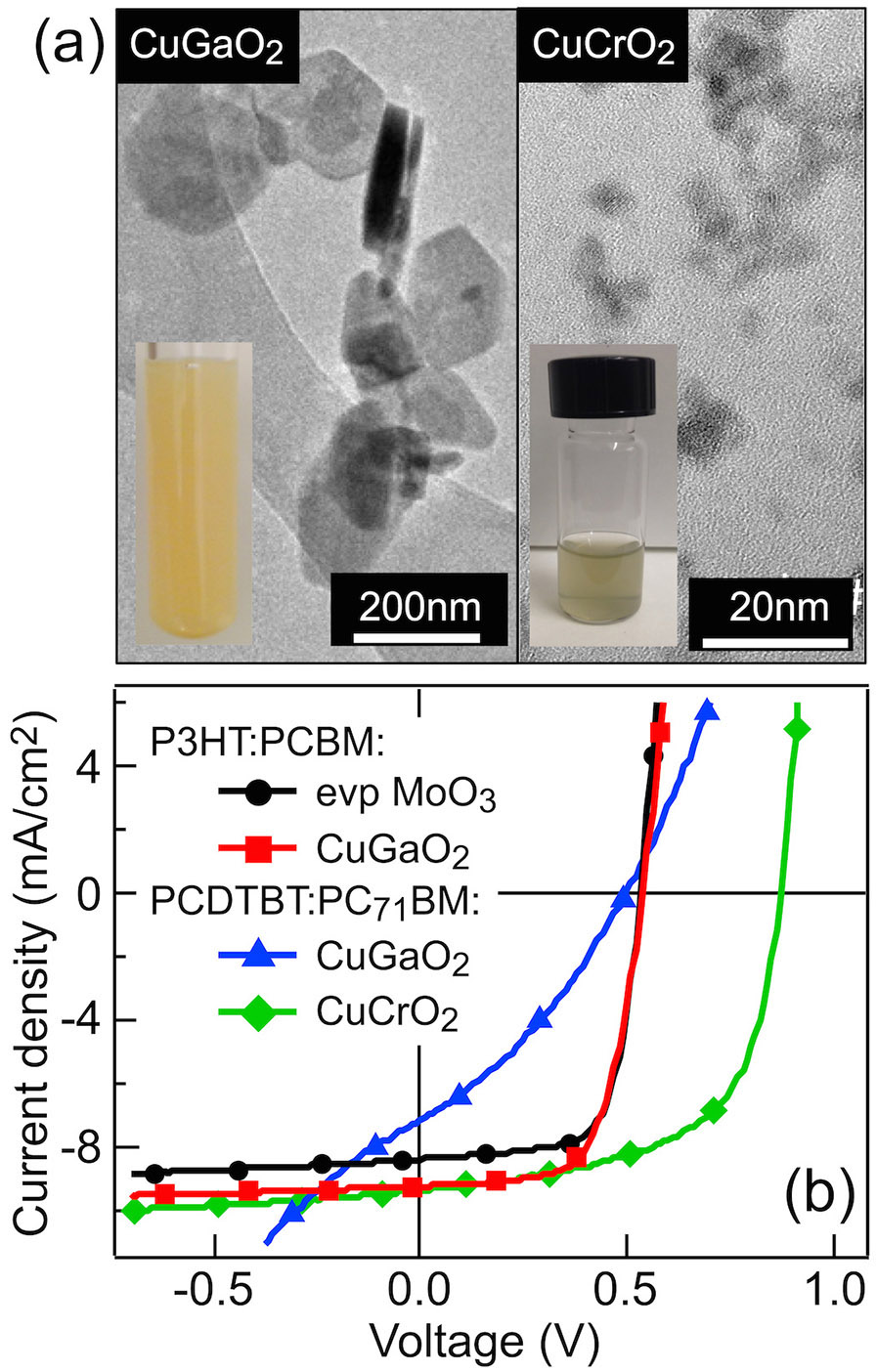 In summary, we have shown several examples of the synthesis of metal-oxide NP suspensions. These suspensions can be used to produce thin films that function as efficient ICLs in OPV devices. We intend to continue exploring low-temperature solution-processing methods for the deposition of metal-oxide thin films. We also plan to extend their application to solar cells beyond OPV devices, by investigating hybrid perovskites, kesterite, copper indium gallium selenide, and cadmium telluride materials.

We acknowledge support from National Science Foundation (DMR-1305893), the University of Texas at Dallas, and the Texas Instruments Distinguished Chair in Nanoelectronics.

Julia Hsu is a professor of materials science and engineering, and holds the Texas Instruments Distinguished Chair in Nanoelectronics. She received her BSE from Princeton University, and her MS and PhD from Stanford University. She is a fellow of the American Physical Society, American Association for the Advancement of Science, and the Materials Research Society.

Jian Wang received a BS degree in materials physics from Jilin University, China, in 2010, and a PhD in materials science and engineering from UT Dallas in 2015. He is currently a postdoctoral fellow in Julia Hsu's laboratory.