A new low-mass, low-power hyperspectral imager for the detection of atmospheric species

Remote measurement of atmospheric species—such as carbon dioxide (CO2) and methane (CH4)—is important in a variety of fields. For example, the detection and quantification of CH4 in Earth's atmosphere is of great importance for climate modeling, whereas the purported CH4 in the atmosphere of Mars may be indicative of a contemporary biogenic source.1 In addition, remote measurements of the energy at 4μm emitted by wildfires has been used to quantify fire radiative power. This quantitative measure of global biomass burning can be used to estimate the amount of carbon liberated into the Earth's atmosphere, and is thus an essential climate variable.2 Lastly, measuring the rate at which active lava flows cool is important for forecasting lava flow hazards.3 Many such atmospheric species exhibit strong absorption features in the mid-wave IR (MWIR) region (3–5μm). Although there are several opportunities to make unique scientific measurements at these wavelengths, there are also challenges of working in the MWIR.

Compared with the long-wave IR (LWIR) spectral region (8–14μm), the MWIR has significantly less available light for detection. For instance, the availability of light over the IR region for both reflected (red line) and emitted (blue line) light is shown in Figure 1. To overcome this difficulty, it is typically necessary to cool MWIR instruments. Such cooling, however, causes the instruments to consume substantial amounts of power and means that they are large and heavy. Nonetheless, emerging interferometric techniques mean that uncooled microbolometer arrays can be used for hyperspectral imaging. This is possible, primarily, because of the higher throughput of light in an interferometer compared with a dispersive spectrometer. Moreover, uncooled microbolometers require much less power than cooled photon-detecting arrays. This makes them attractive candidates for imaging instruments on small satellites. 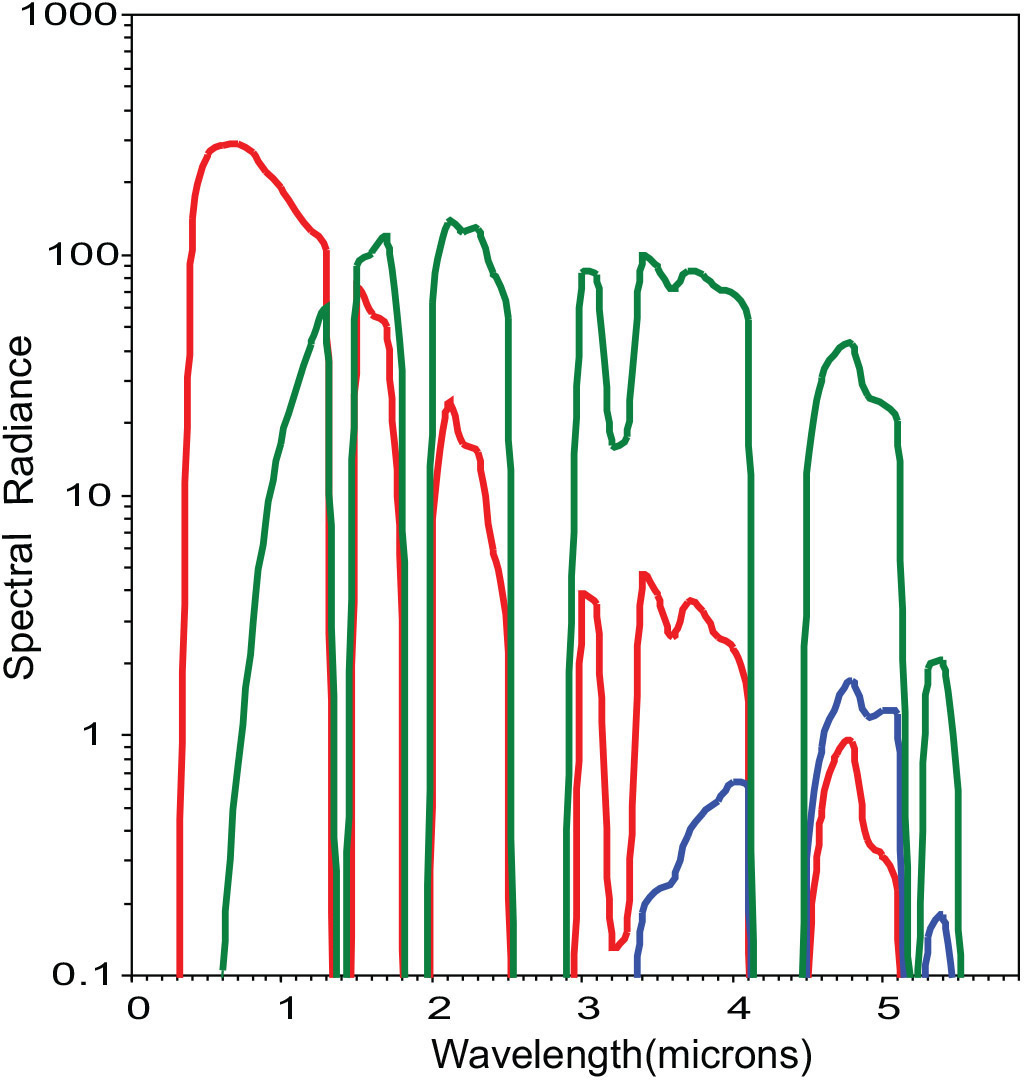 Figure 1. Spectral radiance levels (measured in units of Wm-2sr-1μm-1) available for measurement at the top of Earth's atmosphere. The red, blue, and green curves show the at-satellite spectral radiance from the Sun (assuming reflectivity of 1.0), from a 300K surface, and from a wildfire at 1400K1(where the flame occupies only 1% of the instantaneous field of view and the remainder—99%—is occupied by the ground at 300K). A model atmosphere was assumed for all the calculations.

In our work,4 we have developed the Miniaturized IR Detector of Atmospheric Species (MIDAS) instrument to demonstrate the utility of microbolometers for the detection of atmospheric species. MIDAS is an MWIR hyperspectral imager and has a number of applications within Earth and planetary science. The instrument consists of an uncooled microbolometer that is married with a Sagnac interferometer (see Figure 2).4 Measured light is decomposed into its component frequencies by the interferometer, which includes a beamsplitter and two mirrors. An interference pattern is thus generated, which we then sample and process (using standard Fourier transform techniques) to derive a calibrated radiance spectrum for each scene element. 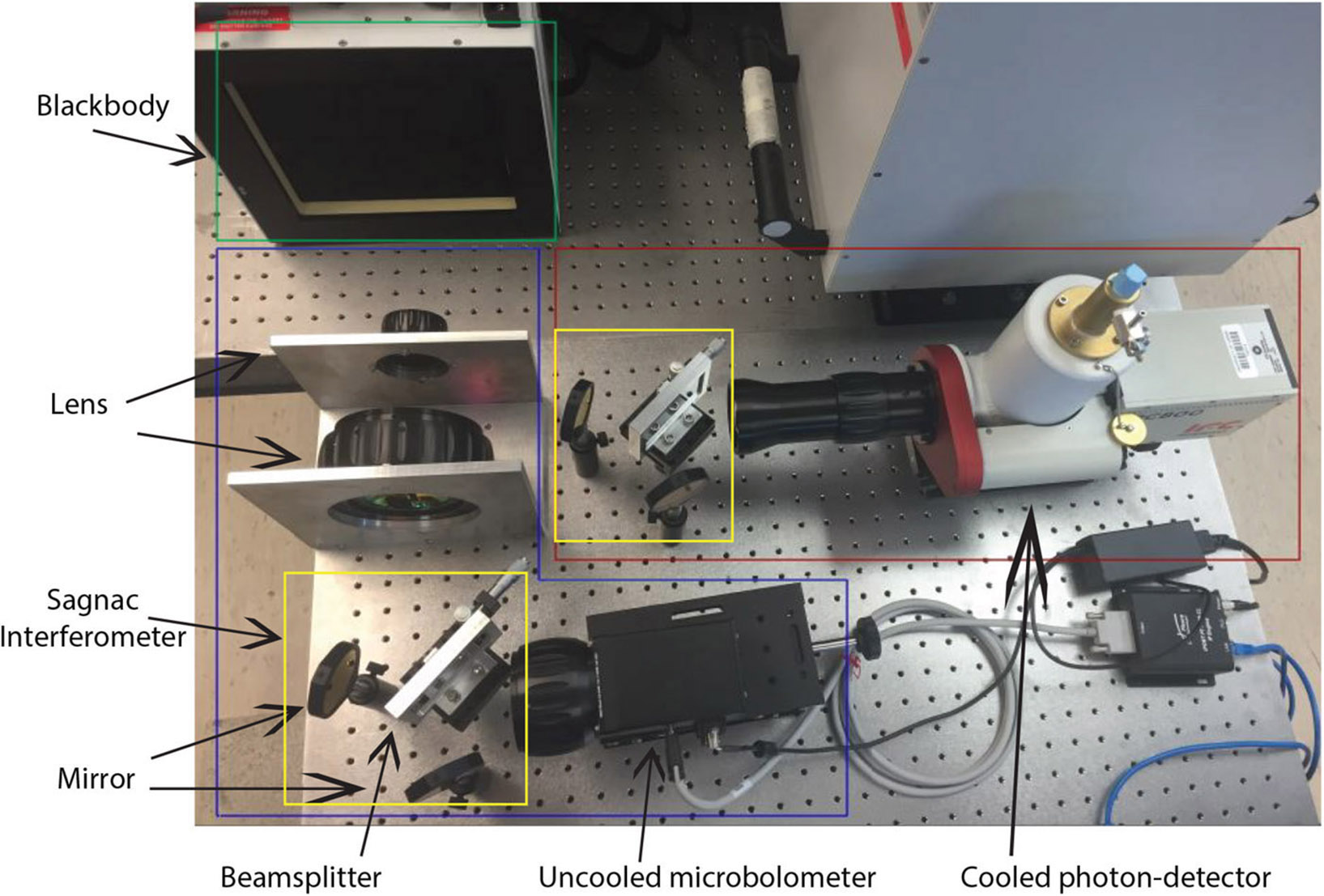 With previous instruments,5 we have successfully demonstrated that uncooled microbolometers (that include Sagnac interferometers) can yield high signal-to-noise levels in the LWIR. Our goal is to determine whether this is also true in the MWIR. To that end, we have used standard characterization procedures—including the determination of noise equivalent different temperature (NEdT), narrow-band NEdT, and spectral response—to benchmark MIDAS against a cooled photon-detection version. The microbolometer alone is intrinsically 20 times less sensitive than the photon detector, but with the Sagnac interferometer we are able to increase the throughput of light. This allows us to take better advantage of the microbolometer's sensitivity.

We will use gas cells filled with known concentrations of CO2 and CH4, as well as large format blackbodies that are capable of simulating a range of relevant background temperatures, to determine how well our MIDAS instrument can be used to detect and quantify atmospheric species. We expect that detection of CH4 will be difficult because of the limited available signal. In addition, our preliminary signal-to-noise results indicate that MIDAS will perform best with high-temperature targets (i.e., that are abundant at the Earth's surface and are of local interest). For example, wildfires liberate carbon into the atmosphere and can reach temperatures of 1400K.2 They emit substantial levels of energy in the MWIR, with a peak emission around 5μm (see Figure 1), and thus represent a useful target for testing MIDAS (for which we are not signal-limited in the MWIR). We will use a high-temperature cavity radiator and a gas cell—filled with varying concentrations of gases—to quantify the precision and accuracy with which MIDAS can be used to quantify thermal emission at the relevant MWIR wavelength.

Recently, we successfully demonstrated the above procedure by using the cooled photon detector to look through a gas cell—filled with CO2 gas at a concentration of 7% (which equates to 7000ppm in the 10cm gas cell)—to a blackbody set to 363K. Our early results (see Figure 3) show a strong CO2 absorption feature at 4.2μm. We now plan to perform this same experiment, and as part of a much larger series, with the full MIDAS setup. This will allow us to benchmark it against the photon detector. With these tests we will also be able to determine which gas concentrations and temperatures MIDAS is most attuned to, and for which the cooled photon detector is the more suitable instrument. 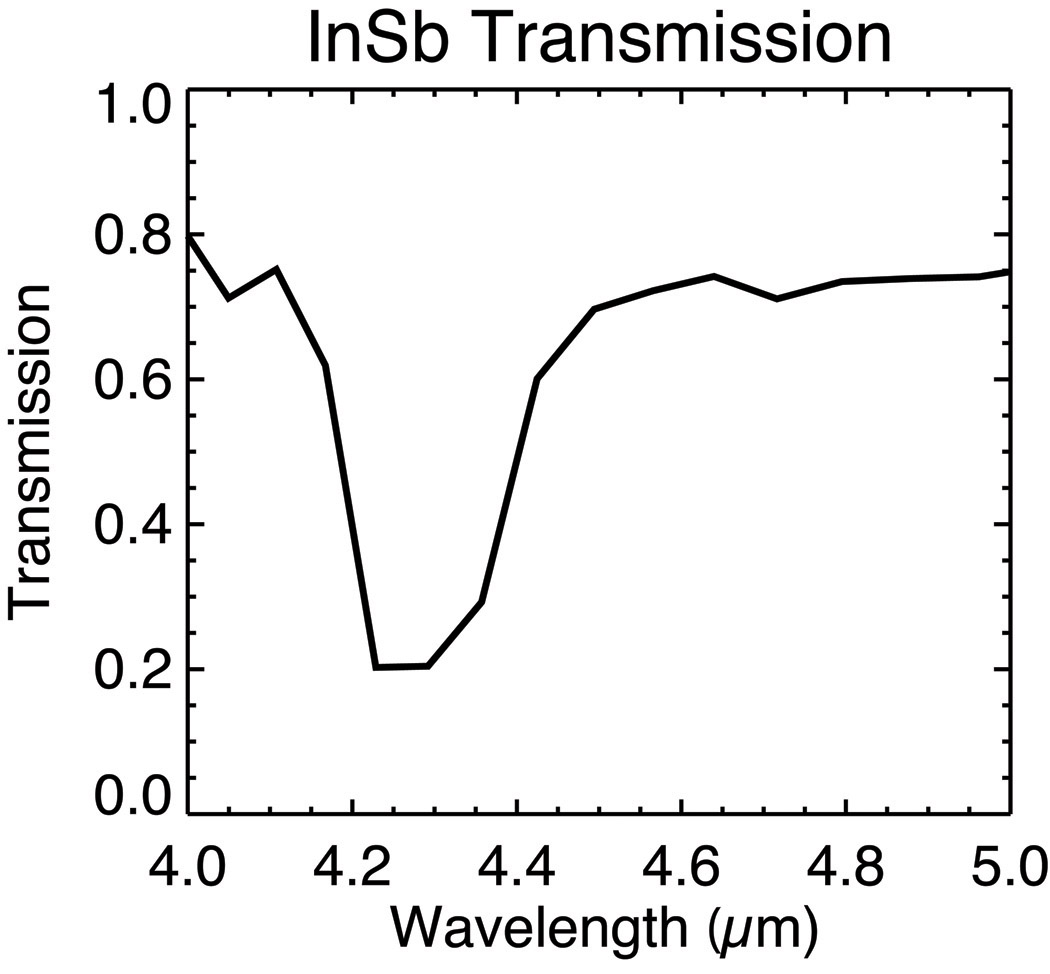 Figure 3. Carbon dioxide (CO2) transmission measured with the cooled photon detector (indium antimonide, InSb) looking through a gas cell, filled with 7% CO2, to a 363K uniform blackbody. A strong CO2 absorption feature is seen at a wavelength of about 4.2μm.

In summary, remote sensing in the MWIR provides important information pertaining to the chemical composition of Earth's atmosphere and to high-temperature phenomena. By combining relatively insensitive, uncooled microbolometers with a Sagnac interferometer, we have developed the MIDAS instrument for hyperspectral imaging in the MWIR. Instruments such as MIDAS are attractive for space applications because of their low mass and low power consumption. We currently have MIDAS set up for benchtop characterizations and simulated field measurements. We will use these tests to evaluate the performance of MIDAS for different Earth and planetary science studies.

Casey Honniball is a master's student of geology and geophysics. She received her BS in astronomy from the University of Arizona, where she worked on radio astronomy instrumentation. Her graduate work focuses on the development and characterization of an IR hyperspectral imager.