Since the development of an enzymatic electrode in 1962,1 biosensors have been proposed for a range of applications (including healthcare monitoring, clinical analysis, drug development, food monitoring, homeland security, and environmental monitoring). Indeed, in recent years, ever more powerful analytical and diagnostic tools have been continuously demanded in the healthcare and pharmaceutical sectors, i.e., for the identification of diseases and for the detection of target biomolecules at very low concentrations, at precise locations that are often hard to reach. New technology-enabled approaches are therefore required for the development of ‘smart needles’ that have unprecedented functionality, integration and miniaturization levels, and that can be used to monitor clinically relevant parameters in real time, directly inside the human body.

Optical fibers (OFs) are unrivaled candidates for such in vivo point-of-care diagnostics. This is because of their intrinsic property of conducting light to a remote location, as well as their microscopic light-coupled cross section, ultrahigh aspect ratio, biocompatibility, mechanical robustness/flexibility, and easy integration with medical catheters and needles. The intriguing combination of on-chip nanophotonic biosensors and the unique advantages of OFs has thus led to the development of so-called lab-on-fiber technology (LOFT).2, 3 Before LOFT platforms can be definitively established, however, there is one main issue that needs to be addressed, namely, the lack of stable, effective, and reproducible fabrication procedures that have parallel-production capability.

To date, many prestigious research groups in the photonics community have focused their efforts on addressing the major challenge of matching the micro/nanotechnology world with that of OFs.4, 5 To further that pursuit and to fabricate regular patterns on an OF tip, in this work we propose and demonstrate a novel lithographic approach that is based on particle self-assembly6 at the nanoscale.7, 8 By exploiting the extreme light–matter interaction that can be achieved when nanostructures are used, we have successfully used our decorated fiber tips as surface-enhanced Raman scattering (SERS) substrates. Such platforms thus enable the realization of ultrasensitive tools for in vivo molecular recognition. 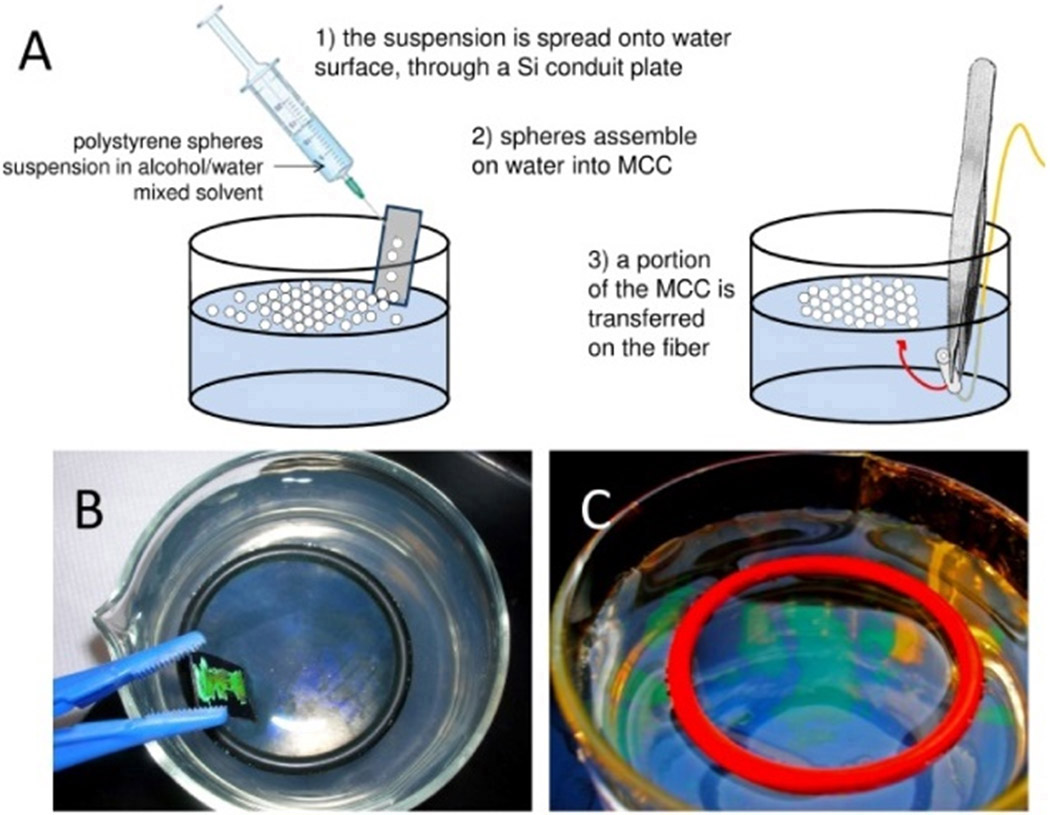 Figure 1. (A) Schematic representation of polystyrene nanosphere (PSN) assembly at the air/water interface (AWI), which leads to the formation of a monolayer colloidal crystal (MCC), as well as subsequent deposition on the fiber. Photographs of (B) the equipment used for the PSN self-assembly at the AWI, where the silicon (Si) conduit plate is partially immersed in the water (as indicated by the bright green color caused by the presence of the packed nanospheres) and (C) the MCCs (which appear green because of light diffraction) floating on water.

By applying further treatments to the MCCs, we can efficiently produce different nanostructures (with completely different morphological features), as shown in Figure 2. We obtained a close-packed array of metallo-dielectric nanostructures by simply depositing thin gold overlays on the uncoated fiber/MCC assemblies. We also produced arrays of gold triangular nanoislands by removing the metal-coated spheres. Furthermore, we can easily obtain sparse arrays if we use oxygen plasma etching on the uncoated fiber/MCC assemblies to reduce the PSN size. Holey gold nanostructures can be obtained—through PSN removal—from the sparse arrays. In our work, we have also verified the repeatability of our process (see Figure 3) and have thus demonstrated the effectiveness of our proposed fabrication route. 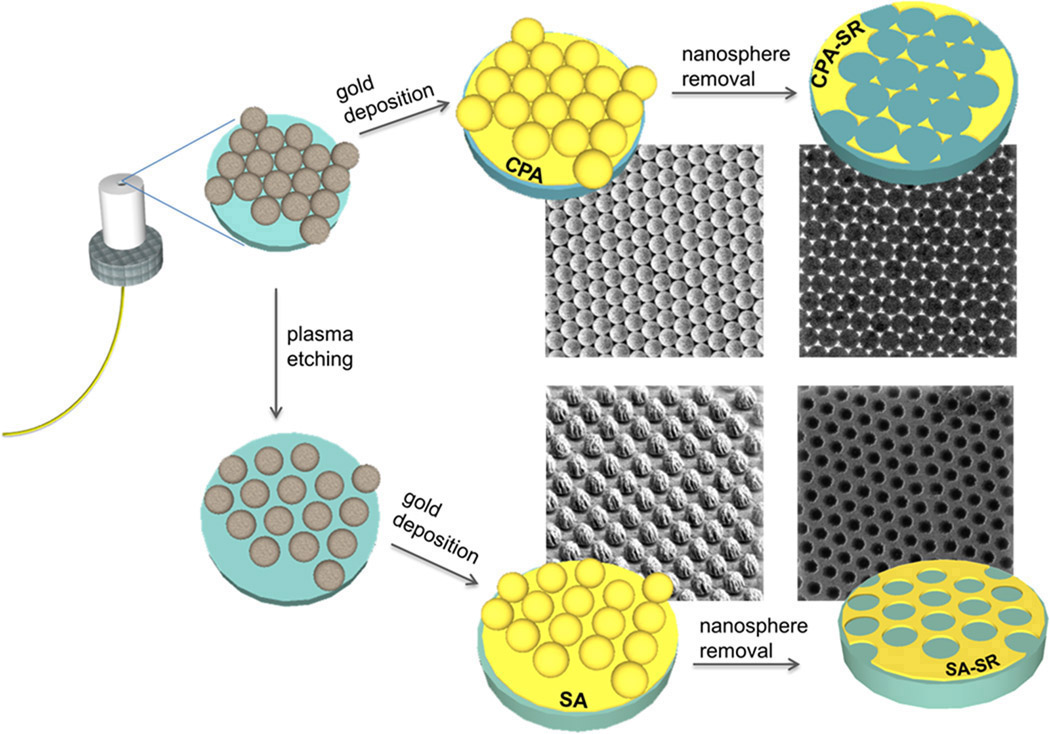 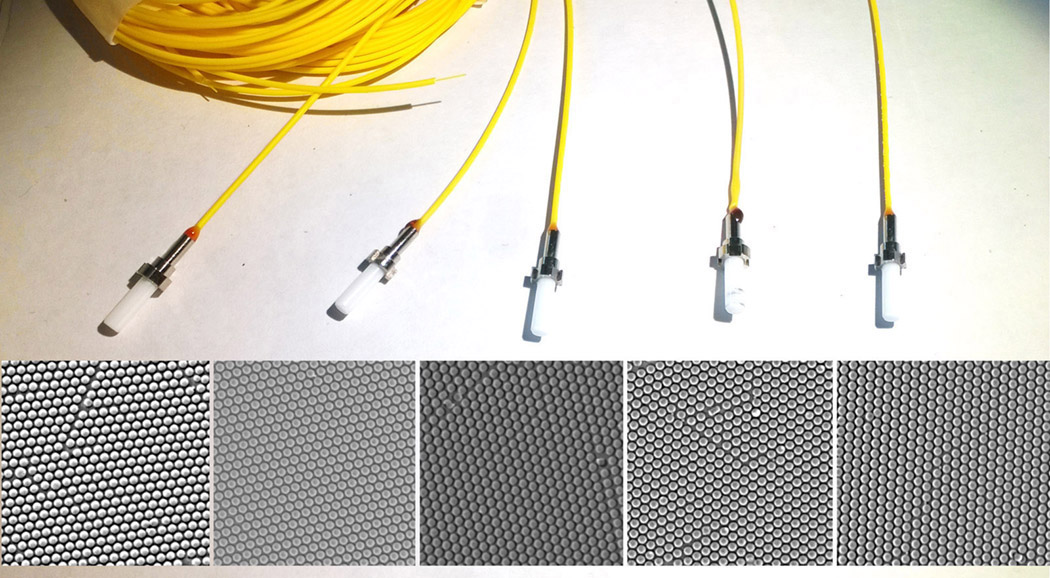 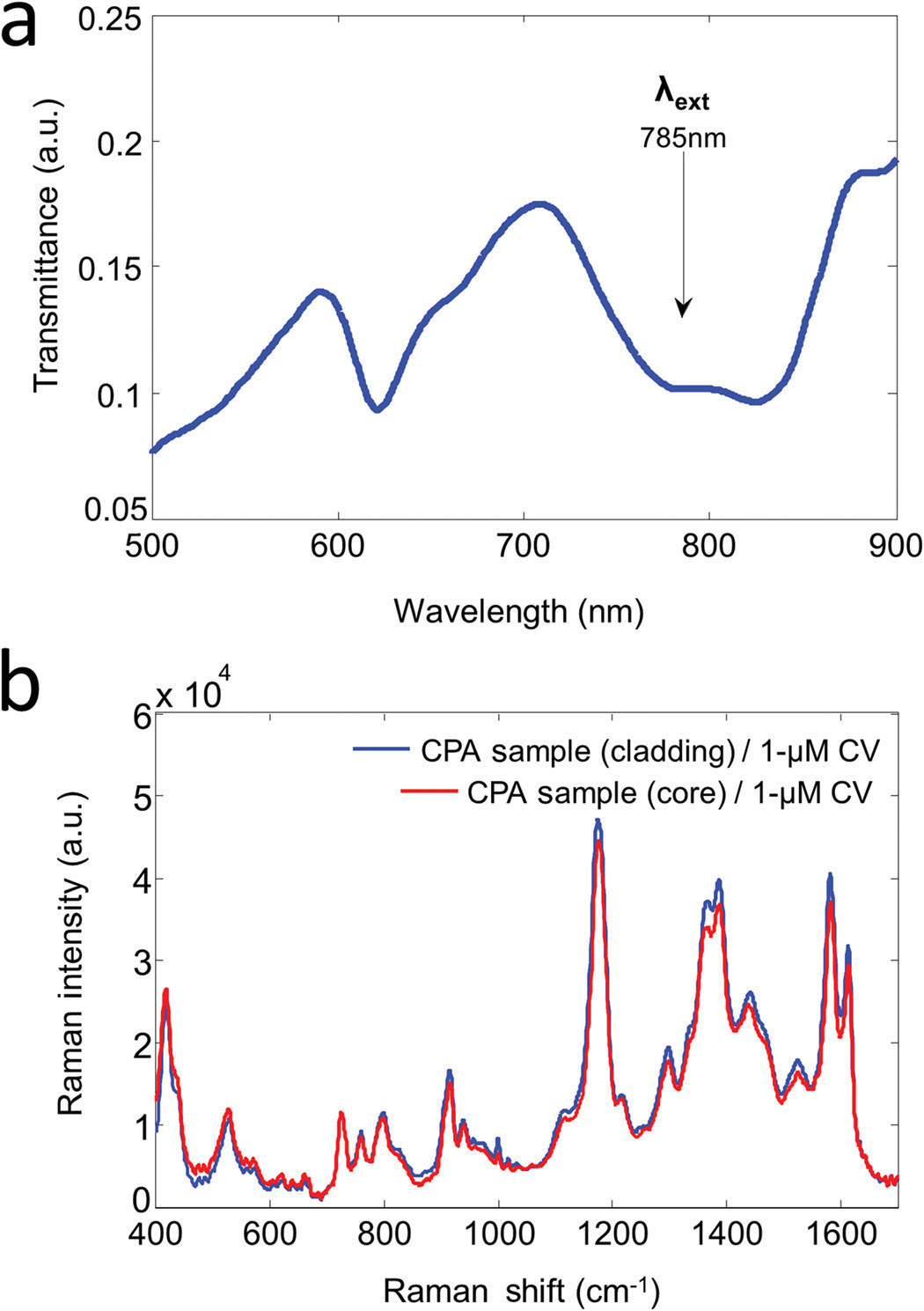 The kinds of complex, nanoscale, metallo-dielectric structures we have produced can trigger interesting plasmonic phenomena (with strong field localization) and can thus enable the development of advanced platforms for biosensing applications.9 In our study, we conducted SERS measurements (in which illumination and collection of the scattered light were made externally to the fiber tip) to demonstrate that our decorated fiber tips can be used efficiently as repeated SERS substrates. In these tests, we detected the benchmark molecule (crystal violet) at a concentration as low as 1μM (see Figure 3).

In summary, we have developed a simple and cost-effective self-assembly approach for the integration of functional materials (at the nanoscale) on OF tips. Our methodology thus provides a valuable tool for the development of advanced OF bioprobes. In particular, we have demonstrated the fabrication of reproducible SERS fiber tips that can be used to detect a benchmark molecule at a very low concentration. We now hope to drive the exploitation of this promising technology for practical scenarios. Specifically, we will address important issues such as the identification of suitable methodologies for the excitation and collection of Raman signals with the same patterned OF.