Microendoscopy for molecular imaging inside the human lung

A multicolor widefield-fluorescence-microendoscopy system enables the detection of multiple disease states within the human lung.
18 May 2017
Mark Bradley, Anne Moore and Nikola Krstajić

One of the greatest challenges facing modern medicine is the inexorable rise of multidrug-resistant infections. In addition to better antibiotic stewardship, this challenge demands improved methods of diagnosis and treatment. Pulmonary diseases, which are responsible for a significant burden of disease and death worldwide, are among the conditions for which diagnosis must be improved. Little is currently known about the processes that drive lung disease. The ability to accurately diagnose and stratify patients would thus help clinicians overcome one of the main challenges presented by patients with severe respiratory diseases in the intensive care unit (ICU), and would help prevent the overuse of antibiotics.

In conjunction with flexible bronchoscopy, which is routinely used in the ICU, microendoscopy can be used for in vivo examination of the lung. In this process, a narrow optical-fiber imaging bundle is inserted through the working channel of a bronchoscope, thus allowing images to be obtained from deep within the lung. Single-color confocal microendoscopy has previously been evaluated for distal lung imaging (generally with green fluorescence).1 Tissue autofluorescence will, however, often mask disease targets at this excitation wavelength (488nm). As a result, there is a pressing need to shift fluorescence microendoscopy into the red and near-IR region, where autofluorescence is much weaker. The lack of tools and approaches that can be used to interrogate the biology of the distal human lung in situ has been a significant hurdle in developing and evaluating new treatments of pulmonary infection and inflammation. Driven by this requirement, we are hoping to empower clinicians to perform a molecular optical biopsy with immediate bedside results.

To this end, we are developing camera-based solutions2 that provide a robust and economical route to multicolor fluorescence detection. Our initial two-color widefield fluorescence microendoscopy system3 (see Figure 1) comprises off-the-shelf commercial components. Light from two LEDs (with center wavelengths of 470 and 625nm) is directed to the microscope objective via an emission filter and a two-color dichroic mirror. This light then travels through an imaging bundle. Fluorescence from the lung, which is returned via the same fiber, is subsequently focused onto a color CMOS camera. This camera is connected to a computer via USB3, allowing the acquisition of images at up to 162 frames per second with a resolution of 1900 × 1200 pixels. We designed this system with a simple user interface and robust packaging (see Figure 2), making it suitable for use in experimental clinical research settings. 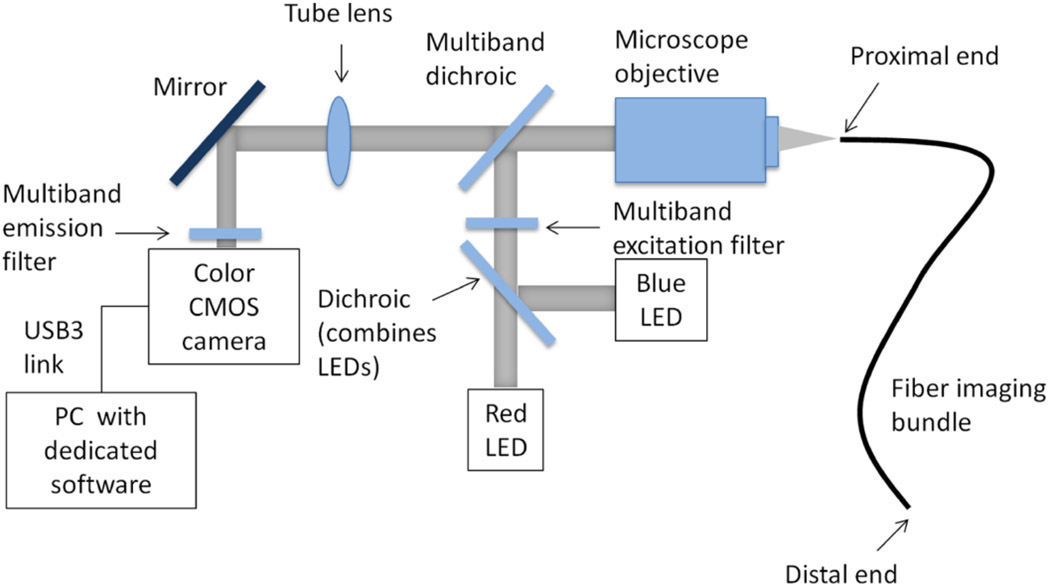 Figure 1. System diagram of our two-color fluorescence system. Two LEDs (with center wavelengths of 470 and 625nm) are combined with a dichroic mirror. Illumination from these LEDs is sent to the microscope objective via the emission filter and another two-band dichroic mirror. Fluorescence that is returned from the imaging bundle is then focused onto the color CMOS camera via a tube lens with a focal length of 200mm. 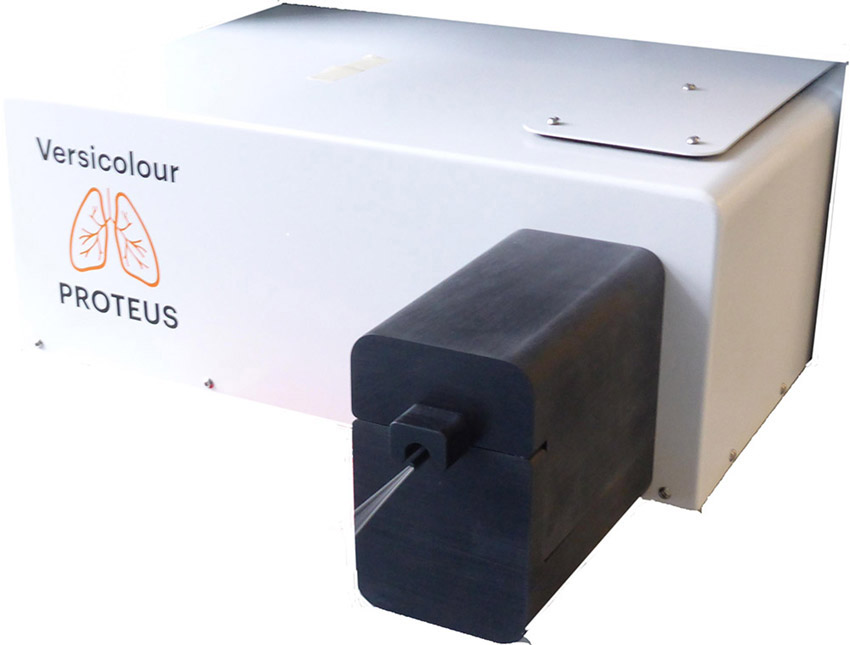 Figure 2. Our imaging system, packaged for use in the clinic.

To optically characterize our imaging system, we measured the lateral spatial resolution, the spectral throughput of illumination and fluorescence collection, and the chromatic focal shift. We also verified the camera read noise and its performance at high-frame-rate acquisition. Our device achieved a lateral resolution of 4.38μm with a camera read noise of 8e−, a chromatic focal shift of ∼5μm, and a high contrast on both colors simultaneously. We were also able to image at both 20 and 200fps. Faster frame rates do, however, decrease the amount of fluorescence that is captured by the sensor, and require fast display hardware. The biggest challenge that we face going forward is maintaining the high contrast of our device while adopting near-IR imaging for true multiplexed three-or-more color molecular imaging.

To investigate the imaging performance of our system, we carried out experiments using optical standards (i.e., fluorescent microspheres with a mixture of sizes and colors) in ex-vivo lung tissue with labeled targets. Red-labeled monocytes are easy to distinguish against a green autofluorescence background: see Figure 3(a). Green-labeled neutrophils are also visible, as shown in Figure 3(b), but are harder to interpret, and the green label must be strong to appear visible against a varying background. For larger objects, such as Aspergillus fumigatus—see Figure 3(c)—the red labeling provides a striking contrast as a result of the large size of the fungus. Clinical imaging requires quick interpretation of results, and this is made easier with larger object sizes and red-shifted fluorescence.

Figure 3. Images of multiple targets in ex vivo lung tissue. (a) Monocytes. (b) Neutrophils. (c) Aspergillus fumigatus. We set an exposure time of 80ms (12fps), and a gain of 24dB. Eight-bit images were obtained with a camera resolution of 960 × 600.

Taking a prototype device from the bench into the clinic represents one of the biggest challenges involved in this work. Achieving this transition required regular design-review meetings with collaborators and consultants who were stress testing the design architecture (i.e., in terms of risk management and technical performance). This complex process necessitates medical-device design-quality system management (i.e., according to BS EN 13485) and European Union legislation (i.e., the Medical Devices Directive) to be taken into account. Additionally, our practices for optical and electrical design had to follow a suite of international standards (i.e., BS EN 62304, BS EN 60601, BS EN 62825, BS EN 62471, and BS EN 14971). As part of the process, our device was required to undergo electromagnetic compatibility testing in a dedicated facility, and to pass rigorous electrical safety testing by the local NHS (National Health Service). As a result of these tests, the device has been fully approved for use in a local hospital setting.

In summary, we have developed a prototype imaging system for the in vivo detection of enzyme activity or bacterial presence in multicolor scenarios. The use of multiple fluorescence channels allows us to generate multiplexed information for the simultaneous detection of multiple targets,4–6and has the potential (when coupled with molecular imaging agents) to enable clinicians to decipher whether the suspected pulmonary disease has inflammatory, infective, or scarring/cancerous etiologies. In our next steps, we plan develop a three-color imaging system that incorporates a near-IR channel to give us a spectral window by which to detect tissue with minimal or non-existent autofluorescence. We also intend to extend the feature range of our system by adding the ability to sense physiologically important parameters (e.g., pH) deep within the distal lung.

Mark Bradley is the director of Proteus, an Engineering and Physical Sciences Research Council Interdisciplinary Research Collaboration (ESPRC IRC) that links together disciplines such as optical physics, chemistry, biology, clinical science, and engineering. He has published more than 300 peer-reviewed papers, filed some 20 patents, and is co-founder of Ilika Technologies (IPO 2010) and Edinburgh Molecular Imaging.

Anne Moore studied mathematics at the University of Cambridge and went on to earn a PhD in signal processing from the University of Edinburgh. She worked for 16 years in industry before returning to academia to complete a PhD in molecular plant science. She currently manages the EPSRC IRC Proteus project.

Nikola Krstajić, an EPSRC IRC Proteus postdoctoral research associate, works in fluorescence endoscopy and detector integration. His interests include both photonics-system and component design. After completing industrial work in medical and scientific instrumentation, he received his PhD in physics from the University of Surrey in 2007, and has since worked in biomedical optics at a number of universities.