The process of computer holography involves the digital generation of holographic interference patterns. This technique is used in a wide range of applications, such as in 3D displays,1 projectors,2, 3 diffractive optical elements,4 and encryption.5 The calculation of holograms from 2D and 3D objects generally requires the addition of a random phase to widely diffuse the object light (which mainly comprises low-frequency components of narrow-angle object light). This approach is illustrated in Figure 1, where an original image—see Figure 1(a)—and image reconstructions from holograms generated with and without the random phase are shown. When the random phase is not used—see Figure 1(b)—it is nearly impossible for the original image to be retrieved in the reconstruction. This is because the narrow-spreading object light means that it cannot be recorded on the hologram. In contrast, when the random phase is used—see Figure 1(c)—the reconstructed hologram retrieves the original image well. Although the random phase technique has been used in computer holography since the 1960s,6 it unfortunately leads to a considerable amount of speckle noise in the reconstructed image. 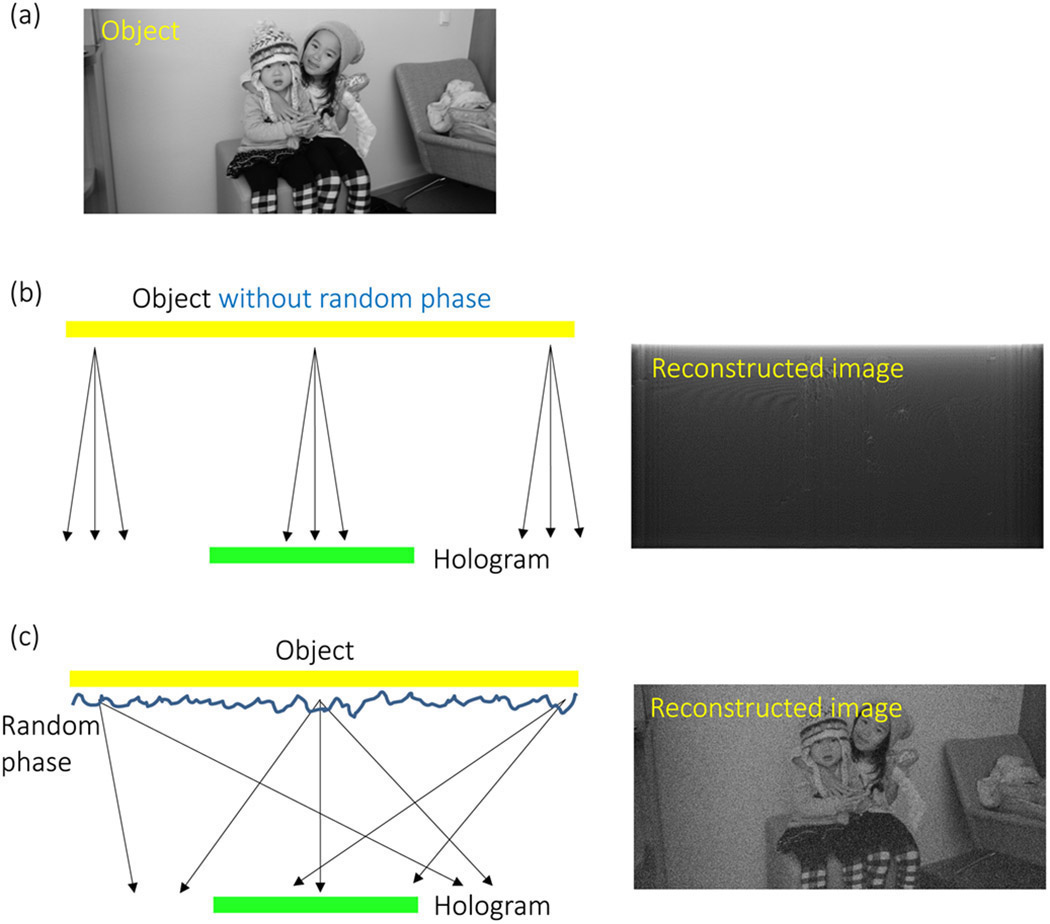 In the currently available computationally efficient methods, the object light that is processed via the random phase method is uncontrollable, and it leads to the speckle noise and to the degradation of the spatial resolution of the reconstructed image. It is possible to use iterative optimization methods, e.g., the Gerchberg–Saxton algorithm,7 to reduce the speckle noise and improve the spatial resolution of the holograms, but these methods are time-consuming. The development of new methods for obtaining high-quality images via computer holography is therefore greatly desired.

We have recently reported a simple and computationally inexpensive method known as ‘random phase-free computer holography’ with which we can drastically reduce the speckle noise and enhance the image quality.8–13 We achieve this by multiplying the object light with the virtual convergence light. The effectiveness of our method means that our reconstruction—see Figure 2(a)—of the image in Figure 1(a) has lower speckle noise than in the reconstructions of Figure 1(b) or (c). We also demonstrate—see Figure 2(b) and (c)—that the spatial resolution achieved with our proposed method is better than that of the random phase method. 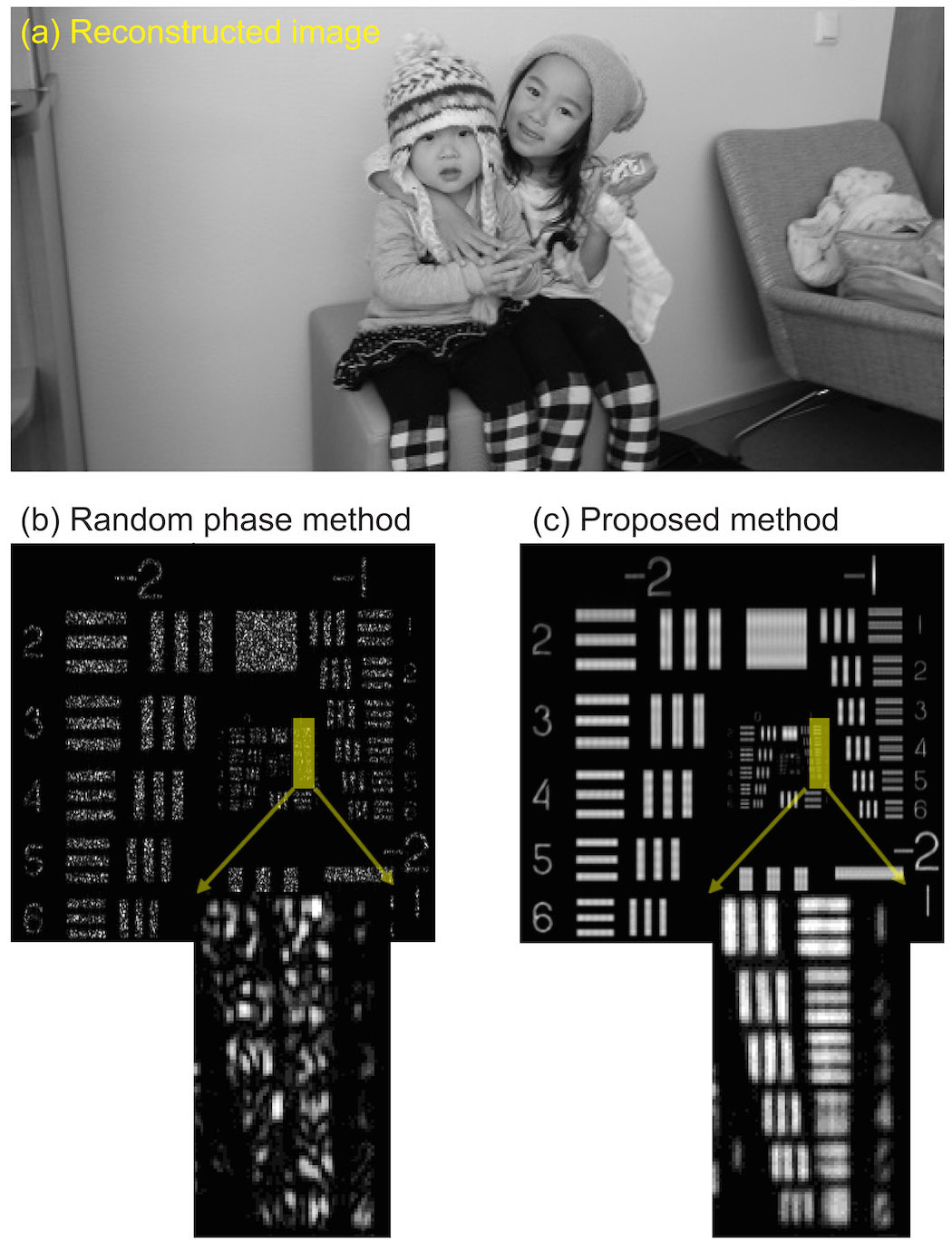 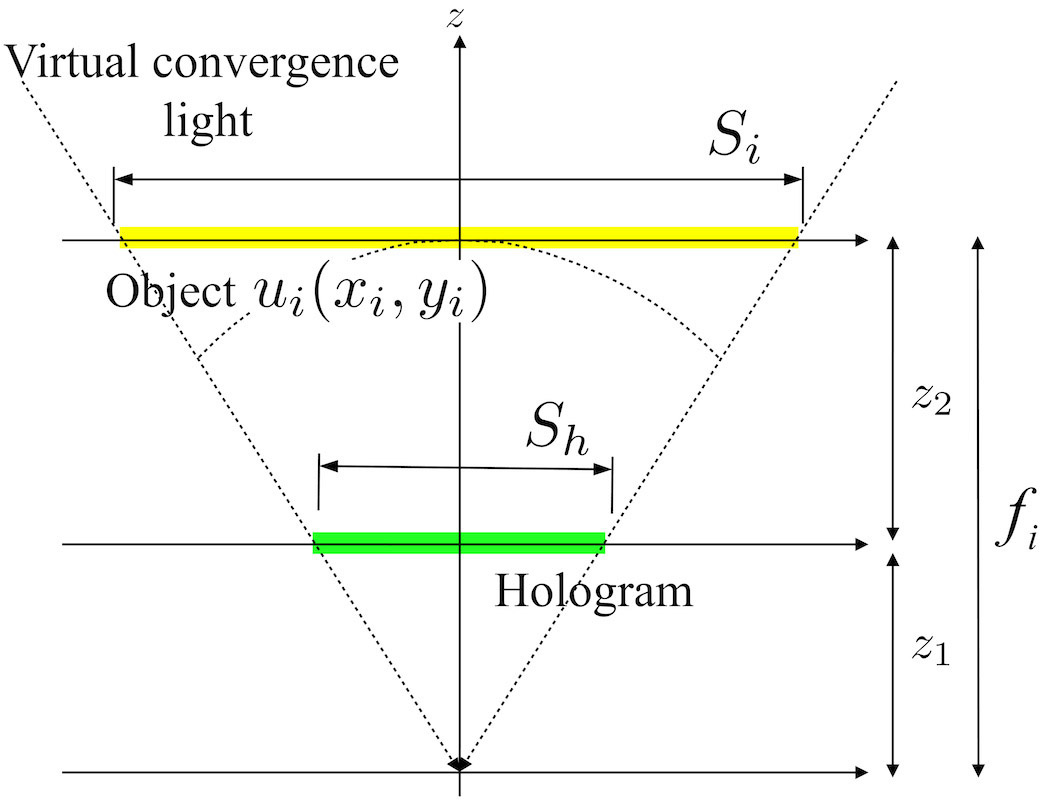 The effectiveness of our technique14 arises because the convergence light can be used to change the directions of the 0th-, +1st-, and –1st-order wave vectors of an object to the hologram. The original and changed wave vectors are represented by the solid black and red arrows in Figure 4(a), respectively. In other words, the object light is equally distributed on the hologram. For comparison, we illustrate the equivalent situation for a Fourier hologram in Figure 4(b). In this case, if fi of the convergence light is equal to z2, the 0th-order light of the object is strongly concentrated on a small area of the hologram (as indicated by the blue dashed arrows). This is a well-known problem with Fourier holograms. In addition, a high dynamic range of the hologram arises from this concentration. The effective utilization of the dynamic range is particularly important for the amplitude hologram because the amplitude of spatial light modulators (SLMs) only has an 8bit dynamic range. In contrast, with our proposed method, the concentration is dispersed over the entire hologram and our average dynamic range is lower by a factor of 5–10 for the situation illustrated in Figure 4(b). This is therefore a favorable feature for use in low-dynamic range SLMs. 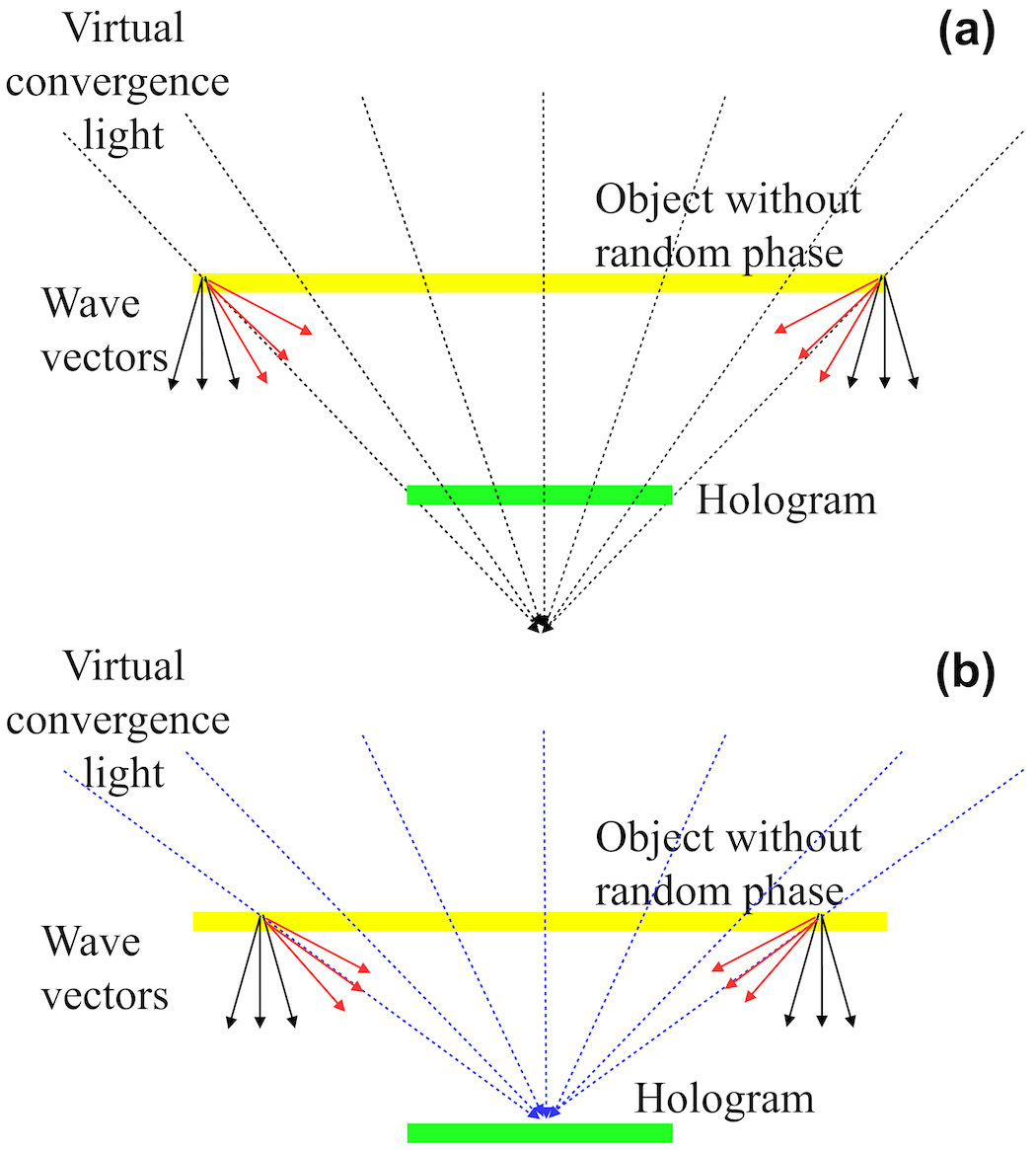 Figure 4. Intuitive illustration of the effectiveness of convergence light for (a) the proposed phase-free method and (b) a Fourier hologram.

Unlike with other projection methods, holographic projection does not intrinsically require any lenses (e.g., a zoom lens). Indeed, the lensless zoomable holographic system—see Figure 5(a)—is extremely simple because it requires only an SLM and light source, and it is therefore a promising technique for use in ultrasmall projectors. Furthermore, our proposed methodology is applicable to lensless zoomable holographic projection.3, 15,16 To demonstrate this application of our approach, we used an amplitude-modulated liquid crystal display (L3C07U from EPSON) that had a resolution of 1920×1080 pixels and a pixel pitch of 8.5μm. We also used a 120mW semiconductor laser, at a wavelength of 532nm, as the light source. To generate the amplitude holograms, we took the real part of the complex amplitude on the hologram. The optical reconstructions from the holograms we thus obtained, through the random phase and proposed random phase-free methods, are shown in Figure 5(b). Our use of the scaled diffraction17 means that both reconstructions can be zoomed without using the zoom lens. The optical reconstruction obtained through our proposed method has a higher quality (lower speckle noise and a sharper image) than that obtained via the random phase method. Our proposed method is also effective for color image reconstructions.13 Lensless zoomable color reconstructions that we produced using the random phase method and the random phase-free method are shown in Figure 6, where the latter is clearly superior. 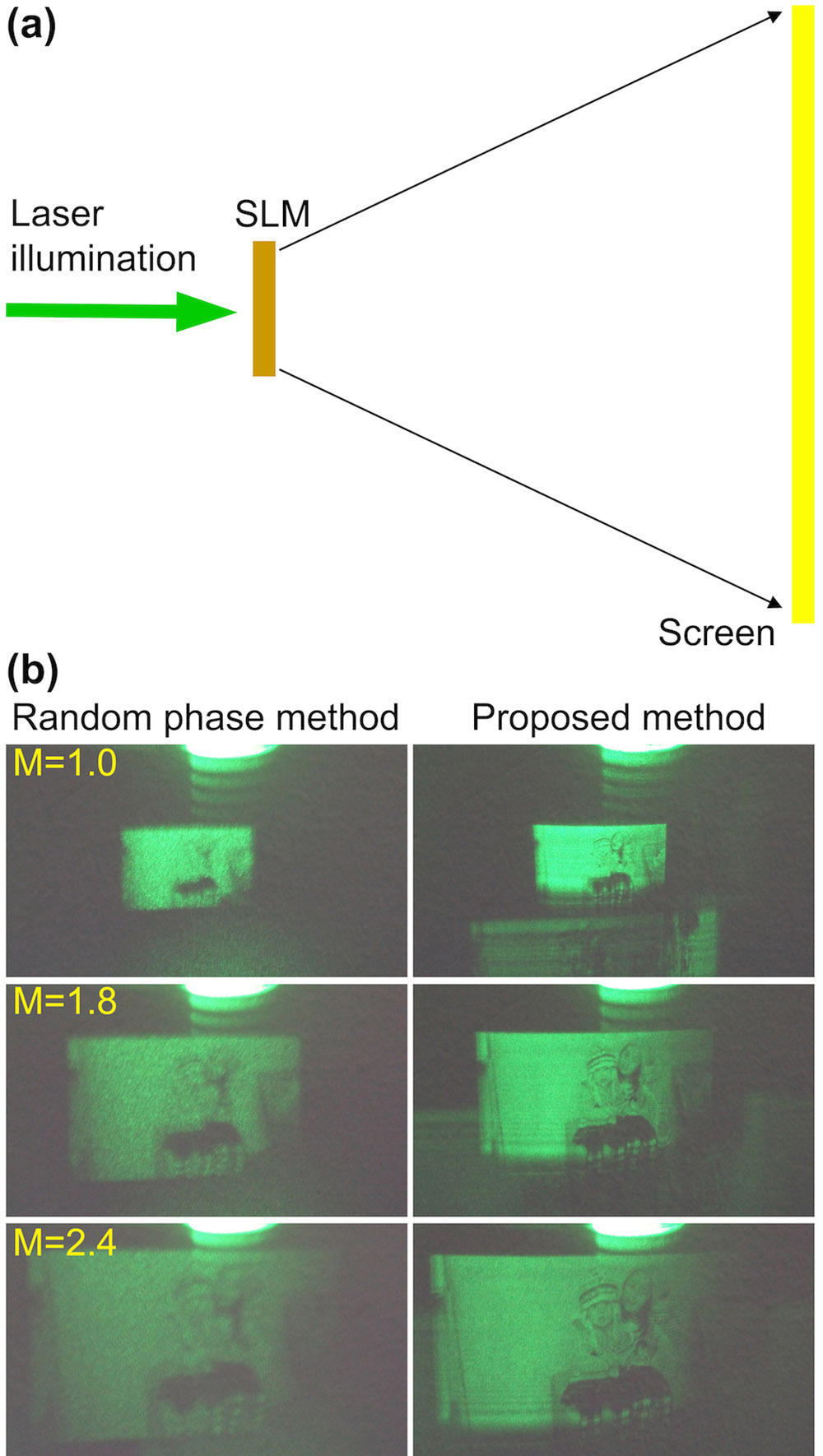 Figure 5. (a) Schematic diagram of lensless zoomable holographic projection. SLM: Spatial light modulator. (b) Lensless zoomable optical reconstructions from holograms obtained via the random phase and proposed phase-free methods. Magnification (M) values for each set of images are given. 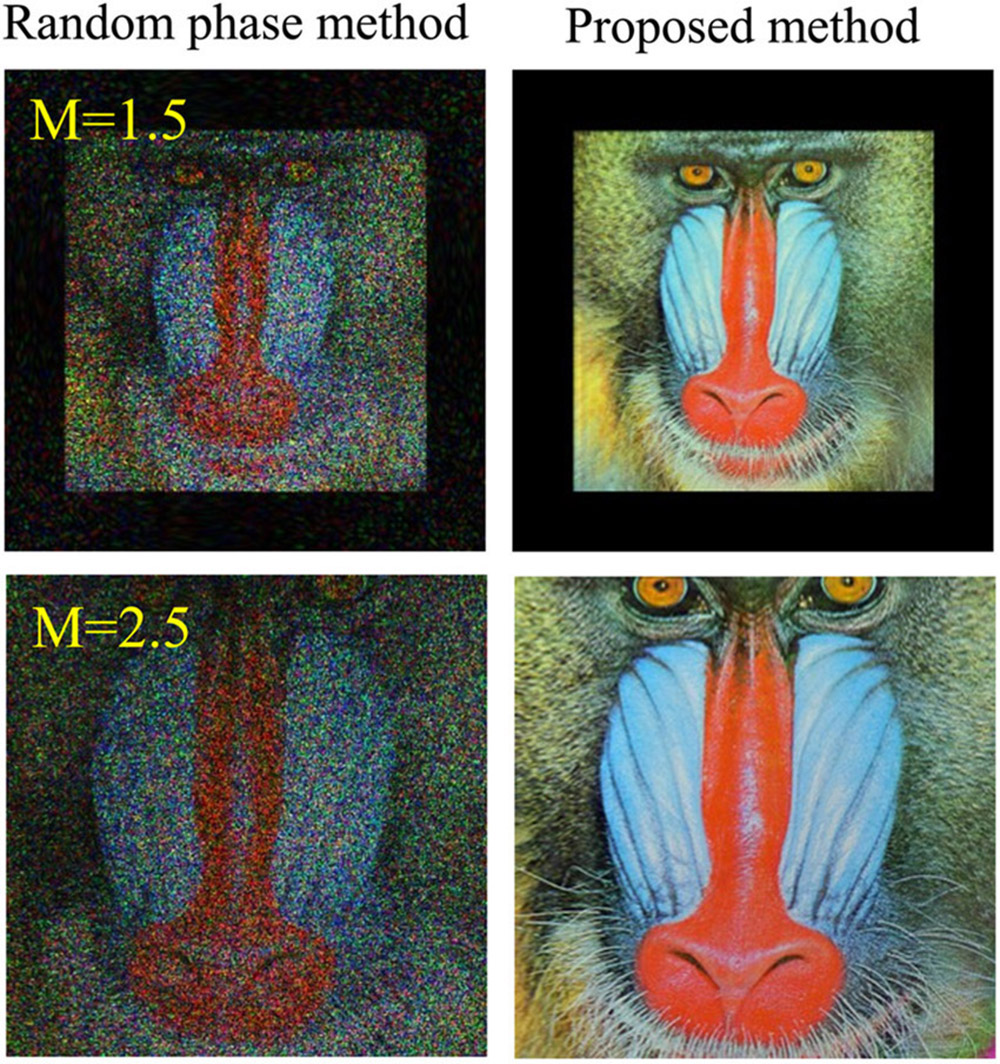 In summary, we have introduced a simple and computationally inexpensive method that can be used to increase the spatial resolution and reduce the speckle noise of computer-generated holograms. In our random phase-free approach, we multiply the object light with the virtual convergence light. We have also demonstrated the suitability and effectiveness of the technique for a number of applications. In our future work we will investigate the feasibility of our proposed method for holographic 3D display, encryption, and multiple-spot generation.

This work is partially supported by Japan Society for the Promotion of Science KAKENHI grants (16K00151 and 25330125). All of the results presented here were obtained using our numerical library for wave optics.18

Tomoyoshi Shimobaba received his PhD from Chiba University in 2002 and is now an associate professor. His research interests are computer holography and its applications. He is a member of SPIE, the Optical Society (OSA), the Optical Society of Japan (OSJ), the Institute of Image Information and Television Engineers (ITE), and the Institute of Electronics, Information, and Communication Engineers (IEICE).

Takashi Kakue is an assistant professor. He received his PhD from Kyoto Institute of Technology, Japan, in 2012. His research interests are holography, digital holography, computer holography, holographic interferometry, 3D imaging, high-speed imaging, and ultrafast optics. He is a member of OSA, IEEE, SPIE, OSJ, the Japan Society of Applied Physics, the Information Processing Society of Japan (IPSJ), the Laser Society of Japan, and ITE.

Tomoyoshi Ito is a professor. He received his PhD from the University of Tokyo, Japan, in 1994. His research interests are high-performance computing and its applications, such as electronic holography for 3D TV. He is a member of the Association for Computing Machinery, OSA, ITE, IEICE, IPSJ, and the Astronomical Society of Japan.