A novel synthesis method provides nanoparticles that are terminated with carbonate-like groups and creates an amorphous/crystalline structure for effective separation of electron-hole pairs.
12 August 2016
Lihong Tian and Xiaobo Chen

Harvesting of solar energy through the technique of semiconductor photocatalysis is a promising approach for solving the current energy crisis and problems of environmental pollution.1 For the purposes of photocatalysis, titanium dioxide (TiO2) is one of the most important and widely studied inorganic semiconductor materials. Although TiO2 has a large band gap (about 3.2eV), it only responds to UV light (which comprises less than 5% of natural sunlight).2 It is therefore necessary to find ways to increase the efficiency of TiO2 photocatalysis for energy applications.

A number of previous attempts have been made to enhance the photocatalytic performance of TiO2 in the visible light region (which accounts for about 43%) of natural sunlight). These have included the introduction of an alien atom (metal or non-metal element) into the TiO2 lattice,1 loading noble metal nanoparticles,3 forming composites,4 and tuning surface defects.5 In addition, mesoporous nanomaterials have attracted a large amount of attention because of their large surface areas and well-defined porous structures.6 In traditional methods for the synthesis of mesoporous TiO2, templates are required to form the mesoporous structure.7, 8 Furthermore, post-synthesis treatments are necessary to increase the crystallinity and to remove the templates. These late-stage processes, however, can cause the aggregation of particles and the collapse of the mesoporous structures (i.e., because of the template removal) and thus reduce their photocatalytic activity. More simple approaches are therefore required for the preparation of mesoporous TiO2 with high photocatalytic activity in visible light.

In our work, we have developed a simple solvothermal method, without the use of templates, for the synthesis of mesoporous TiO2 nanoparticles that are terminated with carbonate-like groups. In our process, titanium tetrachloride reacts with ethanol to produce titanium ethoxide and then the network of titanium–oxygen (Ti–O) bonds for TiO2.9 We then introduce the carbonate-like groups to the Ti–O bonds in a sol-gel process. In this way, we are able to form a disordered layer that covers the crystalline core (i.e., the amorphous/crystalline structure) and that absorbs visible light (see Figure 1).10 The TiO2 samples obtained after annealing at various temperatures are labeled as TiO2-X, where X denotes the calcination temperature. We are also able to maintain the mesoporous structure, even after calcination at high temperature, and without concern of structural collapse caused by template removal. 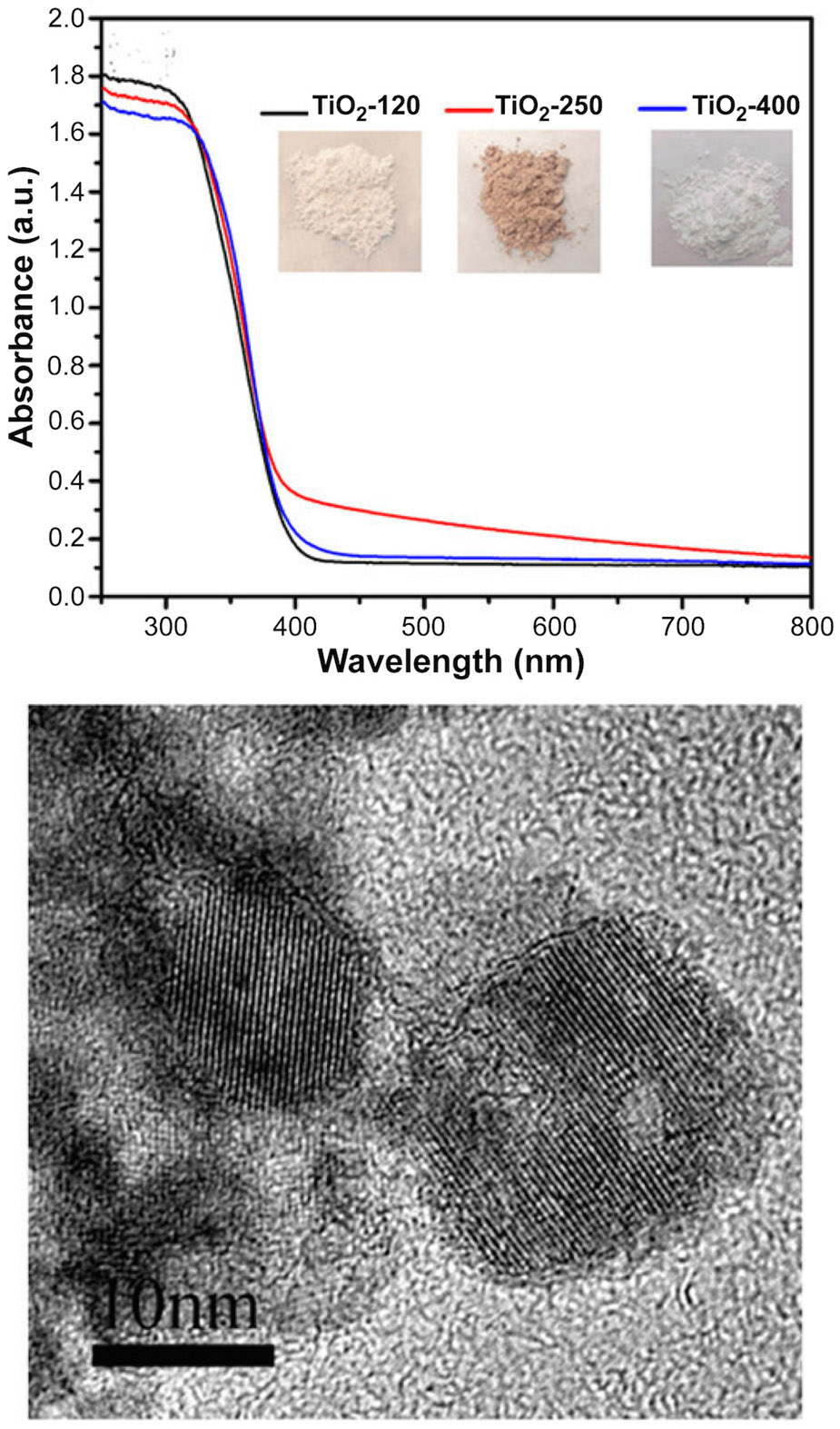 We tested the photocatalytic performance of our TiO2 samples by using them to degrade rhodamine B and colorless salicylic acid, under visible light illumination (with wavelength of more than 420nm). In these tests, we measured the concentration changes over time and calculated the percentage of degradation. Meanwhile, we also measured the photocurrent that is produced during the photocatalytic process so that we could compare the efficiency of charge separation between the samples. In addition, we measured the fluorescence from 2-hydroxyterephthalic acid, produced by adding terephthalic acid (TA), to determine the number of hydroxyl radicals produced in the photocatalytic pro cess. Our results—see Figure 2(a)—indicate that the TiO2 samples terminated with carbonate-like groups (e.g., TiO2-250) exhibit a higher level of photocatalytic activity than the bare TiO2 samples (i.e., nitrogen-doped TiO2 used for comparison) during degradation. In addition, our detection of fluorescence from 2-hydroxyterephthalic acid—see Figure 2(b)—indicates that the amorphous/crystalline structure of our samples leads to efficient charge transfer and an increased level of hydroxyl radicals. 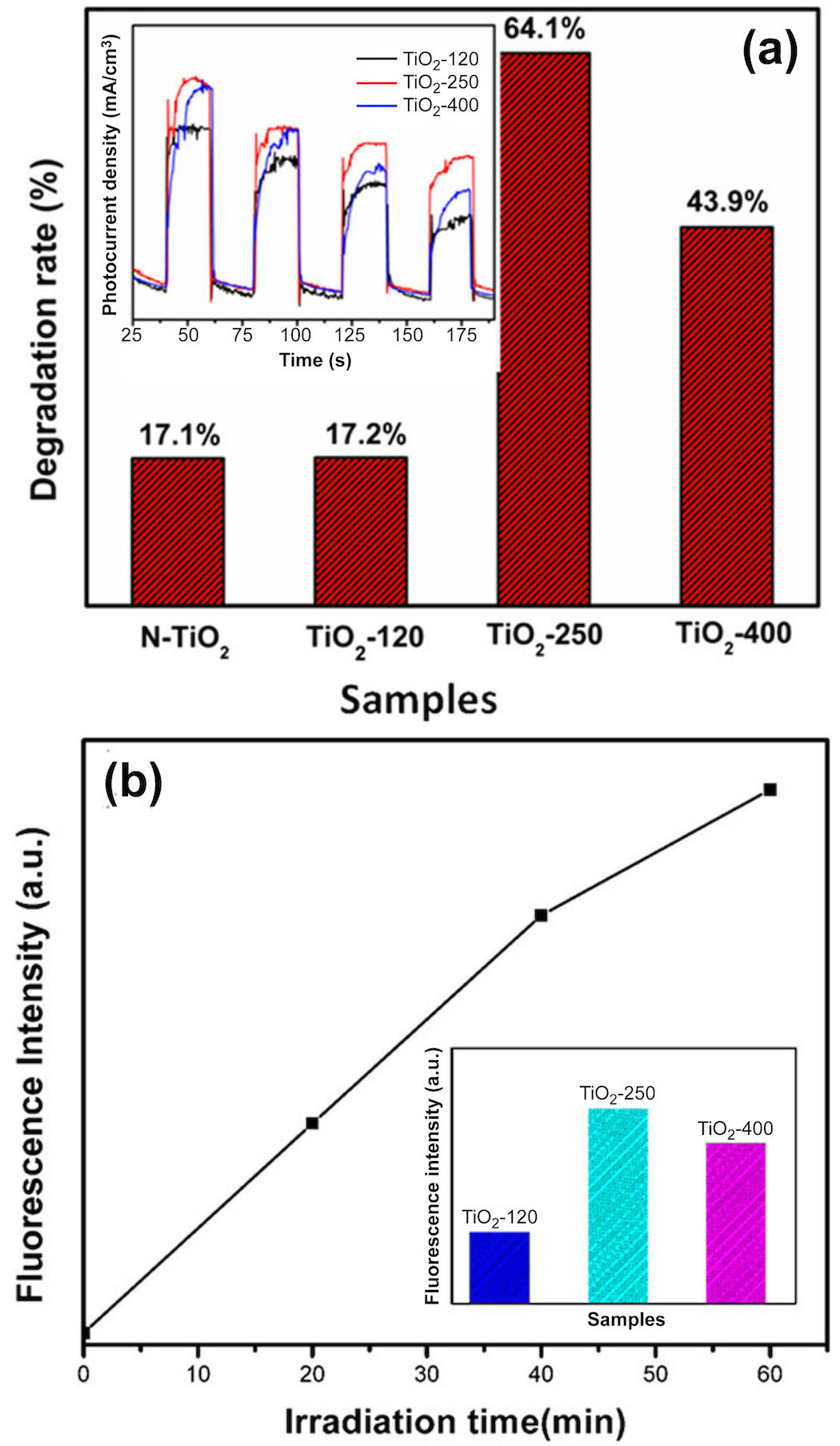 Figure 2. Top: Photocatalytic degradation, under visible light irradiation, of salicylic acid (over 180 minutes) by four different TiO2samples. N-TiO2: Nitrogen-doped TiO2. The inset shows the transient photocurrent response of each sample. Bottom: The induced fluorescence intensity of 2-hydroxyterephthalic acid (TA-OH) as a function of light illumination time for the TiO2-250 sample. The inset shows the amount of TA-OH adducted on all the samples after illumination by visible light for 60 minutes.

In summary, we have developed a new, simple, non-hydrolytic method for the synthesis of mesoporous TiO2 nanoparticles that are terminated with carbonate-like groups. With our methodology we thus form amorphous/crystalline TiO2 nanoparticle structures that have enhanced absorption in the visible light region and that give rise to high photocatalytic activity levels. Given the great photocatalytic performance for pollutant removal, and the feasible fabrication process, of the carbonate-modified TiO2, we now plan to explore its potential applications. For example, it may be used for the production of hydrogen from water using natural sunlight and for coating various building materials (to refresh air and thus control urban pollution).

Xiaobo Chen is an assistant professor.