Shared-aperture multifunctional planar systems (in which a number of tasks are performed concurrently) have recently been introduced in the field of phased array antennas, for radar applications.1 Indeed, these shared-aperture phased antenna arrays—see Figure 1(a)—are a promising way to increase functionality in photonics. Recent achievements in the fast-growing field of metasurfaces (i.e., metamaterials of reduced dimensionality) are particularly relevant because they provide a route to developing virtually flat optics. Such metasurfaces consist of a dense arrangement of small-scale resonant optical antennas. For example, in a phased antenna array, phase accumulators are arranged so that they form a wavefront (because of phase differences across the array). Light–matter interactions of individual nanoantennas therefore allow local light scattering properties to be controlled with these arrays. 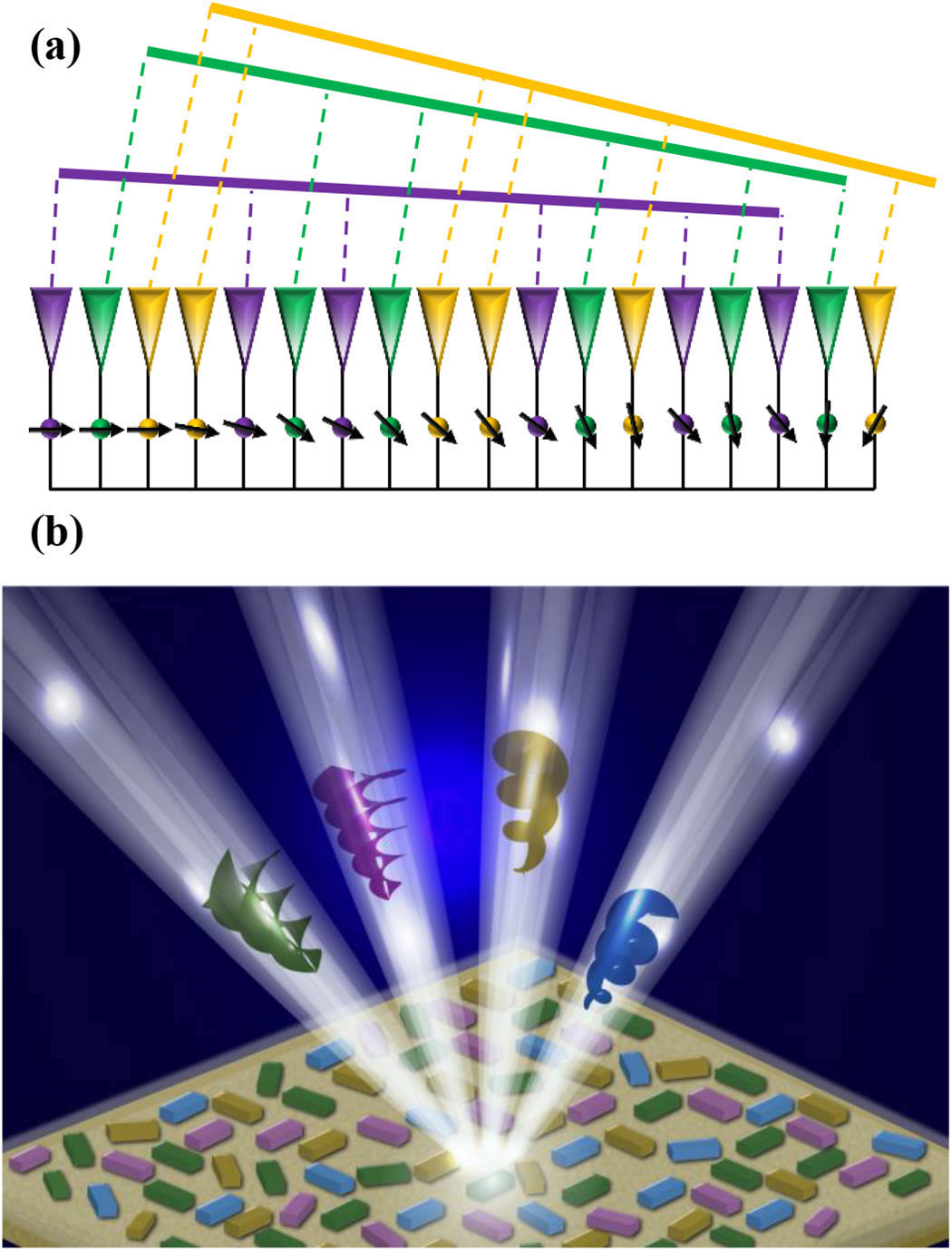 Figure 1. Schematic illustrations of (a) the shared-aperture concept and (b) structured wavefronts emerging from an interleaved geometric phase metasurface. In (a) each wavefront is represented by a different color. The wavefronts are illustrated with solid lines and the dashed lines indicate the propagation directions.

The local phase pickup in a phased antenna array can be manipulated by changing the antenna material, size, shape, and environment (known as antenna resonance shaping), or via the geometric phase concept. The latter concept is fundamental to geometric phase metasurfaces (GPMs), in which the phase pickup originates from space-variant orientations of the anisotropic nanoantennas that compose the metasurface. In addition, the geometric phase concept is an efficient way to achieve spin-controlled phase modulation, whereas the photon spin is associated with the intrinsic angular momentum of light.2–8 GPMs can also be used to transform incident circularly polarized light into a beam of opposite helicity (imprinted with a geometric phase).

In our work,9 we have used a new technique to synthesize shared-aperture phased antenna arrays. We combine these arrays with the geometric phase concept to realize multifunctional GPM photonic arrays. In addition, we have incorporated spin-controlled 2D optics (based on gap-plasmon nanoantennas) to produce interleaved nanoantenna matrices, as shown in Figure 1(b). We have also demonstrated various functionalities on a single GPM, which is applicable for use in medicine and chemistry.

We designed our photonic GPM, with spatially interleaved phase profiles, by randomly mixing optical nanoantenna subarrays. Each of these subarrays provides a different phase function, in a spin-dependent manner. With this approach we take advantage of the peculiar characteristic of random patterns for yielding extraordinary information capacities. We also use the geometric phase concept to control the polarization helicity. Furthermore, in our harmonic response approach, we exploit the expansion of a complex function to its harmonics so that we can generate multiple wavefronts. We have thus applied both these techniques to nanoantenna arrays to obtain multiple wavefronts, e.g., vortex beams that carry orbital angular momentum information.9

Metasurfaces with well-established sub-wavelength interleaved phased arrays based on multiplexed GPMs are now being developed for real-world applications. For instance, we have created a novel device for the simultaneous determination of the polarization state and spectrum of light. This device—known as the spectropolarimeter metasurface (SPM)—is illustrated schematically in Figure 2(a). The SPM measurement setup involves a continuum light beam passing through a cuvette (with a chemical solvent) to illuminate the device. Four light beams, with different intensities, are then reflected toward a CCD camera for measurement.

Figure 2. Illustration of the spectropolarimeter metasurface (SPM). (a) The measurement setup for the device. The SPM is illuminated by a continuum light that passes through a cuvette (with a chemical solvent). Four beams (L45, L0, σ+, and σ-) with different intensities are then reflected toward a CCD camera. L45and L0 are projections of the reflected beam upon linear polarization at 45 and 0°, respectively. σ+ and σ- are projections of the reflected beam onto the right- and left-circular polarization states, respectively. The building block of this metasurface is a gap-plasmon nanoantenna.10 The inset shows the left- and right-handed versions of a chiral molecule, where R represents the stereocenter configuration of the compound. (b) The optical rotatory dispersion (ORD) for specific rotation of D- and L-glucose (i.e., right- and left-handed glucose), measured using the SPM. The blue line shows D-glucose ORD literature values.

We have successfully used our SPM to measure the optical rotary dispersion of L-glucose and D-glucose (i.e., left and right chiralities) and to thus characterize and differentiate between these two enantiomer types, as shown in Figure 2(b). Distinguishing between these two types of glucose is important because mammals have enzymes that break down D-glucose, but not L-glucose (i.e., only the D enantiomer is biologically active). Moreover, because most biological molecules are chiral, enantomeric distinctions have widespread implications for the pharmaceutical and food industries. For example, the drug thalidomide was based on a chiral molecule. One of its enantiomers can relieve the effects of morning sickness, but the other enantiomer harms fetal development. Our SPM has a size of 50μm and can thus be integrated into advanced small diagnostics systems in medicine and chemistry.

In summary, we have developed a technique in which the geometric phase concept and shared-aperture antenna arrays can be combined. This work paves the way for spin-enabled multifunctional wavefront shaping, with the use of a single, broadband, and sophisticated nano-optic device. Our shared-aperture metasurface platform also opens a path toward novel types of nanophotonic functionality. For example, we have developed a device that enables integrated on-chip spectropolarimetric analyses. In the next stage of our work we plan to extend the shared-aperture metasurfaces to different spectral domains by making sophisticated nanoantenna designs.

Elhanan Maguid is a PhD student. His research is focused on multifunctional geometric phase metasurfaces.

Igor Yulevich is a PhD student. His research is focused on symmetry breaking by geometric phase metasurfaces.

Dekel Veksler is a PhD student. His research is focused on phased array geometric phase metasurfaces.

Erez Hasman is a Schlesinger Professor and head of the Micro and Nanooptics Laboratory. His research group has made significant contributions in the field of nanophotonics, specifically developing a new branch in optics known as spinoptics. He is also a fellow of the Optical Society.

Mark Brongersma is a professor in the Department of Materials Science and Engineering. He received his PhD in 1988 from the FOM Institute, Netherlands. Between 1998 and 2001 he was a postdoctoral research fellow at the California Institute of Technology. He is also a fellow of SPIE, the Optical Society, and the American Physical Society.