Grasping is an action that robots generally achieve through the use of simple parallel jaw grippers. However, the payloads and objects that are graspable with this technology are inherently restricted to the scales and geometries that match those of the gripper jaws. As an alternative approach, we have developed1 a novel ‘robot tongue’ that interacts with objects that have no defined location or shape.

Biological tongues exhibit an impressive range of functionality. Their robotic counterparts, featuring continuous and compliant backbones, are termed ‘continuum robots.’2, 3 The robot tongue discussed in this article is an example of a continuum robot that has a novel mechanical design.

Our research on continuously bendable and compliant robot tongues was initially focused on achieving adaptive grasping in unstructured applications, such as in space. However, the technology also has potential terrestrial applications. Such adaptable robot end effectors could be highly useful in areas of defense and security, teleoperation in hazardous environmental conditions, and even as an innovative option for traditional industrial automation.

We designed and built a novel prototype robot surface tongue for deployment at the end of a KUKA industrial robot manipulator (replacing the existing parallel jaw gripper). The resulting system augmented the precise positioning of the KUKA, and showed unique capabilities for adaptive grasping afforded by the new robot tongue (see Figure 1).

We demonstrated the tongue using a ‘spider’ made from a cut and frayed polyethylene terephthalate sleeve. We suspended the spider from the ceiling on a ‘web’ (a fishing line). The KUKA determined the approximate area of the spider's location, and was programmed with a simple sequence of points to reach that area quickly. We glued small magnets to both the end of the tongue and the inside of the spider to simulate stickiness. Images taken from a video of the experiment are shown in Figure 2. 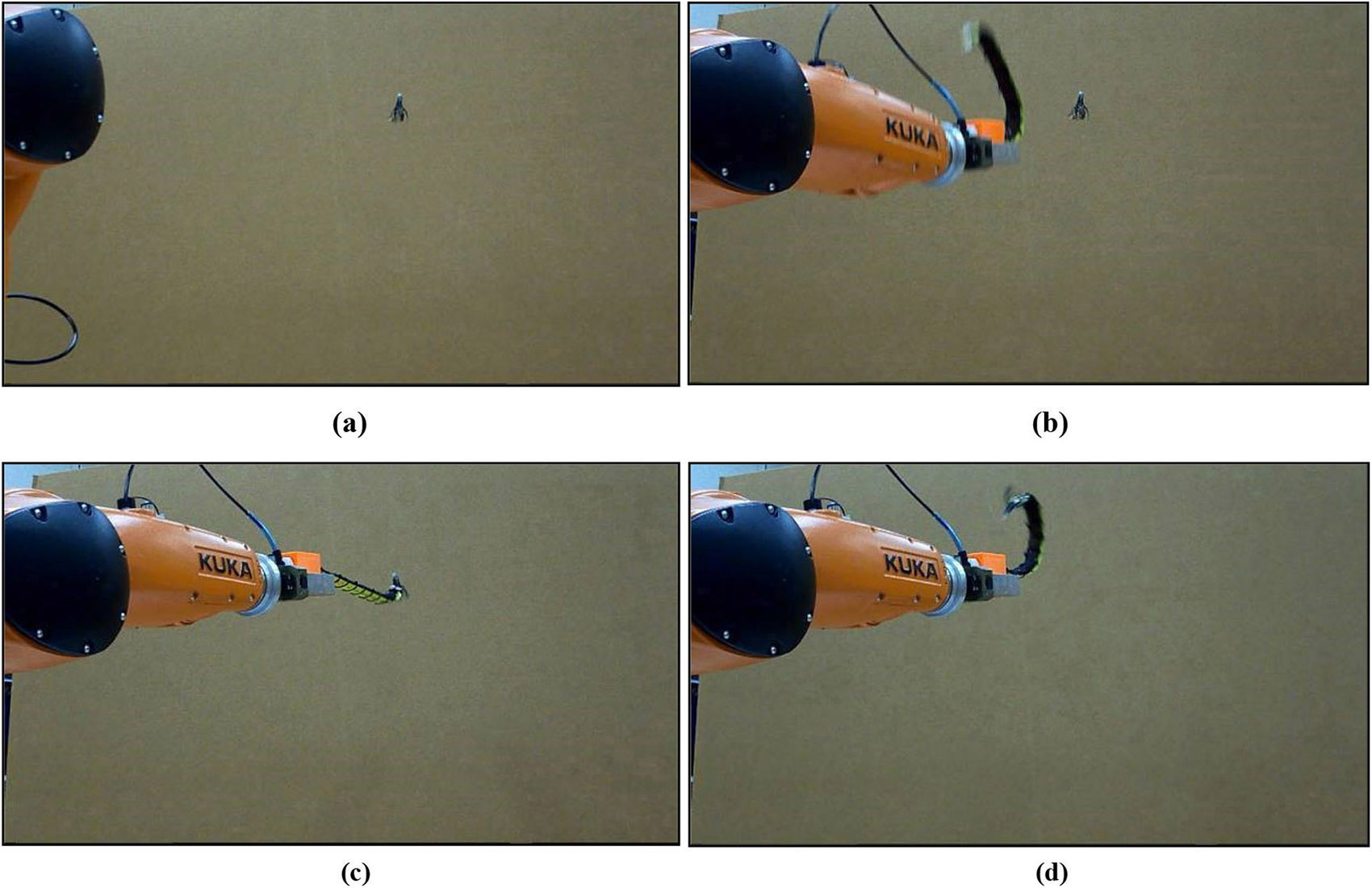 Figure 2. Snagging a synthetic ‘spider’ using the robot tongue. (a) Spider dangling from fishing line. (b) Robot tongue in position and extending toward the spider. (c) Moment of impact. (d) Pulling the spider back to the KUKA robot.

A conventional robot gripper would be unlikely to have the capability to position itself in a way that would make contact with the spider (hanging and swinging in an imprecisely known location) perfectly every time, even if it also possessed a magnet. The tongue, however, was more flexible. To achieve grasping it was important to align the spider along one axis (extending from the tongue base outward), but being a precise distance away from the target was not necessary. The unfurling function of the tongue quickly swept through a significant range of possible target coordinates.

In a second experiment, we threw a small towel into the robot workspace. What followed can be seen in Figure 3. As the towel arced through the air, the robot whirred into action and extended both itself and its tongue to catch the projectile object. While the tongue curled securely around the towel, the KUKA returned to its home position once again. 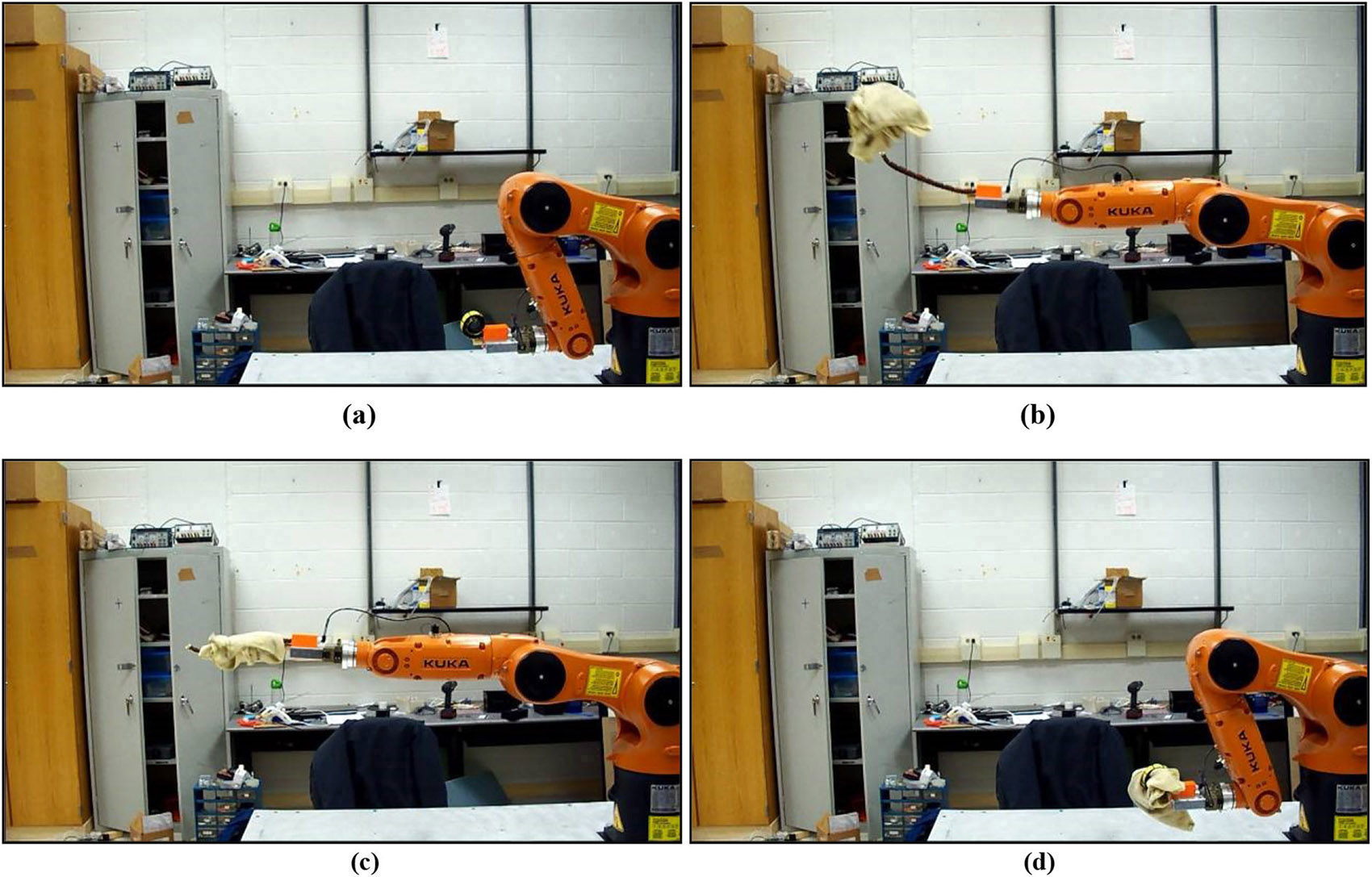 Figure 3. Catching a towel. (a) KUKA waits in home position. (b) KUKA arm and robot tongue extend to catch hand-thrown towel. (c) Towel lands along the length of the tongue. (d) Tongue retracts as KUKA returns to home position.

The chance of a conventional robot replicating this experiment is slim. In this experiment, the towel was thrown by a person. Thus, the trajectory was not identical each time the experiment was run. The tongue was critical in that it was both longer and less rigid than the parallel jaw gripper, providing better gripping ability over a larger area. While the parallel jaw gripper could technically grasp a towel, the towel would have to be oriented by hand into the gripper or secured such that its shape and location did not change.

The practical advantage of the tongue is the ability to grab an object that is previously undefined with regard to both shape and exact location. One target application for this technology is the space industry, with a specific example being the ‘soft’ retrieval of satellites. One terrestrial application would be an ability to wrap around and grasp cables or wires. Parallel jaw grippers provide only two points on contact. Depending on the strength of the grip, the grippers could damage the cable at those points. Using whole-arm grasping, robotic tongues would provide an even distribution of radial force, thus offering a safer grip.

In summary, we have described and discussed a novel type of robot tongue. The resulting robot structure represents a new form of continuous-backbone continuum robot. We deployed the tongue as an adaptable end effector on a conventional industrial robot manipulator, replacing the existing parallel jaw gripper. In testing and demonstrations, the hybrid rigid/continuum robot system was shown to provide an adaptive and compliant gripper. We are now working with researchers at the Florida Institute of Technology to demonstrate the use of a similar tongue prototype in simulated satellite capture experiments

The work in this article was supported in part by the US National Science Foundation under grant IIS-1527165, and by NASA under contract NNX12AM01G.

Ian Walker in a professor of electrical and computer engineering. His research focuses on biologically inspired robots.

Caleb Cohen received a BS in electrical and computer engineering at Clemson University in 2016.

Brandon Hiott received a BS in electrical and computer engineering at Clemson University in 2015.

Apoorva Kapadia is a visiting assistant professor of electrical and computer engineering. His research focuses on continuum robots.