Photodetectors are used to convert light into an electrical signal. They are at the heart of night-vision goggles,1 are the eyes of autonomous farming robots,2 and are used as sensors in applications ranging from medical diagnostic tools to consumer electronics. Although photodetectors are available for almost any desirable visible or IR wavelength, the sensitivity of these devices is limited, which makes it difficult to detect faint signals. One limitation of the signal-to-noise ratio comes from thermal excitation of electrons.3 This noise source can be reduced by decreasing the thickness of the photodetector, but this also reduces the absorption (i.e., the signal) and prevents net gains in the signal-to-noise ratio.

Research in nanophotonics has shown that light–matter interactions can be dramatically altered by carefully sculpting the nanoscale structure of a medium. For example, it has been shown that light can be absorbed very strongly in metamaterials composed of ultrathin, finely structured layers of metals and semiconductors.4, 5 The metallic constituents, however, lead to parasitic losses. These losses reduce the generated electric current (and the signal) and are thus incompatible with standard fabrication techniques, particularly at visible wavelengths.

In our work, as part of a collaboration of Australian researchers, we have been examining how strong light interactions—similar to those observed in metamaterials—can be engineered with relatively simple and easy to fabricate structures, and without the use of metals. In our structures, we etched narrow grooves into the absorbing (top) layer. This means that the vertically incoming light is directed sideways, so that the light travels through the layer over a long path length and has a greater chance of being absorbed (Figure 1). In this way, we recently demonstrated near-perfect absorption (meaning 100% of the incident light is absorbed, with zero reflection or transmission) in a semiconductor layer that is only 0.041μm thick (less than 1/15th the wavelength of the light).6 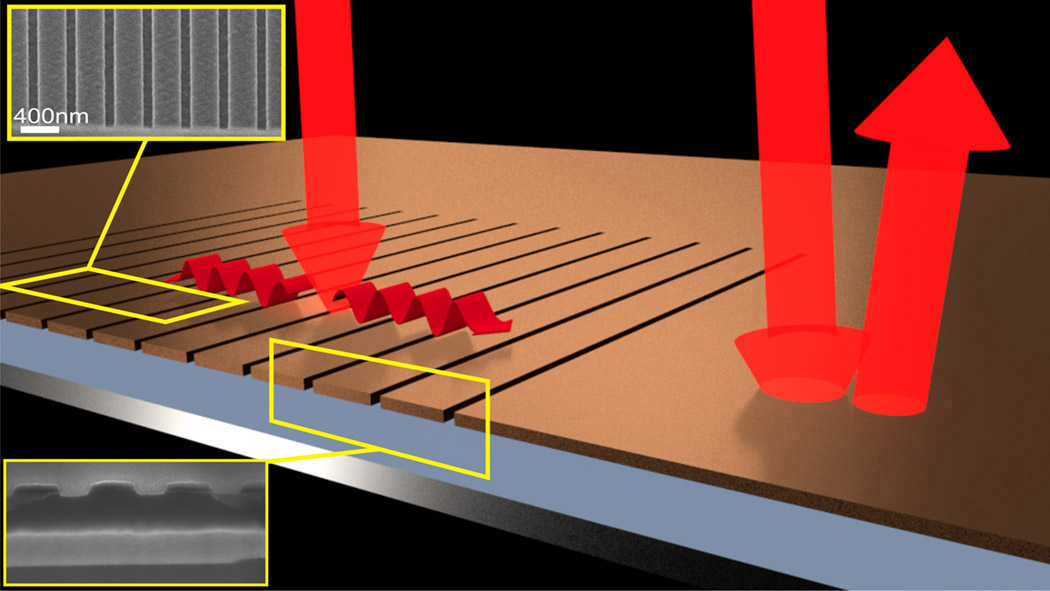 The quintessential property of diffraction gratings is that they give rise to diffracted orders of light. In other words, if light of wavelength λ is incident on a grating with period d at angle ϑ, then light is reflected at angles of −ϑ+mλ/d (where m is an integer). In our perfect absorber structures, we use a diffraction grating as both the absorbing medium and the coupling element. The grating diffracts light at approximately 90°, causing it to travel parallel to the surface in either a waveguide mode (if the real part of the material's dielectric constant, ∊, is more than zero) or as a surface plasmon polariton (if the real part of ∊ is less than 0), so that the absorption can be significant. To achieve maximal absorption, the thickness, period, and volume fraction of the grating must be carefully designed so that the incident light is ‘critically coupled’ to the leaky (almost bound) mode of the layer (i.e., the rate at which light is absorbed must exactly match the rate at which it is incident).

We fabricated a 41nm-thick antimony sulfide grating structure that we placed a precise distance (about a quarter of a wavelength) above a metallic reflector. The minimum feature size is close to 100nm even when it is used to target visible wavelengths around 600nm. It is thus possible to fabricate this grating using the standard technique of electron beam lithography. Using a confocal microscope, we measured a peak absorptance of 99.3% at a wavelength of 591nm, which is in excellent agreement with theory (Figure 2). A planar reference sample absorbs 7.7% at this wavelength. We also infer that the absorption within the grating is 98.7%, with only 0.6% absorbed by the silver mirror. 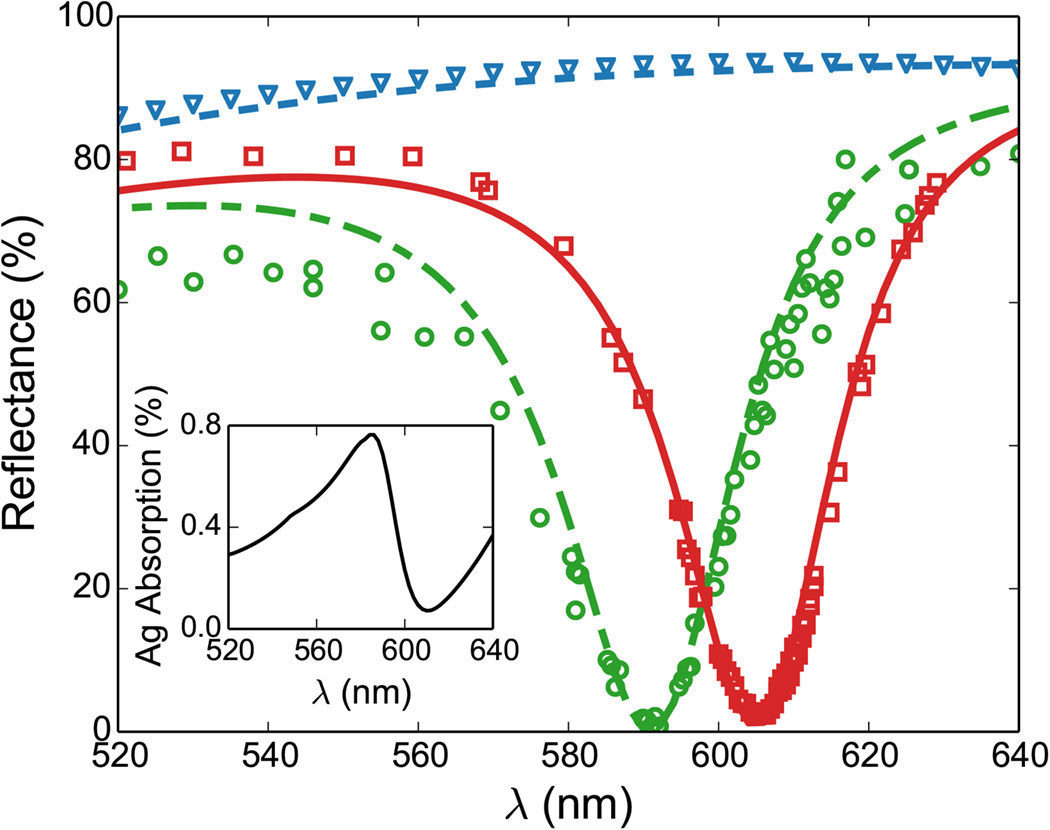 Figure 2. Reflectance of the fabricated gratings designed for total light absorption of transverse electric polarized light at a wavelength (λ) of 591nm (green) and 605nm (red), and of the planar reference structure (blue). The measured values (circles, squares, and triangles) and simulated predictions (dashed, solid, and dot-dashed curves) show excellent agreement, particularly in the vicinity of reflectance minima. The inset shows the simulated absorption in the silver (Ag) reflector (optimized for a λof 591nm) below the grating. (Image from Optica,4 reproduced with permission.)

Although we used only one specific material in our experimental demonstration, our analytic and numerical results (obtained by numerically solving the Maxwell equations with a combination of finite element and modal methods)7 show that perfect absorption can be achieved with a very wide range of commonplace semiconductors. There is no minimum intrinsic loss of the material, therefore perfect absorption can always be achieved (although the bandwidth of strong absorption becomes smaller as the material's intrinsic loss decreases). Another advantage of our approach is that it is straightforward to vary the absorption peak wavelength by adjusting the thickness of the top layer and the spacing of the rulings. In addition, the underlying physical principle is simple, robust, and widely applicable.

In summary, we have shown that carving grooves into a weakly absorbing semiconductor can increase its absorption to nearly 100% if the grooves are correctly proportioned. This suggests that the sensitivity of photodetectors of any target wavelength can be increased. This is particularly important in the IR part of the spectrum (e.g., as used for night vision), where detectors currently require cooling to reduce noise. Our work also opens up the possibility of using new, affordable materials. Our next steps are to focus on the semiconductors used ubiquitously in the optoelectronics industry, which will allow us to rapidly realize applications of our structures.

Björn Sturmberg received his PhD from The University of Sydney in 2016, with his thesis ‘The Optical Physics of Dielectric Nanostructures: Enabling Improved Photovoltaic Designs.’ He has served as Vice President and President of The University of Sydney SPIE Student Chapter, and in 2014 he received a SPIE Optics and Photonics Education Scholarship.

Martijn de Sterke received his PhD from the University of Rochester, and is now a professor of physics. He is a theorist whose research interests include guided-wave optics, nonlinear optics, and solar energy.