Hexagonal boron nitride (hBN) is a wide bandgap semiconductor. Owing to its low dielectric constant, high thermal conductivity, and chemical inertness, hBN is used in a large range of basic applications, e.g., devices that are operated under extreme conditions. In recent work,1 the growth of high-quality hBN crystals revealed—from lasing at 215nm by accelerated electron excitation—that hBN is also a promising material for deep-UV LEDs. Furthermore, it has been shown that hBN can be used for the operation of field-emission-display-type devices in the deep-UV.2 Bulk hBN (also known as white graphite) has a honeycomb structure that is similar to graphene, and has recently gained a large amount of attention, e.g., as an exceptional substrate for graphene (with an atomically smooth surface) and as a fundamental building block of van der Waals heterostructures.3 Despite this growing interest, and the simple structure of hBN, there remain several basic questions over the nature of its bandgap.

Previously obtained optical measurements of hBN suggest that is has a direct bandgap.1 These results, however, are in contrast to those of ab initio calculations from which it has been concluded that the band structure of hBN includes an indirect bandgap.4–6 All theoretical studies predict that—within the Brillouin zone of hBN—the conduction band minimum and the valence band maximum are located at different high-symmetry points (i.e., the ‘M’ and ‘K’ points for the conduction and valence states, respectively), but these results contradict the findings from optical spectroscopy experiments.

In our recent work,7 we conducted a two-photon spectroscopy study of hBN in the deep-UV regime to investigate its bandgap structure. In these experiments we detuned the laser at about half the bandgap, which led to the subsequent suppression of the laser's stray light (i.e., which is present in one-photon spectroscopy). In this way, we were thus able to observe previously unreported lines. From our analysis of the energy spacing of all the emission lines, we concluded the presence of phonon replicas (phonon-assisted recombination lines).

From our results (see Figure 1), we demonstrate that emission lines above 5.7eV in hBN—which are usually called the ‘S series’—are actually phonon replicas. As hBN is an indirect bandgap semiconductor, with conduction (valence) band extrema at the M and K points, radiative recombination must be assisted by the emission of phonons (with wave-vectors, MK) so that momentum is conserved. In addition, the emission bands we observe at 5.76 and 5.86eV (see Figure 1) correspond to recombination that is assisted by optical and acoustic phonons, respectively. More precisely, the 5.76eV emission band involves longitudinal and transverse optical phonons (around the ‘T’ points, i.e., located in the middle of the Brillouin zone) and gives rise to the longitudinal optical phonon (XLO) and transverse optical phonon (XTO) replicas. Similarly, at about 5.86eV, longitudinal and transverse acoustic phonons are associated with the longitudinal acoustic phonon (XLA) and transverse acoustic phonon (XTA) replicas. The fine structure of our observed replicas, however, remains unclear. It is possible that zone-folding effects in multilayer segments (with different thicknesses) could be an explanation. We also note that in the phonon-assisted recombination process, the Xμ notation for each replica (where X stands for replica, and μ is the phonon mode) can be interpreted as a ‘virtual’ state (i.e., which occurs as the energy of the emitted photon). 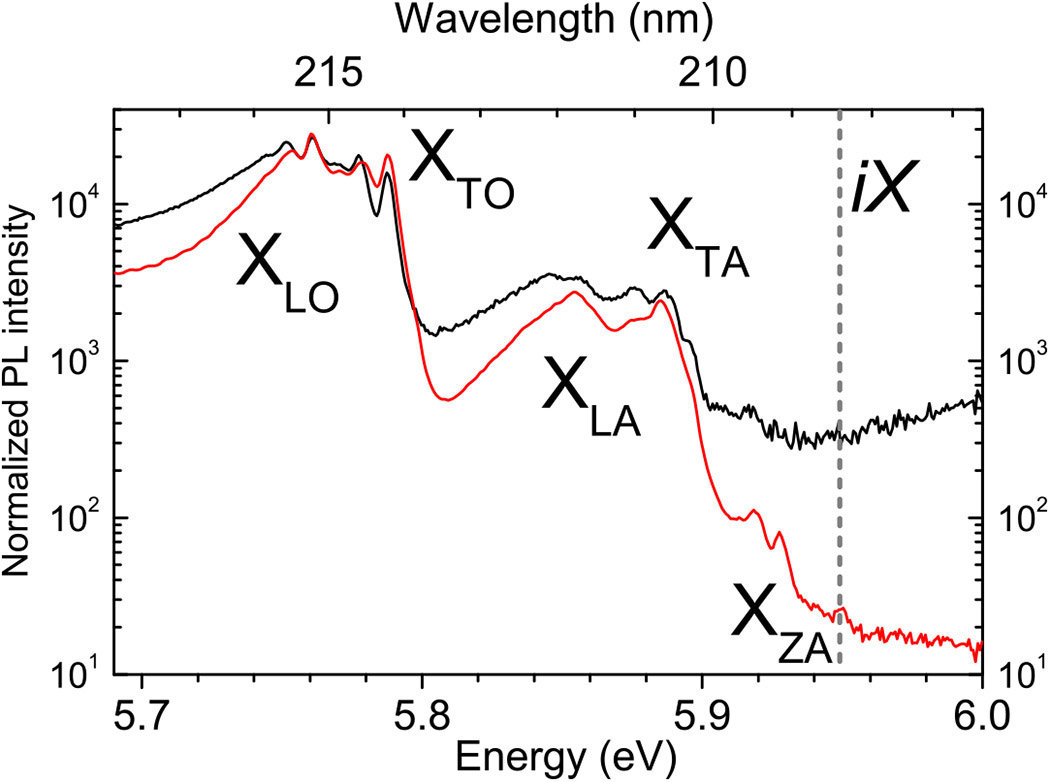 Previous spatially resolved cathodoluminescence measurements have shown that the hBN emission lines below 5.7eV—usually known as the ‘D series’—are related to hBN defects. We have demonstrated (see Figure 2)8 that the phonon cascade from the indirect exciton is not limited to one-phonon processes, and that two-, three-, and four-phonon-assisted recombination lines show up in the defect-related emission band (around 5.5eV). The lines at 5.62 and 5.47eV correspond to phonon-assisted recombination lines. These require an optical phonon to reach the virtual excitonic state—XLO(T)/TO(T)—as well as one or two TO(K) phonons, respectively. For the phonon replicas that emerge in the defect-related emission band, we find that a modified notation, i.e.,

, is more appropriate (than for the XLO(T)/TO(T) phonon replica) because in this case the real electronic states lie at the energy of the emitted photon. Furthermore, the

replica appears to overlap with the donor-acceptor pair recombination line. 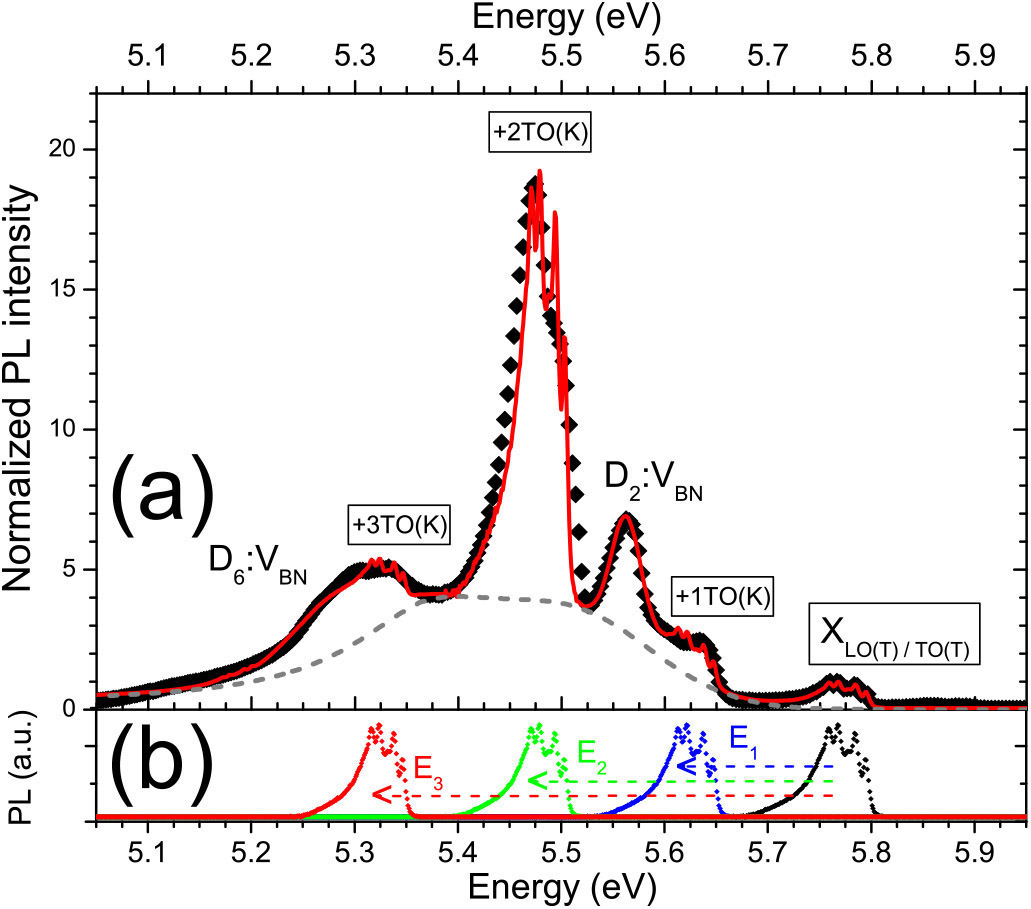 Figure 2. (a) Photoluminescence signal intensity from hBN, with a line of best fit (solid red line). The lines labeled as D2 and D6are attributed to the boron nitride divacancy (VBN). (b) Emission spectrum of the virtual excitonic state—XLO(T)/TO(T)—line at 5.76eV (black) and its three replicas used to fit the data in (a). These replicas were obtained by applying the rigid energy shifts E1, E2, and E3 (blue, green, and red, respectively) and the corresponding TO(K)-assisted intervalley scattering. T and K represent the ‘T’ and ‘K’ points within the Brillouin zone. a.u.: Arbitrary units.

We expect a transition to a direct bandgap semiconductor in hBN to occur at the monolayer scale (akin to transition metal dichalcogenides). This raises the issue of finding an appropriate substrate for a single layer of hBN. The lateral size of the samples is another challenging problem that we encounter, which will require going beyond exfoliation for the fabrication of few-layer hBN crystals. Metalorganic chemical vapor deposition and molecular beam epitaxy are promising alternative routes for the growth of wafer-scale samples, but these techniques are both still in their infancy for hBN.

In summary, we have investigated the nature of the bandgap in hexagonal boron nitride. We have used two-photon spectroscopy and spatially resolved cathodoluminescence measurements to demonstrate that the optical properties of hBN are profoundly affected by phonon-assisted optical transitions. This is a result of the indirect nature of the bandgap (within the material's layered structure). We are now investigating the modification of these optoelectronic properties in few-layer hBN samples, with a particular focus on the change in the phonon-assisted recombination processes.

This work was supported financially by the GaNeX network (ANR-11-LABX-0014). GaNeX belongs to the publicly funded Investissements d'Avenir program, which is managed by the French National Research Agency (ANR). Guillaume Cassabois is a member of the Institut Universitaire de France.