Geodetic discovery of a new magma body beneath New Zealand

Magma plays a fundamental role in the formation of new crust on Earth. Along mid-ocean ridge systems, for example, the build-up of stress (caused by the separation of tectonic plates) is relieved through the injection of vertical sheets of magma (known as dikes) during rifting episodes. In addition, at arc and back-arc settings—where subduction of oceanic lithosphere gives rise to magmatism and volcanism—the accumulation of magma helps build new continental crust. In most cases the magma remains at depth, where it eventually cools to form new rock. In rare occasions, however, the material may erupt in very large caldera-forming events or in supereruptions (i.e., when more than 1000km3 of material may be expelled).1 Although rifting episodes and the emplacement of magma beneath oceanic spreading centers is relatively well constrained,2, 3 there are only a few regions in arc and back-arc settings where significant volumes of magma are produced. It is therefore difficult to study the complex interactions between volcanism, tectonics, and magmatism in these settings.

Geophysicists can employ a number of techniques to study the geometry, location, and volume of magma being intruded into the Earth's crust. As a result of such intrusions, the surrounding rocks deform and cause small displacements of the ground surface. Geodetic observations, such as from global positioning system (GPS) and satellite radar interferometry (InSAR) measurements, can be used to quantify these displacements. The deformation may also be accompanied by changes in the magnitude and frequency of earthquakes that can be detected by seismology. Furthermore, magnetotelluric (MT) techniques can be used to image the electrically conductive magma bodies.

In this study,4 we present geodetic and seismological data from the Taupo Volcanic Zone (TVZ), in New Zealand's North Island, and provide evidence of a new magma body below the surface. The TVZ (see Figure 1) is an active continental rift and arguably the world's most productive region of silicic volcanism.5 Along the TVZ, conductive bodies—imaged at depths of about 6–10km—are thought to be zones of interconnected melt.6 These observations are consistent with geodetic measurements that show widespread subsidence, and which suggest the cooling and contraction of magma within the shallow crust.7 At the northern end of the subaerial TVZ (in the Bay of Plenty region), swarms of earthquakes (see Figure 1) have been detected since the 1970s. The cause of these earthquake swarms, however, has remained largely unresolved. 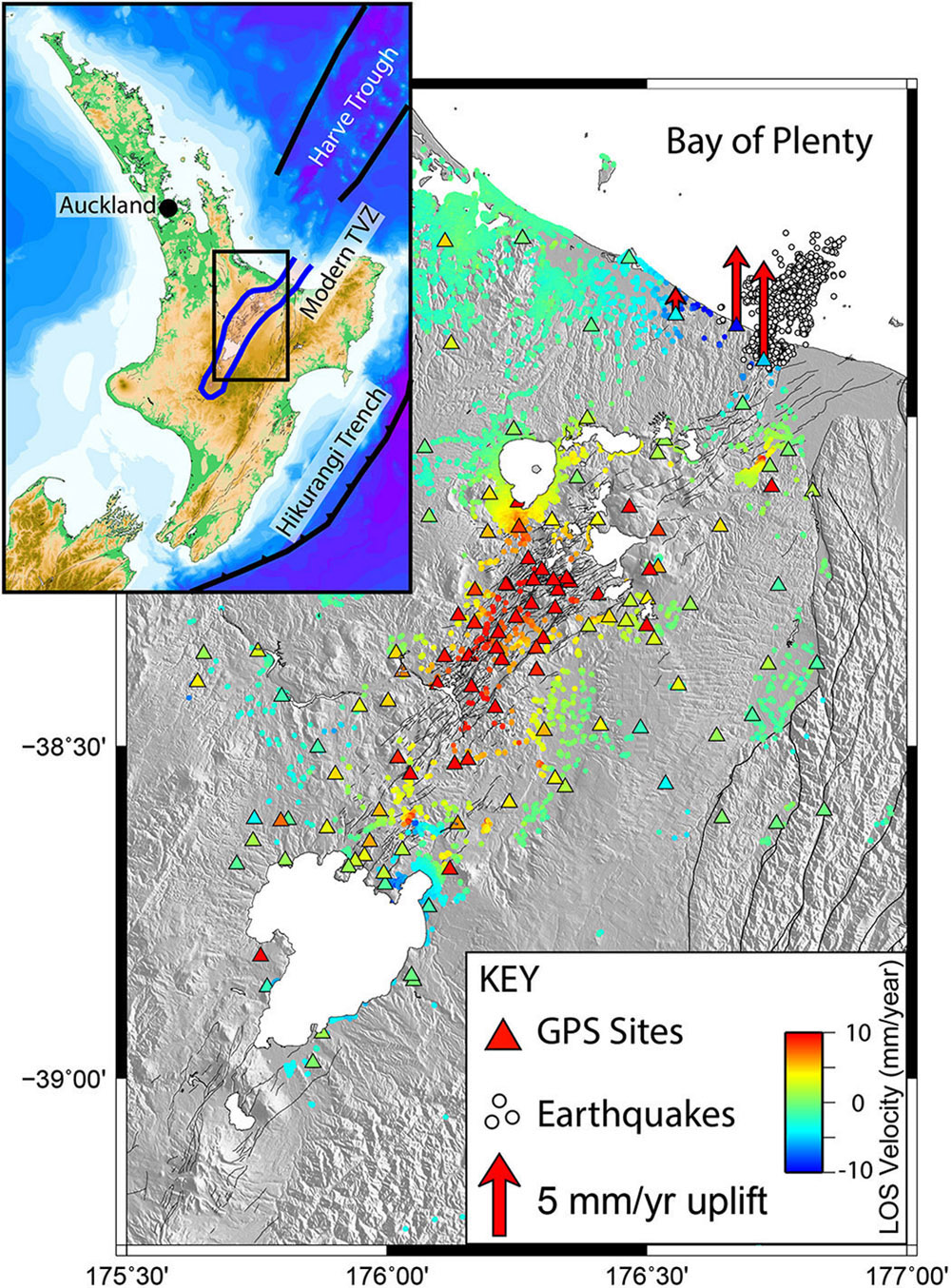 Figure 1. Surface velocities (i.e., measurements of displacement) derived from satellite radar interferometry (InSAR) and global positioning system (GPS) measurements (indicated by the colored circles and triangles, respectively). Warm colors indicate subsidence and blue colors suggest uplift. The white circles show the location of earthquakes during a swarm between 2005 and 2009 (in the Bay of Plenty region). The inset shows a map of New Zealand's North Island, and the black box indicates the region shown in the main figure. TVZ: Taupo Volcanic Zone. LOS: Line of sight.

With the use of InSAR and GPS data to measure the surface deformation across the northern TVZ, we have detected an ∼300km2 region of uplift on the edge of the currently active volcanic zone. Both our InSAR and GPS measurements show that the region was undergoing uplift at a rate of about 10mm/year between 2004 and 2011 (see Figure 1). Despite the swarms of earthquakes in the region, the pattern of deformation points toward a magmatic, rather than a tectonic, origin.

We have also used a simple elastic model to represent an inflating body of magma and thus determine the source geometry and volume of the detected body. We found that our observations are best explained by the inflation of a horizontal, about 20 × 25km, magmatic body at a depth of 9.5km.4 We also estimate that between 2004 and 2011, 0.06km3 (i.e., 60,000,000m3) of new material was injected into the crust beneath the Bay of Plenty (see Figure 2). 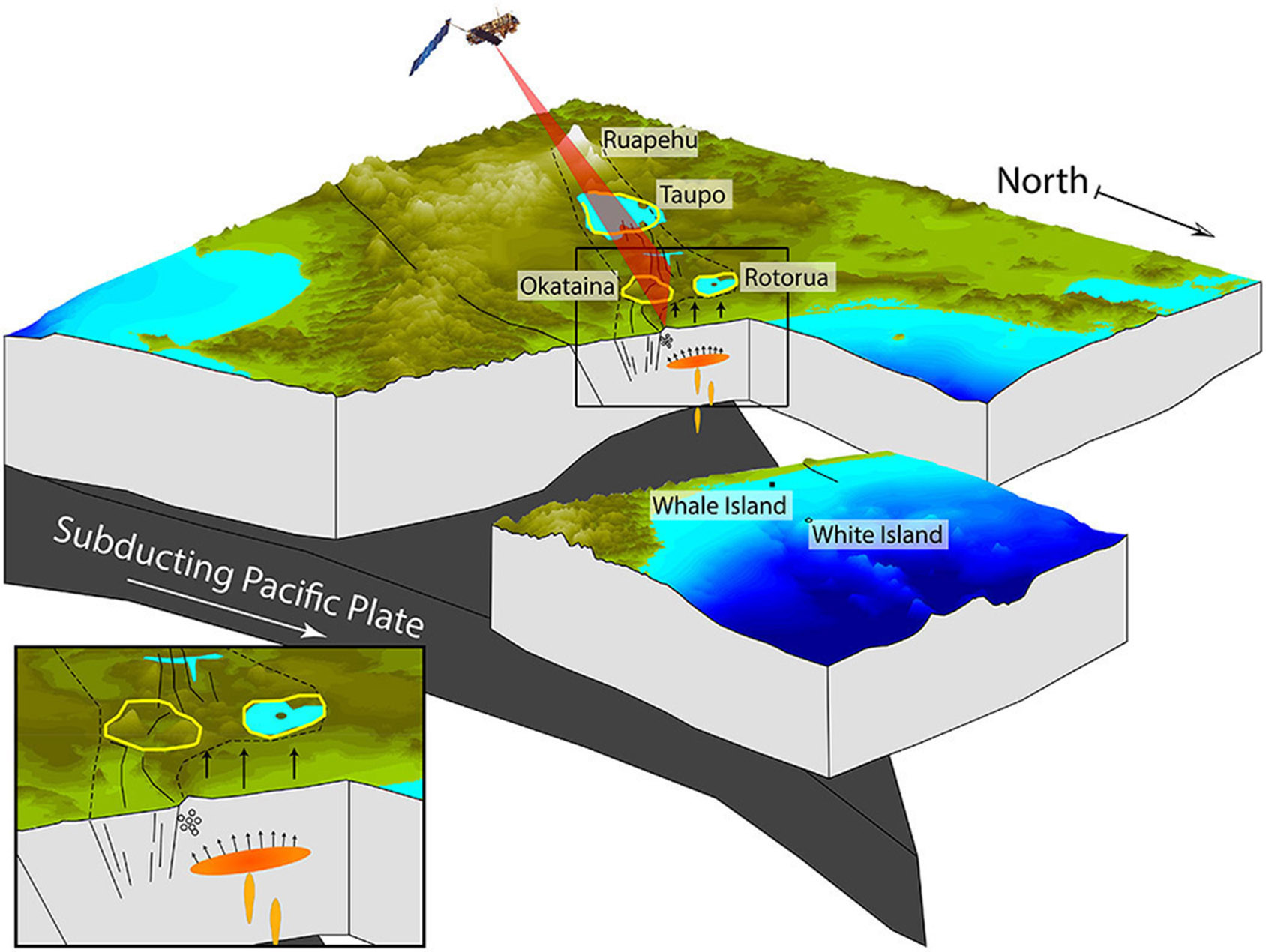 Figure 2. Schematic block diagram of a large-scale inflating body beneath the Bay of Plenty region, which results in crustal uplift along the coast and triggering of earthquake swarms in the Matata region. The figure shows the subducting Pacific plate beneath the North Island of New Zealand and the outline of the modern TVZ, with the main volcanic centers labeled.

Measurements from leveling lines (placed across the region between the 1950s and 1970s), and from other historical geologic data, also provide evidence that the region may have been undergoing uplift for up to about 1700 years. The inflation rate that we have observed during the 2000s, however, is more than double the long-term average. It is unclear whether this was caused by an isolated increase in the melt supply or whether the supply rate has varied with time. The repeated swarms of earthquakes detected in the area seem to indicate the latter option. In fact, a large, well-recorded earthquake swarm (which occurred between 2005 and 2009) was coincident with the observed increase in inflation rate. Our results thus provide evidence that the frequent earthquake swarms in the region occur in response to periodic increases in the magma supply from depth (see Figure 2).

In summary, we have used InSAR and GPS data to study the active Taupo Volcanic Zone beneath New Zealand's North Island. Although the ultimate fate of the magma in this region (which contains one of Earth's supervolcanoes) remains unknown, our results provide evidence for the birth of a new magma chamber. In the coming years we hope to expand our investigation with a focused deployment of GPS, MT sensors, and seismometers so that we can probe the size and eruptability of this magma body.

We thank the Japan Aerospace Exploration Agency for access to the Advanced Land Observing Satellite data (through project RA4-1093), the European Space Agency for access to the Envisat data (under project C1P-14029), and GeoNet for the continuous GPS data. This work was supported by public research funding from the Government of New Zealand, with additional support from the New Zealand Natural Hazards Research Platform (under grant 2015-GNS-02-NHRP) and Land Information New Zealand.

Ian Hamling is a geophysicist whose main interests involve the use of satellite radar data for measuring and modeling deformation of the Earth's surface.