Quantum dot photosensitizers as a new paradigm for photochemical activation

In this work,5 we have investigated the possibility of using quantum dots as effective alternatives to molecular triplet photosensitizers. With our experiments, we show definitively that triplet energy transfer proceeds rapidly and efficiently from energized semiconductor nanocrystals to surface-anchored molecular acceptors. In particular, we find that cadmium selenide (CdSe) quantum dots can serve as effective surrogates for molecular triplet sensitizers and can easily transfer their triplet excitons to organic acceptors (see Figure 1). These semiconductor nanomaterials are thus highly suited to energy-conversion applications. 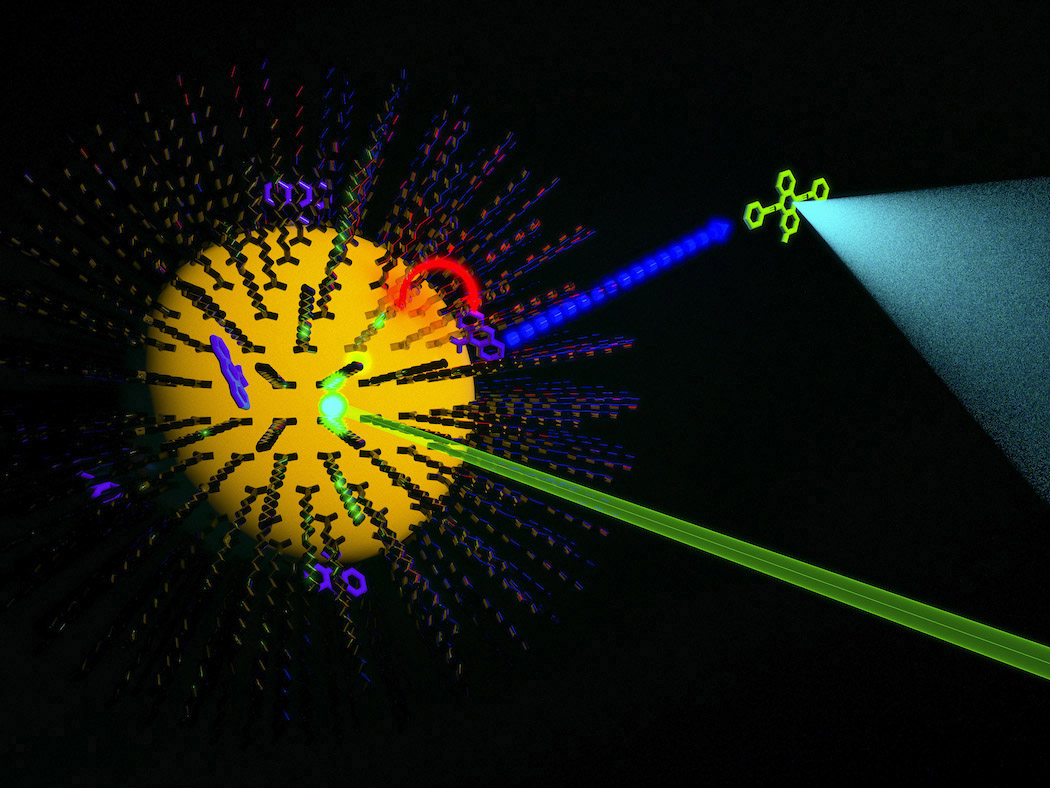 The nanoparticle-to-solution triplet exciton transfer methodology we used in our experiments is shown in Figure 2. Quantum dots are typically capped with a ligand shell, and in our experiments we used oleic acid (OA) to ensure solubility of the dots (while also preventing inter-particle aggregation). This ligand periphery also serves as an insulating layer that prevents collisional quenching with the freely diffusing molecules in the solution. As a consequence, bimolecular energy transfer cannot proceed in the solution within the approximately 30ns-lifetime of CdSe excitons. To circumvent this limitation, we modified the CdSe surfaces by replacing some of the native OA ligands with molecular triplet acceptors that bear a carboxylic acid moiety, e.g., 9-anthracene carboxylic acid (ACA). We then purified the resultant nanocrystals by successive preciptation/centrifugation washing cycles that provided the desired donor/acceptors (termed CdSe/ACA). 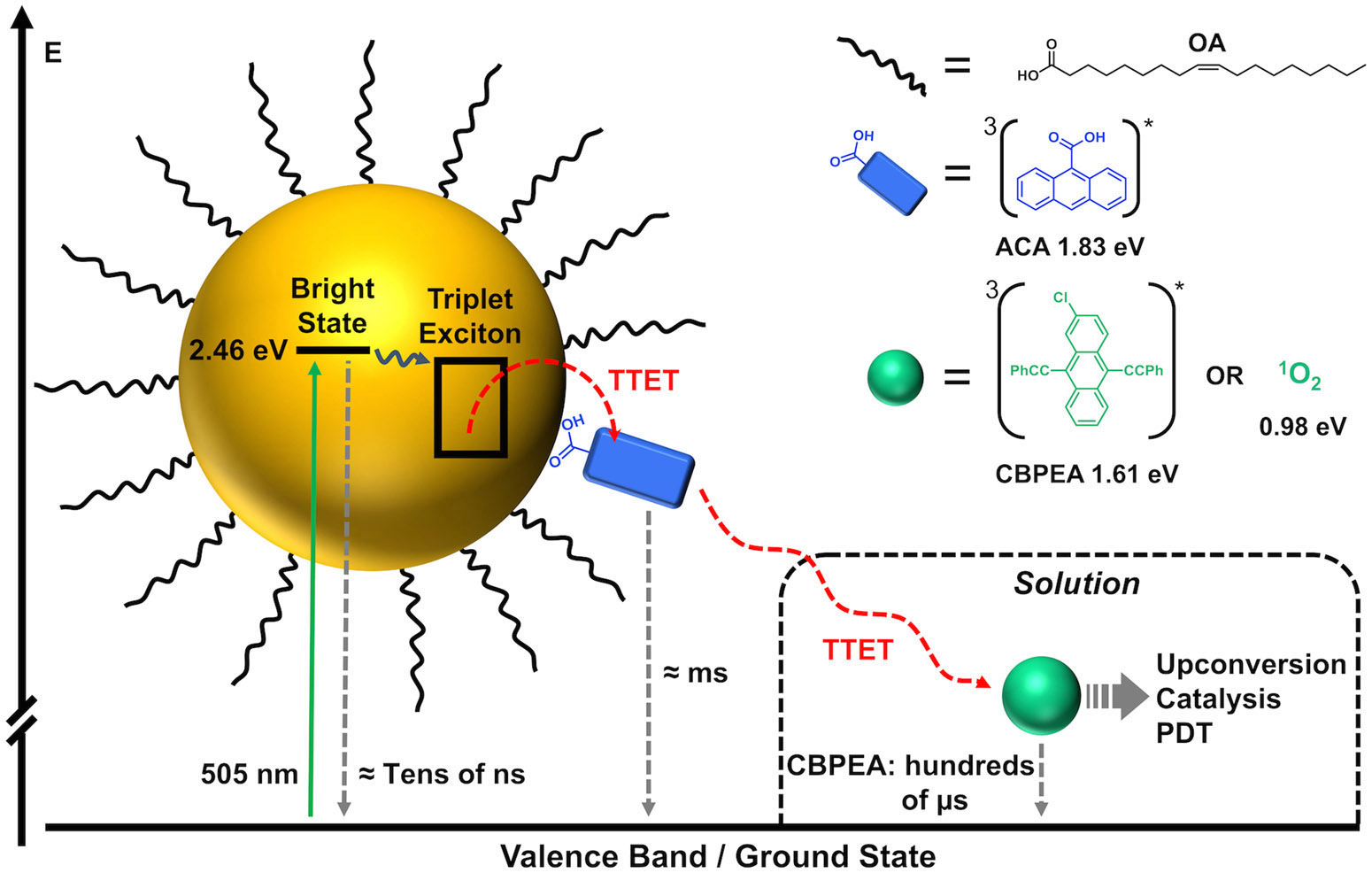 Since the energy transfer process in our experiments takes place at the molecule–nanoparticle interface (i.e., resembling an intramolecular process), the dynamics occur on ultrafast timescales. To monitor the photoinduced processes in these materials, we used femtosecond transient absorption spectroscopy to observe the excited-state dynamics following a 500nm laser pulse (100fs full width at half-maximum, 0.2μJ). We find—see Figure 3(a)—that direct triplet-triplet energy transfer (TTET) between the CdSe excited states and the surface-anchored molecular acceptors occurs within hundreds of picoseconds after the laser pulse (with an average rate constant of 2.0×109s−1) and with a nearly quantitative yield. Consequently, the CdSe photoluminescence was completely quenched, and the CdSe exciton ground-state recovery correlated with the molecular ACA triplet excited-state (3ACA*) signal growth (which occurred at a rate of 2.2×109s−1). 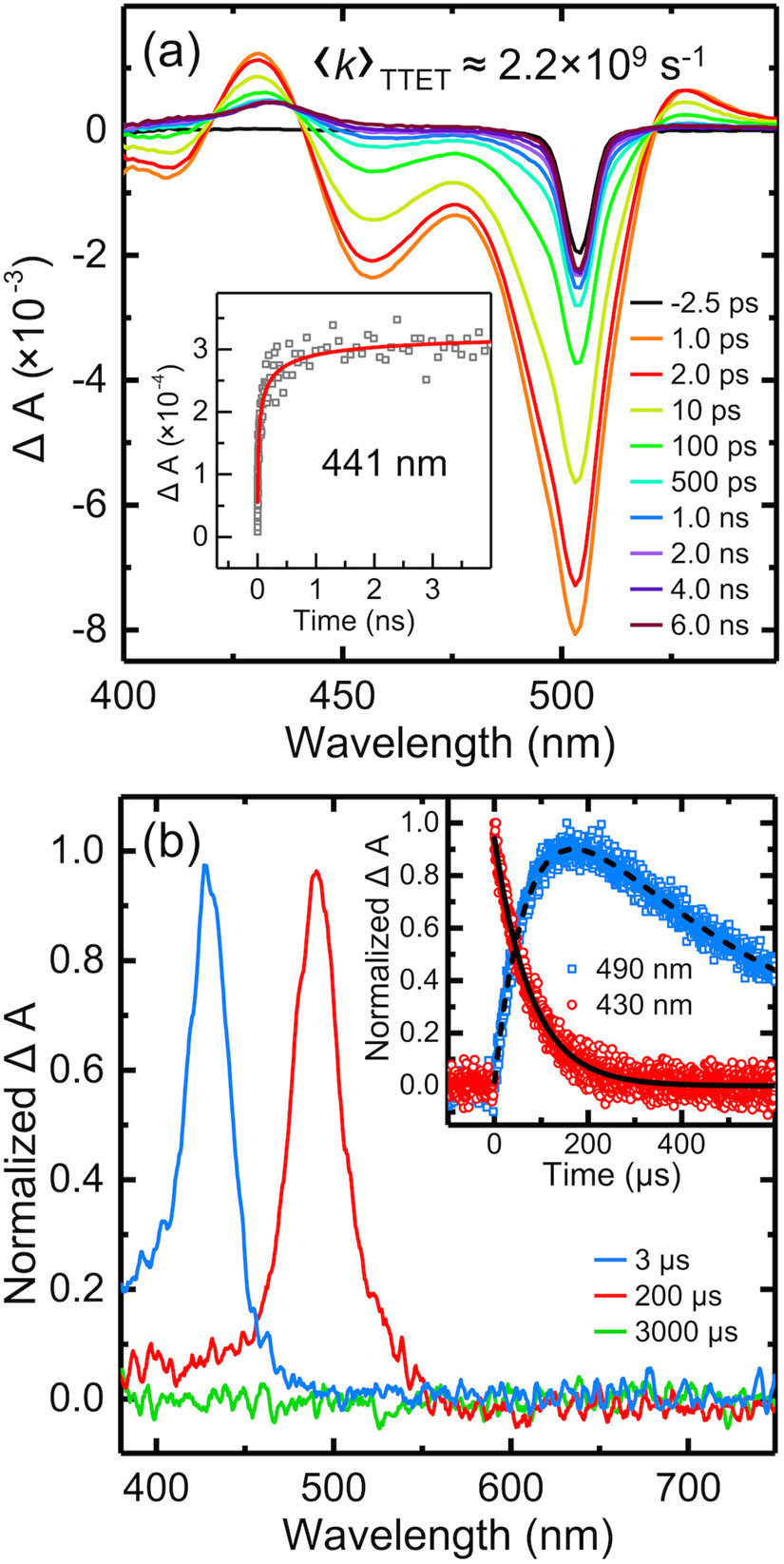 Figure 3. (a) Ultrafast differential transient absorption (TA) spectra of CdSe-OA quantum dots suspended in toluene. These spectra were obtained upon selective excitation of CdSe, with the use of a 500nm laser pulse. The inset shows the TA kinetics for the growth of the molecular ACA triplet excited state (3ACA*) at 441nm. ΔA: Change in absorbance. 〈k〉TTET: Average TTET rate constant. (b) TA difference spectra (from a 1mJ laser pulse with 505nm excitation wavelength, 5–7ns full width at half-maximum) measured at selected delay times after the laser pulse for CdSe/ACA CBPEA in deaerated toluene (at concentrations of 5 and 6μM, respectively) at room temperature. The inset illustrates the triplet energy transfer reaction between 3ACA* and CBPEA. It shows TA decay kinetics at 430nm (red), as well as the rise and decay at 490nm (blue) along with their biexponential fits (solid and dashed lines, respectively).5

The 3ACA* has an extremely long lifetime because of the strongly spin-forbidden nature of the T1 # S0 transition (i.e., between the lowest energy triplet excited state and the singlet ground state). Our results also show the decay of the 3ACA* excited states that formed on the CdSe surfaces had lifetimes on the order of milliseconds. This result represents a remarkable six-order-of-magnitude increase from the initial CdSe excited-state lifetime. Such a long excited-state lifetime is promising for numerous applications because it provides the opportunity for additional chemical reactivity within the bulk solution.

As a proof of concept, we used a secondary freely diffusing molecular triplet acceptor—2-chlorobisphenylethynylanthracene (CBPEA)—in solution (toluene), to demonstrate the extraction of triplet energy from the CdSe surface. We observed—see Figure 3(b)—near-quantitative TTET between the 3ACA* and the triplet excited CPBEA (3CPBEA*) states, which can thus enable highly efficient triplet energy extraction from the initially prepared CdSe excitons. Our results also show that once the triplet exciton energy is transferred to the freely diffusing acceptors in a deoxygenated solution, they eventually undergo triplet-triplet annihilation. This leads to upconverted emission from the 1CBPEA* (at 490nm), with a lifetime of hundreds of microseconds, as shown in Figure 4(a). Moreover, in an aerated solution of CdSe/ACA we detected the characteristic photoluminescence (centered at 1277nm) of singlet oxygen (1O2), which results from the quenching of 3ACA* by freely diffusing ground-state oxygen. In contrast—see Figure 4(b)—we observed no such signal when we used CdSe nanoparticles that were devoid of ACA ligands. This work therefore represents the first example of 1O2 sensitization by semiconductor nanocrystals via a mechanism other than Förster energy transfer.

Figure 4. (a) Delayed fluorescence (DF) spectra of triplet-sensitized upconversion emission that occurred as a result of TTET from CdSe/ 3ACA* to CBPEA, followed by triplet-triplet annihilation. The inset shows the emission decay kinetics of the integrated delayed emission. (b) Near-IR singlet oxygen phosphorescence emission from CdSe-OA and CdSE-OA/ACA in aerated toluene (both at a concentration of 4μM), under 505nm excitation at room temperature.5

In summary, we have conducted proof-of-concept experiments in which we show that CdSe quantum dots are effective surrogates for more-ubiquitous molecular triplet photosensitizers in energy conversion processes. The high photostability, broad absorption spectra, and tunable optical properties of such quantum dots give rise to their superior properties. We have also demonstrated that the behavior of semiconductor quantum dots mimics the classical behavior of molecular triplets, and that triplet excitons in nanocrystals can be efficiently transferred to a bulk solution through successive (and nearly quantitative) triplet energy transfer steps. This photofunctionality may be exploited for numerous triplet excited-state reactions, including photoredox catalysis, singlet oxygen generation, photochemical upconversion, and excited-state electron transfer. Our current research activities include generalizing this approach across a range of semiconductor nanocrystalline materials, probing the ‘molecular’ nature of these materials, and applying these long-lived excited states in a range of photoactivated chemistry.

This work was supported by the US Air Force Office of Scientific Research (FA9550-13-1-0106) and the Ultrafast Initiative of the US Department of Energy, Office of Science, Office of Basic Energy Sciences, through Argonne National Laboratory (under contract DE-AC02-06CH11357).

Cédric Mongin received his PhD in organic chemistry (on photoswitchable molecular cages) from the University of Bordeaux, France, in 2013. Since 2014 he has been a postdoctoral researcher in the Castellano research group at NCSU, where his research focuses on the exploitation of semiconductor quantum dots as promising triplet sensitizers. He will begin his independent career later this year, as a faculty member in chemistry at the École Normale Supérieure de Cachan, France.

Sofia Garakyaraghi received her BS in chemistry (with a minor in mathematics) from the College of William and Mary in 2013. She is currently a PhD candidate under the guidance of Felix Castellano. She is studying the excited-state dynamics of various molecular- and nanocrystal-based systems with the use of ultrafast spectroscopy.

Felix (Phil) Castellano earned a BA from Clark University in 1991 and a PhD from Johns Hopkins University in 1996 (both in chemistry). Following a National Institutes of Health postdoctoral fellowship at the University of Maryland's School of Medicine, he accepted a position as assistant professor at Bowling Green State University in 1998. He was promoted to associate professor in 2004, to professor in 2006, and was appointed director of the Center for Photochemical Sciences in 2011. In 2013 he moved his research program to NCSU, where he is currently a professor. He was appointed as a fellow of the Royal Society of Chemistry in 2015. His current research focuses on metal-organic chromophore photophysics and energy transfer, photochemical upconversion phenomena, solar fuel photocatalysis, energy transduction at semiconductor/molecular interfaces, and excited-state electron transfer processes.