Positron emission tomography (PET) scanners provide quantitative information about various physiological and biochemical processes that occur in a living body (e.g., glucose metabolism, gene expression, and drug occupancy). In general, scintillation detectors—consisting of inorganic scintillation crystal and photosensor arrays—are used in PET scanners to measure the gamma rays that are emitted from radiopharmaceuticals. In this process, visible or UV photons are emitted when gamma rays are detected by the scintillation crystal and are then measured by the photosensors. There are, however, several problems associated with these traditional PET detection systems (e.g., limited efficiency and high cost) and alternative options are therefore required.

The rapid development of silicon photomultipliers (SiPMs) means that these photosensors can now offer extremely high count rate detection and photon number resolution.1, 2 One of the most promising applications of these innovative devices is the simultaneous acquisition of PET and magnetic resonance imaging (MRI) scans for the study of animal models of human diseases. However, there are several technical challenges connected with this approach. For instance, there is only limited space for PET detectors and electronics inside the MRI bore, and mutual interference between the PET and MRI components tends to occur.3–5 Most previously developed small-animal PET/MRI systems have been based on avalanche photodiode (APD) technology.6, 7 The relatively poor physical performance of APD-based PET systems, however, has further heightened the demand for the next generation of PET/MRI systems (i.e., based on more advanced semiconductor photosensors).

In our group, we performed the early proof-of-concept study of an MRI-compatible SiPM PET detector.4 We also reported the first prototype animal PET scanner8 and the first in vivo PET/MRI studies9 that were based on SiPM PET technology (see Figure 1). Over the last few years we have been focused on the development of a very compact SiPM PET system that can be easily combined with small-animal dedicated-MRI systems. It has been our aim to build a PET/MRI system in which each imaging device exhibits minimal physical performance degradation, but which provides sufficiently high spatial resolution and sensitivity for rodent imaging, and to demonstrate the feasibility of this system through various animal experiments. Another important goal of our project was to maintain the system stability against environmental changes (e.g., temperature). 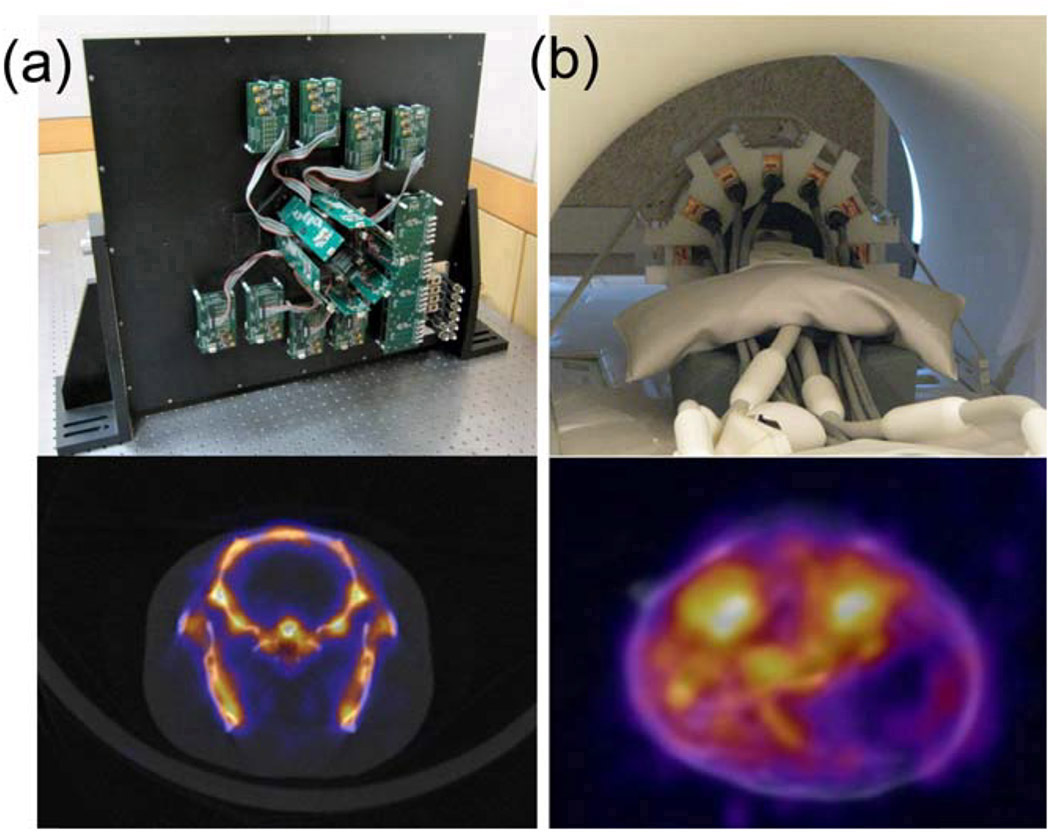 Figure 1. Illustration of previously developed prototype positron emission tomography (PET) systems that include silicon photomultipliers (SiPMs). (a) Photograph of the first SiPM PET prototype and a corresponding PET/computed tomography image. (b) The SiPM PET insert that is compatible with magnetic resonance imaging (MRI) inside a 3Tesla MRI scanner, and a PET/MRI image acquired with this system.8, 9

In the final part of our project, we have recently presented the first (to our knowledge) SiPM-based preclinical PET system that can be fully operated inside a small-animal ultrahigh-field MRI scanner.10, 11 We achieve excellent system performance (3.4% sensitivity and 0.53mm3 volumetric resolution, with ordered subset expectation maximization image reconstruction10) and MRI compatibilities, and we can thus overcome the space limitation of small-diameter MRI bores (see Figure 2). Our PET system consists of four rings of 16 detector blocks (yielding a ring diameter of 64mm and an axial field of view of 55mm). Each detector block consists of a 9 × 9 array of lutetium-yttrium oxyorthosilicate crystals (1.2 × 1.2 × 10mm3) and a monolithic 4 × 4 SiPM array. 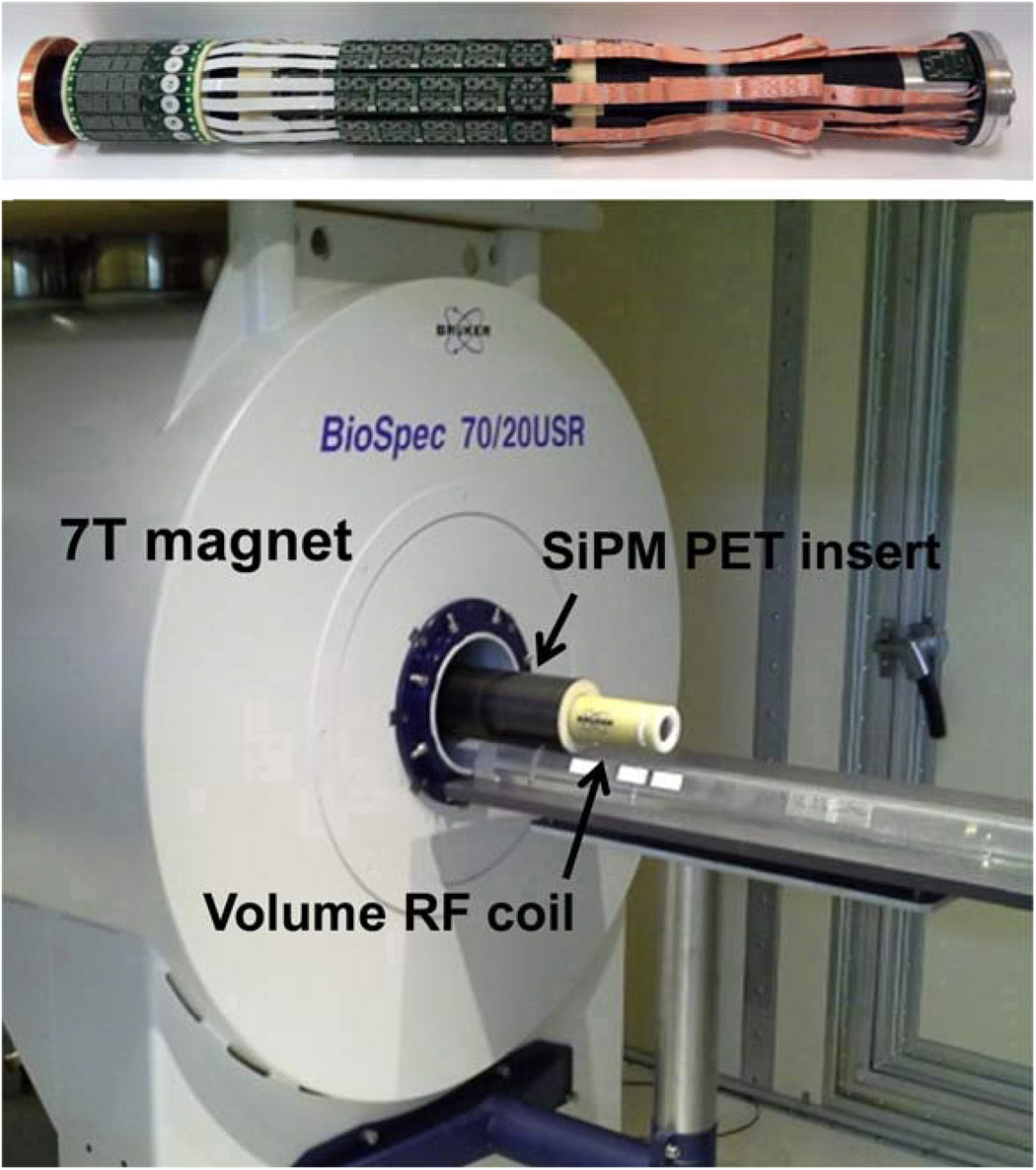 In our demonstration of this SiPM-based PET system, we monitored the temperature of each monolithic SiPM and we applied the necessary bias voltage (according to the real-time temperature readings) to maintain a uniform performance.10 We used a biopolar approach to multiplex the signals from eight detector blocks to one detector signal. In this way, we encoded each detector with a combination of polarities for four position signals.12 The thickness and outer diameter of our PET system (which is shielded by a carbon fiber tube) are only 2 and 10cm, respectively. This means that our system can easily fit within the narrow space between the radio-frequency and gradient coils of a superconducting 7Tesla (7T) MRI scanner (BioSpec 70/20 USR from Bruker).

In our recent study, we have also investigated the PET/MRI mutual interference and have conducted meaningful in vivo experiments.11 In addition, our rigorous PET stability and performance evaluation results demonstrate the high performance of our small-animal PET/MRI development.10 The high spatial resolution of our SiPM PET system allowed us to scan the tiny myocardium and striatum in mice.10 The sufficiently long axial field of view of our PET and MRI scanners also meant that we were able to scan the whole brain of a mouse (i.e., from the olfactory bulb to the brain stem) without moving the animal. We obtained perfectly coordinated multiparametric information for a mouse model of glioblastoma (a malignant brain tumor) by making a simultaneous PET/MRI scan with [11C]methionine (a PET tracer for visualizing neutral amino acid uptake and protein synthesis) and various MRI pulse sequences, including T2-weighted (where T2 is the spin–spin relaxation time), fluid-attenuated inversion recovery, and diffusion-weighted imaging. We also demonstrated that simultaneous PET/MRI is a useful tool for the development of new multimodal imaging modes, e.g., a radiolabeled nanoparticle for sentinel lymph node mapping.13 We confirmed the accumulation of this iron oxide nanoparticle—64Cu-NOTA-iron oxide-mannose (where Cu is copper and NOTA is 1,4,7-triazacyclononane-1,4,7-triacetate)—in mouse lymph nodes (as shown in an MRI scan) with our simultaneously acquired PET scans. Although the PET scans yielded worse spatial resolution than the MRI scans, they nonetheless exhibited higher target-to-background contrasts (see Figure 3).11 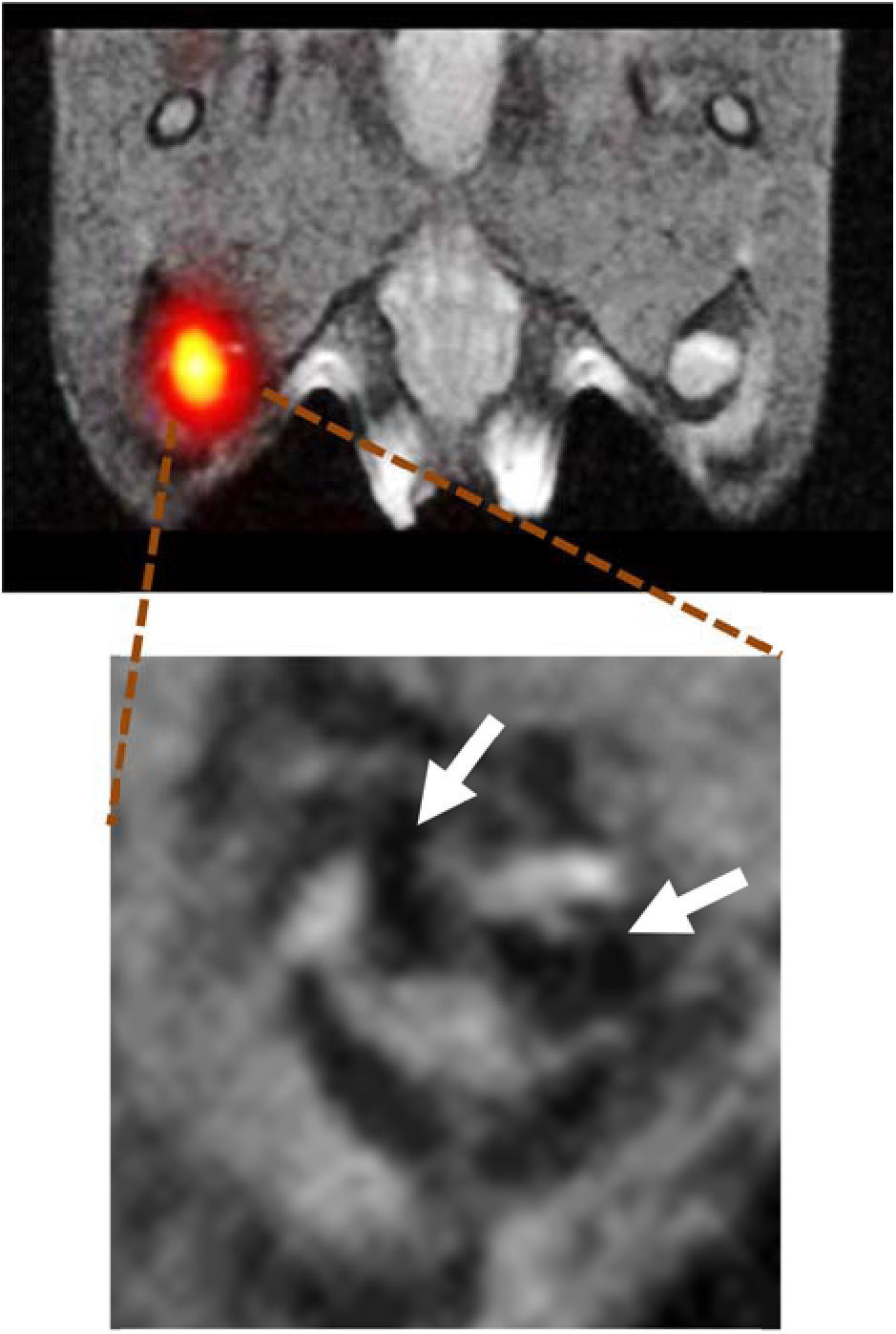 Figure 3. Simultaneously acquired PET and magnetic resonance images of a sentinel lymph node obtained after injection of a radiolabeled nanoparticle.11

In summary, we have successfully developed a simultaneous multiparametric PET/MRI system based on an MRI-compatible SiPM PET insert. Our technology has good physical performance and good stability when combined with a 7T small-animal dedicated-MRI scanner. We have also demonstrated the feasibility of using our system for small-animal experiments. Our approach may thus be useful for investigating rodent models of diseases and for cross-validation studies of bimodal imaging probes for PET and MRI. Our future work in this field will include the integration of our SiPM PET system with cryogen-free high-performance compact magnet-based MRI scanners that are affordable for routine use by molecular imaging scientists.

This work was partly supported by grants (2008-2003852 and 2014M3C7034000) from the National Research Foundation of Korea, which is funded by the Korean Ministry of Science, ICT and Future Planning.

Guen Bae Ko is a graduate student in the Department of Biomedical Sciences.

Hyun Suk Yoon was previously a postdoctoral researcher in the Institute of Radiation Medicine, and is currently based at the Korea Institute of Nuclear Safety.

Kyeong Yun Kim is a graduate student in the Department of Biomedical Sciences.

Min Sun Lee is a graduate student in the Interdisciplinary Program of Radiation Applied Life Science.