A new three-probe measurement system has been developed and implemented with a data-stitching algorithm to improve its accuracy.
07 July 2016
Mikio Kurita, Naoto Emi and Tomofumi Shimoda

Interferometry is a powerful methodology that is used widely for metrology measurements of telescope optics. It can be difficult or nearly impossible, however, to measure large convex optics (that do not have a real focal point), or complex-shaped optics, with an interferometer. Furthermore, interferometers require a large amount of space (comparable to the radius of curvature of the test mirror).

As an alternative metrology technique for measuring freeform optics, there is the potential to use mechanical methods. However, little research has so far been conducted in this field because of the difficulties associated with realizing precise, stable motions and high-resolution probes. For example, a swing-arm profilometer method1 (the most successful mechanical approach available) is only applicable to aspheres that are very close to spherical. In addition, this technique requires that a rotational arm travels all over the surface of the test mirror.

In our work we have therefore developed a scanning system in which we utilize the principle of a three-probe method.2 This method is similar to that of a spherometer, i.e., which measures the curvature of a local area on a test surface and scans the surface along a straight or curved line. By integrating the curvature measurements, a cross-sectional shape of the test surface can be obtained (see Figure 1). Our system is very simple and can be realized by bringing the three-probe unit into contact with the test surface and by using a low-precision actuator to drag the unit.

Figure 1. Schematic illustration of the three-probe method. Three probes are used to measure the local curvature of the test surface (mirror). The separation between the probes is the step distance of the scanning motion and corresponds to the lateral spatial resolution. The measured curvature is insensitive to the rigid body motion of the probe unit.

The simplicity of our system arises for a number of reasons. First, we use the machining system in situ and thus occupy only a small space. In addition, we do not require accurate motion along the measuring direction because the curvature measurements we obtain are unaffected by the piston and tilt motions of the unit. We also do not have to numerically control the system because the unit automatically keeps itself normal to the test surface. Furthermore, the probes we use have short measurement ranges that correspond to asphericity. Lastly, we do not require a stable (in terms of temperature and vibration) environment because the unit is always in contact with, or close to, the surface.

In our study we have tested the three-probe system by measuring a nearly flat mirror (with a 300mm diameter) on an old milling machine. During this test, the probe unit was dragged across the mirror surface by the automatic feed motion of the milling machine. From the results of this test, i.e., a measured peak-to-valley (P–V) value of about 20nm, we were able to confirm the accuracy of our system (even under the poor test conditions).

For the next stage of our work, we used our system to measure a spherical mirror (with one focal point and an 800mm diameter). To check the low-spatial-frequency sensitivity of our measurement approach, we supported the mirror at three points (i.e., so that large-scale deformation was induced). We placed the mirror on a potter's wheel on the floor and we made 60 radial scan paths by manually rotating the wheel for every scan. The results from this experiment are shown in Figure 2(a), along with a deformation map—Figure 2(b)—which we simulated through a finite element method (FEM). We find that the global shapes, and their amplitudes, are consistent between the two datasets (i.e., experimental and simulated). The quantitative difference between our experimental results and the FEM-analyzed map is shown in Figure 2(c). We also illustrate measurement results for the same setup that we obtained with a Fizeau interferometer (under ideal supporting conditions, with little stress) in Figure 2(d). These Fizeau interferometer results clearly show that the mirror actually has a high-frequency, small-amplitude structure of an ∼30nm centrosymmetric pattern. The residual trefoil pattern is mainly caused by the misalignment between the supporting conditions used in the experimental tests and in the FEM analysis. 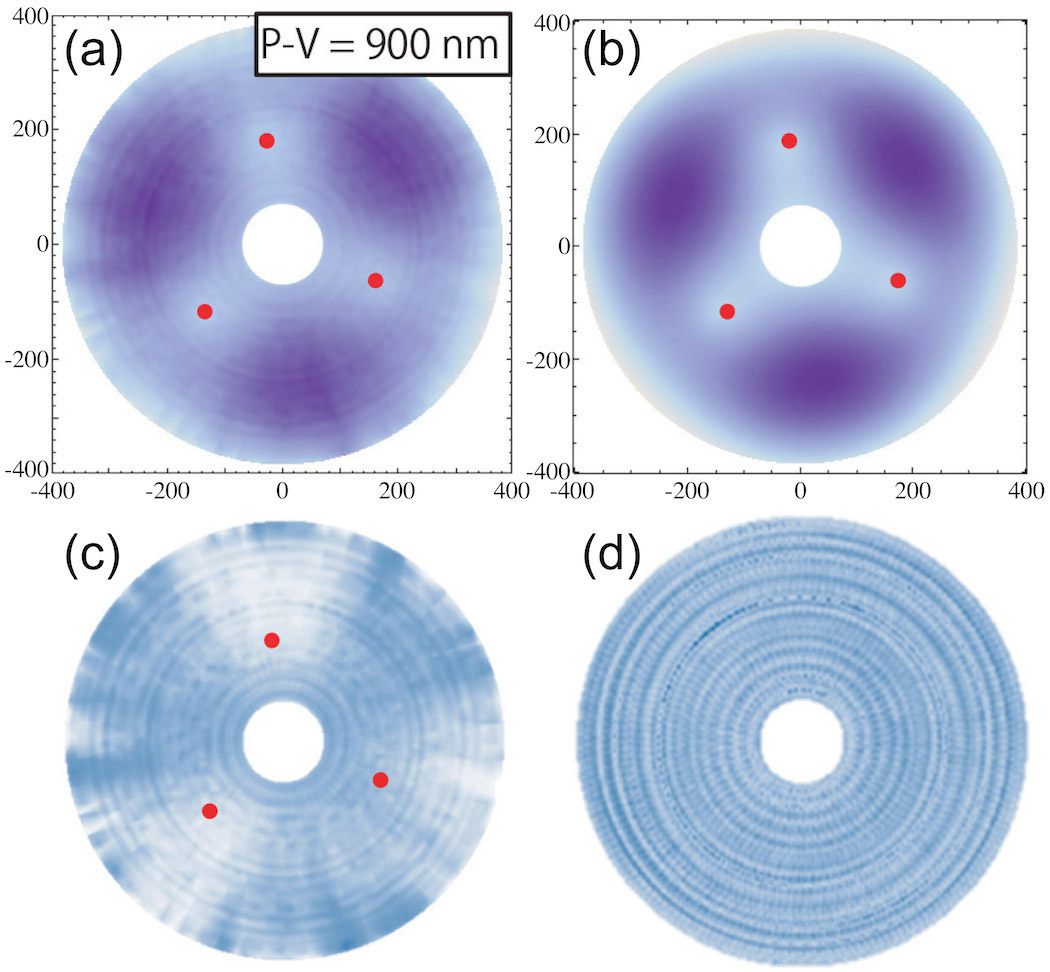 Figure 2. (a) Low-spatial-frequency measurements of a spherical mirror made with the three-probe system. The measured peak-to-valley (P–V) value is 900nm. Red dots indicate positions at which the mirror is supported. Note that the data-stitching algorithm has not been applied to these measurements. (b) Simulated finite element method (FEM) analysis of the mirror. (c) Difference between the experimental measurement and the FEM analysis results. (d) Measurement results obtained with a Fizeau interferometer (with stress-free support).

Unfortunately, our three-probe method produces large errors in the curvature measurements obtained in each scan, and the magnitude of this error is proportional to the number of measurement steps. As a result, a considerable error can arise when high-spatial-frequency sampling and long measurement distances are required. To improve this error, we have developed a new data-stitching algorithm that is based on the theory of elasticity.3 In this algorithm we consider each dataset as an elastic body that is like a steel beam. The beam (i.e., data) can be deformed so that it meets completely at scan intersection points and settles into a minimum energy state of the beam network. We illustrate the use of this algorithm for 60 radial scanning path measurements (not the same as those shown in Figure 2) in Figure 3. The true figure of the test surface—see Figure 3(b)—includes a bell-shaped structure. The simulated least-squares fitted data—see Figure 3(c)—obtained from the three-probe method, however, contains a large error (more than 0.8). This error, which arises from the 100 measurement steps in each scan and introduces discrepancies at the scan intersections, makes it impossible to see the bell structure. After application of the algorithm—see Figure 3(d)—there are no discrepancies at the scan intersections. For this particular case, the algorithm decreased the root mean square error to 20% at the large scale and to 10% at the small scale. With our algorithm we smooth and extract embedded information from the raw data without loss of spatial information. We can also apply the algorithm to image data (e.g., information obtained from a sub-aperture interferometer). 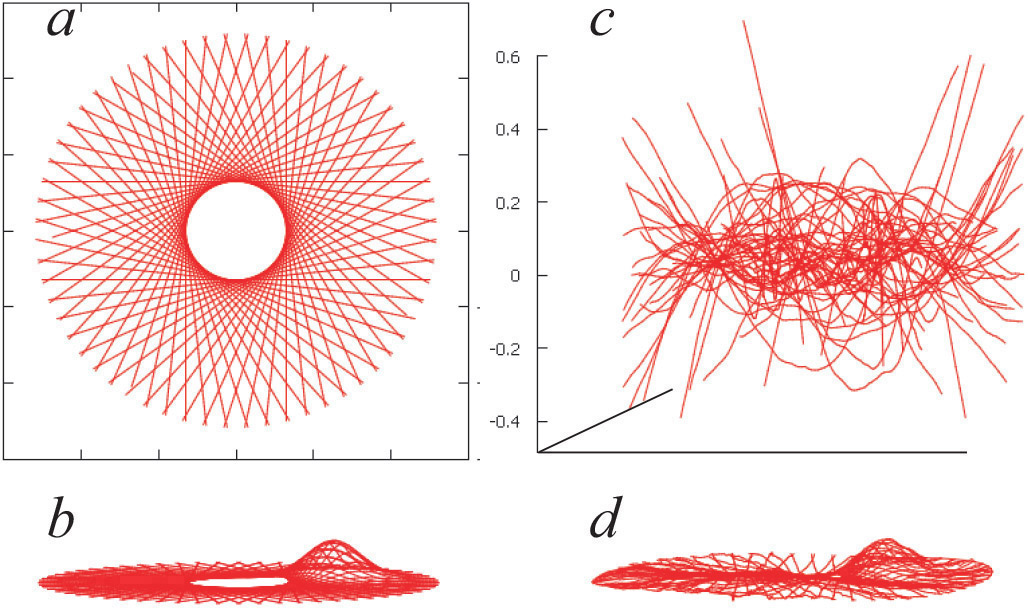 Figure 3. Illustration of the data-stitching algorithm for the three-probe method. (a) 60 radial scanning paths across the test surface. (b) True figure of the test surface, which includes a bell-shaped structure (height of 0.1). (c) Simulated least-squares fitting result of the data obtained from the three-probe method. This shows the error that arises from the 100 measurement steps in each scan, i.e., the discrepancies at scan intersections. The large error (more than 0.8) makes it impossible to observe the bell structure. (d) Result of applying the algorithm to the data shown in (c). This result is free from any discrepancies at the intersections. (b), (c), and (d) are shown on the same scale.

In summary, we have developed a simple and inexpensive, yet accurate, mechanical metrology system for measuring freeform optics. In addition, we have implemented a new post-processing data-stitching algorithm to improve the accuracy of the three-probe system measurements. In our future work we plan to develop a semi-automatic polishing system with a robotic arm and the three-probe method. The computing for our stitching model has so far been conducted with the use of Calculix4 software. This is a general FEM tool, however, and is not ideal for our algorithm. We are therefore also in the process of developing dedicated software that we can apply to line-scan and image data.

Mikio Kurita researches telescope structure, instruments for astronomy, and the interstellar medium with the use of near-IR observations. He is also involved in the promotion of the ongoing 3.8m segmented telescope project that will be constructed at the Okayama Astrophysical Observatory. 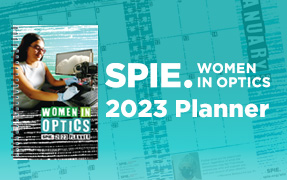