Ethernet protocols (i.e., the IEEE 802.3ba 100Gb/s and the forthcoming IEEE P802.3bs 400Gb/s standards) provide the definitions for data transmission systems that are used in long-range (10km) and extended-range (40km) fiber links. These transmission systems include multichannel 25GBd on-off keying (OOK)—the simplest form of intensity modulation in which digital information is represented by low (0) and high (1) amplitude levels—and four-level pulse-amplitude modulation (PAM4). Directly modulated lasers (DMLs) are an attractive option for a light source in such applications because of their low cost, small footprint, and low power consumption. In addition, they allow simple direct detection, while being operated in an intensity-modulation mode. DMLs, however, are strongly limited by their bandwidth. Indeed, much higher data rates are possible with coherent systems in which more advanced modulation schemes and complex transmitters are used.

As an alternative to conventional quantum-well-based DMLs, quantum-dot lasers (QDLs) have been studied extensively. QDLs feature several unique properties, e.g., they have temperature-insensitive and ultralow threshold current, and low linewidth enhancement factors.1 Gallium-arsenide-based (GaAs-based) QDLs exhibit at least three confined electronic energy levels, i.e., a ground state (GS) and two very close excited states (ESs). The GS is twofold degenerate, whereas the ES is fourfold degenerate. The larger degeneracy translates to a larger differential gain and smaller nonlinear gain compression.2 Direct modulation of QDLs on the GS, at over 20Gb/s, has been demonstrated for both indium arsenide (InAs)/GaAs lasers at 1.31μm (O-band)3 and for InAs/indium phosphide (InP) devices at 1.55μm (C-band).4 The bandwidth of these structures, however, is limited by several factors, including inhomogeneous broadening (low modal gain),5 the hot-carrier effect, and the slow capture time into the quantum dots (large gain compression).6 To ensure sufficient gain, several quantum dot (QD) layers with wide spacers (limiting carrier transport across the active region) are usually incorporated into QDLs. The holes tend to accumulate on the p-side of the active region because of their short diffusion length. This inhomogeneous distribution of carriers limits the modulation response of the devices.7

In our work,8 we have designed a novel GaAs-based QDL in which we incorporate graded p-doping of spacers to compensate for the hole distribution. We have designed this grading so that there is a small amount of p-doping on the topside of the active region and a large amount of doping on the bottom (i.e., substrate) side. Our lasers feature a larger maximum modulation bandwidth (9.2GHz) compared with standard p-doped samples (7.2GHz). Furthermore, by modifying the reflectivity of one laser facet, our lasers (operating exclusively at the ES) exhibit an increased maximum modulation bandwidth of 11.7GHz. We can also realize InAs/indium gallium arsenide/InP QD structures at 1.55μm, which exhibit a –3dB bandwidth of 12.1GHz, by shortening the distance between the electrical contacts and the active region, and by incorporating seven QD layers. We can thus provide sufficient gain, but do not limit the carrier transport.

Our O-band and C-band QDLs exhibit data transmission at a rate of 25Gb/s for direct modulation in the non-return-to-zero OOK scheme. To further increase the digital bandwidth of our devices, we also explored higher-order modulation formats, e.g., PAM4 and eight-level PAM (PAM8). PAM4 results for the O-band and C-band lasers—see Figure 1(a)—show that 17.5GBd (35Gb/s) data transmission was realized with both structures. We thus achieved a 40% increase in the maximum bit rate. Doubling the bit rate, however, was not possible. This is because in PAM schemes (particularly PAM8), the noise level of the lasers becomes the major limiting factor. The 7.5GBd (22.5Gb/s) PAM8 response of a standard p-doped laser structure across 10km of single-mode fiber (SMF) is shown in Figure 1(b). We successfully demonstrated PAM8 for this particular laser structure because it features a strongly damped (but linear) small signal response, an ability to operate at low currents (threshold of 3mA), and a relatively large modulation-current-efficiency factor.8 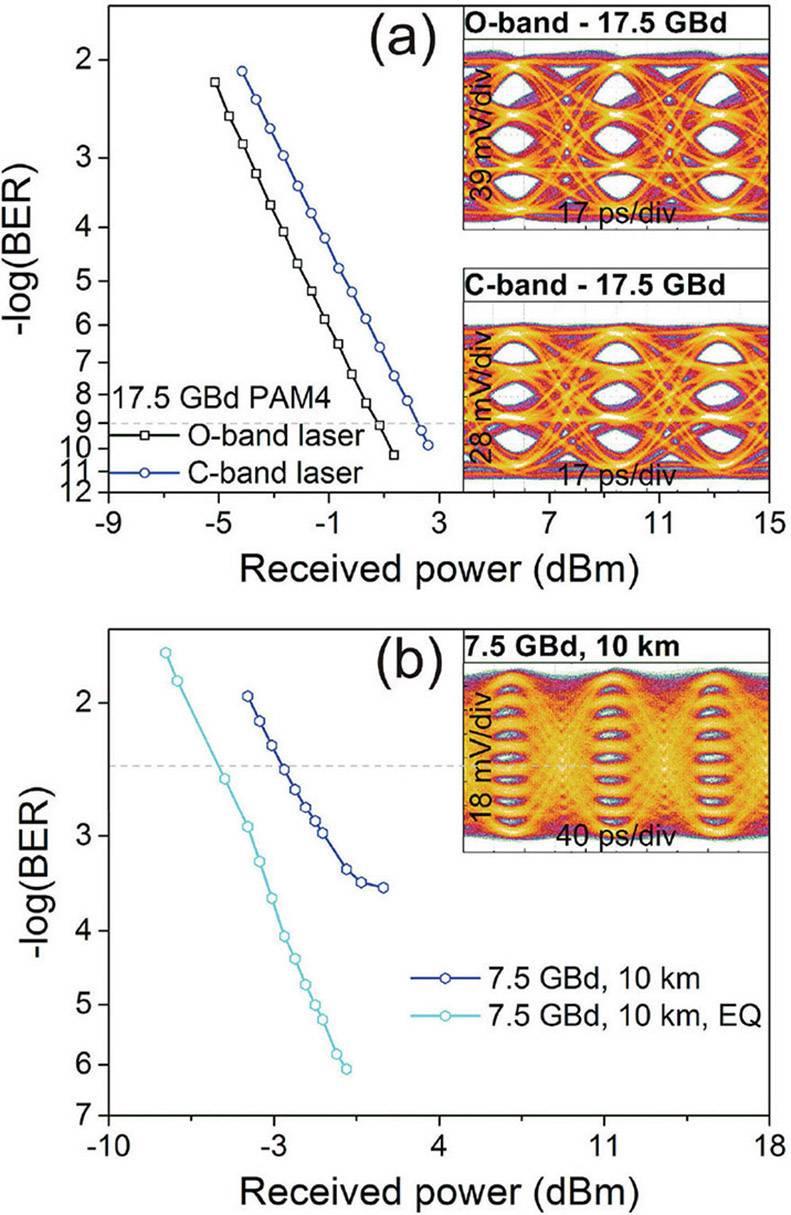 Figure 1. Eye diagrams and corresponding bit-error ratio (BER) curves of (a) the O-band (1.31μm) and C-band (1.55μm) lasers under 17.5GBd four-level pulse-amplitude modulation (PAM4) in back-to-back configuration and (b) of a standard p-doped laser under 7.5GBd eight-level PAM (PAM8) across 10km of single-mode fiber (SMF). In (a) the aggregated BERs were determined by direct detection with an error analyzer. In (b) the BERs were retrieved using digital signal processing of single-shot traces that were acquired with a real-time oscilloscope. The improved BERs at lower received powers were achieved by means of equalization.

In another part of our work, we have packaged a 39.813GHz monolithic two-section mode-locked laser (MLL) that is based on the 1.31μm graded p-doped laser structure into a module. MLLs (which generate optical and electrical pulse trains) are ideal candidates for various applications, e.g., microwave photonics and radio-over-fiber systems. When combined with modulators, MLLs act as transmitters for optical time-division multiplexing (OTDM) systems in optical communication networks. MLLs operate at frequencies far beyond the intrinsic bandwidth of DMLs. In contrast to DMLs, they benefit strongly from an inhomogeneously broadened QD gain spectrum. When all the longitudinal modes are locked, sub-picosecond pulses are emitted. QD MLLs also exhibit ultrafast recovery, which enables pulse generation up to 100GHz.

We achieve jitter reduction and frequency tuning through hybrid mode-locking. In addition, dual-tone injection gives rise to a narrow optical linewidth (essential for coherent systems). We observe a pulse width of 2ps and integrated jitter of 340fs, which makes our MLL suitable for OTDM.9 We generated return-to-zero (RZ) differential quadrature phase-shift keying (DQPSK) data signals by superimposing bit sequences on the MLL pulse train, via successively sequenced dual-drive Mach–Zehnder and phase modulators. We have also conducted data transmission experiments at 40GBd (80Gb/s) across 45km of SMF (see inset of Figure 2). Through the use of DQPSK and OTDM we were thus able to quadruple the bit rate (compared with standard OOK). The corresponding 80GBd (160Gb/s) RZ DQPSK bit-error ratio curves and eye diagrams are also shown in Figure 2.10 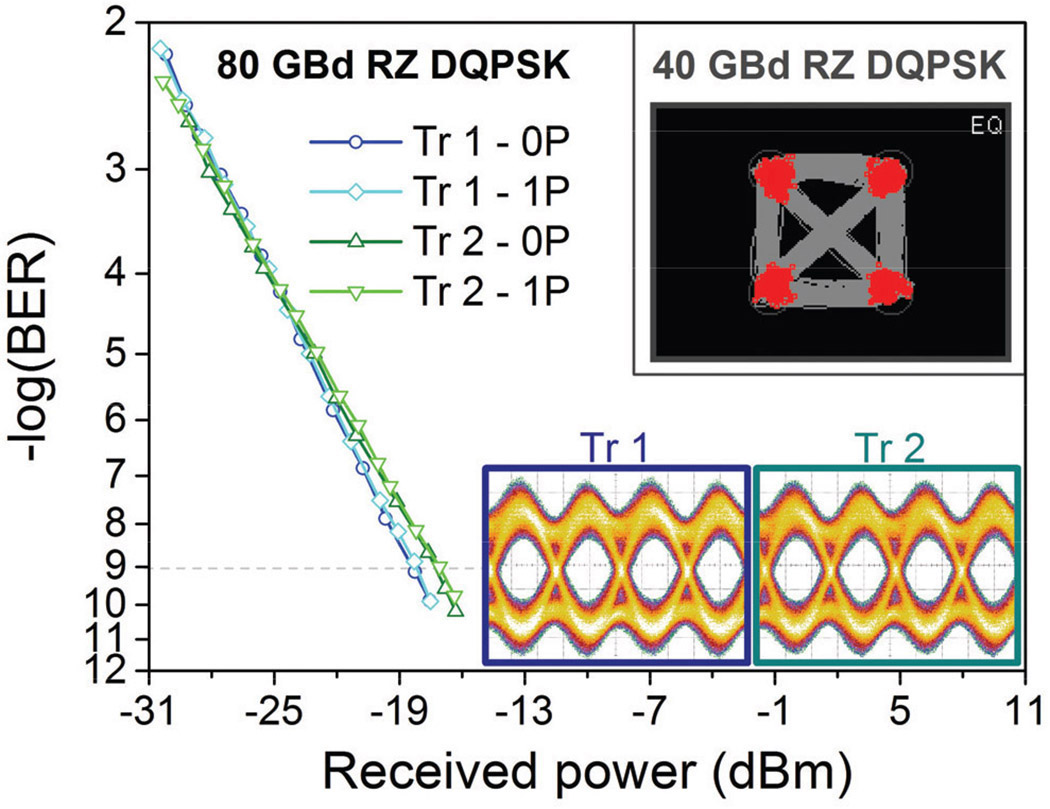 Figure 2. Illustration of 80GBd return-to-zero (RZ) differential quadrature phase-shift keying (DQPSK) in back-to-back configuration. Eye diagrams of tributary 1 (Tr 1) and tributary 2 (Tr 2) at the maximum received optical power were measured by a differential receiver, based on a delay interferometer. The signal-to-noise ratios are 6.7 and 6.5, respectively. BERs were detected by means of an electrical demultiplexer (DEMUX). The BER curves of both DEMUX output signals (0P and 1P) and tributaries show error-free performance (i.e., without error floor to below 10−10. Inset: Constellation diagram of 40GBd RZ DQPSK across 45km of SMF, for the maximum received power obtained with an O-band optical modulation analyzer. The error-vector magnitude is 10.1%.

In summary, in our novel GaAs-based QDL we incorporate graded p-doping of spacers to compensate for carrier transport limitations across the active region, and thus bandwidth limitations, in DMLs. The ES emission has larger differential gain than the GS emission. These improvements lead to higher cut-off frequencies of 1.31μm-InAs/GaAs devices. In addition, our 1.55μm InAs/InP QD lasers, which have a narrowed active region and barriers, exhibit large 3dB bandwidths. We have demonstrated data rates of 35Gb/s using PAM4 for both wavelength bands, and PAM8 reveals that further optimization of the lasers (in terms of their noise performance) is required. This will therefore be the focus of our future research. We have also shown that integration of MLLs as sources in coherent OTDM systems enables 160Gb/s RZ DQPSK data transmission.

Funding for this research was provided by the German Research Foundation in the SFB 787 framework. The authors would like to thank Finisar (Germany) for packaging the quantum-dot mode-locked laser module and C. Meuer at Sicoya for assistance with the digital signal processing.

Dejan Arsenijević received his diploma in physics from the Technische Universität Berlin in 2009. His current research interests include higher-order modulation formats, as well as low-jitter optical and electrical pulse sources for future high-speed data communications.

Dieter Bimberg received his diploma in physics and PhD from Goethe University, Germany, in 1968 and 1971, respectively. Between 1972 and 1979 he was a principal scientist at the Max Planck Institute for Solid State Research in Germany. He was then appointed as a professor of electrical engineering at the Technical University of Aachen (Germany) and, in 1981, as the chair of the Technische Universität Berlin's Applied Solid State Physics department. From 1990 to 2011 he was the executive director of the Institute of Solid State Physics, and in 2004 he founded the Center of Nanophotonics. In addition, he was the chairman of the board of the German Federal Government's Centers of Excellence in Nanotechnologies between 2006 and 2011. His many honors include the Russian State Prize in Science and Technology (2001), the Max Born Award (2006), the William Streifer Scientific Achievement Award (2010), the United Nations Educational, Scientific, and Cultural Organization's Nanoscience Medal (2012), and the Welker Award (2015).