Observing the distribution and dynamics of molecules in living cells is essential for biomedical research. A key established observation method for this purpose is the labeling of target molecules with fluorescent probes. This technique is powerful and intuitive, but is limited to observations of targets that can be readily labelled. As such, it may not provide enough information to explain complex biological events, or to describe individual cell characteristics (such as differentiation conditions).

Raman spectroscopy (i.e., a form of molecular spectroscopy based on Raman scattering) has recently been recognized as a new approach to the experimental investigation of biological samples. If a laser beam is directed onto a material sample, part of the photon energy of the laser will induce a molecular transition to the vibrational excitation state. Because the energy level of the state is determined by the molecular structure of the sample, detecting the energy used for this transition by measuring the wavelength of Raman scattered light (i.e., the Raman spectrum) can provide this information. Raman microscopy produces a map of Raman spectra that shows the distribution of the molecules in a sample. Raman spectroscopy has been shown to be useful for identifying cell type and state, including identifying cancer cells,3 and is expected to be used as a diagnosis tool for clinical conditions in the near future. Raman scattering does, however, suffer from a low efficiency. As a result of this, Raman spectroscopy requires a long exposure time (i.e., several seconds for each sample point, and more than ten hours to obtain a 128×128 image), making Raman analysis challenging to implement for microscopic imaging of living biological samples.

Our research aims to improve the imaging speed in Raman microscopy to extend its application range.1, 4 Typical techniques are based on confocal microscopy, where a sample is scanned with a single laser focus and the resultant Raman scattering is detected through a spectrophotometer. In our microscope, a sample is illuminated with a line-shaped laser that allows parallel detection of Raman spectra from multiple points, thereby increasing the imaging speed by several hundred times.

We used a 532nm wavelength continuous-wave, solid-state laser with a cylindrical lens to produce an 80 × 0.3μm line profile, which we scanned across our samples using a galvanometer mirror. The Raman microscopy images constructed using this method—see Figures 1(a)–(d)—show the distribution of cytochrome c (which indicates mitochondria distribution), the protein beta sheet (which indicates average protein concentration), and carbon-hydrogen bonds in lipids (which are related to metabolic activities). By combining information from these indicators—see Figure 1(d)—we can measure the morphology of the cell and its nucleus, thereby enabling detection of the cell type and condition. Figure 1(e) shows the Raman spectrum from cyotosol in a living HeLa cell. This spectrum provides detailed information about the cell's molecular composition. The image acquisition time was about 26 minutes for 400×120 pixels. Although this is not as fast as fluorescence imaging, it is fast enough to enable the observation of samples undergoing a slow change. We have, for example, observed cell division and the change in cytrochrome c distribution during apoptosis (cell death), as shown in Figure 2.2, 4 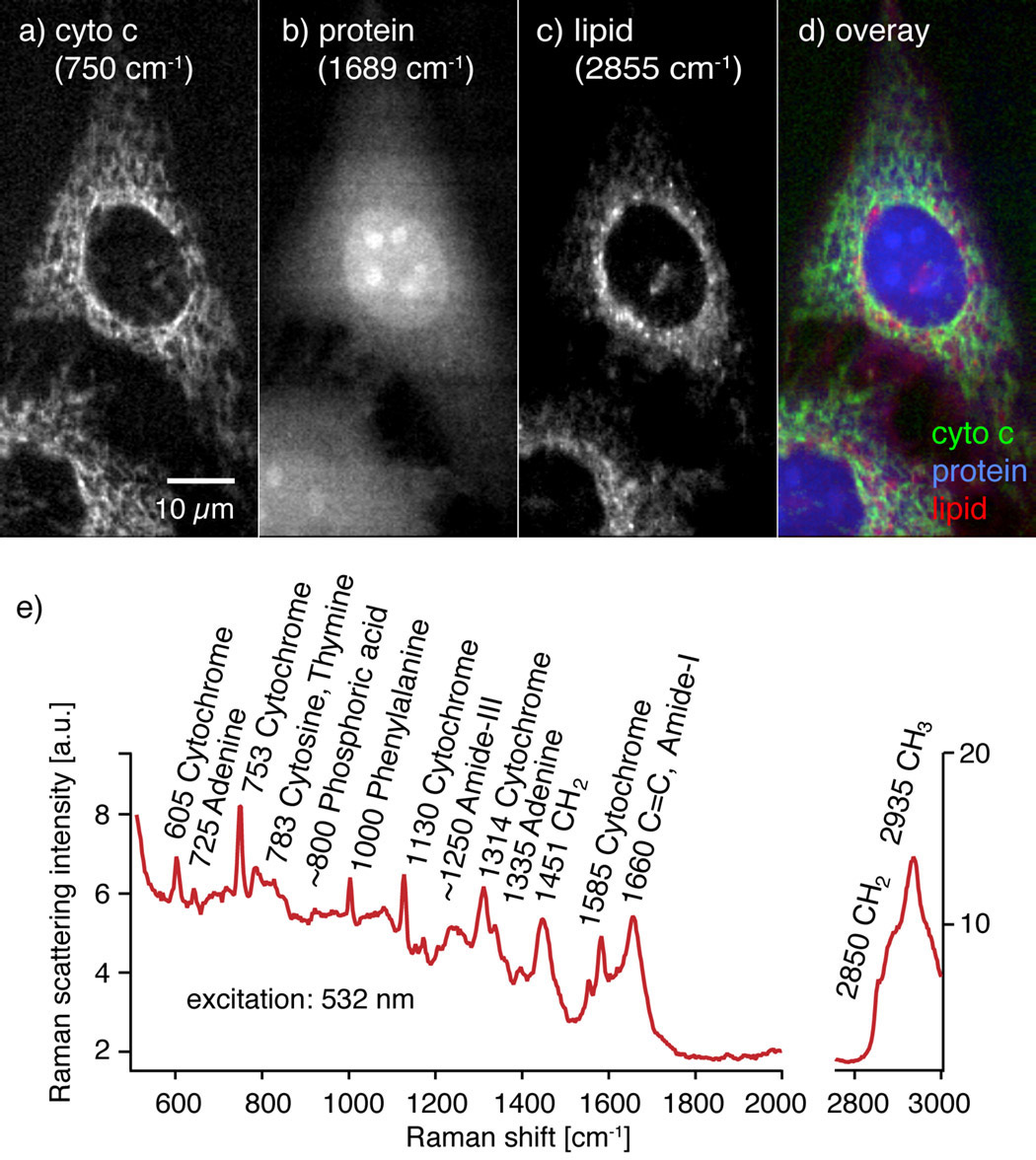 Figure 1. Raman microscopy images and the associated Raman spectrum of a living HeLa cell. (a) Cytochrome c distribution, indicating the distribution of mitochondria (i.e., the power plants of the cell). (b) Beta sheet indicating the protein concentration of the cell. (c) Carbon-hydrogen bonds, indicating the distribution of lipid molecules in the cell (which can be used to describe metabolic activities). (d) An overlay of (a), (b), and (c). (e) A typical Raman spectrum obtained from the cytosol of the cell. a.u.: Arbitrary units. CH2: Methylene. CH3: Methyl group. Adapted from Palonpon et al.1 with permission. Copyright 2013, Elsevier. 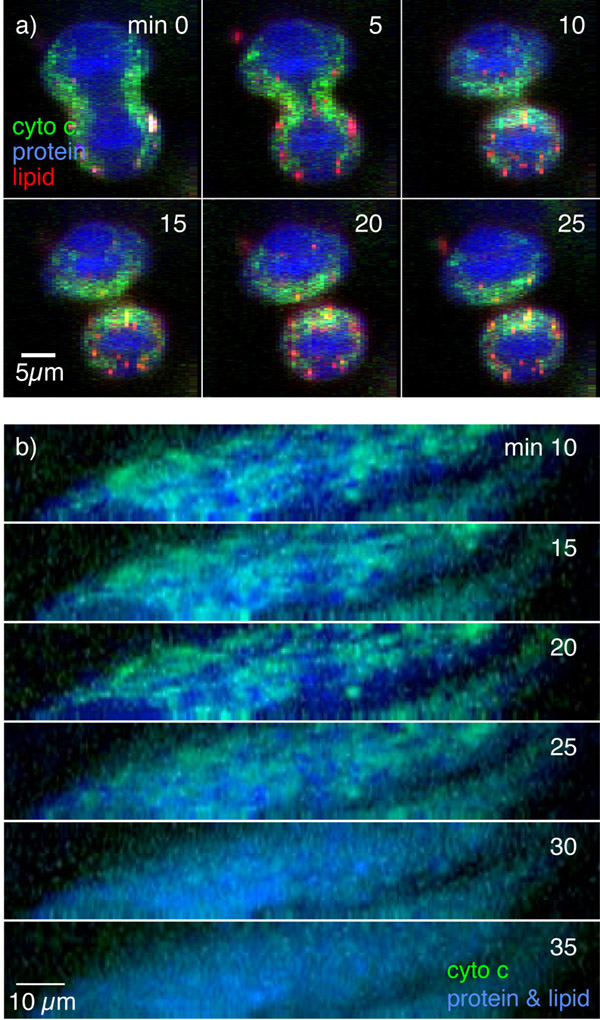 The information obtained via Raman spectroscopy about the molecular composition of a cell can be used to identify the cellular state during complex cellular events, such as cell differentiation. By evaluating the time-course Raman spectra of differentiating mouse embryonic stem cells using principal component analysis, we were able to clearly visualize the changes to the Raman spectrum during these cellular events.6 We have also applied time-lapse Raman microscopy to the observation of osteoblastic mineralization, enabling us to visualize the generation of hydroxyapatite (a crystalline complex of calcium and phosphate) in bone formation and the associated change in cytochrome c and β-carotene distribution: see Figure 3.7

Figure 3. Time-lapse Raman imaging of osteoblast mineralization. The appearance of hydroxyapatite indicates the formation of hard bone tissue. β-carotene is a biomolecule that may be an important biomarker for the initiation of biomineralization. Adapted from Hashimoto et al.5

In another approach, we combine Raman microscopy with a labeling method to produce image contrast for specific biological targets. Ordinary fluorescent probes are not used to label molecules smaller than the probe, since such labeling changes the characteristics of the target. To overcome this issue, we used an alkyne group as a simple tag for small molecules.5, 8 An alkyne group, which consists of a triple bond between two carbon atoms, does not cause a significant change in the functions of molecules in the cell when used as a tag: see Figure 4(a). Additionally, the alkyne group produces a Raman scattering signal in a region that endogenous molecules do not, allowing us to easily distinguish the alkyne Raman peak in the spectrum. We tested this approach by observing cells incubated with the alkyne-tagged deoxyuridine (5-Ethynyl-2'-deoxyuridine, EdU), which can accumulate in a nucleus as a component of DNA. We were able to image the localization of EdU in the cell nucleus by using the Raman signal from the alkyne tag: see Figure 4(b). Furthermore, because different conjugation of the alkyne tag provides variations of Raman shift, simultaneous imaging of different small molecules is made possible.9  This approach has also been combined with stimulated Raman scattering microscopy, which enables the realization of a faster imaging speed by selectively inducing the Raman effect for target vibrations (the vibration of the alkyne in this case).10 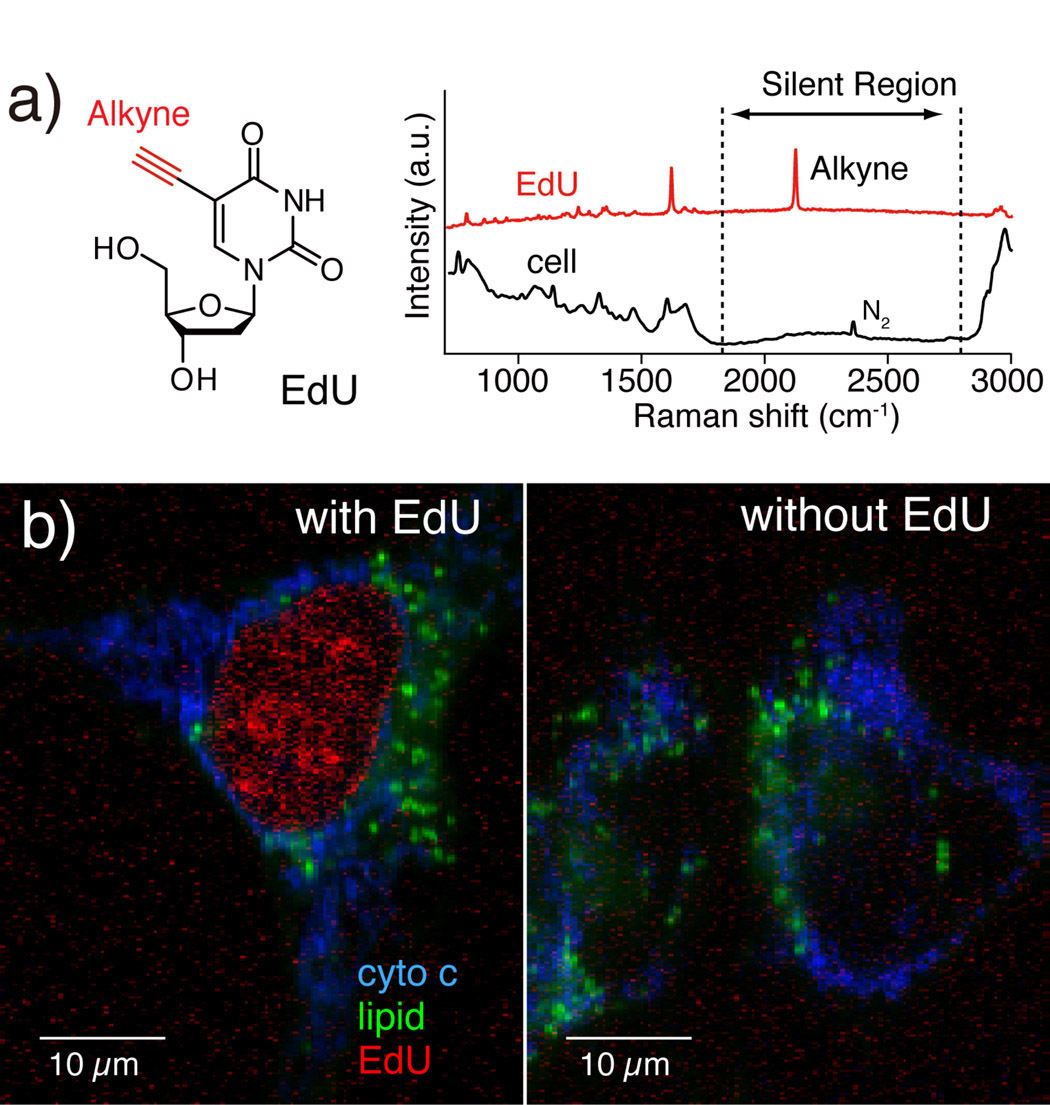 Figure 4. (a) 5-Ethynyl-2'-deoxyuridine (EdU) containing an alkyne tag, and Raman spectra of EdU and a HeLa cell. The alkyne has a Raman peak in the region where endogenous cell molecules do not (silent region). (b) Raman images of HeLa cells incubated with and without EdU. Cyto c: Cytochrome c. Adapted from Yamakoshi et al.7with permission. Copyright 2011, American Chemical Society.

To improve the spatial resolution of our Raman microscope along the line direction, we combined structured illumination with our line-scanning technique.11 To achieve this, we created a dotted line-illumination profile by placing a diffraction grating and a mask in front of the cylindrical lens that produces the line-shaped beam. We have shown that such structured-illumination microscopy can successfully highlight finer structures in images of rat-brain tissue (see Figure 5). Thus far, we have achieved a resolution of 190nm, but have not yet reached the theoretical limit (150nm). To extract information about finer structures, this method requires at least three exposures, thereby leading to an increased imaging time. The image of rat-brain tissue, for example, took approximately 1.5 hours to acquire with 200 scanning steps. 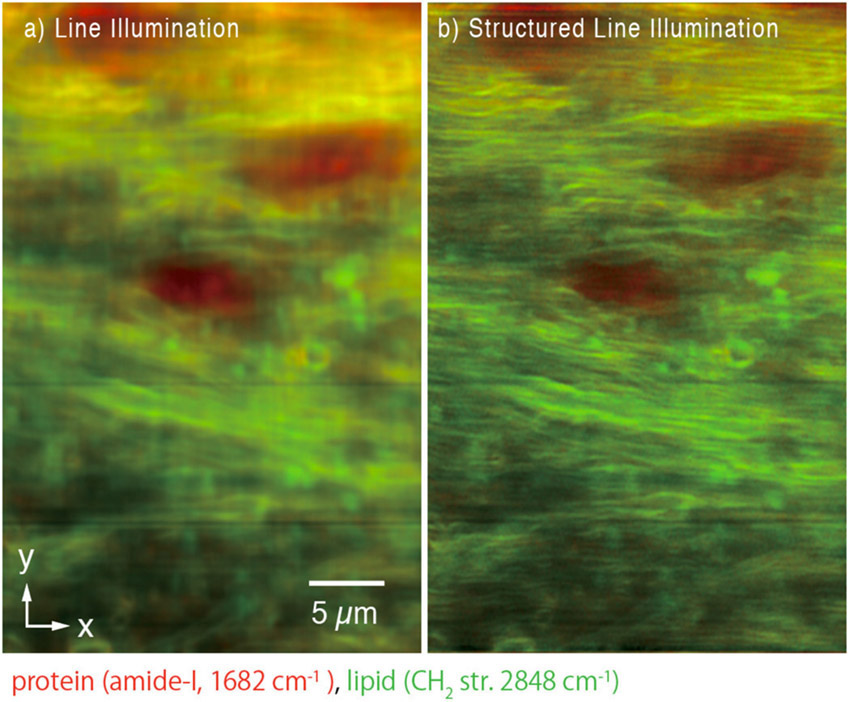 In summary, we have shown that spontaneous Raman scattering can be used to simultaneously visualize structures in a living cell with high spatial resolution and to analyze the molecules in the cell. The molecular information that can be obtained by Raman scattering is not as specific as that from fluorescence microscopy. However, the ability of Raman spectra to provide information about intracellular molecules is an advantage in complicated biological systems, as shown in our analysis of cell differentiation. In the future, we hope to improve the detection sensitivity and acquisition speed of our label-free technique with the aim of making it suitable for applications such as cell diagnosis in regenerative medicine, where cell quality control is important to successful tissue growth and treatment.