A novel approach, based on the principle of an optical switch, involves integration of a phototransistor into the laser cavity.
13 September 2016
Sven Bader, Philipp Gerlach and Rainer Michalzik

Vertical-cavity surface-emitting laser (VCSEL) diodes are widely used in optical sensing and short-distance data communications.1 In these devices, current confinement ensures that high current densities are obtained in close proximity to the active region of the VCSEL, and thereby maintains a low current threshold. At present, the most popular method for current and mode confinement within VCSELs is to implement an oxide aperture, but this is thought to reduce the reliability of the devices.2 To expand the possible application range of VCSELs to the consumer level (e.g., for mobile devices, illumination, and materials processing), their efficiency, modulation speed, and very-long-term reliability must therefore be improved and their associated costs need to be lowered.

In previously developed VCSELs, current confinement was accomplished by mesa etching3 and proton implantation.4 The devices obtained using these methods, however, do not reach the same levels as the modern equivalents (i.e., which contain an oxide aperture, or are realized via epitaxial regrowth5,6). Furthermore, with oxide-confined VCSELs, excellent operation can be achieved,7 but the wet-thermal oxidation process necessary for their fabrication requires tight control. Moreover, the oxidized aluminum gallium arsenide (AlGaAs) layers incorporate strain very close to the active region, which can reduce the lifetime of the lasers.

We have therefore developed a novel optical approach for current confinement in VCSELs that does not require an oxide aperture.8, 9 Our concept is based on the principle of an optical switch. We realize this switch by integrating a phototransistor (PT) on top of light-emitting quantum wells (QWs) in the active zone of the device (see Figure 1).

Figure 1. Schematic layer structure of a phototransistor vertical-cavity surface-emitting laser (PT-VCSEL) with optically self-controlled current confinement. The integrated phototransistor consists of (p-doped or n-doped) emitter, base, and collector layers. Following the principle of an optical switch, the current is only able to flow in directions established by the light beam. α-QW: Absorbing indium gallium arsenide quantum well. GaAs: Gallium arsenide.

In contrast to existing methods, the current path in our VCSEL is not predefined by the incorporation of current-blocking layers. Instead, the laser beam itself defines a laterally confined current path through the device, and passes through the region of the best cavity. The current aperture can thus be optically determined from the quality factor (Q-factor) of the resonator (which can be modified by introducing a top-contact metal or shallow surface-relief etchings).10 The photons from the light beam generate a photocurrent, similar to that found in a pin-type photodiode, via absorption in the indium gallium arsenide (InGaAs) QW (α-QW) at the base-collector junction. This photocurrent is equivalent to a base current. After a certain base-current threshold is met, the PT layers become conductive, thus opening the optical switch. Unexposed or underexposed areas surrounding the laser mode remain nonconductive, causing the current path to lie close to the light beam. This oxide-free (and therefore strain-free) current confinement should result in improved reliability and simplified fabrication. Moreover, the favorable spatial light-to-current correlation may enhance the differential efficiency of our PT-VCSEL.

We grew our PT-VCSELs (see Figure 1) by molecular-beam epitaxy. The resonator consists of 29 pairs of p-doped and 26.5 pairs of n-doped AlGaAs-GaAs-based mirrors, forming two distributed Bragg reflectors (DBRs). These mirrors have simulated lossless reflectivities of 99.91% for the top mirror (with a deposited metal contact) and 99.87% for the bottom mirror. The active zone, which consists of three InGaAs QWs (for lasing operation at 1034nm), and the pnp-structure of the PT (with a calculated current gain of approximately 8500) are both placed inside the cavity. The 6nm-thin α-QW has an absorption coefficient of ∼3500cm−1 at the lasing wavelength (confirmed by spectral investigations).

To determine the performance of our new concept for current confinement, we used a current source to complete a series of optical and electrical measurements on the unprocessed wafer. A 1μm-radius tungsten probe tip and the sample holder served as electrical contacts (on the surface and the back side, respectively), and resulted in a very high voltage drop because of the high contact resistance. Without the integrated PT, lasing activity was not expected (because of strong current spreading). The light-current-voltage (LIV) characteristics depicted in Figure 2, however, clearly show lasing operation at currents higher than 30mA. We consider this performance as proof of the success of our novel current-confinement concept. We observe the turn-on point of the optical switch at a current of 26.5mA, as indicated by the narrow negative-differential-resistance region in the IV curve. The top DBR is terminated by an anti-phase layer and the metal tip locally increases the mirror reflectivity, which means that this area is selected for lasing. The in-phase area is extremely small, however, and cannot support a stable laser mode. This may be the reason for the oscillations in the LI curve shown in Figure 2. Such behavior is not expected in the case of a regularly deposited metal contact because the diameter of the high-reflectivity area under a metal contact is wide enough for a stable mode to be established. 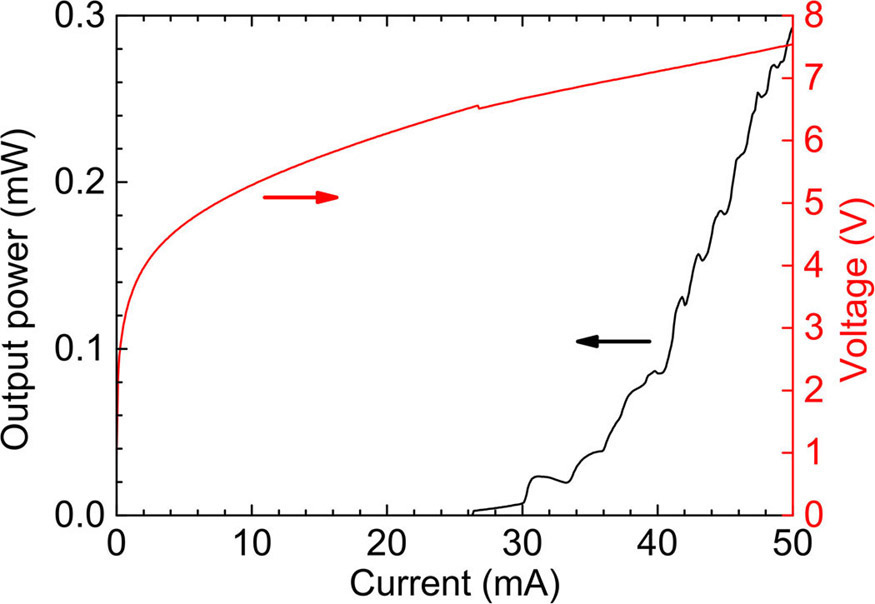 Figure 2. Light-current-voltage characteristics of light emitted from the top of the wafer material before any further processing and without electrical contacts.

To force bottom-emitting behavior in our PT-VCSELs, we placed circular metal contacts (titanium/platinum/gold) on the surface of the wafer.11 The diameters of the contacts vary from 10 to 150μm, and the bottom contact consists of a coarse metal grid (to enable the passage of light). Before the optical switch opens, there is a strong lateral current flow in the p-doped mirror layers. To limit this current spreading, and thereby achieve the current density required to initiate the turn-on process, we etched mesa structures along the top contact into the n-reflector: see Figure 3(a). We then reduced the turn-on current to the μA-range. The LI characteristics of the bottom-emitting PT-VCSELs with different mesa diameters are depicted in Figure 3(b). The threshold current is independent of the mesa size, and remains almost constant at about 6mA. This behavior demonstrates that our PT-VCSELs are not mesa-confined. We thus attribute the current confinement in our structures entirely to the built-in optical switch. CCD camera observations show that the active current aperture grows in diameter with an increasing current, implying that the current confinement is still rather weak. This may be because the optical switch is too light-sensitive, thereby causing the surrounding areas of the light beam to become conductive. Shifting the turn-on current towards the threshold current, by either decreasing the current gain of the PT or by reducing the absorbance of the α-QW, should lead to stronger confinement. 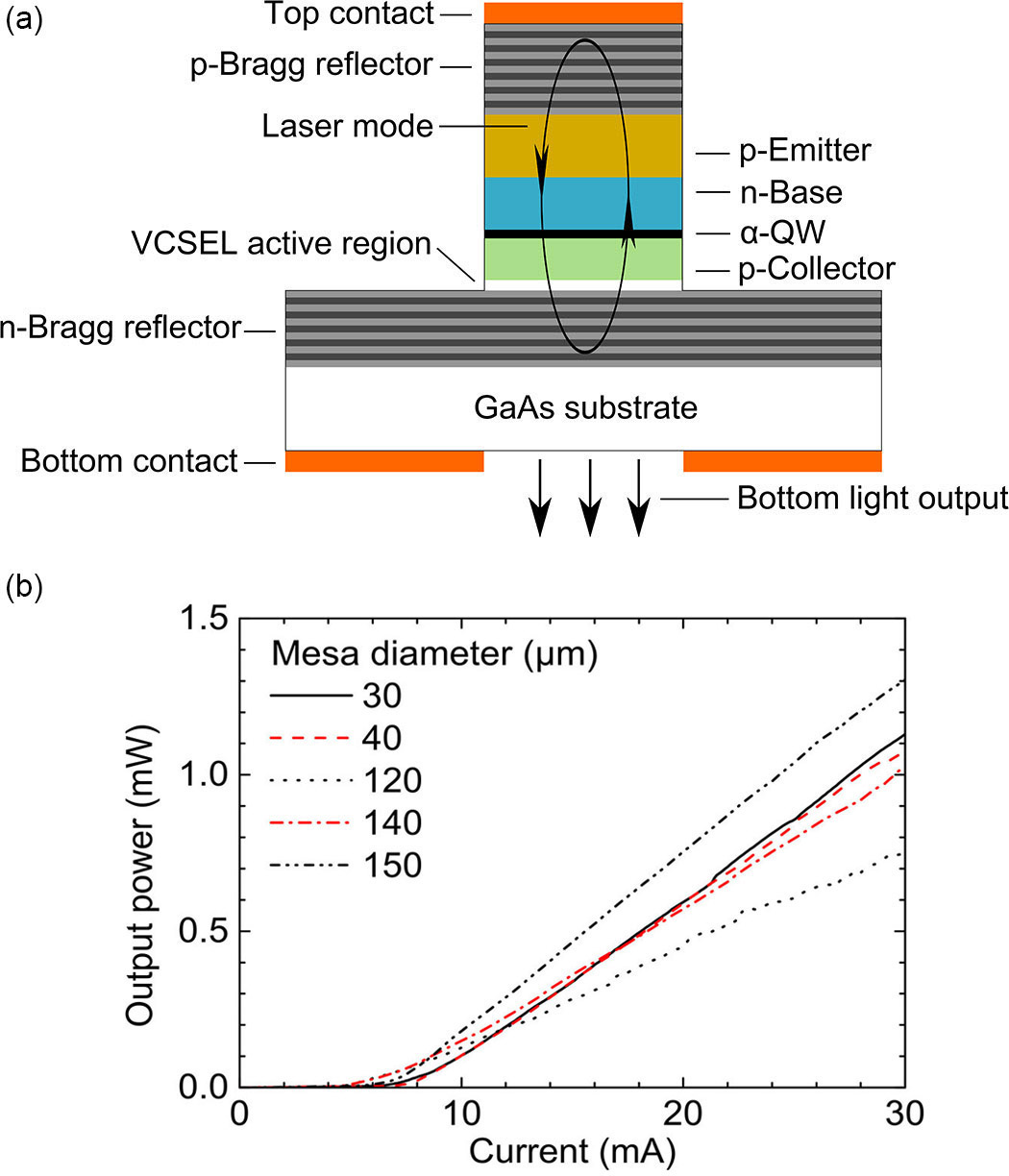 In summary, we have developed an oxide-free method for current confinement in VCSELs based on the principle of an optical switch. This switch is introduced by monolithically integrating a phototransistor into the laser cavity. In the next step of our work, we plan to modify the layer structure to increase the current confinement in future devices, and to obtain a stable current aperture for operation over a wide range of laser currents. Ultimately, we expect this novel type of VCSEL to exhibit improved long-term reliability.

Sven Bader received his MSc in electrical engineering from Ulm University in 2014. His current PhD research focuses on the design, processing, and characterization of VCSELs with optically controlled current confinement.