Semiconductor lasers are ubiquitous in everyday applications ranging from the Internet to medicine. Practically every laser application is affected by laser speed and stability properties. Stable operation is important for spectroscopy and optical clocks, while high-speed response is essential for optical communication schemes. When coupled to the outside world, or to one another (as in photonic integrated circuits), conventional semiconductor lasers often undergo instabilities that give rise to irregular and unpredictable oscillations in the intensity of the emitted light.1–3 These chaotic oscillations occur on a timescale of tens to hundreds of picoseconds and underpin modern laser applications, including instability-based sensing,4, 5 chaos-based secure optical communication,6 as well as ultrafast information processing,7 and random-number generation.8 Therefore, proper understanding of laser instabilities is of great importance for applications.

According to semiclassical laser theory, and as evidenced by several experiments, lasers can be successfully described by three dynamical variables that evolve over time (t):9 a complex-valued electrical field, E(t), within the optical resonator; a complex-valued polarization, P(t), of the active medium (caused by field-induced electric dipoles); and a real-valued population inversion, N(t), of the active medium (accounting for excited electrons). While all three variables are important for laser stability, much less is known about effects of the active-medium polarization dynamics than the other two variables. The reason is that in conventional semiconductor lasers, the active-medium polarization equilibrates much faster than E(t) and N(t), and its dynamics can be adiabatically eliminated. This means that P(t) follows the changes in the more-slowly varying E(t) and N(t), but it does not influence the time evolution of E(t) and N(t). Thus, the majority of previous nonlinear laser studies have focused on the dynamics of the electrical field and population inversion alone. However, recent technological advances in quantum-cascade lasers10 and polariton lasers11 (which are being developed for applications in optical interconnects and quantum information) have led to fundamental changes in the laser active medium. As a consequence, all three laser variables evolve on similar timescales and adiabatic elimination of the active-medium polarization dynamics may no longer be possible. In other words, one has to consider the influence of P(t) on the time evolution of E(t) and N(t). These recent advances give rise to a technologically relevant question: What are the effects of active-medium polarization dynamics on laser stability and instabilities?

We have employed modern mathematical concepts to investigate the affect of active-medium polarization dynamics on laser stability. We demonstrate, for the first time and contrary to general belief, that the additional degrees of freedom afforded by the active-medium polarization dynamics may stabilize a laser. These findings are intriguing yet robust as they occur over a wide range of operating conditions and design parameters. They also impact on a new generation of semiconductor light emitters.

To understand why our results are counterintuitive, consider a solitary laser without any external disturbances. The three dynamical variables provide enough degrees of freedom for the ultimate instability. Indeed, chaotic dynamics akin to the famous ‘butterfly effect’12 were predicted and demonstrated in an experiment with a solitary IR ammonia laser.13 Such instability is no longer possible following adiabatic elimination of the active-medium polarization, because of insufficient degrees of freedom. Hence, one may jump to the conclusion that additional degrees of freedom, arising from the active-medium polarization dynamics, generally destabilize the laser. Our work shows that an opposite, stabilizing effect is also possible. To illustrate the stabilizing effect, we analyze the laser response to external disturbances, using a combination of traditional stability analysis and modern mathematical concepts of shear-induced instability.14 We view a laser device as a nonlinear oscillator whose natural frequency depends on the magnitude of E(t), P(t), or N(t). This effect is known as amplitude-phase coupling, self-phase modulation, or simply shear. 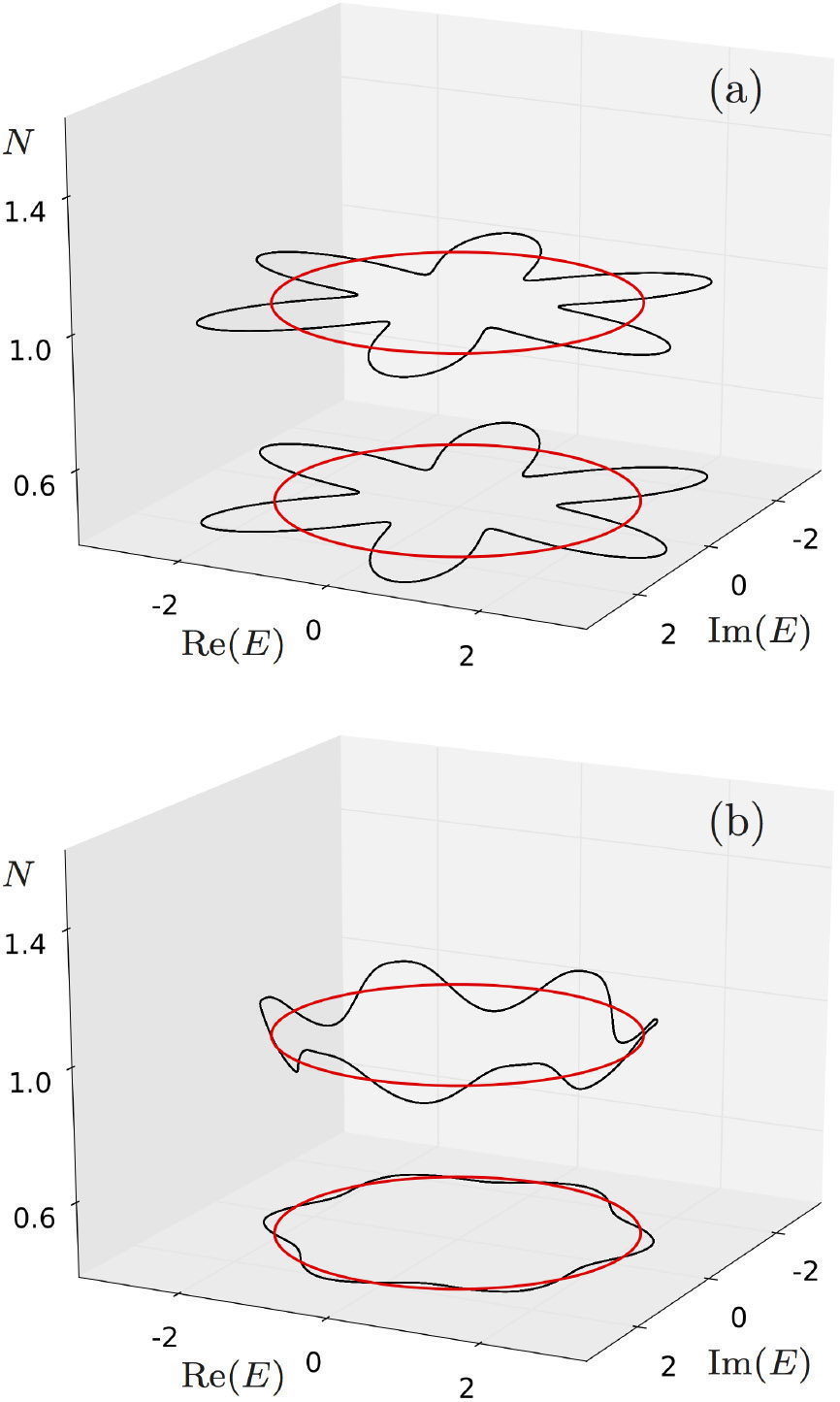 Figure 1. The three-dimensional (E , N ) laser phase space showing the stable lasing state—red periodic orbit—and its disturbance—black curve—evolving from (a) the initial time to (b) some later time in the absence of shear. N is the population inversion of the active medium, Re(E) is the real part, and Im(E) is the imaginary part of the complex-valued electrical field, E. 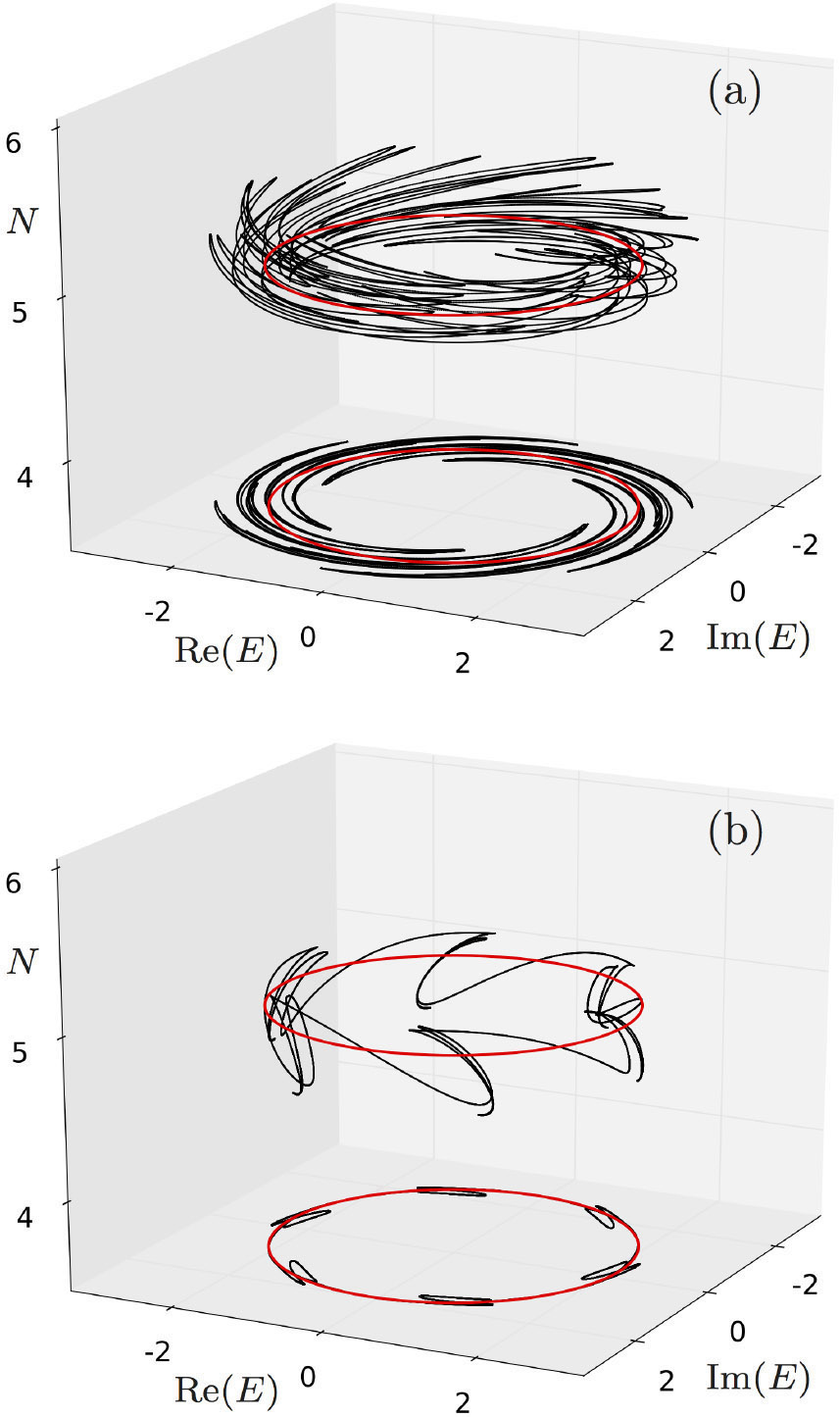 Figure 2. Effects of shear on the time evolution of the disturbance—black curve in Figure 1(a)—in a semiconductor laser (a) without and (b) with active-medium polarization dynamics.

In the new generation of semiconductor lasers, where the active-medium polarization dynamics play a role, shear is much less understood and may no longer be quantified by a single parameter.15 Moreover, we have shown that, rather surprisingly, the additional degrees of freedom may suppress the stretch-and-fold action. The response to the disturbance in Figure 2(b) exhibits some stretching and folding but to a far lesser extent than in conventional semiconductor lasers. Guided by this observation, we demonstrated that polarization dynamics can suppress externally induced instabilities for two canonical laser configurations in nonlinear laser studies: a laser with external optical injection and a laser with time-delayed optical feedback.16

Recent technological advances in semiconductor lasers give reason for revisiting the effects of active medium polarization dynamics on laser stability. It has been known since the 1980s that polarization dynamics may destabilize a laser into chaos, although this requires special laser design. We have now demonstrated that an opposite, stabilizing effect is possible over a wide range of design parameters. Next, we will investigate the stabilizing mechanism in more detail to better understand its impact on a new generation of semiconductor lasers.

Sebastian Wieczorek is a professor (chair) of applied mathematics.

Weng Chow is a distinguished member of the technical staff.