Tactile sensors and ‘electronic skin’ made from 2D materials could be worn on the body to enable continuous monitoring of motion.

2D materials that feature mechanical and optical properties can also exhibit various electrical characteristics.1, 2 Each material, depending on its electronic structure, can therefore be described as a semimetal, semiconductor, or insulator. Graphene, for example, possesses semimetallic properties, and can be used for transparent electrodes. Molybdenum disulfide and tungsten diselenide can be applied in devices that require a semiconductor instead of conventional bulk 3D materials. Boron nitride, which has insulating properties due to its wide bandgap, can be useful for atomic-scale gate dielectric and encapsulation layers.1–5

One potential application of these 2D materials is flexible and wearable tactile sensors,4, 5 which would attach closely to the skin and thus enable healthcare monitoring devices. Until now, however, limitations in the sensitivity and mechanical flexibility of the materials have hindered the development of wearable tactile sensors for direct integration onto human skin or cloth.

To overcome these limitations, we have developed a very flexible 2D material-based tactile sensor in a conformal format (i.e., for use next to the skin) using a molybdenum disulfide semiconductor as a strain sensor and graphene as a transparent electrode.5 Both 2D materials have great mechanical flexibility and optical transmittance. In addition, molybdenum disulfide semiconductors exhibit high sensitivity and reliability for the sensor channel, and graphene electrodes have good contact properties and conductivity.

To produce a 2D material-based tactile sensor, we used a chemical vapor deposition technique to synthesize high-quality, large-area molybdenum disulfide and graphene. Next, we transferred a 2.2×2.2cm molybdenum disulfide film to interdigitated graphene electrodes. The electrodes were integrated in a silicon dioxide wafer that we had coated with a thin epoxy film and patterned using photolithography and plasma etching. The area of the unit cell was 2.10 × 1.85mm, and the interdigitated structure channel was 37.9mm wide and 0.05mm long: see Figure 1(a). We then detached the device substrate (which included a polymer layer) from the handling wafer. The freestanding device film had a total thickness of 72.3nm (comprising a 1.4nm molybdenum disulfide bilayer, a 0.9nm triple layer of graphene, a 35nm epoxy passivation layer, and a 35nm substrate). The film enables conformal contact with an even surface such as a fingertip. Figure 1(b) shows the optical image of a tactile sensor printed on a fingertip to demonstrate an electronic skin application. The scanning electron microscope image in Figure 1(b) (inset) shows the molybdenum disulfide strain gauges (yellow) and graphene electrodes (blue) conformably placed on fingerprint ridges. 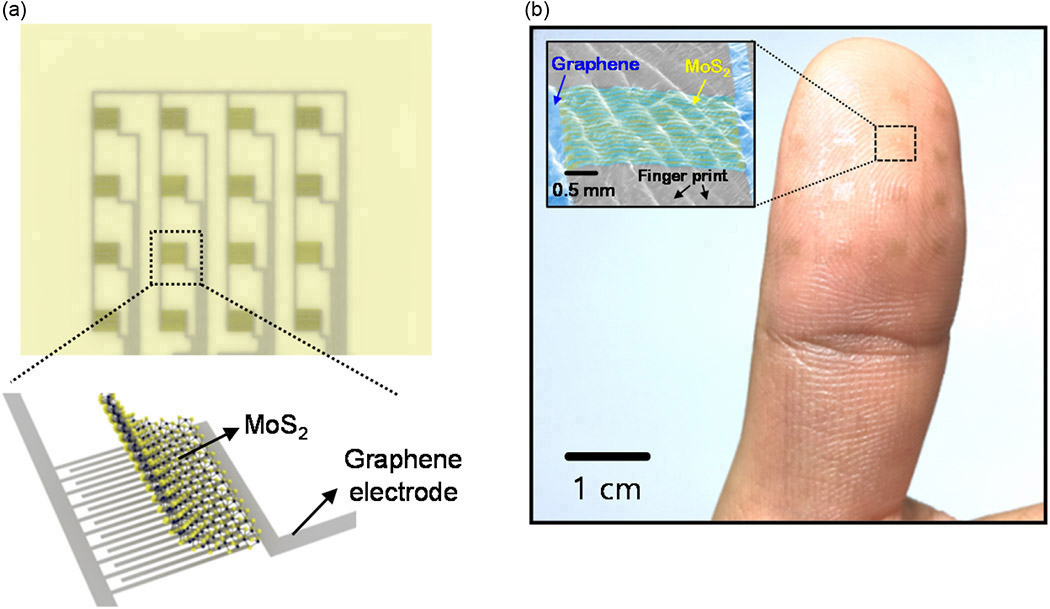 The molybdenum disulfide strain gauge displayed linear behavior without any hysteresis below a strain of –1.98% with respect to compressive strain. It showed an irreversible change in resistance because of the creation of microscale defects such as microcracks in the range from –5.23 to –1.98%, and exhibited an abrupt increase in resistance at a strain of –5.23% due to macroscopic cracks. The gauge factors were evaluated as −72.5±1.9 and –56.5±4.8 under compressive and tensile strain, respectively, in the linear region. These values are more than one order of magnitude larger than for conventional metal strain gauges (∼2−5), and are comparable with polycrystalline silicon (∼20−40). The tactile sensors with thicknesses of 72.3nm and 50.0μm displayed stable output characteristics in response to normal pressure ranging from 0 to 100kPa with a step of 20.0kPa: see Figure 2(a). Notably, the thin device indicated a clear response in a lower range of pressure levels with a 1.24kPa step. This level is comparable to the threshold values of human skin, which are in the range of 1–40kPa. Figure 2(b) shows the pressure measurement data of the molybdenum disulfide tactile sensor when we brushed a stylus pen of 2mm diameter quickly over the fingertip. We tracked the movement of the pen carefully to ensure accuracy and a fast response, and achieved both by exploiting the high sensitivity of the molybdenum disulfide strain gauges. 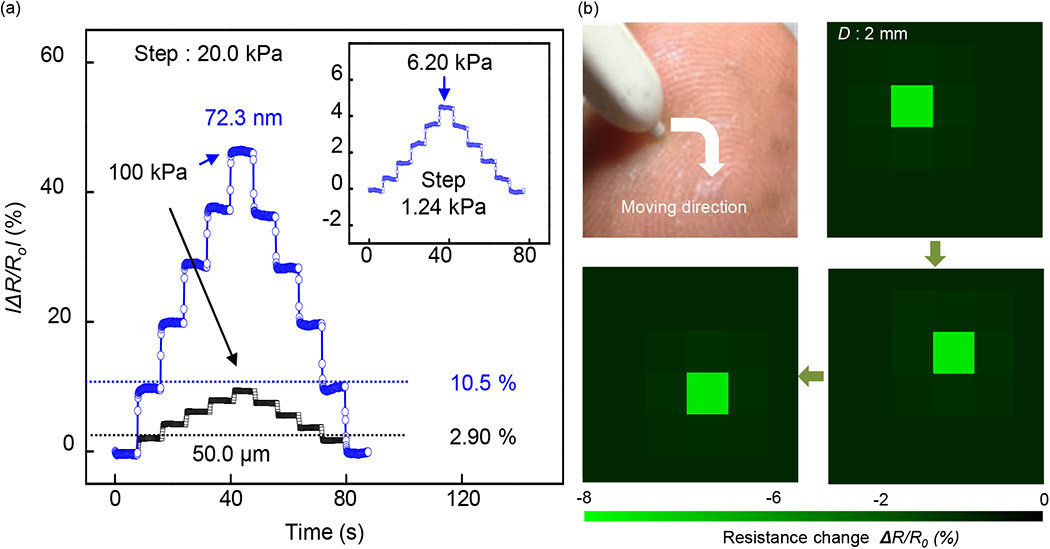 In summary, we have reported the applicability of 2D materials in tactile sensors and electronic skin that can be worn on the body to monitor motion. We used conformal contact to fabricate wearable devices for use on the fingertip. These devices showed good output characteristics (sensitivity and repeatability) for wearable sensors, providing a new route to the development of wearable applications, such as E-skin. In future work, we will seek to address critical challenges to the application of these sensors, such as ensuring the production of high-quality 2D materials and new device architectures.