Over the past few decades, organic LEDs (OLEDs) have been extensively studied. These devices have promising properties (e.g., high electroluminescence efficiency, flexibility, light weight, and low manufacturing cost) and have thus found various applications, such as in flat-panel displays and solid-state lighting.1, 2 In modern OLEDs, highly conductive transport layers are used to reduce injection barriers and to allow low operation voltages.3–5 In these so-called pin-OLEDs, vertical current transport works efficiently within a stack size of about 100nm. Operating OLEDs at high excitation levels, however, remains a major challenge. This is because of the influence of various exciton quenching mechanisms,6, 7 which result in a reduction of the external quantum efficiency (known as efficiency roll-off).8 Moreover, Joule heating (conversion of electric current energy to heat, caused by high currents) results in thermal breakdown of the devices.9–11 Reaching high current densities, however, is a key prerequisite in achieving electrically pumped organic semiconductor lasers (OSLs) because high exciton densities have to be realized within the lifetime of the light-emitting states. Achieving OLEDs that can sustain high current densities (in the range of about 1kA/cm2) is thus an important step in the development of an electrically driven OSL.12–14

Joule heating of OLEDs can be reduced through the use of a short pulse excitation7, 15,16 or from the use of highly thermally conductive substrates.10 Nonetheless, operating OLEDs at high excitation, i.e., above the lasing threshold,17 has not yet been achieved. Furthermore, to realize an electrically pumped OSL, the OLED structure must obtain optical feedback (e.g., from an optical microcavity). Organic semiconductors have low electrical conductivity, and metal contacts are therefore required for the injection of high current densities. Including metal in an optical path, however, causes the optical quality factor to deteriorate (because of metal absorption). In addition, metal contacts in an optical microcavity cause a change to the mode structure. These new states—known as Tamm plasmon polaritons—can lead to an increase in the lasing threshold.18, 19

In this work,20 we introduce a new OLED structural concept with which light emission from a metal-free region can be achieved. With our new OLED structure we can thus circumvent many of the obstructions to realizing an electrically pumped OSL. We have also conducted experiments and simulations to demonstrate the feasibility of our design concept.

In our OLED design, the emission zone is expanded laterally in the metal-free area. We achieve this by extending the layer sequence—see Figure 1(a)—with transparent, yet conductive, layers. Given the overlap of the electrodes—compare Figure 1(b) and (c)—a substantial amount of emission occurs outside the originally active area. Furthermore, we can avoid the use of transparent oxide electrodes (e.g., indium tin oxide) by using two highly conductive metal electrodes as contacts in our device. In this way, the new lateral transport layer (LTL) acts a matching layer between the highly conductive (but opaque) electrodes and the less conductive organic transport layers. The lateral current transport is therefore increased, and the emission zone is extended into the metal-free areas, without a strong increase in the absorption of the layer stack.

Figure 1. (a) Plan view of opaque electrodes in an organic LED (OLED) structure. The electrodes are arranged perpendicularly to each other (crossbar electrodes) on the substrate. (b) Schematic diagram of a standard OLED, which has a p-doped/intrinsic/n-doped (pin) layer structure. Emission occurs mainly from the overlapping area of the top electrode. (c) When additional lateral transport layers are inserted into the standard OLED structure, a substantial current flow (denoted by arrows) extends to the metal-free region. The corresponding light emission expands laterally, compared with (a), and can leave the layer stack in both directions (top and bottom) because the LTL still has good transmittance. Red star indicates recombination of charge carriers.

It is also possible to integrate our OLED structure with a pair of distributed Bragg reflector mirrors so that we can realize an organic vertical-cavity surface-emitting laser. In our proposed device all the layers are stacked in a sandwich architecture and can be structured with low-resolution shadow masks, which warrants further investigation. Although we find that the current density decays in the metal-free areas, we can achieve high intensities at the corners of the crossing electrode structure. Our proposed structure could therefore be sufficient for the realization of an electrically pumped OSL, because high excitation densities are only required in an area that is comparable to the size of the transverse mode of an organic microcavity laser.21

We can also reduce the amount of Joule heating in our OLED structure by changing the position of the transport layers within the layer stack, as shown in Figure 2(a). We place the doped transport layers above or below the top and bottom electrodes, respectively, and thereby cause the injection of charge carriers within the emission layer to be locally suppressed in the metal-covered area. The current flow instead occurs in the highly conductive LTL, which leads to a lateral current distribution in the metal-free area. Since the vertical current depends only on the applied voltage between the electrodes, the emission intensity from the metal-free areas remains unchanged compared with a conventional OLED design and new layer structures. With our device, we achieve a total current decrease of at least one order of magnitude (and a corresponding reduction in power dissipation), as shown in Figure 2(b). Thermal breakdown is thus shifted to higher voltages, which enables higher current densities (close to the lasing threshold of about 1kA/cm2) in the metal-free area. With our experiments, we have also demonstrated high current densities outside the electrode that are sustained over an area of a few micrometers. 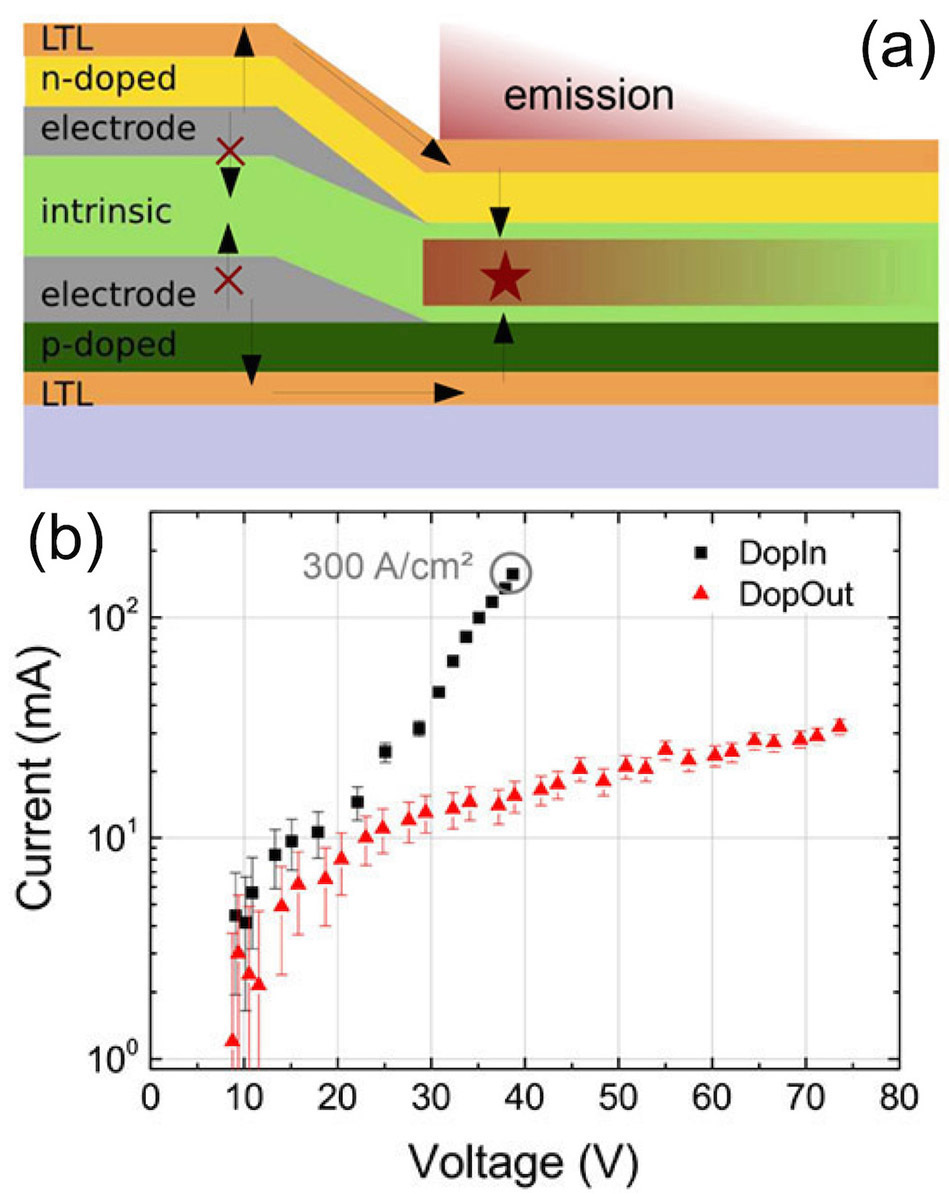 Figure 2. (a) The new OLED structure in which the position of the doped transport layers within the stack has been changed. This causes current injection in the emission layer to be suppressed to the metal-covered area. Recombination of the charge carriers only occurs in the metal-free area. (b) Total vertical current in the proposed structure (DopOut) is lower than in a conventional OLED (DopIn), by at least an order of magnitude. Thermal breakdown of the device (caused by self-heating) therefore occurs at higher voltages and enables higher current densities in the metal-free area.

In summary, we have developed a novel OLED structure that can be used to help realize an electrically driven organic semiconductor laser for the first time. In our proposed structure, we insert lateral transport layers into a standard OLED stack and thus cause light emission from a metal-free region. We also achieve high current densities for areas outside the electrode. In our future work we plan to improve the device structure to increase the maximum current density. Furthermore, we will combine the OLED stack with a Fabry-Perot resonator to investigate the mode structure under optical and electrical excitation. Our devices can also be easily integrated within an optical microcavity, and they therefore truly open up the possibility of realizing an electrically driven OSL.