Vertical-cavity surface-emitting lasers (VCSELs) that operate at 850nm and are based on oxide-confined apertures are widely used in optical interconnects in data centers, supercomputers, wireless backbone networks, and consumer applications.1 As the processor productivity in these applications increases, it is necessary to continuously improve performance and scale transmission speeds accordingly. In recent years, developers have produced a generation of devices capable of transmitting 40Gb/s at moderate current densities,2, 3 and they have recently demonstrated 54Gb/s non-return-to-zero transmission through 2.2km of multimode fiber.4 Now, 108Gb/s per wavelength transmission can be realized over 100–300m of multimode fiber through the use of advanced modulation formats: discrete multi-tone,5 multiCAP,6 and PAM4.7 All of these achievements are made possible through the use of VCSELs operating in a single transverse and longitudinal mode (SM VCSELs).

When manufacturing SM VCSELs, developers typically make the oxide aperture in a VCSEL very small (around 2–3μm in diameter). This approach, however, may result in very low optical power, high resistance, and low manufacturing yield. To extend single-mode behavior toward more conventional aperture sizes (5–7μm), several alternative approaches have been proposed, including surface patterning, etching, overgrowth, and ion implantation in combination with photonic crystals.8, 9 These approaches require additional processing steps that must be precisely aligned (oxide aperture and surface pattern). The resulting complexity can reduce the yield and increase the cost of manufacturing.

Our approach uses oxide-confined leaky VCSELs, which—through the application of proper epitaxial design—enable the generation of high optical leakage losses for high-order transverse modes. Using these devices, we extend the single-mode behavior of the laser toward large oxide aperture diameters.

With our approach, we aim to create an additional cavity at a wavelength longer than the VCSEL cavity mode. Upon oxidation, the relative intensity distribution of the optical field between the coupled cavities can be strongly affected in the oxidized section. This induces a break in the orthogonality of the VCSEL mode and the second cavity mode (when at a certain tilt angle), which enables in-plane leakage to occur. High-order modes with the field intensity maxima close to the oxide periphery have thus much higher leakage losses.10

We have designed and manufactured oxide-confined leaky VCSELs and observed their leakage process through tilted narrow lobes in the far-field spectrum. The emission comes from the area outside the aperture, and thus does not suffer from diffraction-induced broadening. To model the VCSELs in 3D, we applied finite element analysis based on Maxwell's vector equations in a rotational symmetric system.11

Figure 1 shows a cross section of the simulated electric field of the fundamental and first excited optical modes of an oxide-confined aluminum gallium arsenide-based leaky VCSEL. A simulated far-field profile of the excited mode can be seen in Figure 2. The simulations show that the leakage effect results in a specific tilted emission over the VCSEL surface at ∼35–37°. Most of the intensity of the leaking light is channeled in the direction parallel to the surface. 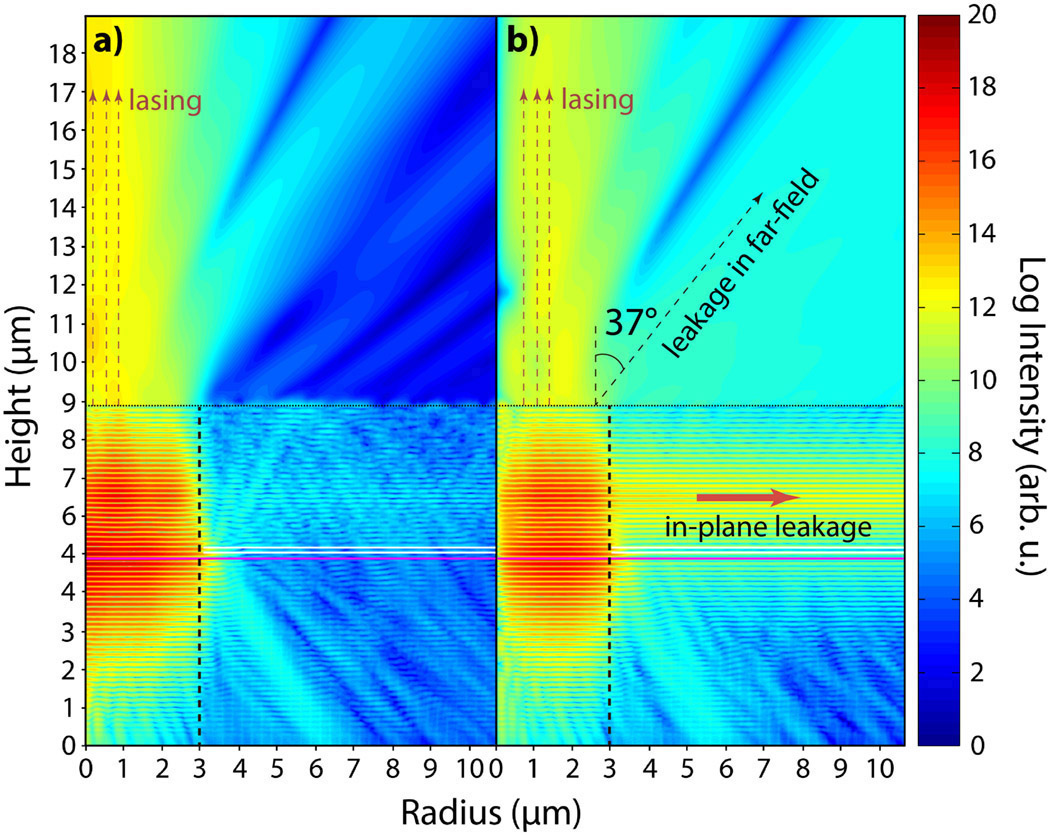 We manufactured and tested VCSELs according to our design. The far-field measurements of the devices at two current densities can be seen in Figure 3, which shows that at high current densities during multimode operation, narrow lobes arise at ∼35° angles. These lobes are related to the leakage process (see Figure 2).

Electroluminescence spectra of the leaky VCSEL at different current densities are shown in Figure 4. We concluded that the VCSEL was predominantly single mode at all the current densities examined, despite the relatively large aperture diameter (5μm). In contrast, the non-leaky VCSEL with thick oxide apertures was heavily multimode, with the excited modes dominant even at small current densities.12 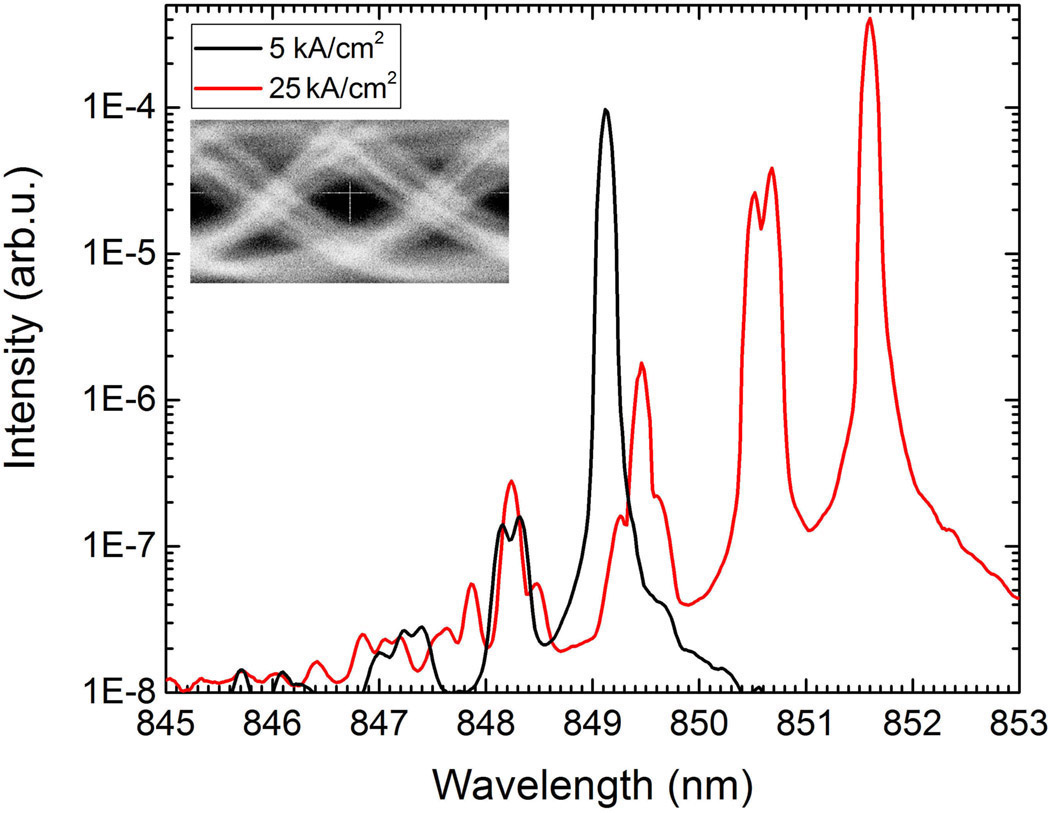 Figure 4. Electroluminescence spectra of an oxide leaky VCSEL with a 5μm aperture. The graph shows dominance of the fundamental mode up to high currents (5.5mA, red). Insert: An optical eye diagram (PRBS7) at 32Gb/s.

To summarize, we have shown that it is possible to significantly improve VCSEL spectral quality without involving any additional processing steps. Furthermore, we confirmed the occurrence of in-plane leakage through leakage lobes in the far-field profile of the device. Our findings create opportunities for engineering photonic integrated circuits, for example, by coherent coupling of two or more devices. Therefore, it may be possible to use the technique for beam steering.13 By operating one VCSEL in a couple under reverse bias, it is possible to realize an on-chip integrated monitor photodiode, thus drastically reducing the cost of packaging (since fewer of the elements require alignment and assembly). Our future work will focus on optimization of the leakage effect in order to manufacture high- power and high-speed single-mode VCSELs.

This project received funding from the European Union's Horizon 2020 research and innovation program under grant 666866.

Nikolay Ledentsov Jr. received his MSc in physics at the Technical University of Berlin while developing indium gallium arsenide-based LEDs. At VI Systems he is responsible for the design and numerical simulation of optoelectronic devices, and operates an automated testbed for spectral and high-speed characterization.

Vitaly Shchukin received a diploma in physics and engineering in the field of semiconductor physics from St. Petersburg State Polytechnical University, St. Petersburg, Russia, and a PhD (1987) and doctor of science (1999) in physics and mathematics from the Ioffe Physical-Technical Institute, Russian Academy of Sciences, St. Petersburg. He is co-author of more than 190 published papers, and holds 22 patents and a monograph.

Joerg Kropp holds a doctor of science in the field of atomic physics with optical spectroscopy and laser applications. He has more than 25 years' experience in industry in the field of optical communications through management positions with Siemens and Infineon.

Mikel Agustin received a diploma in telecommunications engineering from the Public University of Navarra, Spain, and completed his education at the Institute of Telecommunications, Warsaw University of Technology, Poland. At VI Systems he is responsible for developing energy-efficient ultrafast vertical-cavity surface-emitting lasers and photodetectors.

Nikolay N. Ledentsov received a diploma in electrical engineering from the Electrical Engineering Institute in Leningrad (LETI, now Electrotechnical University, St. Petersburg, Russia) in 1982. He obtained his PhD (1987) and doctor of science (1994) in physics and mathematics from the Ioffe Physical-Technical Institute. He has been professor of electrical engineering at LETI since 1994 and professor of physics and mathematics at the Ioffe Physical-Technical Institute since 2005.