The abundant and sustained nature of solar energy leaves little doubt that solar cell technology will play a pivotal role in future clean energy strategies. For this reason, considerable research efforts are dedicated to increasing solar cell efficiencies and to thus decreasing module costs. Fundamental physical limitations of standard single-junction solar cells, however, mean that such devices have a maximum theoretical efficiency of about 34%.1 To reduce transmission losses (i.e., lack of absorption) and thereby attempt to circumvent the Shockley–Queisser limit, it may be possible to exploit a process known as photon upconversion (UC). In this process, two low-energy photons are combined to generate a higher-energy excited state. Molecular UC, which involves the use of a small-molecule sensitizer and acceptor pairs, is a particularly appealing method for overcoming the Shockley–Queisser limit because it enables UC efficiencies of >40% (even at sunlight intensities).2, 3

In molecular UC, the sensitizer molecule absorbs low-energy light and transfers the energy to the acceptor molecule. When two excited acceptor molecules are in proximity they undergo triplet–triplet annihilation (TTA), and thus generate one high-energy excited state. In UC-assisted solar cells, UC materials are used as a filter or back reflector that is coupled to a traditional solar cell, and they thus offer a promising method for harnessing sub-bandgap light.4 This filter strategy, however, can suffer from losses caused by self-absorption, and it requires additional design components that may increase the complexity and manufacturing cost. In 2008, an alternative strategy was proposed in which TTA-UC was integrated directly into the solar cell.5 By directly extracting charge from the upconverted state before emission, there are no losses from self-absorption. It is therefore possible to achieve theoretical efficiencies upwards of 49%. 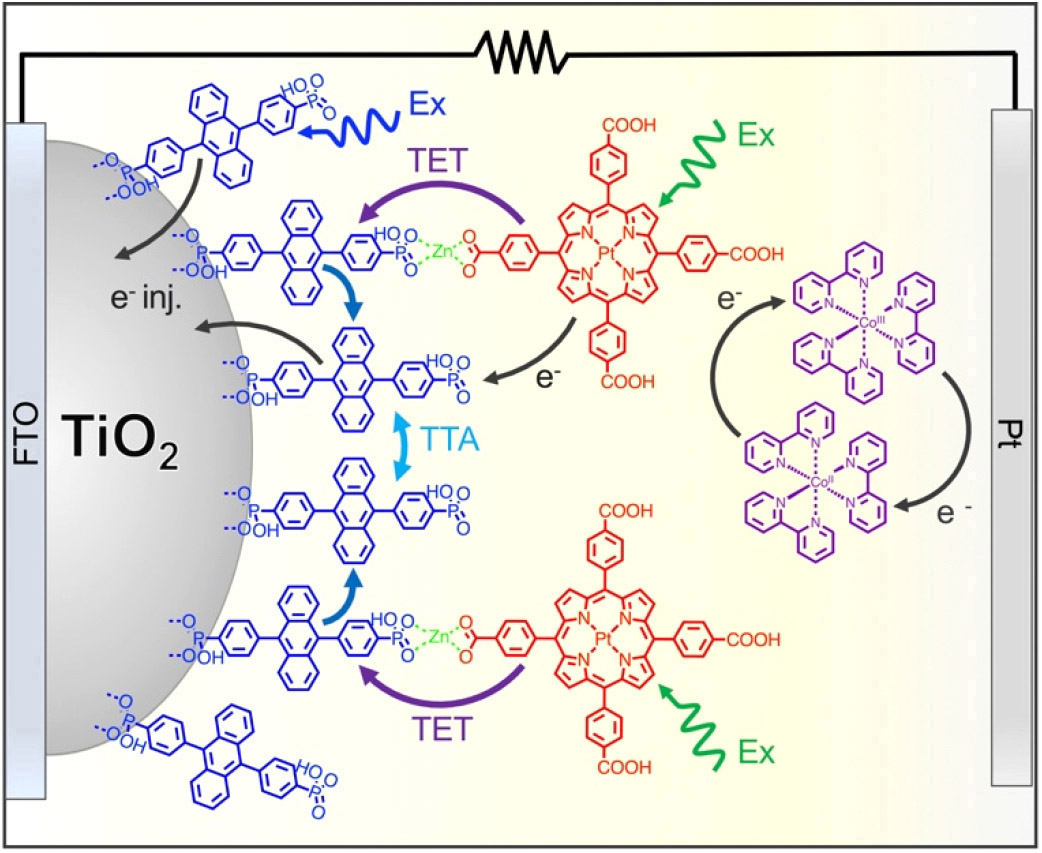 In our experiments—for a bilayer assembled on zirconium dioxide—we observed green-to-blue UC emission. In addition, the bilayer exhibited a quadratic-to-linear excitation intensity dependence that is indicative of TTA-UC.7 Following these successful results, we fabricated a dye-sensitized solar cell composed of the bilayer (on titanium dioxide) as the photoanode, platinum as the counter electrode, and cobalt(II)tris(2,2'-bipyridine) as the redox mediator (see Figure 1).

Despite having similar absorption cross sections, we found that the short circuit current (Jsc) for our bilayer device (0.028mA/cm2) was more than five times greater than devices that featured only the sensitizer (0.005mA/cm2) or the acceptor (0.002mA/cm2). We attribute this Jsc enhancement to a TTA-UC photocurrent generation mechanism. Indeed, with excitation at 532nm—see Figure 2(a)—we find that the bilayer exhibits a quadratic- or linear-intensity-dependent behavior (i.e., slopes of 2 or 1, respectively), which is indicative of a TTA-UC mechanism.7 In contrast, when we use 366nm light to directly excite the acceptor molecule—as in Figure 2(b)—the bilayer exhibits a linear dependence, which is expected for a single-molecule photoexcitation–electron injection process. 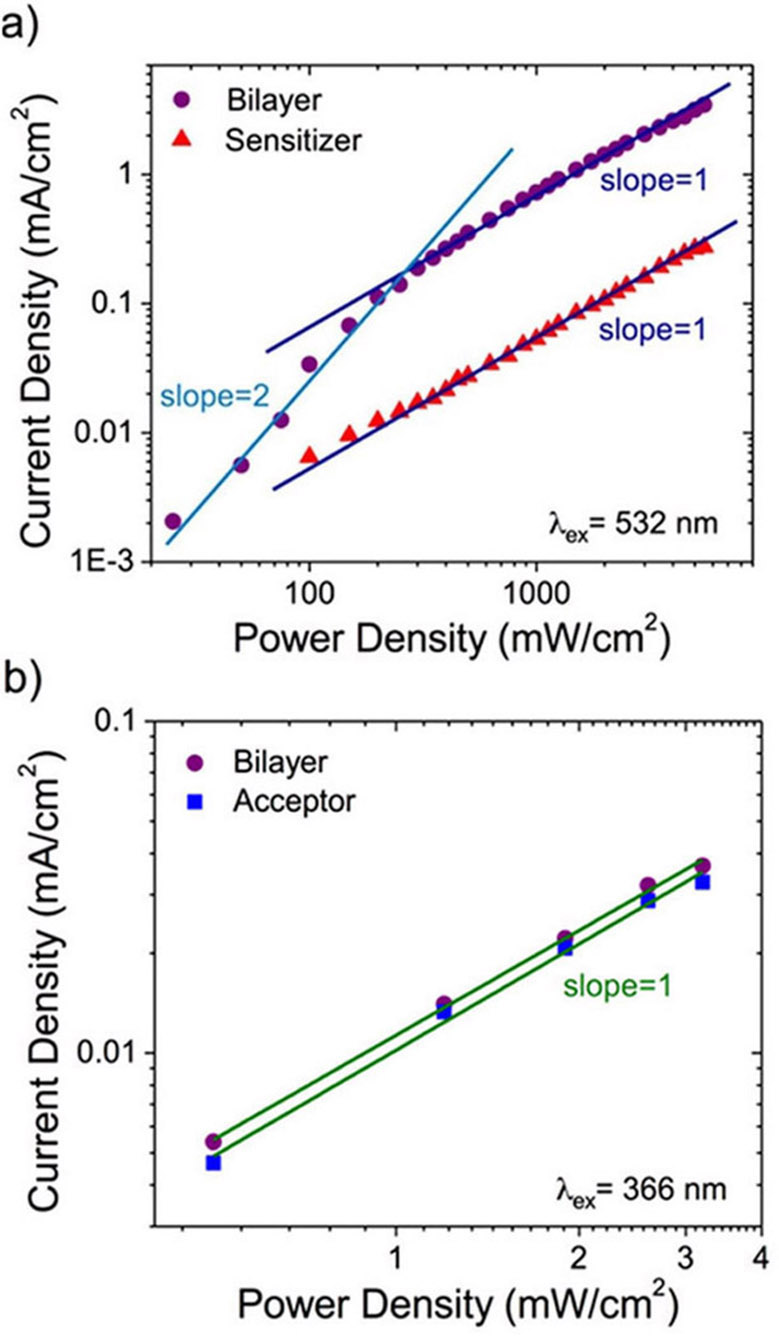 Figure 2. Experimentally measured current density of the bilayer, sensitizer, and acceptor molecules in the dye-sensitive solar cell, shown as a function of the power density for excitation wavelengths (λex) of (a) 532nm and (b) 366nm.

These results indicate that the bilayer film effectively harnesses sunlight and generates photocurrent through two different mechanisms. The first mechanism—see Figure 3(a)—involves direction excitation, electron injection from the acceptor molecule, electron transfer, and finally regeneration from the mediator. In contrast, the second mechanism—see Figure 3(b)—includes low-energy light absorption by the sensitizer molecule, energy transfer, TTA-UC, electron injection from the upconverted state, followed by electron transfer and regeneration.8 Our work thus represents only the second example of an integrated TTA-UC solar cell. The first,9 relied on a heterogeneous TTA-UC scheme.10, 11 The efficiency of our bilayer device (1.6 × 10−5%), however, is at least an order of magnitude higher than that achieved with the previous integrated TTA-UC solar cell. 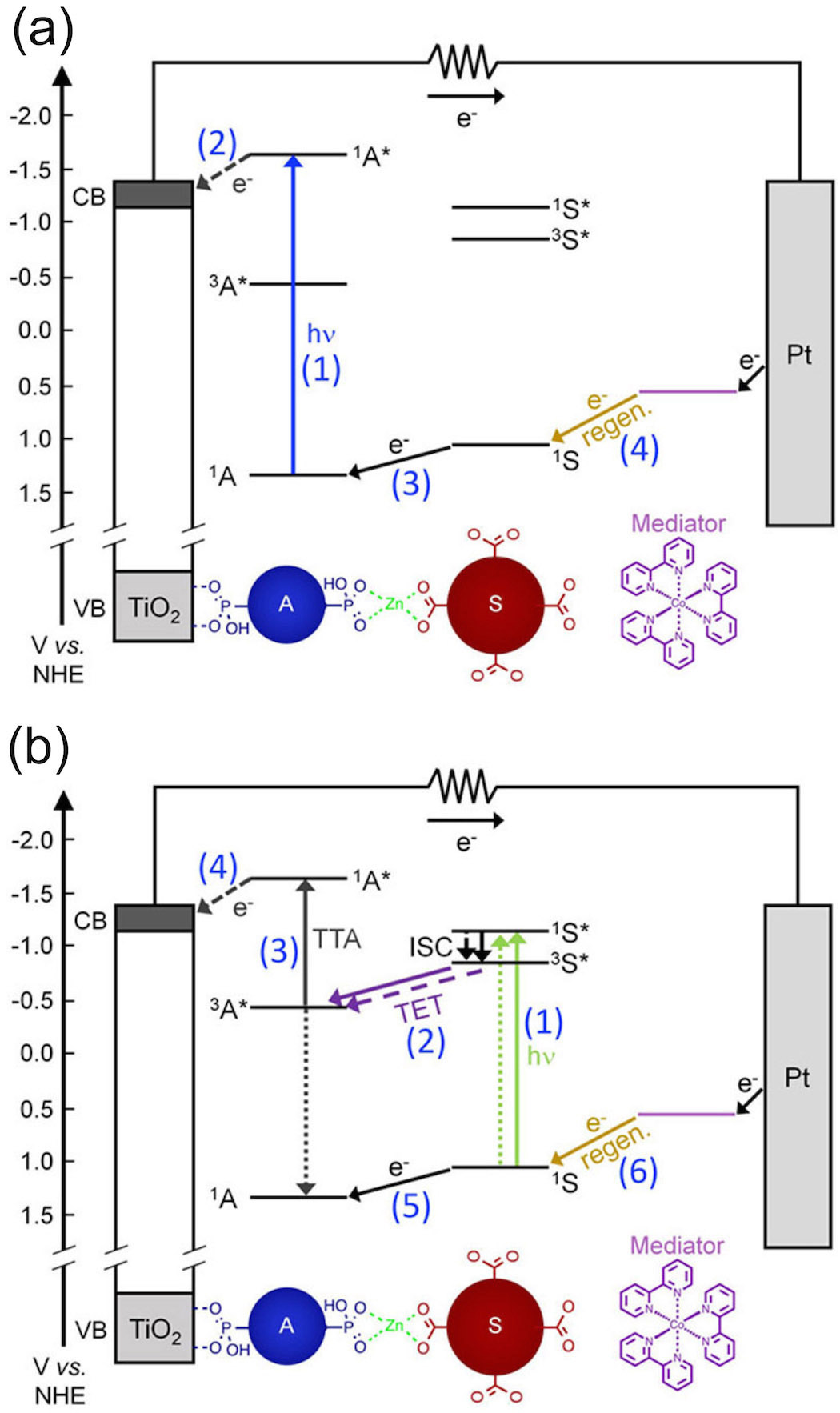 Figure 3. The proposed photocurrent generation mechanism under (a) high-energy and (b) low-energy light (hv). 1A, 1S and 3A, 3S denote the singlet and triplet states of the acceptor (A) and sensitizer (S) molecules, respectively, and * denotes excited states. Blue labels in (a) indicate (1) direct excitation, (2) electron injection from the acceptor molecule, (3) electron transfer, and (4) regeneration (regen.) by the mediator. In (b) the labels mark (1) low-energy light absorption by the sensitizer, (2) energy transfer, (3) TTA-UC, (4) electron injection from the upconverted state, (5) electron transfer, and (6) regeneration. V: Voltage. NHE: Normal hydrogen electrode. CB: Conduction band. VB: Valence band. ISC: Intersystem crossing.

In summary, we have experimentally demonstrated self-assembled bilayers as an effective strategy to incorporate TTA-UC directly into a dye-sensitized solar cell. The efficiency of our device is the highest yet achieved for an integrated TTA-UC solar cell, but to surpass the Shockley–Queisser limit we need to make several modifications to our approach. Our future work will therefore include shifting the sensitizer absorption into the near-IR region. We will also broaden the low-energy absorption through the use of multiple sensitizers that have complementary absorption features. In addition, we will increase the cross-surface energy transfer and TTA rates, as well as work to reduce the number of non-productive quenching events.

Kenneth Hanson is an assistant professor in the Department of Chemistry and Biochemistry, and is affiliated with the Materials Science and Engineering program. His research is primarily focused on manipulating energy and electron transfer dynamics on organic–inorganic interfaces for solar energy conversion and other applications.

Sean Hill is a third-year graduate student studying molecular self-assembly at organic–inorganic interfaces and the application of photon upconversion to photovoltaic devices. He has a BS in chemistry from Louisiana State University, where he studied patterning of silyl-terminated alkyl chains on surfaces.