Quantum communications offer secure and fast information exchange between distant parties. To realize these links requires the building of quantum networks that incorporate stationary quantum nodes separated by large distances and photons (information carriers), which establish entanglement between the nodes1 (see Figure 1). Because such networks suffer unavoidable photon losses, enabling robust quantum communication over lossy transmission channels requires quantum memories with long coherence times to reliably store the incident photon states at any given node on the network.2 Hence, a quantum node should have the ability to coherently absorb/emit and store the information encoded in the photon state onto a memory element that has very long coherence times. Further, to maximize the entanglement among the nodes, each node should have additional processing qubits for entanglement purification (extracting perfect entangled states from imperfect ones)3 or to perform quantum error correction.

Figure 1. Schematic of a quantum network that shows photons connecting remote quantum nodes (diamonds). The absorption of photons from an entangled photon source (EPR) establishes entanglement between the quantum nodes. The highlighted section (left) shows a photon being coherently absorbed and stored in the single nuclear spin of a diamond.

Over the last two decades, substantial research has gone into finding a system that meets all the requirements for a functional quantum node. Some systems offered high absorption rates for single photons, while others offered long storage times and high-fidelity processing of single photons with very low absorption rates. Developers have therefore concluded that a hybrid quantum system, composed of different physical components with complementary functionalities, is the ideal candidate for quantum information processing.4

An example of a quantum hybrid (spin) system is the nitrogen-vacancy (NV) defect center in diamond (a point defect in the diamond lattice), which comprises electron and nuclear spins. The NV electron spin enables interaction with photons,5 high-fidelity control,6–8and readout,9 but its surrounding nuclear spins are well isolated from their environment, and thus yield very long coherence times. As a result, nuclear spins make natural candidates for information storage and electron spins enable a spin-photon interface. In addition, electron and nuclear spins form a multi-qubit quantum register, which enables quantum information processing.8 Entanglement of distant electron spins (separated by 1.5km)10 via photons has already shown promise in investigations of the use of diamonds as efficient quantum nodes in a quantum network. Therefore, we sought to demonstrate faithful transfer and storage of photons in these nodes.

We used a hyperfine coupled electron and 14N nuclear spin of a single NV center in diamond as the basis for our study. To achieve storage of a photon in a single nuclear spin required three steps. First, we undertook Bell state preparation of the electron-nuclear spin system. Next, we carried out optical transfer, and finally we measured the electronic spin state (heralding). We started with the NV center spin system prepared in an initial Bell state

. A photon in polarization state

and in resonance with an electronic optical transition, A1, was absorbed by the NV center. After absorption of a photon, the nuclear spin was projected onto the state

, which held the phase information of the photon.11 The excited electron decayed back to the three ground states |±1e〉 and |0〉e by emitting a photon, and it was possible to herald the transfer by detecting this photon. This method suffers, however, from a low photon collection efficiency of 2%. As an alternative approach, we can detect the electronic spin state in |0〉e through a high-fidelity single-shot readout technique,9 which also heralds the transfer process. 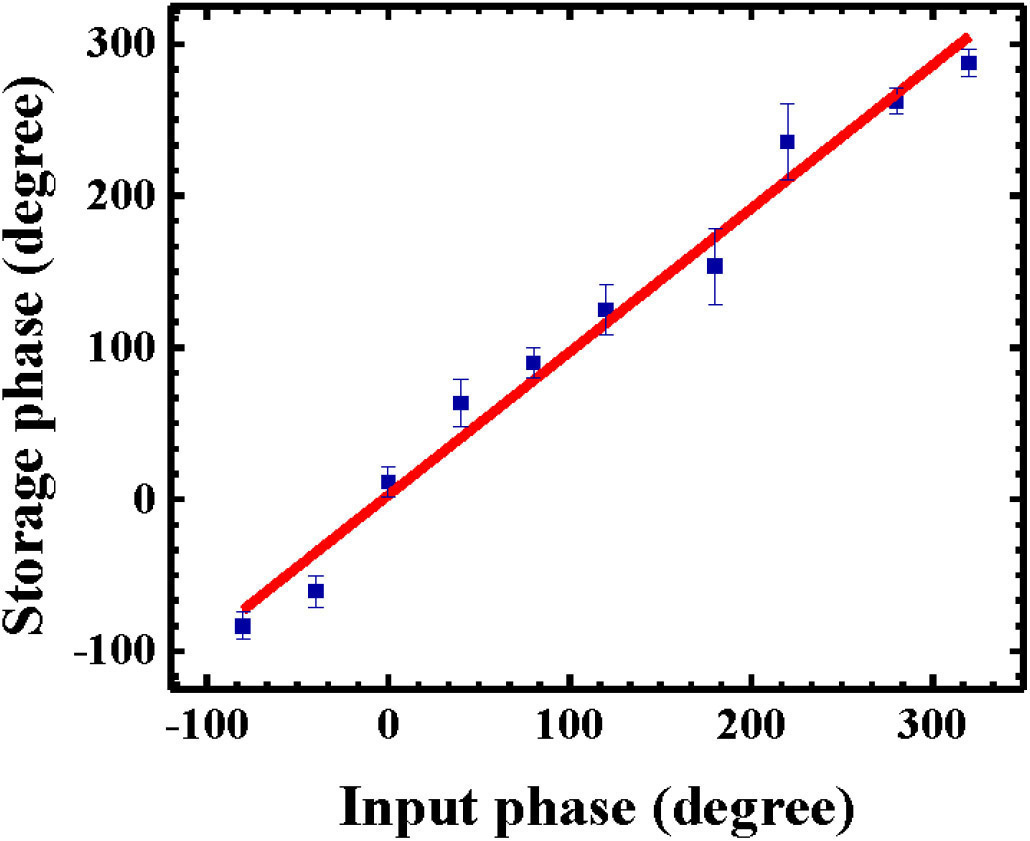 In summary, we have shown that it is possible to achieve the absorption and heralded storage of a photon (polarization state) in a nuclear spin with high fidelity by using a combination of spin-spin, spin-photon Bell state measurements, and single-shot readout of electronic spin states. These results mark a further step toward realizing an absorption-based quantum repeater network that uses solid-state spins in diamond as quantum nodes. We may in future extend our studies to generate entanglement among the outgoing (emitted) photons12 by repetitively entangling the electron with the emitted photon and transferring it to the nuclear spin. With this ability, the solid-state spins in diamond could themselves represent standalone components in a quantum repeater network without the need for additional entangled photon pair sources.

The authors acknowledge support from the European Research Council project Solid State Quantum Technology and Metrology Using Spin, DFG SFB/TR21, EU projects Diamond based atomic nanotechnologies, Simulators and Interfaces with Quantum Systems, and Quantum Interfaces, Sensors, and Communication based on Entanglement, JST-DFG (FOR1482), as well as the Volkswagen Foundation.