Discoveries regarding the behavior of light in nonlinear media (i.e., nonlinear optics) triggered the evolution of modern photonics. Developments in this field have led to a large variety of applications, such as nonlinear harmonic generation and mixing, pulse compression, optical amplification, signal processing, and sensing.

Generally, nonlinear interactions depend on the local field intensity, at powers that are predefined by the order of the interaction (e.g., a power of two for second harmonic generation, SHG, a second-order nonlinear process).1The introduction of nanostructures made from noble metals—which support highly localized electromagnetic modes, called surface plasmons—allows for very high field enhancement in photonic devices. These materials have therefore attracted much attention as candidates for the realization of a variety of concepts designed to enhance nonlinear effects. Metals themselves are also inherently nonlinear due to the complex response experienced by a free-electron gas to external stimulation from an incident electromagnetic wave. Combining metal nonlinearity and nanostructuring leads to very strong enhancement of the effective third-order nonlinearities in plasmonic metamaterials.2

The situation is more complicated in the case of second-order nonlinearity in centrosymmetric metals. Typically, phenomenological models (which rely on experimental retrieval of nonlinear susceptibilities) are used to describe the nonlinear response of plasmonic nanostructures. In recent work, we obtained a qualitative description of this nonlinear interaction. We used a hydrodynamic approach in which the electron plasma is treated as a charged fluid.3, 4 In addition to the electric and damping forces, which define a linear optics Drude response, the hydrodynamic equations include convective acceleration, Lorenz forces, and (in the advanced description) a quantum-pressure contribution. This last contribution gives rise to nonlocal effects. Each of these terms leads to nonlinear behavior, which ultimately defines the nonlinearity in the optical properties of centrosymmetric metals.4 Even in an earlier perturbative implementation, which enables the analytical treatment of nonlinearities, we found the hydrodynamic description to reveal interesting and important phenomena in nanoscale optics. Among these are a criterion of the efficient nonlinear generation of nanoscale SHG modes (the analog of the macroscale phase matching condition),5 and the prediction of cascaded second-order surface plasmon solitons.6

Based on this initial work, we recently developed a robust time-domain numerical description of hydrodynamic nonlinear electron dynamics in metallic nanostructures.7 Our approach addresses this nonlinear behavior without any simplification. The nonperturbative numerical model reveals that a key contribution to the nonlinear effect is defined by the interplay between the topology of the nanostructure and the nonlocal response of the metal, which becomes important at the nanoscale.

Generally, nonlocality is the result of strong coupling between adjacent unit cells in a material—either in natural crystals or artificial materials (metamaterials)—or many-body effects in solid-state systems.8, 9 Hydrodynamic nonlocality provides a typical example of strong electron-electron interactions between quasi-free electrons in a metal plasma. This kind of nonlocality has been proven to describe a variety of phenomena that govern the optical response of small plasmonic structures. The nonlocal effects become important at length scales of less than the mean-free path of electrons (i.e., a few nanometers). Particularly, nonlocality can lead to the generation of fractional harmonics, as the quantum pressure term contains a fractional power of the electron density.

Using a numerical model, we investigated the nonlinear scattering spectra of gold Archimedian nanospirals with a cross-sectional size of 70nm and an arm width of 12nm: see Figure 1(a).7 Such spirals have no symmetry of any kind and are therefore good candidates for the study of nonlinear optical interactions. In our numerical model, the quantum-pressure term can be either included or excluded, making it possible to investigate the impact of nonlocality on nonlinear light generation. The nanoscale nature of nonlocal effects can be seen in the nonlinear scattering response of the 12nm metallic nanorods: see Figure 1(b). The intensity generated between integer harmonics in the nonlocal case is enhanced compared to the local one, indicating the presence of fractional harmonics. For 200nm nanorods, on the other hand, no difference was observed. We found that the effect of nonlocality, manifesting itself in the broadband supercontinuum generation, is much more pronounced in the case of the spiral nanostructure, for which nonlocality is important (because of its nanoscale arm size). The nonlocality originates from collective electron-electron interactions, which give rise to distinct fractional harmonics through the quantum-pressure term. These interactions provide an efficient pathway for enhancing frequency mixing between conventional integer harmonics. The supercontinuum generation is further facilitated by an abundance of nanospiral modes at higher frequencies. Furthermore, the nanospiral has a key advantage over the nanorod because its resonance can be tuned to the chosen frequency of the pump light. Under such resonant excitation, the SHG can be further increased by seven orders of magnitude. This increase corresponds to an effective nonlinear susceptibility of 600pm/V, which is a value 20 times larger than that of lithium niobate,7 providing a pathway to a new class of highly nonlinear nanoscale structures and metamaterials. 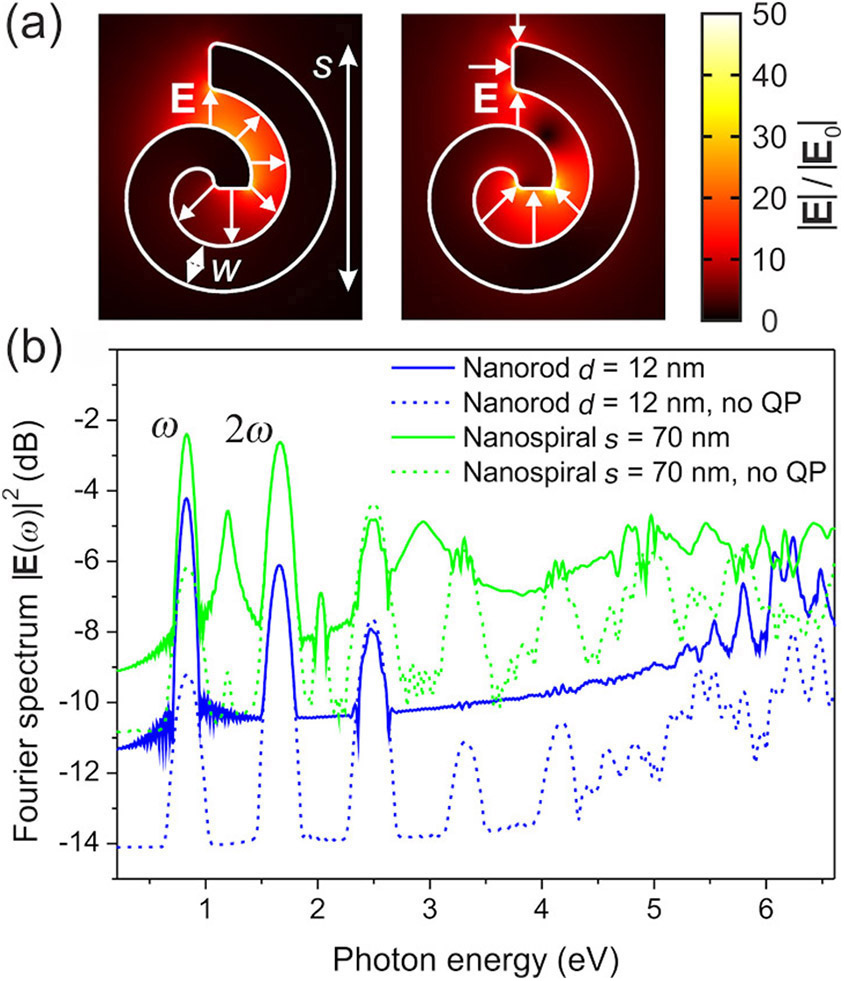 Figure 1. (a) The electric-field enhancement map for the first two nanospiral resonances. The white arrows show the direction of the local electric field. ||/|0|: Amplitude of the local electric field normalized to the incident field. (b) Nonlinear scattering spectra obtained using our full hydrodynamic model. Far-field intensity of the nonlinear signal with linear scattering subtracted (|(ω)|2) for nanospirals and nanorods with different parameters. d: Nanorod diameter. s: Nanospiral size. w: Nanospiral arm width. Labels ω and 2ωmark the positions of the fundamental and second harmonic frequencies, respectively. Results were obtained using an excitation pulse of ∼50fs and a wavelength of 1500nm. Solid and dashed lines correspond to the hydrodynamic model with and without the nonlocal quantum-pressure (QP) term, respectively.

By demonstrating nonlocality-driven harmonic generation from plasmonic nanospirals, we have uncovered a pathway for the investigation of a novel class of nonlinear phenomena in metallic nanostructures. These phenomena, determined by the nonlocality of the electron response, may find numerous applications in nanoscale nonlinear optics. Our method provides a universal tool for investigating the nonlinear response of arbitrarily shaped complex nanoscale plasmonic structures illuminated by ultrashort excitation pulses of any profile, chirp, and intensity. In our future work, we will investigate the role of boundaries on the nonlocal nonlinear response of individual plasmonic nanostructures in different materials. We also intend to study a variety of plasmonic assemblies (e.g., metasurfaces) using this approach.

Alexey V. Krasavin received his BSc and MSc (both with honors) from the Moscow Institute of Physics and Technology. In 2006, he received a PhD in physics from the University of Southampton and joined Queen's University Belfast as a research fellow. Since 2010 he has been working at King's College London.