A bilayer system is used in a simplified process to achieve reduced costs compared with standard fabrication methods that are based on organic photoresists.
01 July 2016
Danilo De Simone, Ming Mao and Geert Vandenberghe

A major current trend in lithography is the development of exposure tools that have ever-shorter wavelengths, with the overall aim of achieving mass production of devices with sub-10nm feature sizes. Extreme UV lithography (EUVL) at a wavelength of 13.5nm is the main candidate for next-generation lithography technology.1 Highly sensitive resist materials, however, are required for EUVL so that its high-power exposure source requirements can be reduced.2

Until now, chemically amplified resists (CARs) have been used in EUVL.3 CARs are formulated by adding an organic polymer, a photoacid generator, and a quencher species together (see Figure 1). Although such resists have good sensitivity, they also have a number of associated problems. For example, the resolution of chemically amplified resists is strongly affected by pattern collapse, which becomes increasingly important as feature sizes approach the nanometer scale.4 Furthermore, it is challenging to reduce the aspect ratio (film thickness/critical dimension) of CARs because of their high susceptibility to the non-uniform distribution of components in the film. As a result, poor imaging performance tends to be obtained.

In our previous work5 we investigated novel materials for use in EUVL, with a particular focus on metal-oxide materials. This class of materials can be formed by small clusters of metal-oxide organic particles without the need for any of the additional molecular species (i.e., organic polymer, photoacid generator, and quencher species) that are normally used for CARs. The metal-oxide resists we use offer a high etch capability for EUVL because of their intrinsic properties,6 and they can therefore serve as a useful alternative to conventional organic films. Compared with CARs (with optimized film thicknesses), the metal-oxide resists offer the advantage of very thin film thicknesses (as low as 20nm), and they minimize the risk of pattern collapse (see Figure 2). The metal-oxide resists can therefore serve as a thin spin-on patternable hard mask for the subsequent etching step in EUVL. Furthermore, the use of a trilayer system is part of the conventional method for transferring a given pattern to a substrate.7 In this conventional approach, a ‘spin-on-glass’ (SOG) is used as the hard mask that is selectively etched with a traditional organic photoresist.

In our more recent work,8 however, we have proposed a new, simplified process (see Figure 3) that involves direct exposure of a metal-oxide resist on top of a sacrificial carbon layer (SCL), e.g., spin-on-carbon (SOC). In this way, we eliminate the need for the intermediate SOG hard mask in the patterning stack. The metal-oxide resist we use (obtained from Inpria Corporation) has an etch rate that is about 57 times lower than that of an organic resist (using an oxygen-based chemistry), which enables our process simplification. 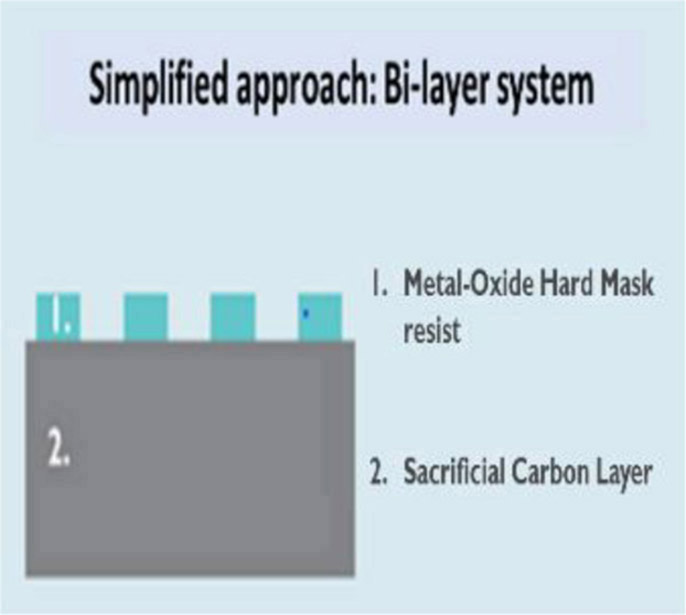 Figure 3. Schematic illustration of the simplified bilayer system in which a metal-oxide hard mask resist is directly printed on top of a sacrificial carbon layer (SCL).

We have also verified the full ‘lab-to-fab’ (i.e., from laboratory to fabrication) process of our metal-oxide photoresist approach.8, 9 In particular, we integrated the metal-oxide resist into our 7nm back-end process module, a block mask layer for metal patterning with pillar dimensions down to 21nm. We have thus demonstrated (see Figure 4) that our scheme is compatible with manufacturing methods in which standard fabrication equipment is used, and that we can achieve a strong lithographic performance.

Figure 4. Cross sections of the 7nm back-end process module (a block mask layer) after the SCL has been exposed. Pillar features were considered at three different pitch sizes. The straight SCL profile and the constant litho-etch CD were measured at all three pitch sizes.

In another part of our recent work, we investigated the pattern transfer capability of a metal-oxide resist for line-space applications. In this experiment, we used a simplified bilayer stack on a 44nm line-space pitch on top of a silicon oxide layer. We measured the critical dimension (CD) and the CD uniformity of the lines at four different process steps through the opening of the silicon oxide layer. Without any specific process optimization, we were able to transfer the pattern through the final silicon oxide layer. We obtained a CD uniformity of 1.3nm for the fabricated line structures, without a significant impact on the line-width or line-edge roughness (see Figure 5). 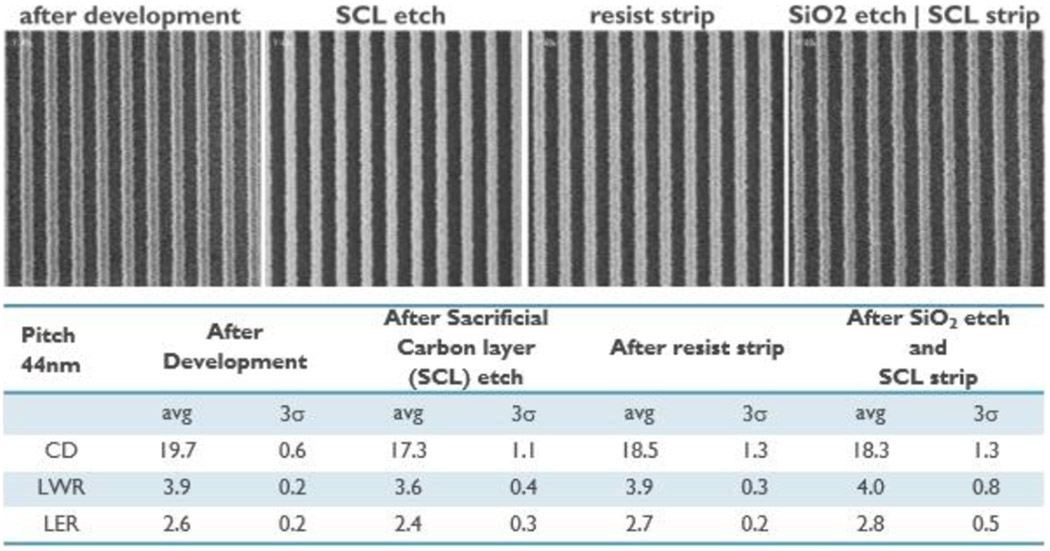 Figure 5. Top: Scanning electron microscope images of a 44nm pitch line-space pattern after four different stages of the pattern transfer process, i.e., after development, deposition on the SCL, removal of the resist, and silicon dioxide (SiO2) exposure with removal of the SCL. Bottom: CD, line-width roughness (LWR), and line-edge roughness (LER) measurements obtained at each of the four stages.

In summary, we have demonstrated that metal-oxide resists are a valid alternative to conventional organic films in EUV lithography. These materials can thus be used in the patterning process for the fabrication of next-generation high-resolution devices that require EUVL on line-space applications. We have also introduced a simplified bilayer system for the direct exposure of the metal-oxide resist on top of a sacrificial carbon layer. In our future work we will continue to explore the potential patterning applications of these materials. We will also determine the compatibility of such metal-oxide resists for high-volume manufacturing purposes.

The authors acknowledge Inpria Corporation for providing the metal-oxide resist and for their technical support.

Danilo De Simone is a principal engineer with research interests in photomaterials for EUV lithography.

Ming Mao is a research and development engineer. His research interests include sub-10nm back end of line patterning with EUV lithography.

Geert Vandenberghe is the manager for exploratory patterning materials research.