The assimilation of any new observational dataset into a numerical weather prediction (NWP) system can affect the quality of the existing datasets, with respect to the model background (the short-term forecast). This, in turn, influences the use of the existing observations within the NWP system. Indeed, it is the standard practice of operational NWP centers to assess the quality of observations with respect to NWP model fields. Furthermore, the importance of using NWP fields to assess the data quality from microwave sensing instruments has already been shown.1–3 The influence of a new dataset—from the Sounder for Atmospheric Profiling of Humidity in the Intertropics by Radiometry (SAPHIR) instrument—on existing NWP models therefore needs to be assessed.

The SAPHIR instrument is a six-channel microwave humidity profiler on the Megha-Tropiques (MT) satellite. The six channels are close to the absorption band of water vapor (at about 183GHz) and thus provide a relatively narrow weighting function, from the surface to an altitude of 10km, for retrieving water vapor profiles in the cloud-free troposphere. The new radiance/brightness temperatures (TBs) from SAPHIR have recently been added to the UK Met Office's Unified Model (UM) assimilation system, which is being used in operations at India's National Centre for Medium Range Weather Forecasting (NCMRWF).

In this work,4 we have performed a detailed investigation of the impact of incorporating SAPHIR radiance data into the UK Met Office's UM (i.e., which is used for NWPs). This UM assimilation system is based on incremental 4D-Var, which is a system used to minimize a cost function (penalty function) in the UM. The 4D-Var system describes the departure of the analysis from the background and the observation, which is distributed within a given time window. The forecast model has a horizontal resolution of 25km (at mid-latitudes) and 70 vertical levels between the surface and 80km altitude. For our data assimilation experiments with SAPHIR, however, we used the UM model with a reduced horizontal resolution of 40km. 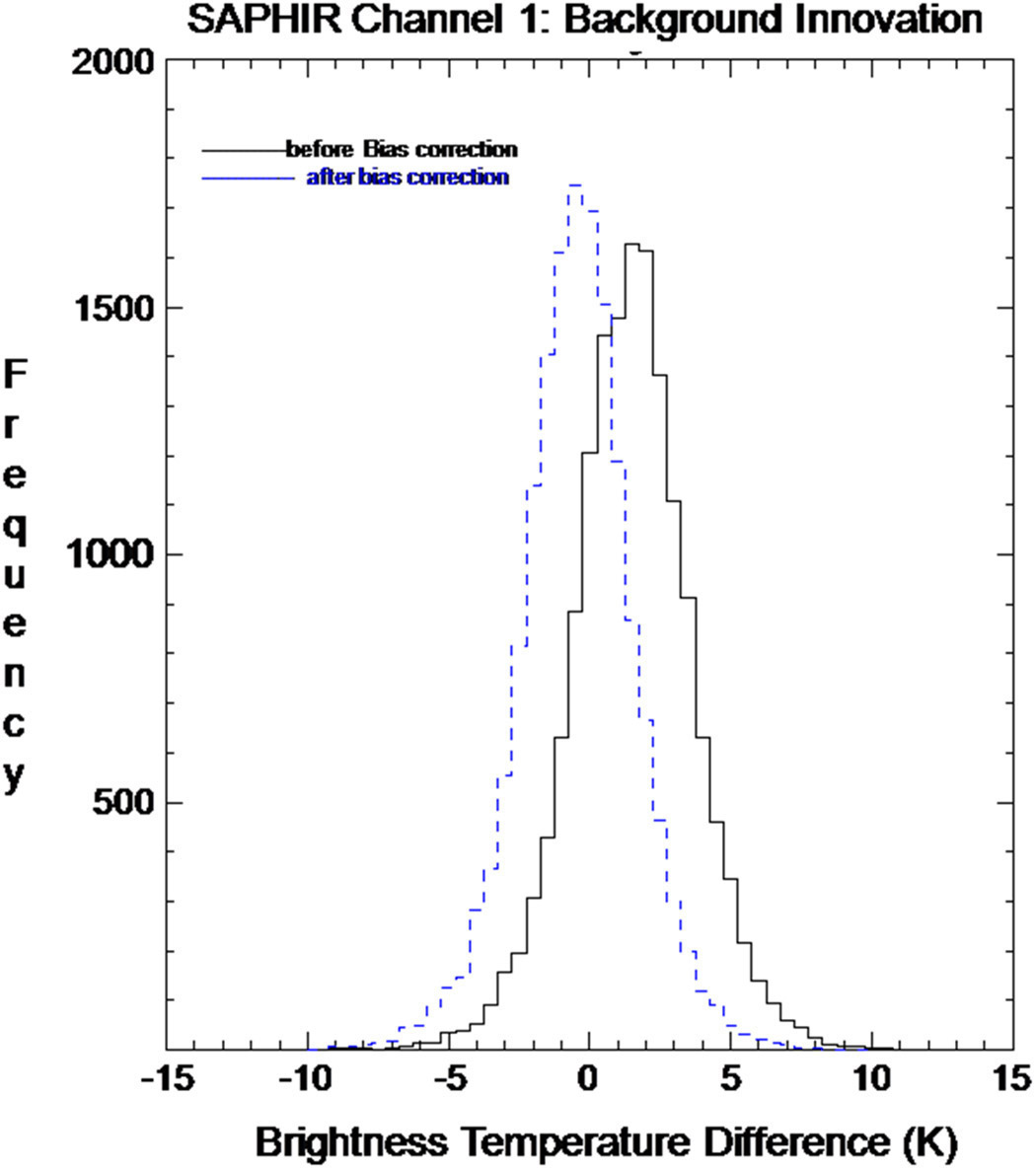 Figure 1. Innovations (differences between the observations and simulations) for the Sounder for Atmospheric Profiling of Humidity in the Intertropics by Radiometry (SAPHIR) channel 1. Results are shown with (blue curve) and without (black curve) bias correction.

Radiances from four hyperspectral instruments—the IR Atmospheric Sounding Interferometer (IASI) on the MetOP-A and MetOp-B satellites, the Advanced IR Sounder (AIRS) on the Aqua satellite, and the Cross-track IR Sounder (CrIS) on the Suomi-National Polar-orbiting Partnership satellite—are routinely assimilated in the UM 4D-Var system. The percentage differences in the mean of the standard deviation and the assimilated observations for our experiment (i.e., including SAPHIR radiances) and our control (without SAPHIR radiances), with respect to the IASI TBs, are shown in Figure 2. We find a negative value for the standard deviation difference, but a positive value for the observation count. This indicates the positive impact of assimilating SAPHIR TBs on the IASI data. In addition, the assimilation of the SAPHIR TBs means that the standard deviation of the TBs from most of the assimilated IASI channels is reduced to 2–2.5%, and that the number of assimilated TBs increases to about 1%. We have also observed similar effects for the other two hyperspectral datasets (from AIRS and CrIS). Although SAPHIR is a microwave instrument, the impact of its assimilation is clear in the use of hyperspectral radiances in the 4D-Var data assimilation system, as well as on other microwave and IR radiance datasets. 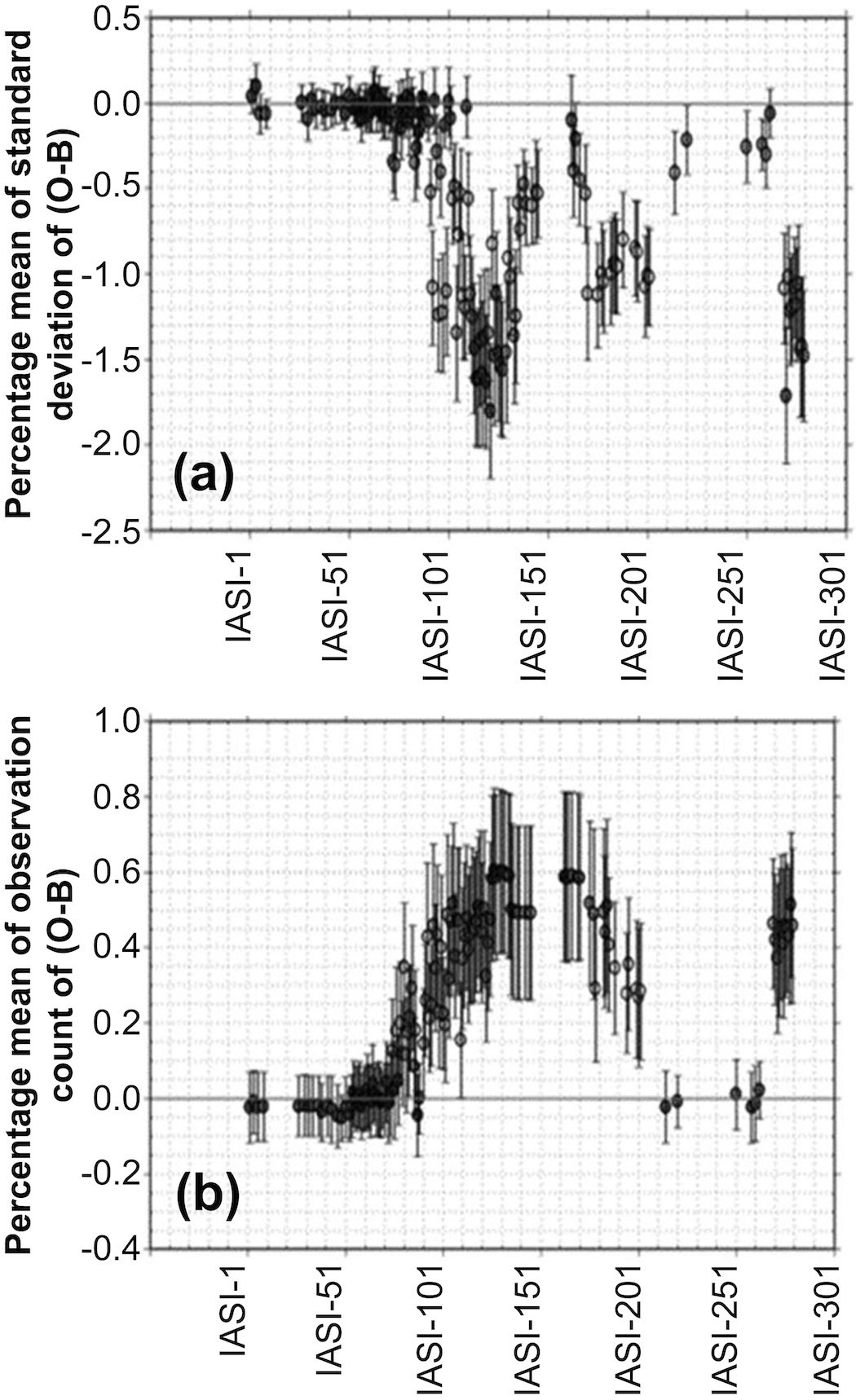 Figure 2. The impact of SAPHIR brightness temperature assimilation on IR Atmospheric Sounding Interferometer (IASI) brightness temperature results (IASI channel numbers are shown on the x-axis). The percentage difference in the mean of the (a) standard deviation and (b) number of assimilated observations, between the experiment run (i.e., with SAPHIR radiances) and the control run (without SAPHIR radiances). O: Observations. B: Simulations.

We have also analyzed the combined effect of various microwave humidity sounders and imagers on hyperspectral radiances. We used humidity information from the Special Sensor Microwave Imager/Sounder (SSMI/S) instruments on Defense Meteorological Satellite Program satellites and from the Advanced Microwave Scanning Radiometer (AMSR-2) on the Global Change Observation Mission-Water (GCOM-W1) satellite, combined with the high-resolution (vertical) SAPHIR data to improve the performance of hyperspectral instruments in the data assimilation system. Our results demonstrated the complementarity of SAPHIR to the other microwave imagers and hyperspectral instruments. For these analyses, we conducted global assimilation experiments relative to a full observing system. We also included a number of additional observations, i.e., from AMSR-2 imager channels, SSMI/S imager channels, SAPHIR sounding channels, and a combination of all three. The effect of these experiments on background fits to hyperspectral IR sounder observations is illustrated in Figure 3. We find that the assimilation of AMSR-2 or SSMI/S imager information leads to improved fits to the IR window channels (around 800–1200cm−1), which are sensitive to column humidity, whereas small degradations are observed for the water vapor sounding channels above 1400cm−1. Furthermore, the assimilation of SAPHIR data tends to generate better fits (i.e., with reduced standard deviations) for both these spectral regions. Assimilating the combination of all the observation types leads to the largest improvements, which suggests that the 183GHz information from SAPHIR can help to constrain vertical humidity increments in the 4D-Var system. 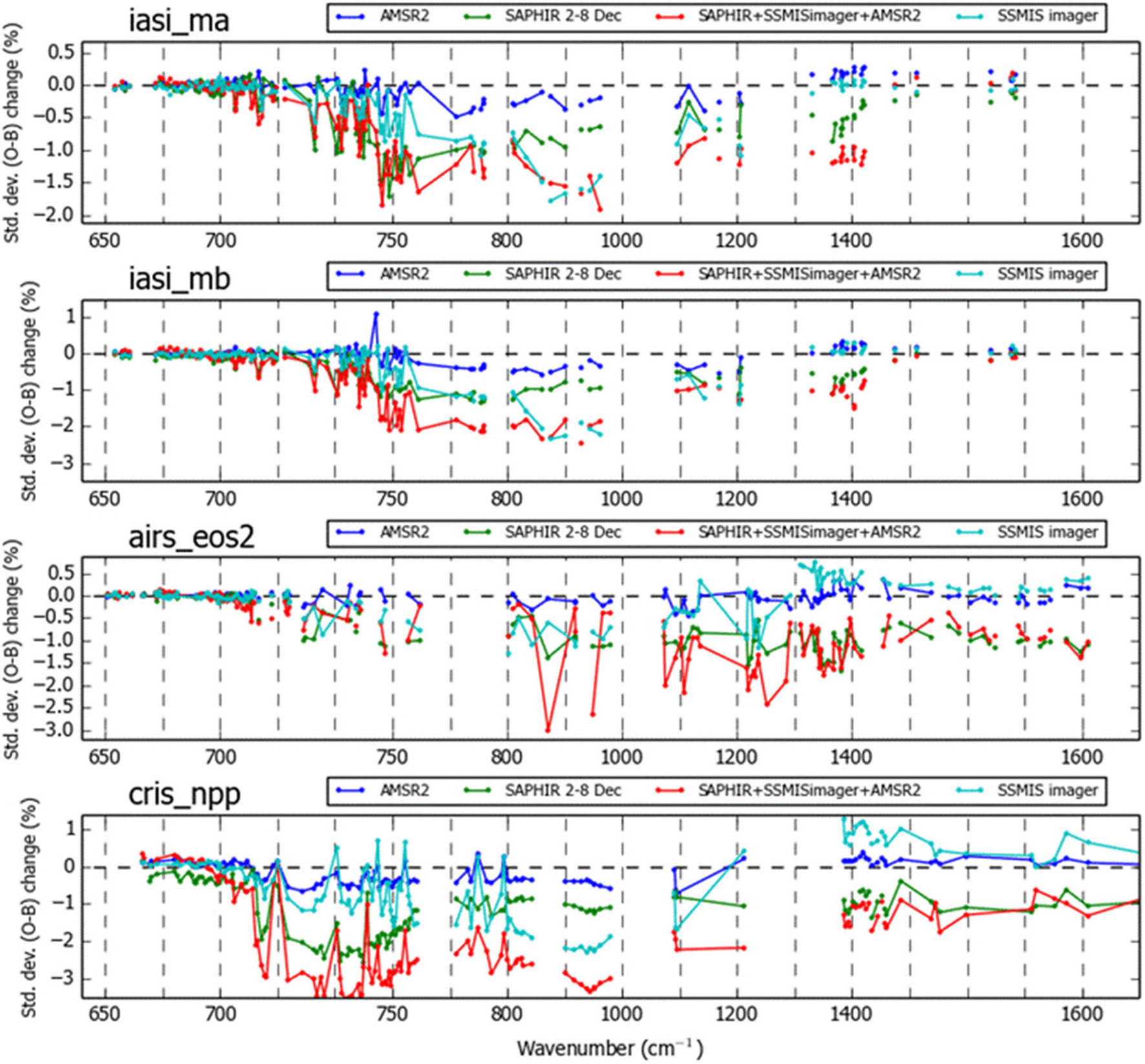 Figure 3. The effect of including Advanced Microwave Scanning Radiometer (AMSR2), Special Sensor Microwave Imager/Sounder (SSMI/S), and SAPHIR imager channels, as well as a combination of all three, on background fits to hyperspectral IR sounder observations. Each panel shows the change in the standard deviation of the first guess departure. Results are shown (from top to bottom) for the hyperspectral IR sounder channels on the IASI on MetOp-A (iasi_ma), IASI on MetOp-B (iasi_mb), Advanced IR Sounder on Aqua (airs_eos2), and Cross-track IR Sounder on Suomi-National Polar-orbiting Partnership (cris_npp).

In summary, we have studied the effect of assimilating new SAPHIR microwave humidity observations into the existing UM 4D-Var assimilation system (which is used for numerical weather predictions). Our results indicate that we can successfully assimilate the data from all six SAPHIR channels and that the assimilation positively affects the assimilation of observations from other satellite instruments (in both the IR and microwave regions). The SAPHIR radiance assimilation leads to a reduction in standard deviations of hyperspectral radiances and to an increase in the number of assimilated observations. Furthermore, the assimilation of SAPHIR data, combined with information from microwave images (e.g., SSMI/S and AMSR-2) provides a greater impact than from the individual assimilations. In addition to improving the short-range fits to independent humidity-sensitive observations, the assimilation of SAPHIR data significantly improves the short-range fits to the tropospheric temperature sounding and window channels of advanced IR instruments (i.e., IASI, AIRS, and CrIS) and the influence of the microwave imager radiances. In our future work, we propose to further investigate the benefits of the SAPHIR data. To that end, we will conduct a series of single-observation experiments that will help elucidate the complementarity of microwave imager and SAPHIR datasets.

Indira Rani acknowledges the National Monsoon Mission of the Ministry of Earth Sciences, India, for funding her visit to the Met Office, UK, to conduct this work. The authors are also grateful to the head of the National Centre for Medium Range Weather Forecasting for his consistent encouragement.

Indira Rani obtained her PhD in physics from the Space Physics Laboratory of the Indian Space Research Organization and then started working as a scientist at the NCMRWF. She works mainly on the assimilation of satellite radiances in numerical weather prediction models, with a special emphasis on radiances from Indian satellites.