The initial discovery of an accelerated universe in the late 1990s1,2 spurred scientific efforts to understand the underlying mechanism of this new phenomenon. It is now well established that the so-called dark energy, which drives the acceleration, accounts for about 70% of the energy density of our universe. But we have yet to uncover the nature of dark energy, nor do we know how it has competed with gravity over time to shape the structure of our universe.

In an attempt to answer these questions, the Dark Energy Spectroscopic Instrument3, 4 (DESI) will conduct a large redshift survey and compile a 3D map of the universe reaching to redshift 3.5 (23 billion light years) over more than a third of the sky. By measuring the light spectra of more than 35 million galaxies and quasars, DESI will be able to precisely measure the expansion history of the universe. DESI will also use the growth of cosmic structure to study the properties of gravity, neutrinos, and the inflationary epoch of the early universe.

The order-of-magnitude advance over previous redshift surveys5 will be achieved using 5000 robotically controlled fiber positioners feeding a collection of spectrographs covering the wavelength range from 360 to 980nm. During each observation, light from 5000 galaxies will be received by individual 107μm-diameter optical fibers. The closely packed robots will position the fibers so that each captures the spectrum of a single galaxy or quasar that we will then analyze using spectrographs. The robots are designed to position the fibers precisely and quickly, allowing rapid reconfiguration of the entire field for each observation. This is critical in order to achieve our goal of completing the survey within five years.

In test measurements, fiber positioners consistently locate their fiber on target with an RMS accuracy better than 5μm. To verify positioning, the fibers are back-illuminated after each move, and their actual positions are measured by an on-axis CCD camera located in the central hole of the primary mirror.

From the fiber plane image taken after the robots complete positioning, we calculate the offset of the actual position of the fiber from its desired position. These offsets are then fed to the computer controlling the fiber positioners to enable correction. We achieve the final accuracy iteratively. Typically, the first (blind) move positions fibers within 50μm of the target position. Two subsequent moves are sufficient to achieve micron precision.

The positioners have eccentric axis kinematics and are sized for a 10.4mm center-to-center pitch (see Figure 1). Actuation is achieved by two 4mm-diameter DC brushless gear motors (manufactured by Namiki Precision Jewel Co., Japan). The control of the motors is handled by a small electronics driver board attached to the rear (see Figure 2). 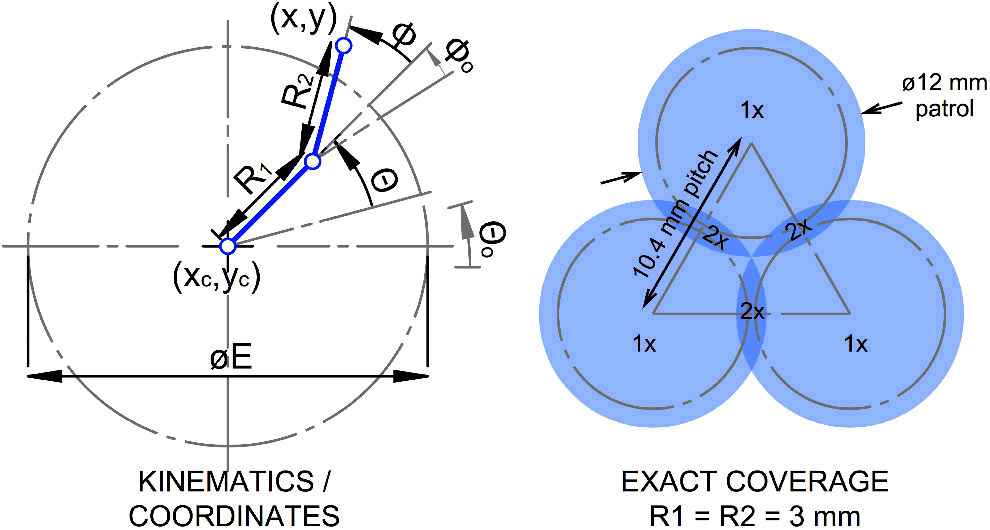 Figure 1. Left: Eccentric axis (Θ–Φ) kinematics. Whenever the Φ arm (R2) is retracted within the dashed circle E, the positioner is guaranteed free rotation about Θ without obstruction from its neighbors. Right: The patrol region (the area within which every point can be reached by the robot) coverage extends beyond the pitch. This assures complete coverage but requires implementation of collision avoidance algorithms in the move control software. R1, R2: Kinematic lengths of the Θ and Φ arms. xc, yc: Center of robot. x, y: Position of fiber. Θo, Φo: Home positions. 1×, 2×: Coverage by a single positioner and two positioners, respectively. 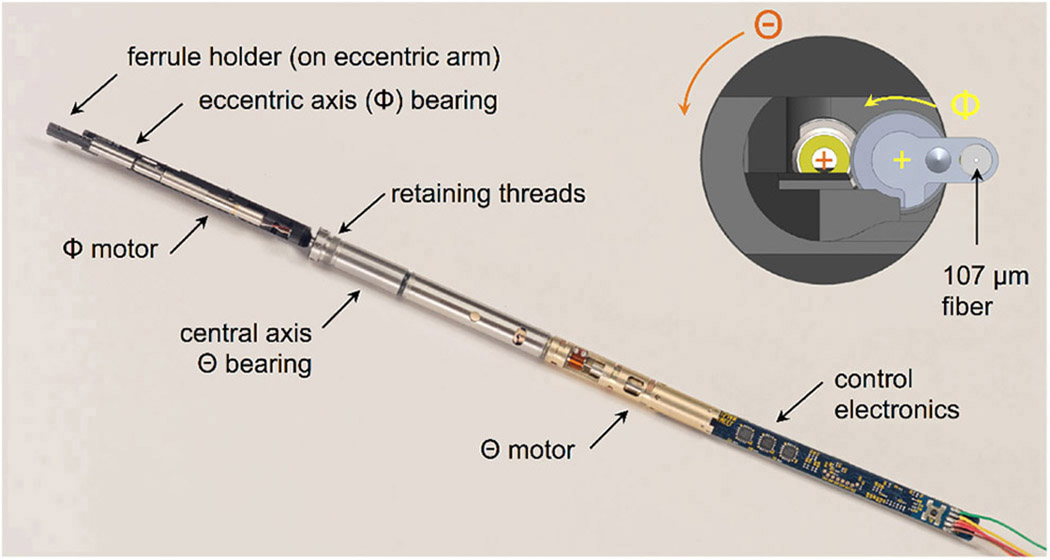 This board hosts a Cortex microcontroller running custom firmware that provides CAN (controller area network) communication, sends pulse-width-modulated signals to digital switches for motor control, and provides telemetry functionality. Figure 3 shows a block diagram of the control electronics. The electronics board is connectorless. The firmware contains an integral boot loader so that after initial JTAG (an IEEE testing and interface standard) programming, subsequent reprogramming can be performed remotely via the CAN bus command lines. This feature allows full access to the microcontroller while minimizing the wire connection count.

Electrical connection to each positioner is by a single five-wire assembly that connects to an interface board. In addition to power and CAN communication, each positioner receives a synchronization signal to facilitate easy coordination of the motion of multiple positioners. 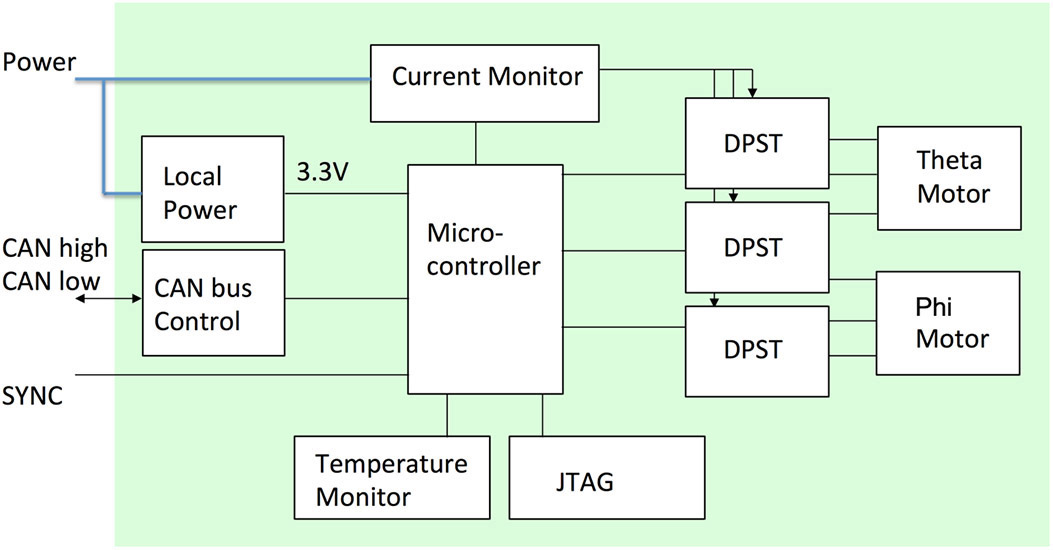 Each positioner is uniquely addressed by an ID number, and can be physically placed anywhere on the CAN bus. Groups of positioners are connected in parallel, and in any order, to simple two-line power and signal rails. Power to the electronics is shut off when the positioner is not operating to reduce the heat load on the focal plane.

Extensive tests have shown that the positioners are fast (180°/s), accurate, and robust (tested to 400,000 reconfigurations with no degradation in performance). A total of 20 machined parts and 10 fasteners go into the assembly of a positioner. Most of the research and development was performed at Lawrence Berkeley National Laboratory, with production of 5000 positioners now under way at the University of Michigan. The assembly is done in stages, each positioner undergoing quality control and testing.

After six generations of prototypes, the DESI fiber positioners are now at a mature stage and ready for mass production. Our tests show that they perform well and fulfill all specifications. A first on-sky test will be performed in September 2016 with a small-scale instrument (ProtoDESI), which tests various elements of DESI. At the same time, the first DESI subassembly will be populated with 500 positioners and tested. By fall of 2018, the remaining positioners will have been produced, tested, and installed before shipment to Kitt Peak National Observatory. First light for DESI is expected in the winter of 2018/19, followed by a five-year survey in which, night after night, the robots will reposition, enabling the instrument to collect an unprecedentedly rich redshift sample for the study of dark energy.

This research is supported by the Director, Office of Science, Office of High Energy Physics of the US Department of Energy (DOE) under contract DE-AC02-05CH1123, and by the National Energy Research Scientific Computing Center, a DOE Office of Science user facility under the same contract. Additional support for DESI is provided by the US National Science Foundation, Division of Astronomical Sciences, under contract AST-0950945 to the National Optical Astronomy Observatory; the Science and Technologies Facilities Council of the United Kingdom; the Gordon and Betty Moore Foundation; the Heising-Simons Foundation; the National Council of Science and Technology of Mexico; and by the DESI Member Institutions. The authors are honored to be permitted to conduct astronomical research on Iolkam Du'ag (Kitt Peak), a mountain with particular significance to the Tohono O'odham Nation.

Michael Schubnell is a research scientist. His research focuses on experimental cosmology and astrophysics and the search for dark matter.