Breast cancer is the most common form of malignant tumor in females. Its progression to metastasis—the spread of malignant cells from the tumor site into the bloodstream—is the primary contributor to breast cancer mortality. During the metastatic stage, medical imaging is essential to track the progress of the disease. However, when the tumor is less aggressive, exposing the patient to potentially dangerous ionizing radiation might outweigh the risks associated with the disease itself.

Molecular methods to predict and classify the metastatic potential of breast cancers are constantly under investigation.1 There is also a general consensus that direct measurement of tissue stiffness could be used to assign a score to the aggressiveness of a tumor, and thereby may contribute to disease prognosis. To investigate the possibility of discriminating breast cells of known metastatic potential based on how soft they are, we applied two biophysical techniques to measure their stiffness: atomic force microscopy (AFM) and optical tweezers microscopy (OTM).2

AFM consists of a cantilever mounted on a piezoelectric device that performs a raster scan of the sample surface. The device builds a map of the sample topography, which is based on the interaction of the surface with the nanometer-sized tip at the end of the cantilever.3 The instrument is also able to measure accurately the force applied to the sample at every point on the map. Similarly, OTM can measure the interaction between the sample and a probe (an optically trapped microbead in our work).4 Because microbeads are two to three orders of magnitude larger than AFM tips, high-resolution mapping of samples using OTM is not feasible. However, the optical (rather than mechanical) nature of the manipulation makes the probe more ‘gentle,’ and OTM is thus capable of measuring forces very accurately.5

Both AFM and OTM can be applied to estimate the force necessary to indent a surface, such as a cell membrane. By examining the relationship between the force and the extent of the indentation, it is possible to extrapolate elasticity data on individual cells within an in vitro culture. We applied AFM and OTM on the same cell cultures and obtained a comprehensive and systematic understanding of the mechanical properties of cell types of known aggressiveness.

We tested our approach on three breast cell lines. The first, MDA-MB-231, is a very aggressive cancer cell line with high metastatic potential. The second, MCF-7, is a cancer cell line with low metastatic potential, and the third cell line, HBL-100, is a non-malignant line that we used as a control. We measured and ranked the stiffness of a significant number of individual cells of the three types, with the expectation that the average stiffness of MDA-MB-231 would be much lower than for the other two cell lines.

Rather than limiting the investigation to a single measurement per cell, we first used AFM to map the distribution of the elasticity (Young's modulus) across the cell's membrane. We found that the region just above the nucleus presents the largest modulus (see Figure 1) and the highest degree of diversity between cell lines. We then placed the OTM probe exactly on this area (see Figure 1, inset) and performed extremely accurate measurements of the elasticity in a low-force regime. In contrast with the AFM technique, this approach was unlikely to perturb the cell itself or be affected by contributions from viscous forces. 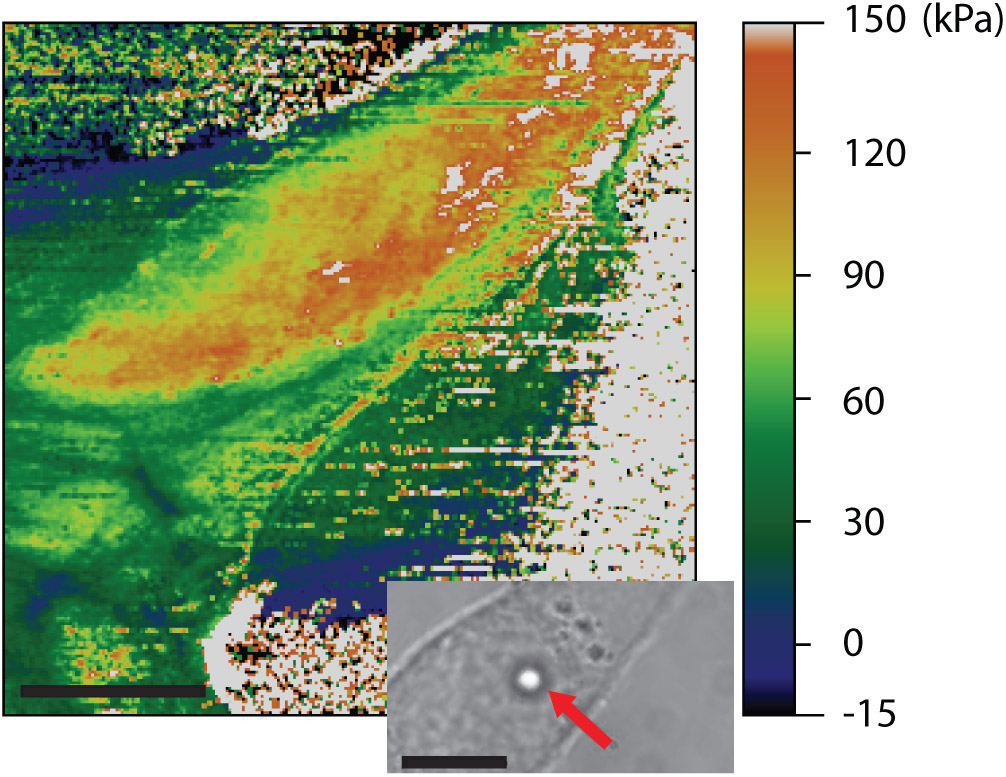 We obtained average elasticity values from measurements of about 20–30 cells per type, and these values confirmed that highly aggressive MDA-MB-231 cells are significantly softer than the other two cell lines (see Table 1). We were able to make this assessment through the use of either AFM or OTM when we measured the area of the membrane just above the nucleus.

Table 1.Elasticity values measured by AFM and OTM indentation on different cell lines. The values represent the mean Young's modulus ± the standard deviation over a number (N) of cells (in brackets). The star (*) identifies significant difference compared to the other cell lines (P < 0.05).

In summary, our study suggests the possibility of discriminating metastatic potential using mechanical rather than molecular markers. Our investigation in a laboratory context is highly informative for the development of tools that might in future be used in a clinically relevant environment. Our future work will focus on expanding this knowledge to other cell lines and possibly to patient biopsies.

Enrico Ferrari is a senior lecturer. Previously he held a postdoctoral fellowship at the Medical Research Council Laboratory of Molecular Biology, Cambridge, UK, and was a PhD student at the University of Trieste, Italy.

Muhammad Sulaiman Yousafzai is a postdoctoral researcher. Previously he was a PhD student at the University of Trieste, Italy.

Dan Cojoc is a senior scientist. Previously he was vice-president of the SPIE Romanian Chapter, and he supervised the first SPIE Student Chapter in Romania.