A significantly more accurate model, which has been verified with rainfall measurements from a typhoon in Taiwan, is obtained by considering a topographic effect.
13 June 2016
Gin-Rong Liu, Kwan-Ru Chen, Tsung-Hua Kuo, Chian-Yi Liu, Tang-Huang Lin and Liang-De Chen

In many geographic regions like Taiwan, people suffer from the disastrous effects of tropical cyclones year after year. For instance, the heavy rainfall from these events often triggers mudslides and other associated problems. Furthermore, there appears to be an increasing trend for stronger tropical cyclones.1 Indeed, typhoon Morakot (in 2009) brought record-breaking rainfall floods, the likes of which had not been witnessed in Taiwan for more than 50 years. This typhoon caused the death of more than 680 people (about 500 were killed in a single mudslide). There is thus a great need to develop a method that can be used to forecast the potential of tropical rainfall in both a quick and accurate manner (especially over mountainous regions as these are associated with the highest flood and mudslide risks). Assessing a tropical cyclone's rainfall potential, however, can be very difficult because the interaction between the cyclone and inland rugged terrains is very complex. This is unfortunately the case for Taiwan because more than two-thirds of its area is covered by mountainous terrain (up to 3000m in altitude).

In our work,5 we have therefore developed an improved tropical rainfall potential (I-TRaP) model6 for use over mountainous regions. In our technique we make better assumptions than with the original TRaP technique, and we can thus obtain more accurate tropical cyclone rainfall distributions. The additional vital information we consider in our I-TRaP model includes the tropical cyclone rainfall band rotation, topographic effects, and the systematic rainfall-retrieved bias.

In our development of the I-TRaP technique, we use microwave data from the Special Sensor Microwave Imager (SSM/I) and Special Sensor Microwave Imager Sounder (SSMIS) satellite passive microwave radiometers. We use these instruments to retrieve rainfall rates because of their ability to penetrate through clouds. The data from SSM/I and SSMIS is therefore superior, in terms of accuracy and their all-day operational ability, than IR images. Unlike with the original TRaP technique, in which the rainfall band is assumed to have a shift motion, for I-TRaP we use consecutive (on an hourly basis) geostationary weather satellite IR images to estimate the angular rotation speeds for tropical cyclone spiral rainfall bands. We then use this information in the rainfall summing step of the methodology.

The single most important improvement we have made with I-TRaP is the consideration of the topographic effect. Essentially, it is very hard to accurately assess the effect of topography on tropical cyclone rainfall. In response, we have therefore used historical rainfall data, measured at a number of field stations, to study this effect. Although, in a technical sense, the original TRaP-derived rainfall potential calculations did not involve a terrain effect, the station-measured rainfall patterns could be treated as a result that was actually affected by the topographic effect. With TRaP, it was therefore possible to use the long-term averages of these two rainfall pattern data sets to establish a correction relationship and account for the terrain effect. Moreover, it is very reasonable to assume that—for a typhoon affecting a region with a similar geometrical aspect and distance to that of Taiwan's Central Mountain Range—similar interactions between the mountains and rainfall patterns should arise. In other words, typhoons that pass over similar locations around Taiwan are treated as producing a similar topographic effect on the rainfall distribution. As a consequence, we can use the rainfall pattern from historical typhoon records as a topographic effect indicator. In addition, the systematic error associated with our rainfall estimations can also be reduced.

In our work, we have used actual historical rainfall cases to delineate the topographic effect caused by the Central Mountain Range. Although our approximation is very simple, we have demonstrated its obvious effectiveness. Our results show that with I-TRaP, we can obtain more accurate rainfall patterns than with the original TRaP methodology (see Figure 1). In addition to the improved rainfall distributions, we can obtain lower absolute errors in our rain rate predictions and in most cases we obtain more accurate rainfall peak locations. We have also conducted a sensitivity test that shows I-TRaP is more robust in terms of cyclone track errors. 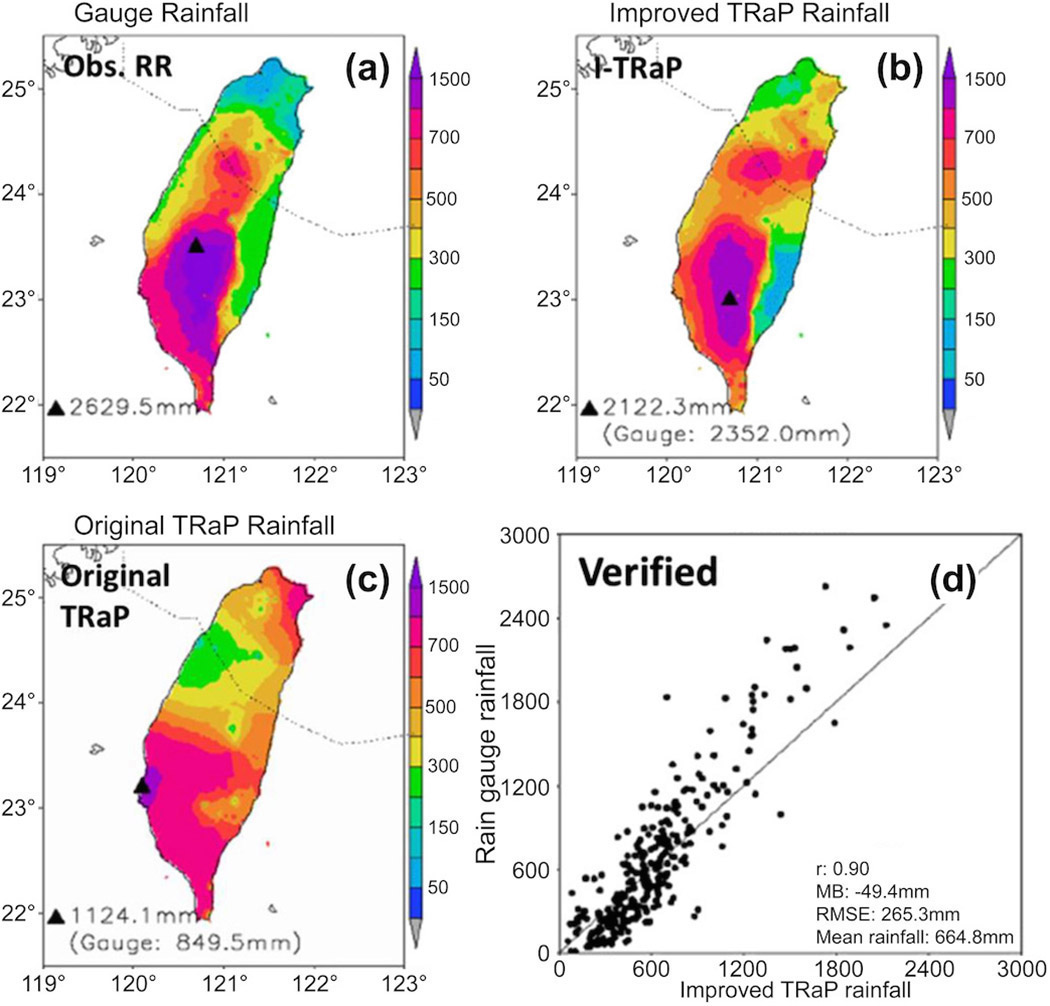 Figure 1. Comparison of (a) the observed rainfall rate (Obs. RR) over Taiwan's Central Mountain Range during the 2009 Morakot typhoon and the rainfall potential obtained from the (b) improved tropical rainfall potential (I-TRaP) model and (c) original TRaP methodology. These results (in mm) are for the period between 00:00UTC (coordinated universal time) on 7 August 2009 and 00:00UTC on 9 August 2009. Black triangles denote the peak rainfall locations. (d) The relationship between the gauge-measured rainfall and the I-TRaP results. r: Correlation coefficient. MB: Mean bias. RMSE: Root mean square error.

In summary, we have developed a new tropical rainfall potential forecast methodology that is based on the previously proposed TRaP technique. By using a better set of assumptions (e.g., rainfall band rotation and the topographic effect), we can achieve improved rainfall distribution predictions, with lower errors. We have verified our technique for a tropical cyclone case (Morakot in 2009) that affected the Central Mountain Range of Taiwan. In our ongoing work we are continuing to collect additional historical typhoon information so that we can establish an even more comprehensive statistical database. Another important aspect of our future work is to focus on the coupling effect of the typhoon outer circulation and the seasonal/monsoon winds.

Gin-Rong Liu is a professor and the vice president of National Central University, Taiwan. His main research interests are focused on satellite remote sensing and environmental sustainability. He is also a fellow of the Meteorological Society of Taiwan.