High-resolution transmission electron microscopy is combined with a novel preparation method, based on superhydrophobic sample control, to achieve a spatial resolution of down to 1.5Å.
03 August 2016
Monica Marini, Andrea Falqui and Enzo Di Fabrizio

Although the structure of DNA was first determined in 1953,1 there have since been several unsuccessful attempts to obtain a direct image of the structure. With such direct images, quantitative evaluation of the molecule's characteristic dimensions would be possible. Direct images of DNA, however, are difficult to obtain for two main reasons. First, the elements that form the molecule intrinsically have very low contrast. In addition, preparing the DNA sample for imaging is hard to achieve while also preserving its pristine shape and size.

In previous work, macromolecules (such as DNA) have been widely investigated through the use of x-ray diffraction (XRD)1–3 and nuclear magnetic resonance (NMR)4 techniques. Although these methods are well understood and used extensively, they have some severe limitations. For example, to make successful XRD analyses, crystals or ordered fibers are required,5 as well as large amounts of pure samples. Moreover, the information that is acquired is strongly related to the molecular state of the crystals or fibers and does not provide a direct image.

To overcome such limitations, in our recent work6,7 we have developed a new preparation method to enable transmission electron microscopy (TEM) of nuclei acids. In our approach—which we conduct at room temperature and without any sample staining procedure—we suspend a single double-strand DNA molecule on a superhydrophobic surface and then directly image it with high-resolution TEM (HRTEM). We can thus obtain final TEM images of the DNA that do not contain substrate contributions6 and directly observe a single DNA double helix.7

In the first step of our preparation method, we dilute lambda DNA (i.e., DNA from Enterobacteria phage λ) in a physiologically compatible saline buffer. This solution is then exposed to a temperature ramp to open the undesired secondary structures and thus obtain well-separated single nucleic acid molecules. We subsequently deposit a drop of this freshly prepared DNA solution onto the superhydrophobic surface, which consists of silicon micropillars arranged in a circular pattern and with holes between the pillars. Evaporation reduces the droplet volume, and therefore its contact area on the patterned surface is also reduced. During the dehydration, the suspended droplet leaves the external pillars and is pinned onto the internal ones. Some of the molecules floating in the solution are thus pulled and are forced to follow the drop movement. As a result of this complex evaporation and drop-receding process, we achieve the suspension of DNA molecules between two or more pillars.

We used scanning electron microscopy (SEM) to make a preliminary investigation of our samples. From the image of a salt residue—see Figure 1(A)—we observe that the DNA molecules are suspended between micropillars and over the holes between the pillars. SEM images of the micropillars and holes are shown at higher magnification in Figure 1(B) and (C). We then imaged the samples (see Figure 2) with the use of a spherical-abberation-corrected HRTEM that we operated at an electron acceleration voltage of 80kV and with a magnification of about 1 million. With these experimental conditions, we achieved a spatial resolution of down to about 1.5Å.

Figure 1. Scanning electron microscope images of suspended DNA molecules. The samples were obtained after complete dehydration of a droplet that contained a physiologically compatible saline solution and nucleic acids. (A) Salt residue suspended between micropillars and over holes in the pillars. (B) and (C) Higher magnification images of the micropillars and holes. 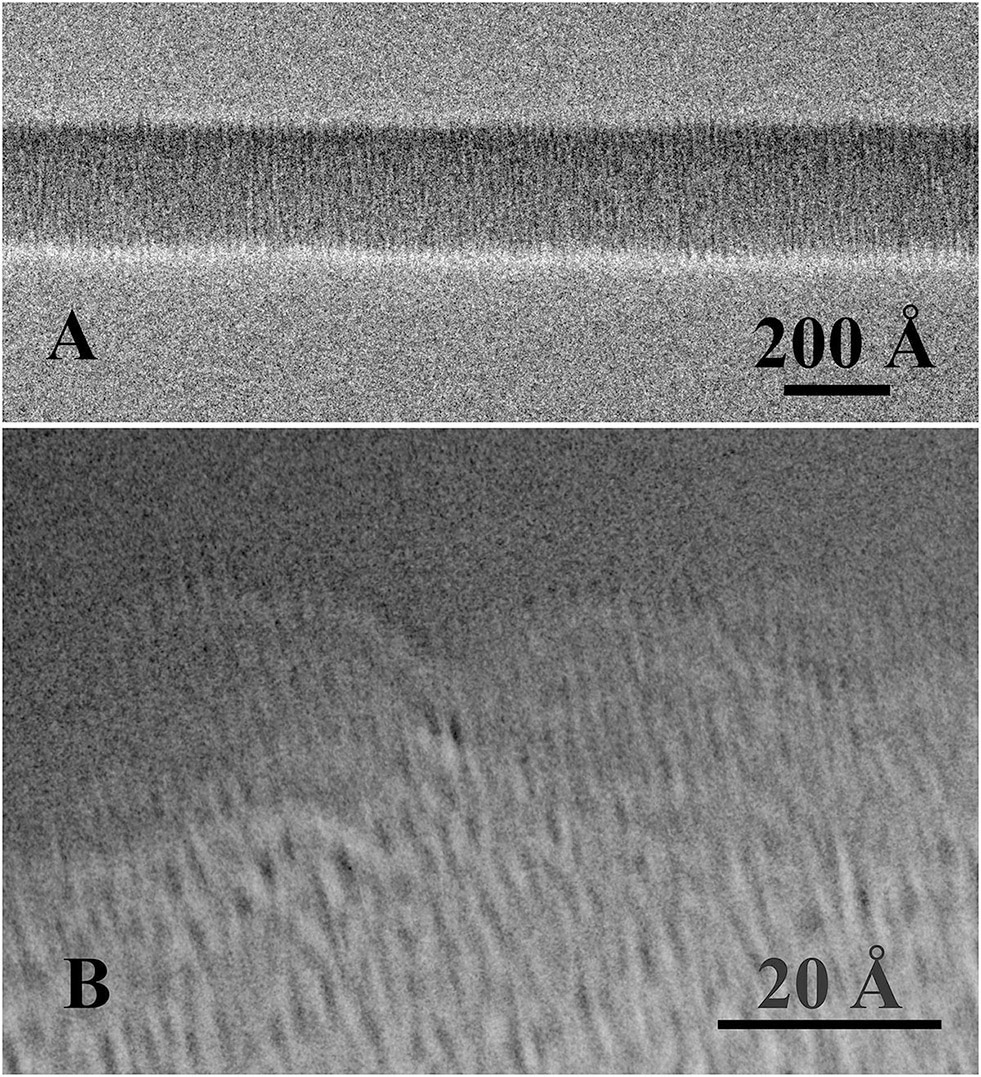 Figure 2. HRTEM phase-contrast images of (A) an A-DNA bundle, in which the DNA fringes are clearly visible, and (B) a single A-DNA helix bound to a 100Å DNA bundle. These images were obtained by stacking two images that were acquired with 50 electrons/sÅ2at 80keV (inverted colors).

An HRTEM image of a DNA bundle (about 25nm in diameter) is shown in Figure 2(A), in which fringes relating to the DNA structure can be seen. In addition, for the image shown in Figure 2(B), we achieved a sub-period resolution and have thus revealed details of almost two periods of a single DNA (A-form) helix's inner structure. From such images, we characterized and measured a number of the molecule's features, i.e., diameter, major and minor grooves, tilt of the base pairs relative to the axis, pitch of the helix, and rise per base pair. We found that our quantitative measurements were in good agreement with corresponding values that we obtained from XRD.

The innovative nature of our work means that it is possible to directly observe features that have only previously been studied through simulations, e.g., the backbone and base length of the DNA structure (see Table 1). Furthermore, we can easily measure molecules at concentrations of down to the attomolar (i.e., 10−18 mole/l) range with our method,9–11 and we can thus overcome previous sample volume limits for such measurements. In addition, the buffer solutions that we use for the material suspension are fully compatible with—in some cases critical—physiological conditions. We can thus expand the range of biomolecules that can be investigated.

Table 1. Lengths of various A-DNA (i.e., A-form helix) structures, measured with the use of high-resolution transmission electron microscope (HRTEM) images (see Figure 2), as well as from x-ray and simulation data. The statistical error for the measured lengths is estimated to be 1.5Å. The results from both data sets are comparable. BP: Base pair.

In summary, we have developed a new preparation method to enable direct TEM imaging of macromolecules such as DNA. We have also used these images to measure the structural characteristics of DNA, and we find that our results are consistent with previous simulation data. In our future work, we need to improve the contrast of the images to minimize damage caused by the sample beam. Our preliminary results for DNA molecules have illustrated the versatility of our approach, as these are the fundamental constituents of all biological matter. Our technique can thus be used as a ‘workbench’ to study the interaction of DNA with other substances (e.g., intercalants and chemotherapeutics) and to support structural studies of other biomolecules (e.g., repair proteins and histones).

Monica Marini holds a postdoctoral position in the Physical Science and Engineering Division. Her research interests are focused on the single imaging and characterization of free-standing biological molecules (such as nucleic acids) and their interaction with other materials (e.g., histones, repair proteins, intercalants, and chemotherapeutic agents).

Andrea Falqui is an associate professor in the Biological Science and Engineering Division. His area of expertise is imaging (with advanced electron microscopy) of nano- and biomaterials, and of biomaterials interacting with nanostructures. He is the coauthor of more than 150 scientific papers.

Enzo di Fabrizio is a professor in the Physical Science and Engineering Division. His main interests involve the study of materials and macromolecules at the nanoscale, as well as their structure and function (through novel spectroscopy approaches mediated by nanostructures).