Silicon quantum dots that are co-doped with boron and phosphorus exhibit bright and stable luminescence in the near-IR wavelength range and are environmentally friendly.
06 July 2016
Minoru Fujii, Hiroshi Sugimoto and Shinya Kano

The rapidly growing research field of biophotonics involves the use of light-activated processes for several applications, such as bioimaging, biosensing, medical diagnostics, and light-activated therapy. Colloidal silicon (Si) quantum dots (QDs) are a promising candidate to use as probes for these biophotonics purposes because of their high biocompatibility and biodegradability. In the conventional synthesis approach, a stable colloidal solution is produced by properly functionalizing the surface of the Si-QDs with organic ligands.1, 2 The luminescence property of functionalized Si-QDs, however, is often too sensitive to the environment and chemical processes. The high luminescence sensitivity of Si-QDs arises because exciton wavefunctions extend to the surface molecules. Furthermore, the dispersion of luminescent QDs in aqueous media—which is essential for many biophotonics applications—is very difficult. Although new organic functionalization processes have been developed to overcome these problems,3 a more fundamental solution still needs to be explored so that versatile Si-QDs can be achieved in a variety of biophotonics situations.

In our recent work, we have developed a new type of Si-QDs that do not include organic ligands and that are dispersible in alcohol and water (see Figure 1).4–8 We heavily dope our all-inorganic Si-QDs with boron (B) and phosphorus (P) and thus form a shell that has a high concentration of these elements. This shell induces a negative potential on the surface and makes the QDs hydrophilic.9 The shell is also chemically inert—similar to BP10 and related alloy nanocrystals11—and has a higher resistance to hydrofluoric acid solution than undoped Si-QDs.6 In addition, our co-doped colloidal Si-QDs have several Si–hydrogen and Si–oxygen bonds on their surfaces. By utilizing well-known reactions, we can therefore functionalize the surfaces with organic molecules. 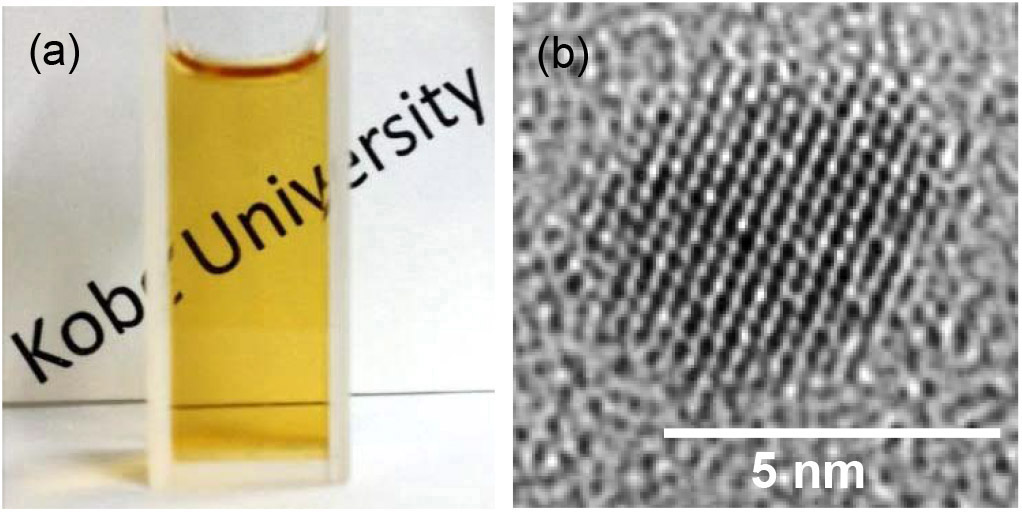 Figure 1. (a) Photograph of a colloidal solution of boron- and phosphorus-co-doped silicon quantum dots (Si-QDs) in methanol. (b) High-resolution transmission electron microscope (TEM) image of a co-doped Si-QD. The lattice fringe corresponds to the {111}plane of crystalline Si.

Our co-doped Si-QDs exhibit size-controllable photoluminescence over an extremely wide energy range (0.9–1.8eV), as shown in Figure 2.12 We can control the luminescence energy of the Si-QDs both above (a typical quantum size effect) and below the bulk Si band gap (1.12eV at room temperature). We find that the luminescence energy of our Si-QDs is always several hundred meV lower than undoped Si-QDs with comparable sizes, which suggests that the luminescence arises from the donor–acceptor transitions.13 In our work we have also shown that degradation of the luminescence is almost undetectable when the Si-QDs are kept in methanol for more than a year. Furthermore, although our co-doped Si-QDs become slowly oxidized in water, the luminescence is still much more stable than for water-dispersible II-VI quantum dots.14 We believe that the highly stable luminescence characteristics of our Si-QDs originate from the confinements of photoexcited excitons in the core of the QDs and that they have little interaction with the surrounding environment. Indeed, we observe very similar luminescence spectra from the Si-QDs even when they are in different environments, including methanol and water,14 hydrofluoric acid solution,6 air,15 and human cells. By spin coating the colloidal solution, we can also produce films with very flat surfaces.16 Such films can be used as a probe for monitoring the local photonic-mode density of plasmonic substrates.17 To our surprise, we found that the luminescence quantum yield of these completely dried films in air is almost identical to that of the colloidal solution. As the luminescence of our co-doped Si-QDs is very insensitive to chemical treatments, we can attach different kinds of biosubstances to the surfaces, without degrading the luminescence properties. This is a unique feature of our QDs and cannot be achieved with ligand-stabilized Si-QDs. 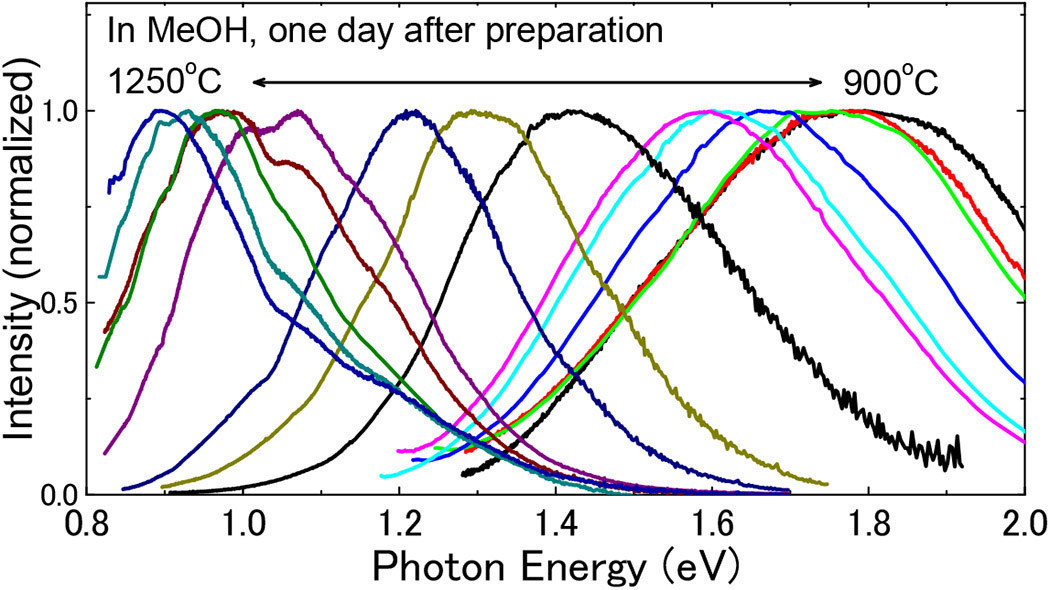 Figure 2. Photoluminescence spectra of boron- and phosphorus-co-doped Si-QDs that were grown at different temperatures (900–1250°C) in methanol (MeOH). The diameter of these Si-QDs ranges from 1 to 9nm.12

The luminescence insensitivity of our co-doped Si-QDs to the environment and to chemical processes means that we can use them to produce a variety of nanocomposites. For example, by simply mixing the solution of co-doped Si-QDs with a solution of positively charged gold (Au) nanoparticles and nanorods, we can form nanocomposites.18, 19 In these nanocomposites the effective excitation cross section18 and the quantum yield19 of the Si-QDs are enhanced because of the coupling with the localized surface plasmon resonances of the Au nanoparticles and nanorods. We can also produce nanocomposites via chemical bonding and by using DNA hybridization. In these processes we can control the distance between the Si-QDs and the metal nanoparticles (a crucial parameter for maximizing the enhancement of the optical responses) with high accuracy. Furthermore, we can successfully disperse the co-doped Si-QDs in polymers. Indeed, we observe bright luminescence from cellulose nanofibers in which Si-QDs and Au nanoparticles have been simultaneously doped.20

The surface of freshly produced co-doped Si-QDs is mainly terminated by hydrogen (H) atoms,21 and the Si–H bonds are very chemically active. By using the freshly produced H-terminated co-doped Si-QDs, we have explored a new self-limiting solution-synthesis method for Si-QD/metal nanocomposites.21 In this method, we simply add melt salts to a solution of Si-QDs. In this mixed solution, the co-doped Si-QDs act as a reducing agent for the metal salts and also as a protecting layer to stop metal nanoparticle growth. With this method, we have demonstrated the formation of Si-QD/metal (i.e., gold, silver, or platinum) nanocomposites with different sizes and shapes (see Figure 3).21 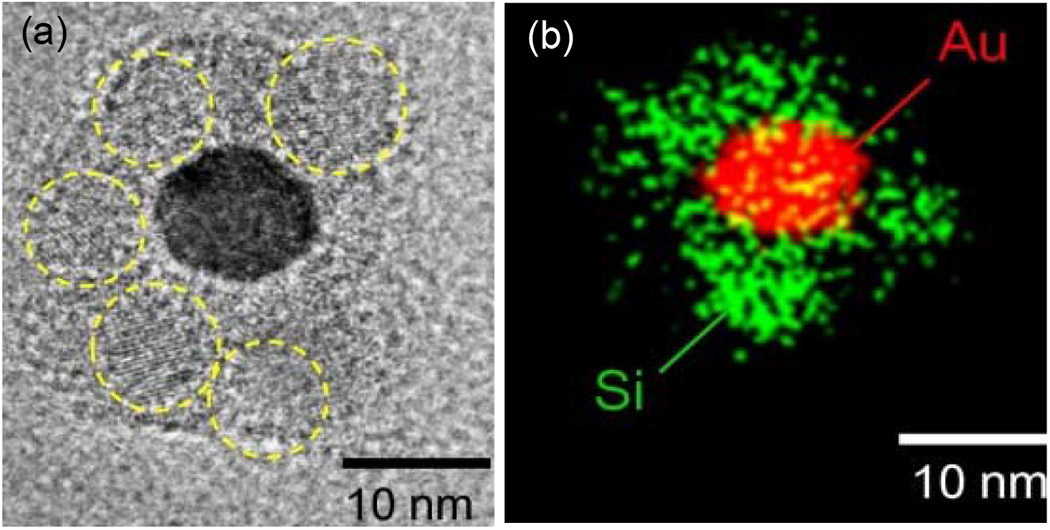 Figure 3. (a) High-resolution TEM image of a Si-QD/gold (Au) nanoparticle composite. A Au nanoparticle in the center is surrounded by Si-QDs (marked by yellow circles). (b) Scanning TEM energy-dispersive x-ray spectroscopy mapping of the hybrid nanoparticle.21

In summary, we have developed a new approach for the formation of all-inorganic Si-QDs that are co-doped with boron and phosphorus. Our new functional nanomaterials have many superior properties compared with conventional Si-QDs that include organic ligands. Many of the new properties arise from the heavily B- and P-doped hydrophilic shell, which protects the Si-QD core from the environment and provides high chemical stability. The shell also confines excitons to the Si-QD core, and the luminescence is thus very insensitive to the environment and chemical processes. In addition, we are able to control the luminescence energy of the Si-QDs over a wide wavelength range. These features, combined with their biocompatibility, make our co-doped Si-QDs an attractive and environmentally friendly option for a nano-light source in biophotonics and optoelectronics applications. In the next stages of our research we will study the luminescence property of co-doped Si-QDs and the nanocomposites in cell cultivation media, the cellular uptake processes, and the cytotoxicity. We will also develop the necessary methods to implement the Si-QDs and nanocomposites in biosensing devices.

This work is partly supported by the 2014 Bilateral Joint Research Project (between Japan and the Czech Republic) of the Japan Society for the Promotion of Science (JSPS), the 2015 Japan Science and Technology agency's Visegrad Group (V4)-Japan Joint Research Project on advanced materials, and JSPS's Grants-in-Aid of Scientific Research (KAKENHI) funds (grant 16H03828).

Minoru Fujii is a professor in the Department of Electrical and Electronic Engineering. His research interests include nanostructured semiconductor and metal materials for photonic applications.