One of the outstanding questions in neuroscience is how best spontaneous brain activity can be analyzed in terms of underlying large-scale functional networks and their interactions.1 Suitable analysis could explain what is happening in the brain during resting state, and whether or not we can learn anything about conventional task activity (such as the processing of visual or auditory stimuli) from its study. Answering these questions would improve our fundamental understanding of brain function, and could help in the development of new biomarkers for conditions such as Alzheimer's disease and autism spectrum disorder (ASD).

Functional magnetic resonance imaging (fMRI) allows brain activity to be monitored in a non-invasive way. fMRI datasets typically cover the entire brain at millimeter resolution. For each spatial location, the blood-oxygenation-level-dependent (BOLD) signal (a slow proxy for neural activity based on neurovascular coupling) is measured. The BOLD signal is sensitive to changes in the cerebral blood flow, blood volume, and metabolic rate of oxygen. This set of physiological responses are collectively referred to as the hemodynamic response. The neuroscience community has been intrigued by the wealth of information that can be extracted from resting-state fMRI data for over ten years. This interest emerged as a result of the availability of advanced computational techniques, particularly multivariate methods, such as independent component analysis (ICA). ICA is used to find a set of statistically independent spatial maps and associated time courses from an fMRI data series.2 One of the major findings obtained using these techniques showed the independent maps to closely resemble spatial patterns that were found in studies using evoked activity (e.g., looking at a picture or listening to music). This suggests not only that resting-state activity is assembled out of the same functional repertoire as evoked activity, but also that many of these components can be identified simultaneously and without a specific task.3 Despite the meaningful spatial patterns obtained by methods such as ICA, relating these patterns to reliable time courses that can be further analyzed to understand brain dynamics remains a challenge. One promising recent idea proposes that resting fMRI data be characterized as a point process (i.e., by volumes at time points for which BOLD activity exceeds a given threshold).4, 5 We have taken this point process idea one step further by incorporating a model of the hemodynamic system.

In our work, the BOLD time series of each voxel in a resting-state fMRI dataset is deconvolved from the hemodynamic response function. This deconvolution uncovers the activity-inducing signal, which shows block-type patterns of brain activation in that voxel. The derivative of this signal produces an innovation signal, which encodes transient brain activity. A positive spike in the innovation signal indicates a transition to increased activity, and a negative spike indicates a transition to decreased activity. In Figure 1, an example fMRI time course from the posterior cingulate cortex (PCC) illustrates the recovered signals used in our process. In this example, a healthy subject was asked to rest (with closed eyes) in the MRI scanner. From this, an fMRI time series was obtained. Three brain maps are shown—see Figure 1(d)—at time points corresponding to spikes in the innovation signal. 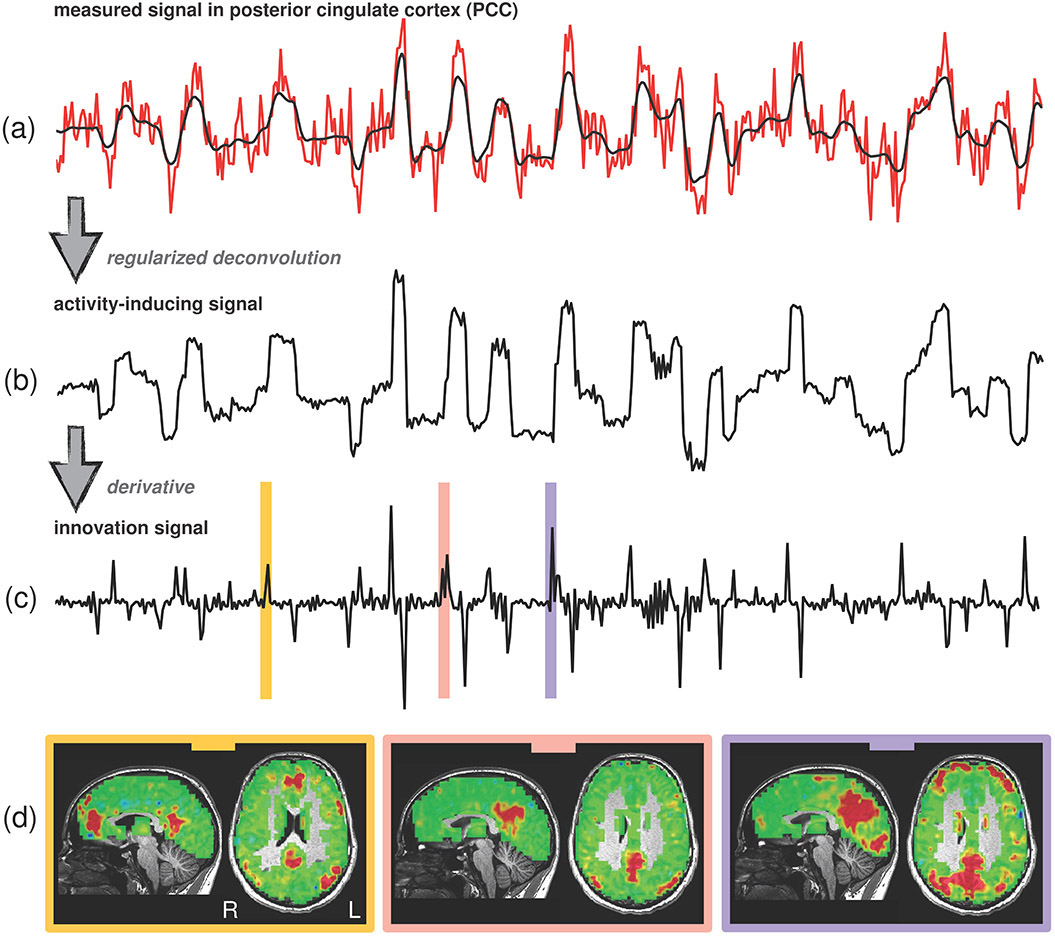 Figure 1. Functional magnetic resonance imaging results from the posterior cingulate cortext (PCC) in resting state, obtained over a duration of eight minutes. (a) Original BOLD signal (red) and the recovered activity-related signal (black). (b) Activity-inducing signal that represents the deconvolved activity-related signal. (c) Innovation signal, which is the derivative of the activity-inducing signal. (d) Three brain maps showing transients (activity) when the innovation signal of the PCC is high.

Our method relies upon a linearization of the balloon-windkessel model of the hemodynamic system.6 Given such a linear-system description, it is possible to analytically specify the linear differential operator that will invert the system. However, since the hemodynamic system itself acts like a low-pass filter, the inverse operator will act as an unstable high-pass filter (i.e., a minimal amount of noise to the signal will be amplified), rendering the resulting innovation signal useless. To solve this issue, we cast a regularization problem in which the differential operator is combined with ‘total variation’ regularization.7 The application of the combined differential operator to fMRI signals, termed ‘total activation,’ allows deconvolved BOLD signals (the activity-inducing signals) to be obtained based on the general assumption that they consist of sustained on/off periods (i.e., a piece-wise constant). This gives the innovation signal its spike formation.

We have previously shown in a proof-of-concept experiment that total activation is able to recover evoked activity, to which the method was blind.8 In the work reported here, we used the innovation signals from the rest-state fMRI data of 14 healthy volunteers to retrieve the strong transients in the data and to temporally cluster them. The innovation-driven coactivation pattern (iCAP) for each temporal cluster can be determined by averaging its spatial instances. Each iCAP therefore has a unique spatial pattern, in addition to temporal information about when the pattern occurs. Importantly, since the clusters are determined based on the innovation signals, this method avoids crosstalk of functional networks that are simultaneously active (i.e., their overlapping activity is effectively uncoupled as long as their transients happen at different moments in time). The repertoire of iCAPs is shown in Figure 2 and grouped according to the result of a hierarchical clustering, which we based on observed combinations of temporal overlaps.9 One key observation is that the default mode network does not only appear as a single iCAP, but also as different subsystems: precuneus; posterior default mode; and anterior cingulate. 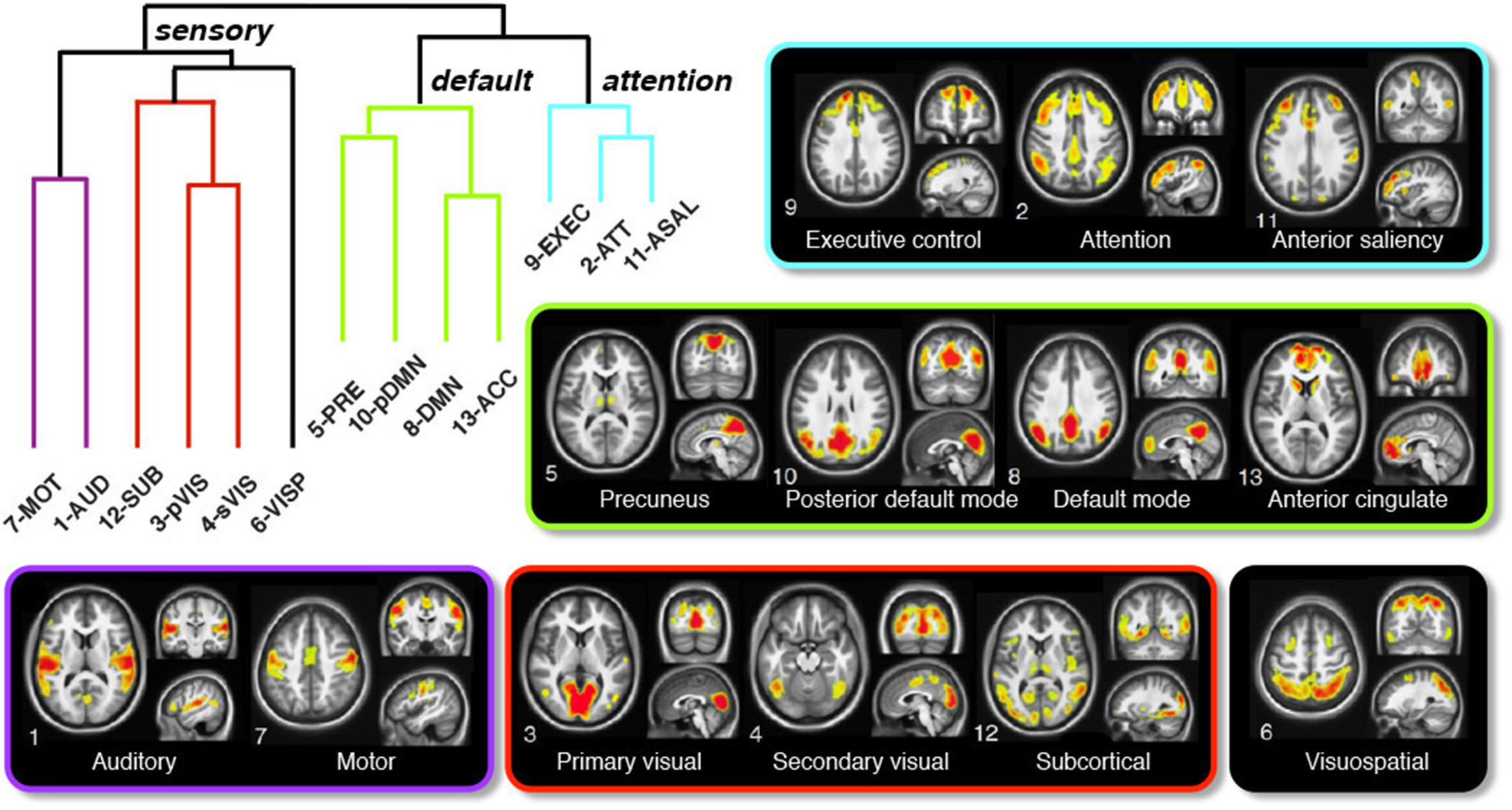 By back-projecting the spatial patterns to the activity-inducing signals, we found between three and four iCAPs to be simultaneously active at any time point. These groupings occur in combinations consistent with their behaviour profiles. Conventional fMRI analysis (i.e., correlation coefficients computed for time courses over a whole resting-state session) shows anti-correlation between the default mode network and the attention network (see Figure 2). In contrast, we found that these two networks always occur with the same innovation signal sign, suggesting that they activate or deactivate together. The apparent anti-correlation of conventional analysis is explained by interactions with opposite signs between other iCAPs that are subsystems (e.g., the posterior default mode).

In summary, our methodology opens new perspectives for disentangling brain activity that originates from multiple overlapping functional networks. We are currently applying this approach to establish sensitive biomarkers of brain dysfunction, such as in ASD. In addition, a large number of challenges remain for which synergies between neuroimaging and principled computational approaches will play an essential role (e.g., how slow hemodynamic fMRI networks relate to fast electroencephalography measurements).10

The authors acknowledge support from the Swiss National Science Foundation and the Bertarelli Foundation.

Dimitri Van De Ville is professor of bioengineering at EPFL and the Department of Radiology and Medical Informatics at the University of Geneva. He directs the Medical Image Processing Lab at Campus Biotech, and he is also affiliated with the Center for Neuroprosthetics.

Fikret Isik Karahanoğlu completed her PhD in electrical engineering at EPFL. She is curently a post-doctoral fellow.