With the increasing amount of information that travels in telecommunication systems, single-mode fiber-based infrastructures are no longer sufficient, and there is a continuous need to improve the transmission channel capacity. Among the approaches currently being explored, mode-division multiplexing is one of the most appealing. In this technique—because modes with different topological charge (ℓ) are orthogonal—an additional degree of freedom (i.e., the spatial dimension) can be added to the well-established time, wavelength, polarization, and coding schemes.1–4 Although this new dimension has already been successfully implemented in architectures that are based on digital signal processors (DSPs),1, 2 the huge amount of data still leads to an extremely high power consumption. A passive, full-optical solution would therefore minimize DSP usage and the related power requirements, and would fit well within a ‘green technology’ paradigm.

Mastering the orbital angular momentum (OAM) of light is currently one of the most popular topics in the field of optics. Since the OAM of light was first described with simplified mathematical models of laser beams (Laguerre–Gaussian beams),6 several researchers have exploited the concept in a large variety of applications. These applications include optical manipulation,7 imaging,8, 9 single-photon detection,10 and mode multiplexing/demultiplexing.11, 12 Indeed, one of the most critical aspects of realizing a passive, full-optical approach for the enhancement of the telecommunication channel capacity is the generation of OAM light modes in optical fibers. Such modes are usually obtained from standard laser beams with the use of a mode converter. Several conversion techniques—based on bulky optical components—have been extensively described in the literature, e.g., hologram-based techniques that exploit computer-programmed spatial light modulators,13, 14 as well as modal filters that are based on the use of spiral-phase plates (SPPs) and that impress the azimuthal angular momentum onto the beam.15 Although these methods are well-established for bulk optics systems, light sources that directly emit OAM modes have yet to be realized and they would represent a major leap toward the implementation of fully integrated high-capacity networks.

In our work we have conducted a parametric investigation of the modal performance of single-mode single-polarization vertical-cavity surface-emitting lasers (VCSELs) that are loaded with a micro-SPP. Our theoretical work, for which we used our in-house VCSEL electromagnetic (VELM) simulator,16 was designed to complement previous experimental work (by another group) in which the commercial VCSEL loaded with a micro-SPP was proposed (see Figure 1).17 VCSELs are axisymmetric semiconductor lasers that radiate orthogonally to their constituent layers. These layers serve as high-reflectivity mirrors and define the 1λ cavity (where λ is the wavelength) of the VCSEL resonator.18 In addition, the circular radiation feature of VCSELs makes them optimal for fiber coupling. In aluminum gallium arsenide VCSELs, an oxide aperture acts as a guide for the optical field and the electric current. This feature, combined with the high reflectivity of the mirrors, means that low threshold currents (at the milliamp level) and high efficiencies can be achieved. Furthermore, the radiation from these devices is emitted at a wavelength of about 850nm, i.e., where the electrically pumped gallium arsenide quantum wells that compose the active region exhibit the maximum material gain. 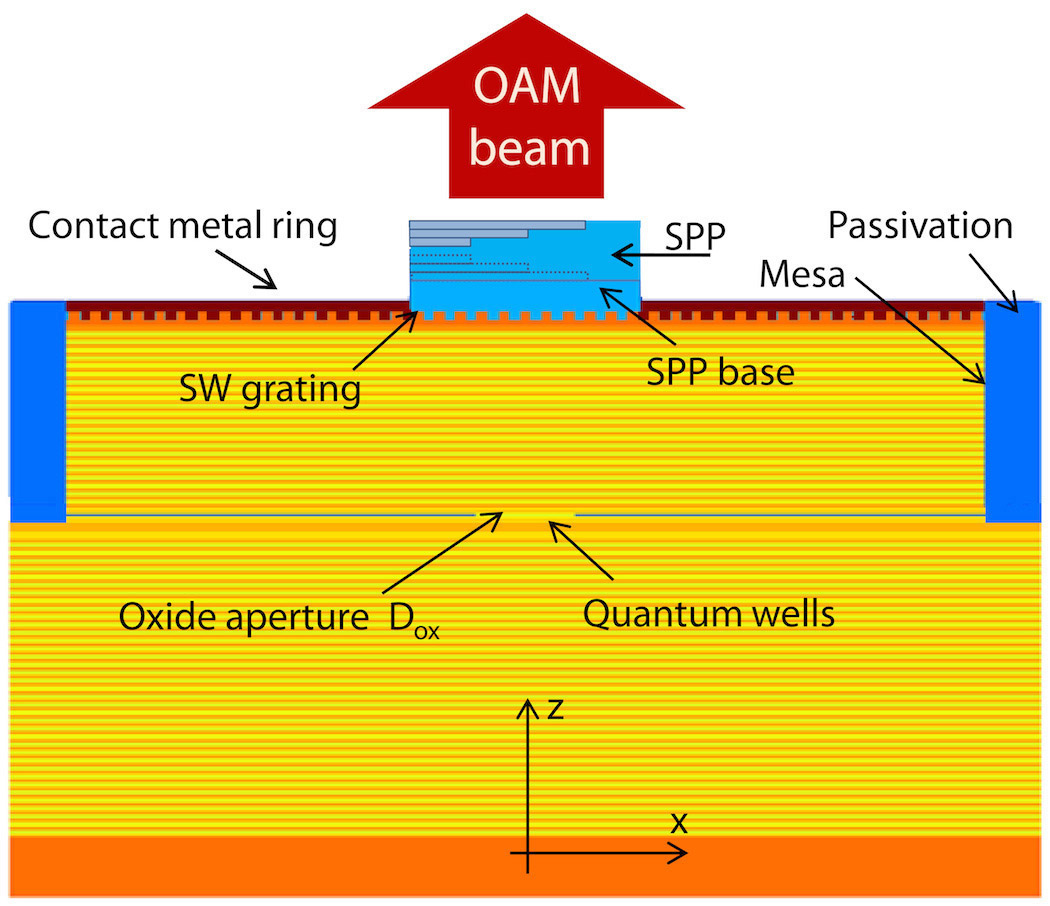 Figure 1. Schematic diagram of a vertical-cavity surface-emitting laser (VCSEL), loaded with a spiral-phase plate (SPP), which can be used to generate an orbital angular momentum (OAM) beam. The sub-wavelength (SW) grating and axes are not shown to scale.5

The experimentally produced SPP-VCSEL was obtained by growing a pillar of silicon nitride on the emitting aperture, and a focused ion beam manufacturing process was used to obtain the SPP.17 In the experimental study, it was also shown that the device could directly emit OAM modes. This SPP-VCSEL device is thus an extremely interesting prospect owing to its compactness, low power consumption, and low cost.

Our theoretical work is based on expanding the unknown VCSEL field, in terms of cylindrical wave functions. In our approach, the expansion coefficients are propagated by means of a generalized transmission matrix formalism, which is based on coupled-mode theory. The condition of a mode repeating itself after a full-cavity round-trip is rephrased in terms of an eigenproblem. Its solutions provide the modal wavelengths, the corresponding threshold gains, and field topographies. Our technique is computationally efficient and finds the modes of complex 3D structures (not axisymmetric) within a few minutes on a modern PC.19, 20 As an example, the simulated field profiles for an unprocessed VCSEL and for three micro-SPP geometries (used to obtain OAM beams with different topological charges) are shown in Figure 2. 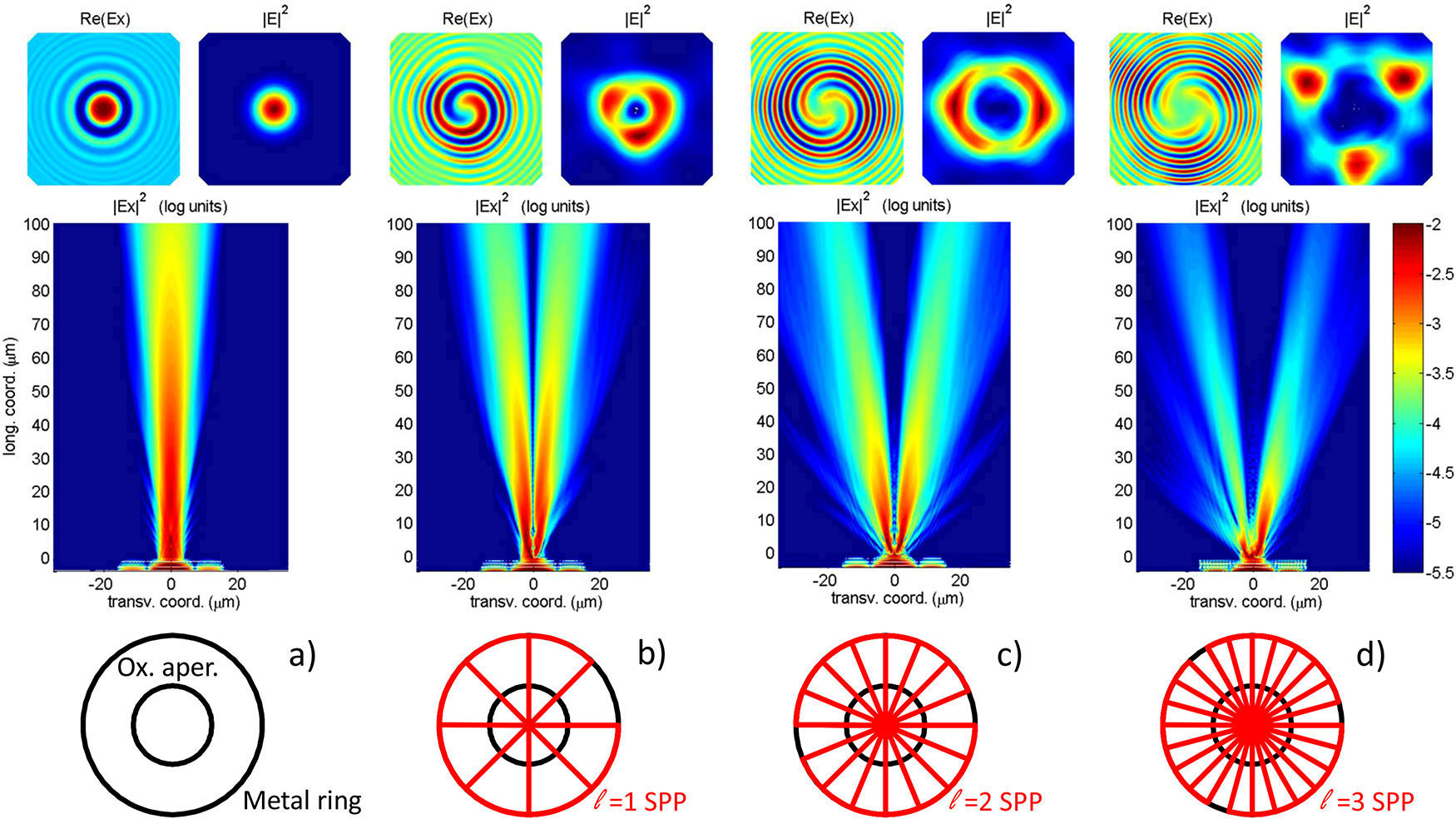 Figure 2. Modal profiles of four VCSEL devices. (a) A bare device and three devices loaded with SPPs that have topological charge (ℓ) of (b) 1, (c) 2, and (d) 3. The maps in the top part of the figure show a 30 ×30μm2area, at a distance of 100μm from the outcoupling section. The images in the middle row are cross-sectional cuts—in the x (transverse coordinate) and z (longitudinal coordinate) directions—through the field intensity. The transverse geometries of the devices (with the SPPs in red) are shown at the bottom. Ox. aper.: Oxide aperture. E: Electric field. Ex: Component of the electric field in the x-direction. Re(Ex): Real part of Ex.5

We present the results of a preliminary, qualitative comparison between the modes of the SPP-VCSEL device (ℓ of 1) and their ideal (i.e., Laguerre–Gaussian) counterparts in Figure 3. From our VELM results it is also possible to compute a more quantitative estimate of the OAM mode's purity and to thus evaluate the modal performance of the device.5 The simulated mode purities agree with the measured values previously reported.17 For instance, we obtain results of 85, 86, and 78% for the fields in Figure 2(b–d). These results compare well with the experimental data for the corresponding fields, i.e., 89, 84, and 78%, respectively. In an extended simulation campaign, we proved the robustness of the SPP-VCSEL design for most variations. We found only one exception, which was the SPP misalignment with respect to the VCSEL axis. From our results shown in Figure 4, a degradation of the far-field patterns can be observed. In addition, the decreasing efficiency trend, with increasing misalignment, is illustrated. 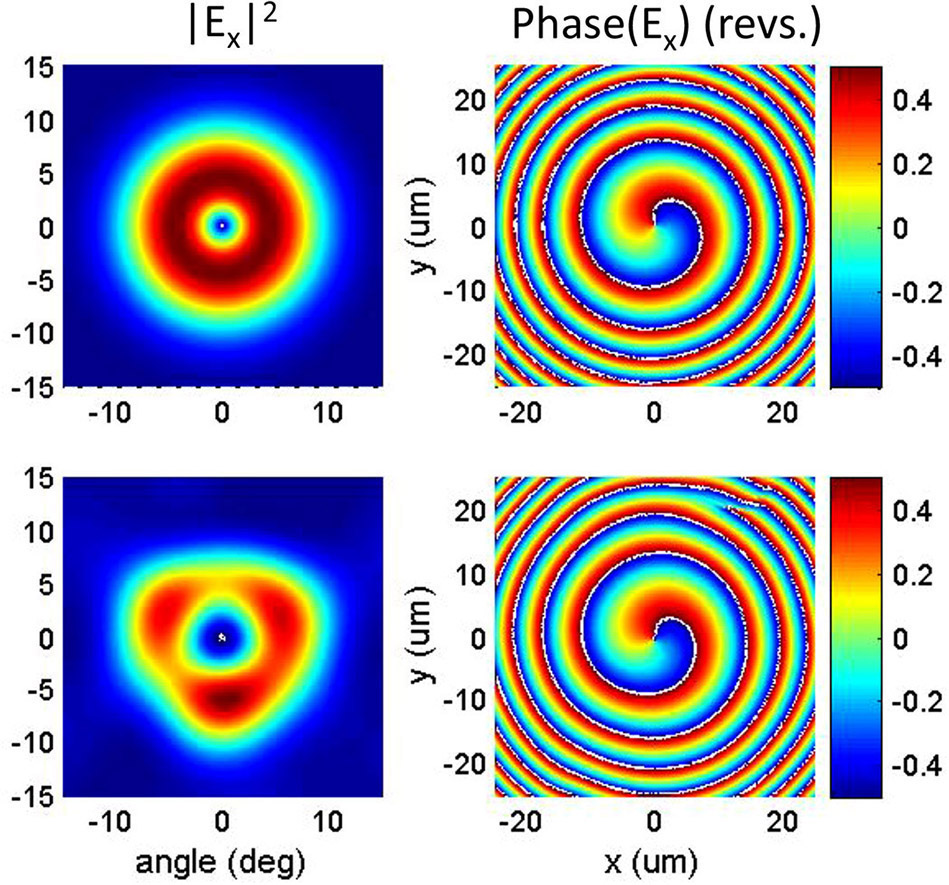 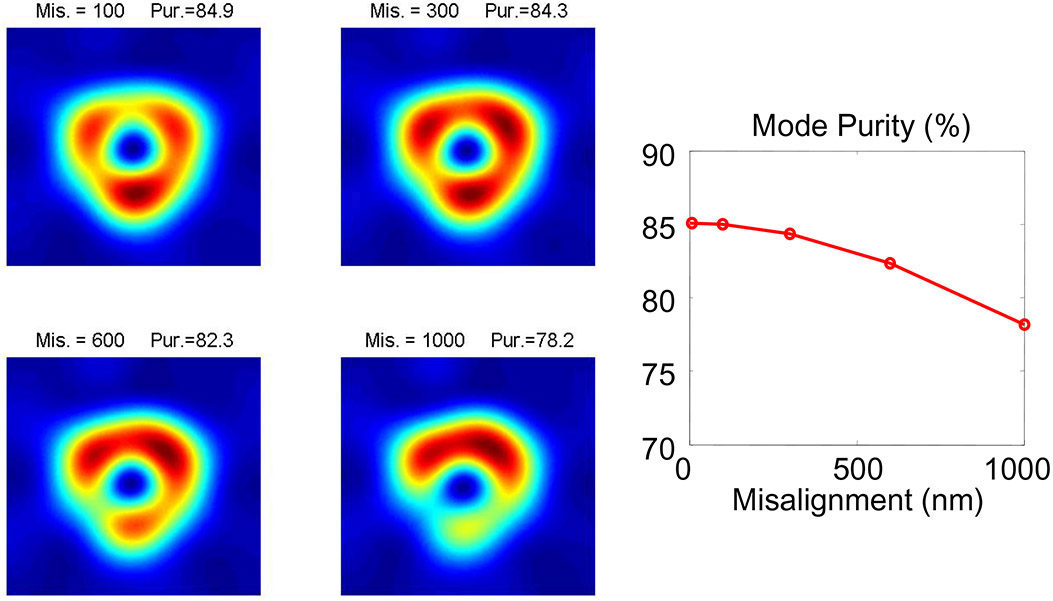 Figure 4. The effect of misalignment (the distance between the SPP and VCSEL axes) on ℓ=1SPP-VCSEL mode. Far-field intensity maps are shown on the left, where the misalignment (Mis) and mode purity (Pur) are given in nm. (Right) The relationship between mode purity and misalignment.5

In summary, we have developed a theoretical approach to assess the modal performance of VCSELs. In particular, we have used our computationally efficient technique to verify a previously experimentally proposed device that is loaded with a spiral-phase plate. The effectiveness, speed, and reliability of our VELM simulator also open up the possibility of exploring other implementations of SPP-VCSELs. In our future work, supported by technological affordability studies, we hope to further develop these devices, improve the purity of the emitted OAM modes, and reduce the manufacturing costs associated with the VCSELs.