In recent decades, the semiconductor component industry has made great efforts to reduce as far as possible the critical dimensions enabled by photolithography. Most of this research has focused on increasing optical resolution by adopting higher numerical apertures and shorter wavelengths: ultimately down to an extreme UV (EUV) wavelength of 13.5nm.1 In the early 2000s industry observers predicted that by 2016, EUV lithography would have matured to a level where it could compete (in terms of volume production) with the resolution limits of immersion lithography. However, this is not yet the case. To further improve resolution, alternative techniques (e.g., multiple patterning) are now being developed to reach critical dimensions that are beyond the optical resolution limit.2 These endeavors have resulted in more densely packed and 3D photolithography patterns and structures, including the through-silicon via—a high-performance vertical connection—and fin field-effect transistors (3D transistors that feature raised, fin-like channels in the silicon substrate). Several inspection and metrology methods have been developed to control these 3D photolithographic processes.

An optical method known as through-focus optical microscopy (TSOM) involves scanning a target through the focus of an optical microscope.3 Unlike the optical information taken from a single in-focus image, the information in a TSOM image can be used to conduct 3D inspection and metrology with nanometer-scale lateral and vertical sensitivity4,5 (on par with scanning electron microscopy). TSOM 3D information is indirectly extracted by differentiating a target TSOM image from reference TSOM images. Therefore, the sensitivity and accuracy of this information depend strongly on the scanning stability, the presence of residual aberrations in the imaging optics, the degree of illumination uniformity, and similarities between the conditions in which the target and reference TSOM images are taken or simulated. To overcome issues of scanning instability and simulation similarity, Ryabko and co-workers proposed two approaches.6,7 Their first method is motion-free TSOM scanning, in which the chromatic aberration in an imaging optical system and a tunable light source generate defocused diffraction patterns.6 Analysis of these patterns enables inspection of the target object. Ryabko's second approach takes into consideration the optical aberrations of the measurement setup when building a TSOM reference library.7

Considering these approaches, in 2014 we set out to investigate core technologies for developing in-line TSOM inspection and metrology tools.8–11 First, we integrated a TSOM tool into an existing patterned wafer inspection tool by moving the wafer plane.12 As expected, we experienced optical axis instability during the scanning process (see Figure 1). We encountered position uncertainty when registering through-focus image layers, even after applying a registration algorithm, as predicted by Ryabko. We then implemented a new TSOM tool—based on the Ryabko proposal—on an optical bench that enabled scanning through-focus images by optical and mechanical defocusing (see Figure 2). We also installed a wavefront sensor and a beam profiler to monitor the beam quality and to quantify the optical and mechanical instability. We found that the motion-free method lacks the proper level of light intensity for in-line applications, and is associated with instability induced by non-chromatic axial aberrations of the imaging optics, such as axial coma. In addition, the optical aberration and illumination intensity profiles vary from machine to machine and from shot to shot, and building up a new TSOM library for each setup can be time-consuming. We therefore concluded that the approaches suggested by Ryabko and co-workers are impractical for implementation in in-line operations. 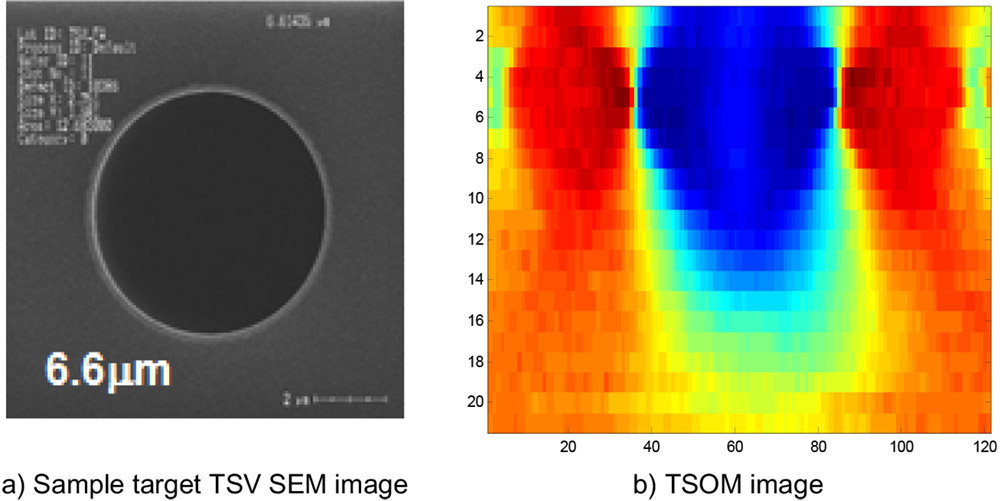 Figure 1. Sample images of through-silicon via (TSV) by (a) scanning electron microscope (SEM), and (b) through-focus optical microscope (TSOM) taken using an existing wafer inspection tool where the wafer is moved along the optical axis. 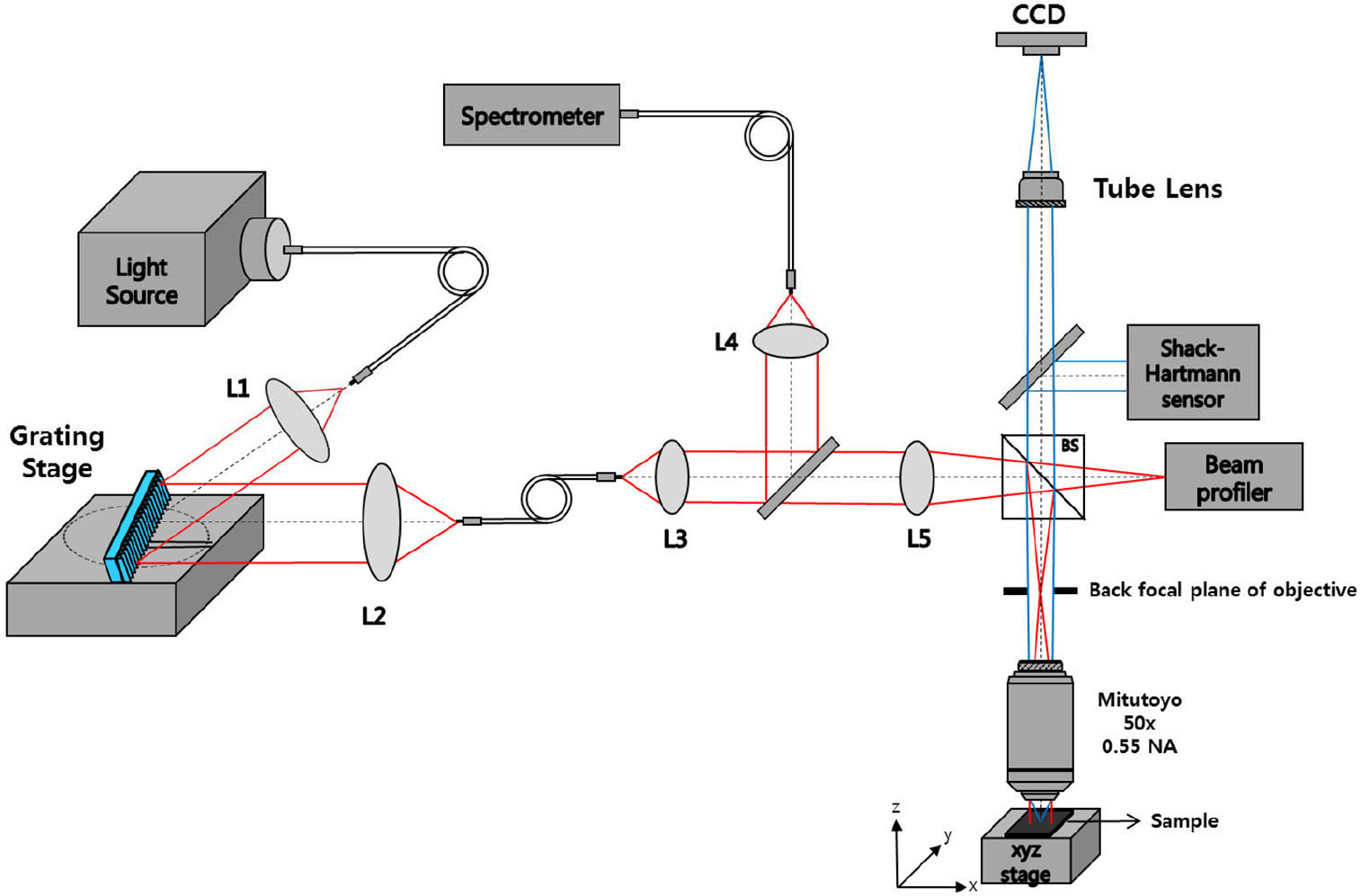 To improve TSOM inspection and metrology tools, we have developed two new TSOM techniques that use adaptive optics (see Figure 3).8 In the first, we use a high-order deformable mirror with a wavefront sensor to achieve through-focus optical scanning at very high (∼KHz) speed, without exerting any external mechanical influence on the sample or on the optical system. Any residual aberration in the imaging optics can be compensated in real time. In our second approach, we use a simple tip/tilt mirror with a quad cell to conduct optical scanning by moving a wafer stage. Any optical-axis instability is compensated in real time. The first approach was proposed for an in-line TSOM tool. The second could easily be used in conjunction with existing inspection tools that undertake TSOM operations when necessary. We are currently testing these methods, and expect to have evaluated them by the end of 2016.

Figure 3. Two representative configurations of adaptive optics applied to TSOM.13(a) A high-order deformable mirror with a wavefront sensor enables through-focus optical scanning at very high (KHz) speed. (b) Optical scanning is achieved by moving a wafer stage, while any instability along the optical axis is actively offset. θx, θy: Angles of tip/tilt.

In summary, we have examined TSOM inspection and metrology methods and found that these approaches require additional modification to address the optical-axis instability and residual aberration issues that arise during the through-focus scanning process. Furthermore, optical aberrations and illumination intensity vary from machine to machine and from shot to shot, and require consideration or compensation for in-line TSOM operation. We present two TSOM methods in which the optical axis can be held constant by applying adaptive optics techniques as an initial remedy to the current issues. We now hope to evaluate these methods by the end of 2016 and will report the results.

Jun Ho Lee received his BSc from the Korea Advanced Institute of Science and Technology in 1994, and his MSc and PhD from the University of London in 1995 and 1999, respectively. His research interests include lens design, optical instrumentation, and adaptive optics for astronomical and industrial uses.