By connecting telescopes electronically, rather than optically, atmospheric turbulence is avoided and microarcsecond resolutions may be achieved.
18 May 2016
Dainis Dravins and Colin Carlile

Much of the progress that has been made in astronomy has been driven by improved imaging capabilities. Amplitude/phase interferometers—operating over baselines of a few hundred meters—are the current state-of-the-art optical facilities.1, 2 Indeed, tantalizing results from such instruments are starting to reveal some stars as resolved objects. In these images, the stars may be flattened or deformed because of rapid rotation, engulfed by shells, covered by spots, or surrounded by obscuring clouds.3, 4 Most bright stars, however, require baselines of several kilometers to enable any kind of surface imaging. Furthermore, since amplitude interferometers require stabilities of within a fraction of an optical wavelength, this standard of imaging becomes particularly challenging (especially at shorter visual wavelengths).

In contrast to amplitude/phase techniques, with optical intensity interferometry, a second-order effect of light waves (the way the instantaneous intensity fluctuations correlate between light measured by separate telescopes) is exploited.5 This approach was first developed by Hanbury Brown and Twiss, who built an instrument in Narrabri, Australia, to measure stellar diameters. As this was fundamentally a two-photon measurement, it is often thought of as the first experiment in quantum optics. The important observational advantage of intensity interferometry is that it is practically insensitive to both atmospheric turbulence and telescope optical imperfections. This means that very long baselines can be used, and observing can be conducted at short optical wavelengths. In such setups, the telescopes are only connected electronically, with no optical links between them. The noise budget therefore relates to electronic timescales (i.e., nanoseconds) and light-travel distances of centimeters (or even meters) rather than those of the light wave itself. A time resolution of about 10ns corresponds to a light-travel distance of 3m. Atmospheric path-lengths and telescope imperfections thus only need to be controlled within some reasonable fraction of 3m.

In this work,6 we provide an overview of the intensity interferometry technique. We also review how this approach can be used to improve the resolution of optical measurements in astronomy. The basic underlying concept of intensity interferometry is illustrated in Figure 1. When the telescopes are close together, the measured fluctuations are almost simultaneous and thus correlated in time. With increasing distance between the telescopes, however, the fluctuations gradually become decorrelated. The rate at which this decorrelation occurs provides a measure of the spatial coherence and, therefore, of the spatial properties of the source. Since the signal is electronic, it can be copied, transmitted, or saved (analogous to radio interferometry). Furthermore, a large array of telescopes can enable the formation of many baselines between different telescope pairs, without any additional logistical effort.7 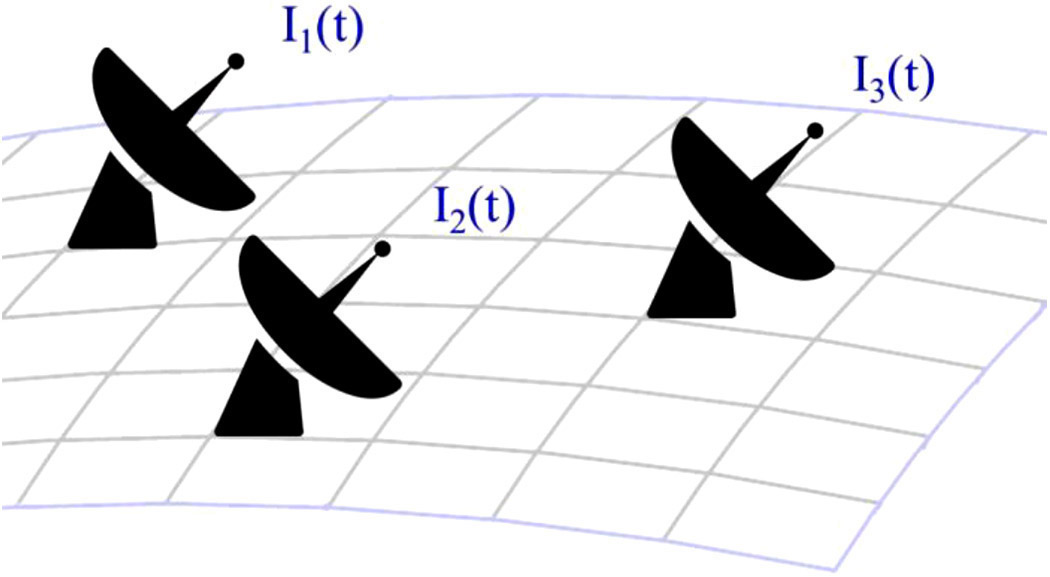 Figure 1. In the technique of intensity interferometry, spatially separated telescopes are used to observe the same source, and the measured time-variable intensities—i.e., I1(t), I2(t), I3(t)—are electronically cross-correlated between different pairs of telescopes.

A 2D ‘diffraction pattern’ (the amplitude of the Fourier transform) of the source can be obtained from intensity interferometry observations (see Figure 2). Although such a pattern places stringent constraints on the source, specific algorithms must be applied to reconstruct full images. An example of measurements of an artificial star, which we made with an array of small telescopes in the laboratory, is shown at the bottom of Figure 2.8,9 To make these measurements, we operated the small telescopes as an intensity interferometer with 180 baselines. These images are rudimentary, but they represent the first instance of diffraction-limited images being obtained from an array of detached optical telescopes, connected only by electronic software. 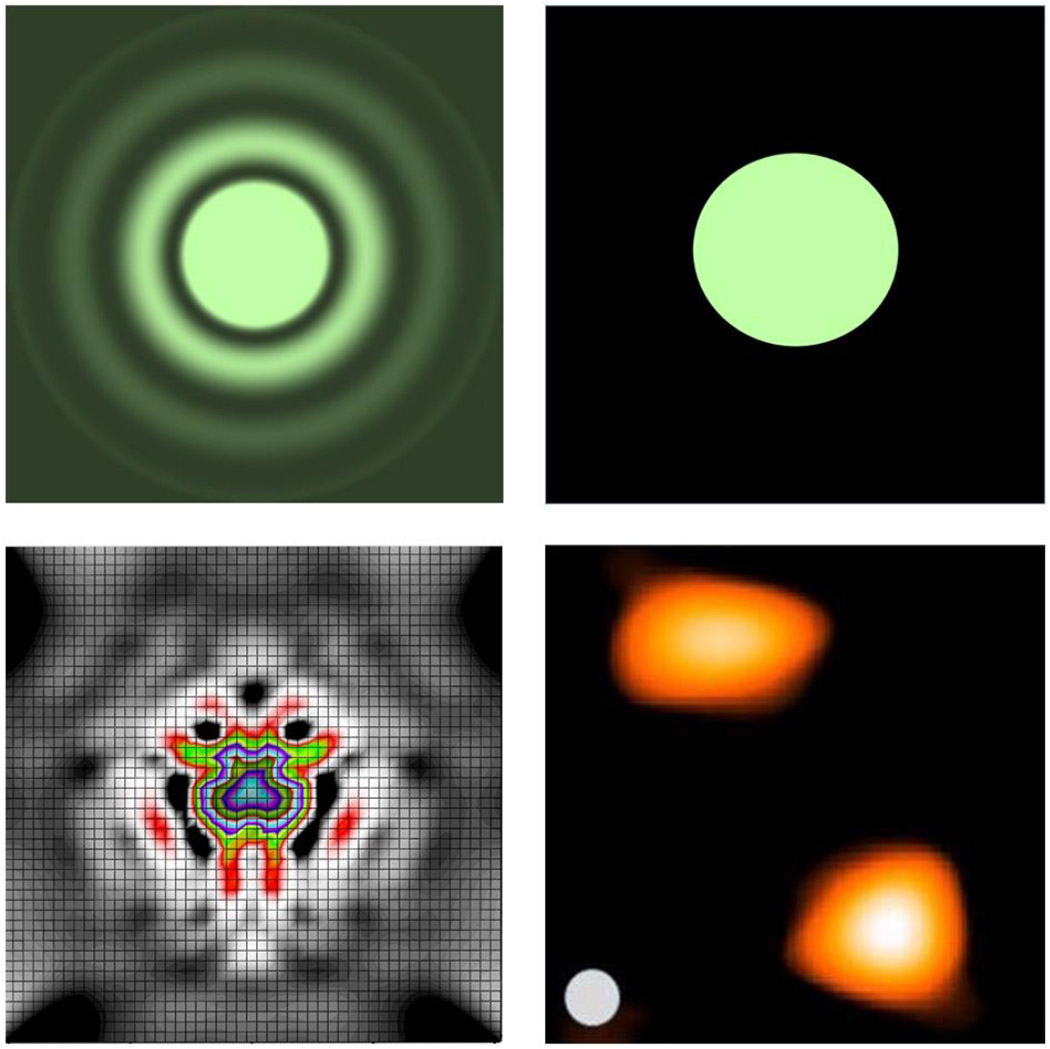 Figure 2. Fourier-plane and image-plane information. The left column shows 2D ‘diffraction patterns’ that correspond to the images shown on the right. The Airy diffraction pattern (top left) can be recognized as originating from a circular aperture. A measured pattern from an artificial asymmetric binary star (bottom left) is built from intensity interferometry measurements over 180 baselines between pairs of laboratory telescopes. The reconstructed image is shown on the bottom right, where the pale gray circle indicates the diffraction-limited spatial resolution realized by an array of optical telescopes connected only through electronic software (i.e., with no optical links).4,5

Although the problem of atmospheric turbulence can be circumvented with intensity interferometry, this takes place at an associated cost. For example, a realistic time resolution of a few nanoseconds is much longer than the coherence time of broadband light (i.e., over which the intensity fluctuations are fully developed). This means that the fluctuations become smeared out over many coherence periods. Large telescopes are thus required to obtain precise measurements with good photon statistics. In fact, such large facilities are currently being installed, although for a different primary purpose. The largest example of such a project is the Cherenkov Telescope Array (CTA).10 This kind of telescope will be used to study cosmic gamma-ray sources from the observation of visual flashes of ‘Cherenkov light’ initiated by incoming gamma rays in the upper atmosphere. It is the current plan for the CTA to have some 100 telescopes spread over an area of a few square kilometers, with a combined light-collecting area of about 10,000m2.11 Although the CTA will mainly be devoted to gamma-ray studies, other applications are also envisaged.9 These, secondary, observations could be conducted during nights with bright moonlight, when the faint Cherenkov light flashes are difficult to detect.

If baselines of 2 or 3km could be employed for intensity interferometry at short optical wavelengths, the resolution could approach 30 microarcseconds. This is an unprecedented value in optical astronomy and is almost three orders of magnitude better than the Hubble Space Telescope.12 Such astronomical imaging—on scales of tens of microarcseconds—has hitherto been achieved only with radio interferometers that operate between Earth and deep space. For optical astronomy, such values represent completely novel parameter domains. With the image in Figure 3, we illustrate the true meaning of such resolutions. This image is a ‘recognizable’ type of object, i.e., solar-type phenomena projected onto the disk of a nearby star. We also show a hypothetical exoplanet transiting across the star (Sirius). We made the planet's size and oblateness equal to that of Jupiter, but we also fitted it with a Saturn-like ring and four moons. We have assumed that the stellar surface is surrounded by a solar-type chromosphere (shining with a reddish emission line), with protruding prominences and eruptions. It is important to note that the image is not a simulation of any specific observation, but is an image degraded to the angular resolution expected to be obtained with a kilometer-scale complex of air Cherenkov telescopes. 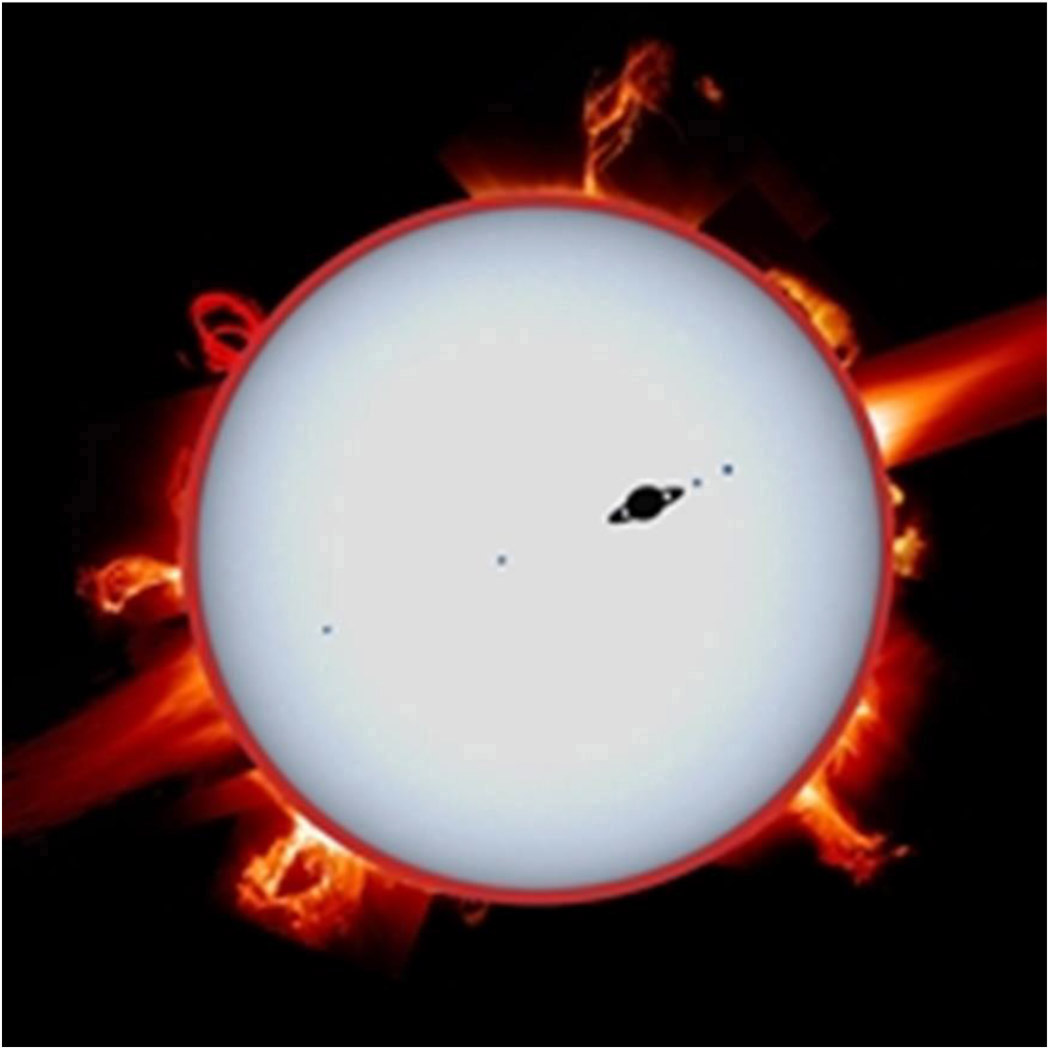 Figure 3. A simulated image of a hypothetical exoplanet (with a Saturn-type ring and four moons) transiting across the disk of a relatively close star (Sirius, with a 6 milliarcsecond diameter) is used to illustrate the significance of a 40 microarcsecond optical resolution. In this image, an active solar-type chromosphere is assumed to be present above the stellar surface.

In summary, we have described and demonstrated the technique of intensity interferometry for high-resolution astronomy observations. In our current work, we are aiming to address the next milestone, i.e., a full-scale demonstration of a stellar observation with one pair of Cherenkov telescopes that are separated by a few hundred meters. This is a preparatory step toward the realization of full-scale interferometric imaging with a dozen or more baselines. Many technological developments have taken place since the pioneering experiments of Hanbury Brown and Twiss. With this technique it should now be possible to achieve a simple, but fundamentally difficult goal, i.e., to view our neighboring stars not just as unresolved points of light, but as extended and fascinating objects.

Dainis Dravins is a professor of astronomy. His research involves precision observations in optical astronomy, including spectroscopy of solar and stellar atmospheres, stellar radial velocities, methods to search for exoplanets, photometry through the atmosphere, astrometry, and quantum optics.

Colin Carlile has an extensive international background in neutron sources and their instrumentation. His recent planning for the European Spallation Source in Lund was acknowledged with an honorary doctorate. He is now beginning research in astronomical instrumentation.