Despite aggressive interventions for cancer, including high-dose-intensity chemo- and radiotherapy, recurrence occurs frequently for advanced-stage disease. An emerging paradigm suggests that localized tumor control is often compromised by increased cancer cell invasion and metastatic escape (where the cancer spreads to other parts of the body).1, 2 That is, even potent therapies that melt away tumors locally can paradoxically lead to invasive outgrowths and distal metastases.3, 4 With difficult malignancies (i.e., those that are tenaciously resistant to standard therapies) a single cycle of treatment fails to kill all the cancer cells, and those that survive are able to mount a response by using a network of cellular signaling pathways to communicate and promote survival, drug resistance, and increased metastasis. These cell communications are stimulated by virtually all modes of therapy, and facilitate an aggressive response to treatment that may ultimately limit patient survival.

Combination therapies hold promise for overcoming these complexities by addressing key mechanisms of tumor recurrence and treatment escape (the ability of cancer/tumor cells to evade treatment). However, co-activation of multiple compensatory signaling pathways limits the efficacy of sequential drug delivery. Furthermore, there are toxic side effects that result from the use of frequent administration of chemotherapeutics and molecular targeted agents. New drug delivery systems are needed to facilitate combination therapies that efficiently induce cell death and also simultaneously shut down multiple mechanisms of tumor regrowth and invasion.

Building on the promise of photocontrolled drug release and optically active nanoparticles,6–9 we implemented the photoinitiated release of multikinase inhibitors (agents that block the function of enzymes that can lead to tumor growth and/or metastases) synchronized with a potent cytotoxic modality. To achieve this, we used a newly developed photoactivable multi-inhibitor nanoliposome (PMIL).5 The PMIL imparts light-induced tumor cell death in synchrony with a photoinitiated and sustained release of inhibitors that suppress multiple tumor regrowth and treatment-escape signaling pathways. The PMIL is a biodegradable delivery system that comprises a lipid shell doped with a nontoxic photoactivable chromophore, benzoporphyrin derivative monoacid A (BPD). The shell encapsulates a biodegradable polymeric nanoparticle that contains the toxic multikinase inhibitor cabozantinib (XL184) (see Figure 1). The outer lipid shell acts as a barrier to nanoparticle erosion and drug release until light activation disrupts the outer lipid shell of the PMIL to initiate sustained release of the multikinase inhibitor. Following intravenous PMIL administration, near-IR irradiation of tumors triggers photodynamic damage of tumor cells and microvessels, and simultaneously initiates drug release from the nanoparticle. The tumor-focused release of the second, toxic inhibitor helps to minimize its systemic exposure (and the promotion of associated toxicities within the body). The action of the inhibitor in the tumor is synchronized with the action of the photodamage, thus mopping up transient bursts in key cell-signaling pathways. 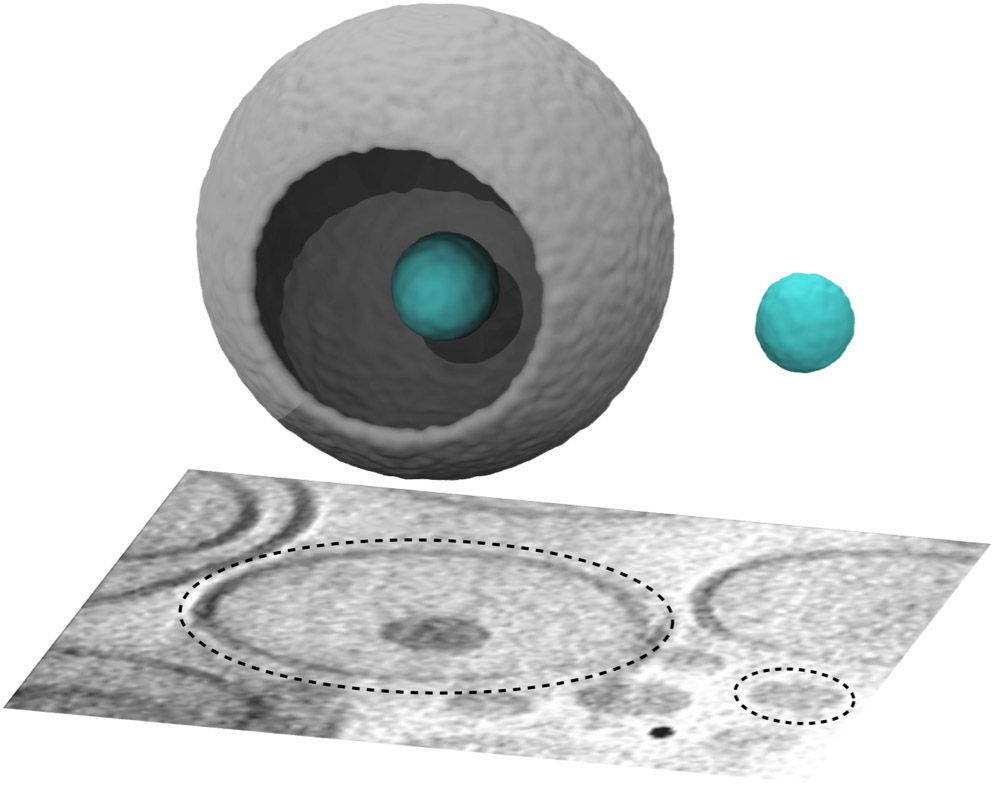 To test this new approach, we administered a single PMIL treatment to preclinical mouse models of pancreatic cancer. We compared the results with the administration of each therapy component individually or in combination using conventional delivery strategies. A single PMIL treatment using low doses of a multikinase inhibitor achieves sustained tumor reduction and suppresses metastatic escape, whereas combination therapy by co-administration of the individual agents shows significantly reduced efficacy. The PMIL uniquely achieved prolonged tumor reduction in the pancreatic cancer mouse models (see Figure 2). A key finding is that the PMIL suppresses metastatic escape in an aggressive pancreatic tumor model prone to metastatic spread to the liver, lymph nodes, and lungs. We observed no decrease in mouse body weight (a common metric of toxicity) and the single PMIL treatment in this study used more than a thousand times less toxic inhibitor than do standard chronic treatments necessary to reduce tumors in other cancer mouse models. 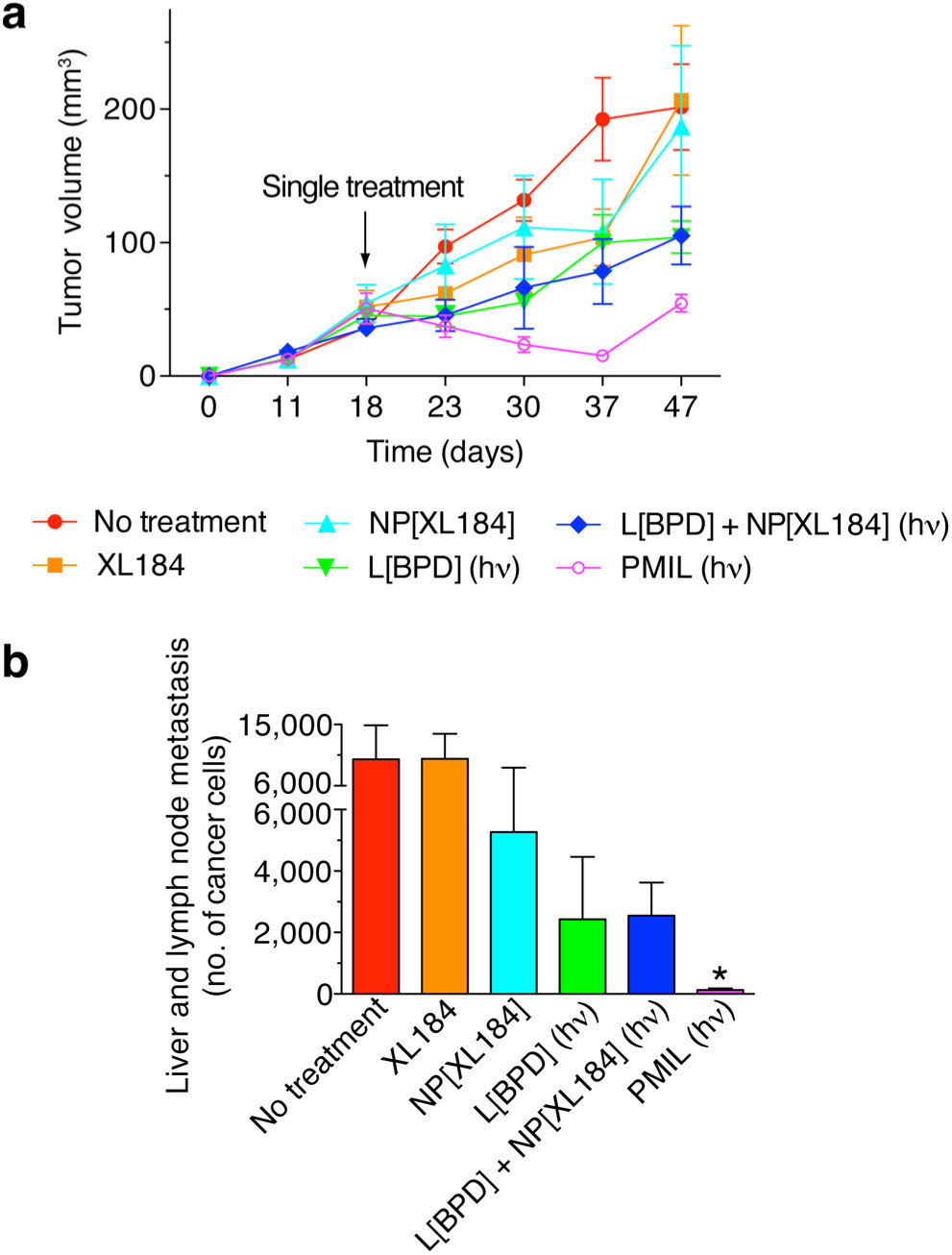 In summary, the complexities of cancer necessitate the innovation of drug delivery platforms that are capable of addressing multiple tumor compartments as well as treatment escape mechanisms. Nanoscale drug delivery vehicles can facilitate multimodal therapies for cancer by promoting tumor-selective and sustained drug release, which relaxes the normal requirements for high-dose-intensity drug administration. However, few drug delivery platforms are effective, because cancer cells develop ways to resist and evade treatment. Our PMIL approach offers new prospects for cancer therapy by enabling spatiotemporal control of drug release while reducing systemic drug exposure and associated toxicities. Furthermore, the PMIL concept is amenable to a number of molecular inhibitors and chemotherapies. The challenge remains to develop the PMIL approach further to address metastatic disease, where diffuse—rather than focused—light irradiation is needed to reach disseminated tumor nodules. Our prior work10 to develop tumor cell-targeted and -activated photomedicine with sufficient selectivity to treat multifocal micrometastases offers potential. Now we need further innovations in chemical synthesis and protein engineering to integrate this development with the PMIL nanotechnology.

Bryan Spring is an assistant professor of physics and a visiting scientist at the Wellman Center for Photomedicine at Massachusetts General Hospital and Harvard Medical School. His research aims are to develop online molecular imaging for monitoring tumor cell signaling, and the rational design of combination treatments.

R. Bryan Sears is an assistant professor of chemistry. His research focuses on the development of rationally designed composite soft material nanostructures for light-triggered drug delivery, and the diverse photochemistry of metal complexes as drug delivery systems for traditional and photoactivated therapies.

Tayyaba Hasan is a professor of dermatology and a professor of health sciences and technology (Harvard-MIT). Her scientific efforts are focused on photochemistry-based approaches for treatment and diagnosis of disease, and the development of molecular mechanisms and image-guided combination treatment regimens.

Elizabeth Villa is an assistant professor of chemistry and biochemistry. Her team develops new tools for imaging the structures of macromolecular complexes in their natural environment, the cell. To this end, she develops and uses novel methods of cryo-electron tomography, image processing, and molecular modeling at different scales.

Steve Pereira is a consultant gastroenterologist and is professor of hepatology and gastroenterology. His clinical and research interests center on the causes, early diagnosis, and treatment of liver and pancreatic cancer.