Conventional absorption-based x-ray imaging has been a valuable technique for aviation security inspection, medical imaging, and a variety of non-destructive imaging applications for decades. More recently, however, it has been shown that x-ray differential phase-contrast (DPC) imaging has the potential to improve upon conventional x-ray imaging techniques.1–3 In the DPC process, two material properties—phase scattering and small-angle scattering (the latter is also known as dark-field imaging)—are exploited. In current x-ray DPC imaging systems, an incoherent x-ray source and three gratings are used.4 The first of these gratings—a source amplitude grating (G0)—is used to create partially spatially coherent x-rays that propagate toward a phase grating (G1). X-rays that pass through G1 are then diffracted and form an interference pattern at a location of Talbot self-imaging,4–6 where an analyzer amplitude grating (G2) is located. There are several aspects of three-grating x-ray DPC imaging systems, however, that reduce their utility in real-world applications.

The pixel dimensions of the x-ray detector panel in standard three-grating x-ray DPC systems are usually too large to resolve the interference pattern. A phase stepping technique is therefore used, in which G2 is moved—in a few steps—over a period of the interference pattern.7 This resolves fluctuations in the intensity of the interference pattern in the lateral dimension. Furthermore, the image field of view (FOV) is limited by the amplitude gratings G0 and G2. It is thus necessary for both G0 and G2 to have a high amplitude-modulation depth so that an acceptable (although still low) degree of partial spatial coherence and fringe contrast at the detector can be obtained, respectively. Even at low angles, the gratings (which have a high aspect ratio) block x-rays from the source, which limits the image FOV to a few degrees. With a conventional 28keV x-ray DPC system, the size of the imaging area can be restricted to a few centimeters (or less, with systems operating at higher x-ray energies). In addition, when an incoherent x-ray source is used, the fringe visibility is usually 10–15%. This means that a long exposure time is required to acquire high-quality images. Although the fringe visibility can be improved by increasing the amplitude modulation depths of the amplitude gratings, a typical modulation depth is already on the order of 100:1. Further increases in modulation depth limit the image FOV even more and make fabrication of the gratings extremely difficult. Moreover, the phase stepping of G2 requires precise mechanical movements, which further reduces the speed and stability of the imaging process.

To overcome these challenges, we have developed a new system (see Figure 1), in which we replace the conventional source and the G0 grating with a photoemitter x-ray source array (PeXSA) that is a source of partially spatially coherent x-rays.8 In the PeXSA, a patterned light beam illuminates a photocathode. This creates a patterned electron beam that strikes a tungsten target to produce a partially coherent x-ray beam. In our system, we also replace the G2 grating with a matched photonic-channeled x-ray detector array (PcXDA) that serves as the x-ray detector. The PcXDA transforms x-ray interference patterns into optical fringes with the use of a scintillator and a confocal imaging microlens array. Only the G1 grating, which can readily be fabricated in the required size, is retained in our system. 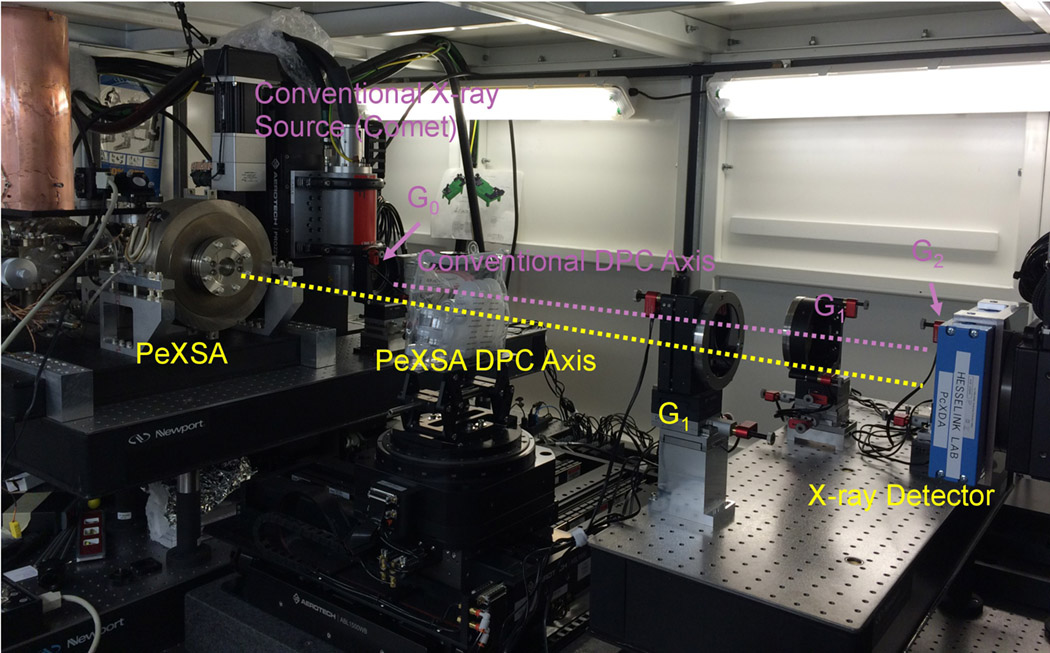 Figure 1. The Stanford ‘Fates’ x-ray differential phase-contrast (DPC) imaging setup is shown in yellow, including the photoemitter x-ray source array (PeXSA), the PeXSA DPC axis, and the phase grating G1. The previous three-grating setup (in purple), in which gratings G0, G1, and G2, as well as a conventional x-ray source and DPC axis are used, is shown for comparison.

We have named our single-grating x-ray DPC imaging system ‘Fates’ because of the analogy between its three signatures (absorption, phase, and scatter)—used to determine whether an object poses a threat—and the three Fates in Greek mythology (believed to determine human destiny). Our Fates system has several advantages, for example, we avoid the use of amplitude gratings (which are relatively difficult and expensive to fabricate). In addition, the aspect ratio of the patterned x-ray source in the PeXSA is typically less than unity. This increases the FOV of our x-ray DPC imaging system to more than ±35°. Furthermore, with the PcXDA, a 100–150nm-thick patterned chromium mask is sufficient to analyze the optical fringes that are generated. The aspect ratio of this mask is normally less than 0.1, which enables a wide FOV. With our PeXSA x-ray source, in combination with the PcXDA detector, we can improve the fringe contrast by a factor of two or three (to approach >50%) compared with the best conventional DPC systems. The enhancement in image visibility, which arises from the combined use of the PeXSA and PcXDA, eliminates the need for a long image acquisition period.

In a trial of our Fates system for imaging the contents of a carry-on bag, we used a Comet XRS-225VF x-ray source (with the tube voltage set to 80–160kVp and the focal spot size set to 0.5mm). The step size of the grating was one sixteenth of a period (i.e., 4.8μm) for a design energy of 40keV. In addition, we set the detector to 1 × 1 binning, with an integration time of 100ms and a total frame time of 6.4s (chosen to minimize noise and improve image quality). We also performed mechanical scanning with the use of an Aerotech ANT95-L nanopositioning stage. Under these conditions, we obtained images of a carry-on bag, over at least 11 stitch fields in one projection (see Figure 2). By integrating signals derived from multiple projections, we were able to determine refractive index differences between the liquids in the containers within the bag. 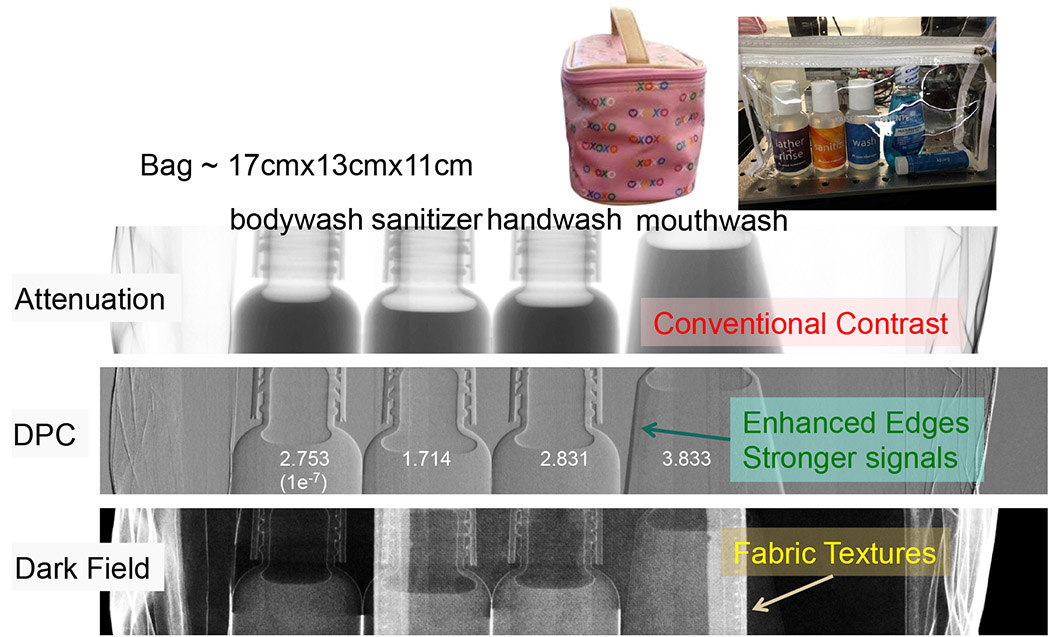 Figure 2. The proposed x-ray DPC system can be used to reveal liquids and powders in the cluttered environment of a carry-on bag. These images were obtained using a phase grating (at an energy of 40keV) and an x-ray tube (at a voltage of 160kVp). The numbers on the row marked DPC indicate differences in the refractive index, with respect to 1.

In summary, the preliminary results we have obtained with our Fates system have provided significant improvements in the identification of objects for aviation security purposes. The combination of the attenuation, DPC, and dark-field signatures allows us to make improved measurements of the contrast, object resolution, and fine structure of materials (see Figure 2). In our future research, we will study if our x-ray DPC imaging approach—with its tri-signature imaging mode—can be used to improve detection and imaging of variations in the density of soft tissue and tumors. We are also developing a new single-step data acquisition method, which is based on research into grating structures that can be shifted laterally.9 This method will further reduce the data acquisition time by a factor of N (where N is the number of steps in which the G2 grating is moved in the conventional method).

We gratefully acknowledge the support of the Department of Homeland Security (contract HSHQDC-12-C-00002). We also acknowledge contributions to this work by Sergei Orlov, Dieter Akemeier, Zach Russell, Ludwig Galambos, William Aitkenhead, George Herring, Piero Pianetta, and Fabian Pease (all at Stanford University), as well as Youngsik Kim, Chris Summit, and Sung Lin Wang (at the University of Arizona). Lastly, we thank Yuri Hesselink for the suggestion of the name ‘Fates’ for our system.