Controlling the growth of photocatalytic nanocrystals for hydrogen production

A simple method for controlling the shape of cadmium sulfide nanocrystals has been developed, and the nanocrystals used as photocatalysts for water splitting.
24 May 2016
Maochang Liu and Xixi Wang

The use of hydrogen as a fuel is regarded as a promising way to address the current concerns around environmental pollution and the depletion of fossil fuels. An ideal method of producing hydrogen for this purpose is water splitting using a photocatalyst, a research area that dates back to the 1972 discovery of the Fujishima-Honda effect (the decomposition of water when exposed to light in the presence of a titanium dioxide electrode).1–3 The successful commercialization of this technology depends on the development of a semiconductor photocatalyst with a large surface area that has both high activity and stability. Over the past few decades, considerable progress has been made in the design and synthesis of a myriad of semiconductor photocatalysts for water splitting. Some notable examples include metal sulfides, nitrides, oxides, and their combinations.3–5

Cadmium sulfide (CdS) has been extensively studied as a semiconductor photocatalyst, because it is visible light-active (enabling sunlight to drive the reaction) and possesses a conduction band suitable for water splitting (facilitating the conversion of hydrogen ions in water to hydrogen gas). The catalytic activity of CdS is significantly affected by the arrangement of atoms on the surface of the material and, therefore, the types of crystal facets—flat faces—present is important. For example, the {0001} facets of CdS are usually more active in photocatalytic hydrogen generation than other facets. The recent literature contains many reports regarding the preparation of CdS with various crystal shapes. However, a number of challenges still need to be addressed in this field, including systematic research on the crystal growth mechanism, targeted design of CdS crystals, and investigation of their shape-dependent properties. Here, we present the results of our investigation into controlling the growth of CdS nanocrystals by altering the rate of reaction.

In principle, crystallization processes that involve the formation of growth monomers (generally discrete molecules), followed by nucleation, and subsequent crystal growth, can be controlled using the kinetics of the reaction. By regulating the speed of the reaction, we can control a wide variety of crystalline transformations by changing the potential for particular growth patterns during crystallization. In a recent paper, we demonstrated that this strategy can be very effective in the synthesis of CdS nanocrystals with finely tuned shapes.6 The success of the strategy relies on using a syringe pump to introduce the precursor ions to the reaction mixture at a controlled rate. We are able to control the concentration of CdS growth monomers, and hence the growth potential, in the reaction by simply changing the injection rate of the precursor solution.

facets: see Figure 1(a). When we rapidly inject the Cd2+ precursor solution, the high chemical potential of the bulk solution makes it possible for the CdS growth monomers to deposit on both types of facet. However, to minimize the total surface energy, the deposition of CdS monomers on the {0001} facets is more favorable, resulting in the formation of CdS nanocones: see Figure 1(b). By contrast, if we inject the Cd2+ solution very slowly, the lower chemical potential of the bulk solution enables deposition on the 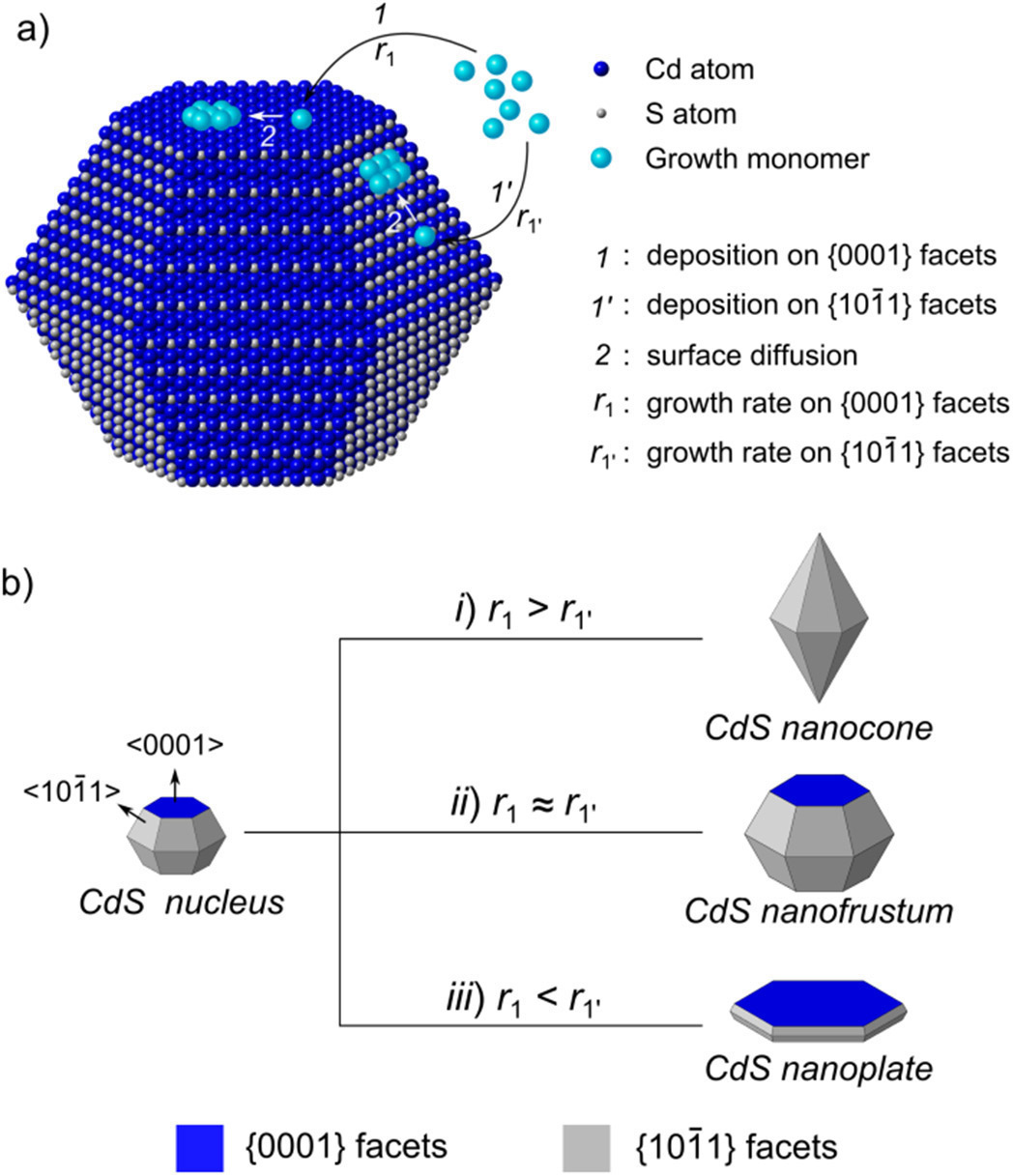 Figure 1. Schematic illustration of (a) the major steps in the growth process of a cadmium sulfide (CdS) nanocrystal and (b) the formation of a CdS nanocone, nanofrustum, and nanoplate, simply controlled by adjusting the Cd2+injection rate. Cd: Cadmium. S: Sulfur.

The successful synthesis of three different CdS nanocrystal forms allowed us to systematically study how crystal shape affects the photocatalytic activity of these nanocrystals in the water splitting reaction. We conducted photocatalyzed water splitting reactions using each nanocrystal type, and monitored the rates of hydrogen production: see Figure 2(a) and (b). These tests show that the CdS nanoplates (with primarily {0001} facets) have the highest activity of the three nanocrystal forms. As the metal atoms in the CdS nanocrystals are the active sites in the water splitting reaction, the presence of three-coordinate Cd atoms (Cd3c)—in which water molecules can easily interact with the nanocrystal—is thought to be one of the most important variables in determining the reaction rate. Figure 2(c) and (d) shows that {0001} facets possess more active Cd3c atoms than

facets, which explains why {0001} facets are more active in the water splitting reaction, and is in good agreement with our experimental results. 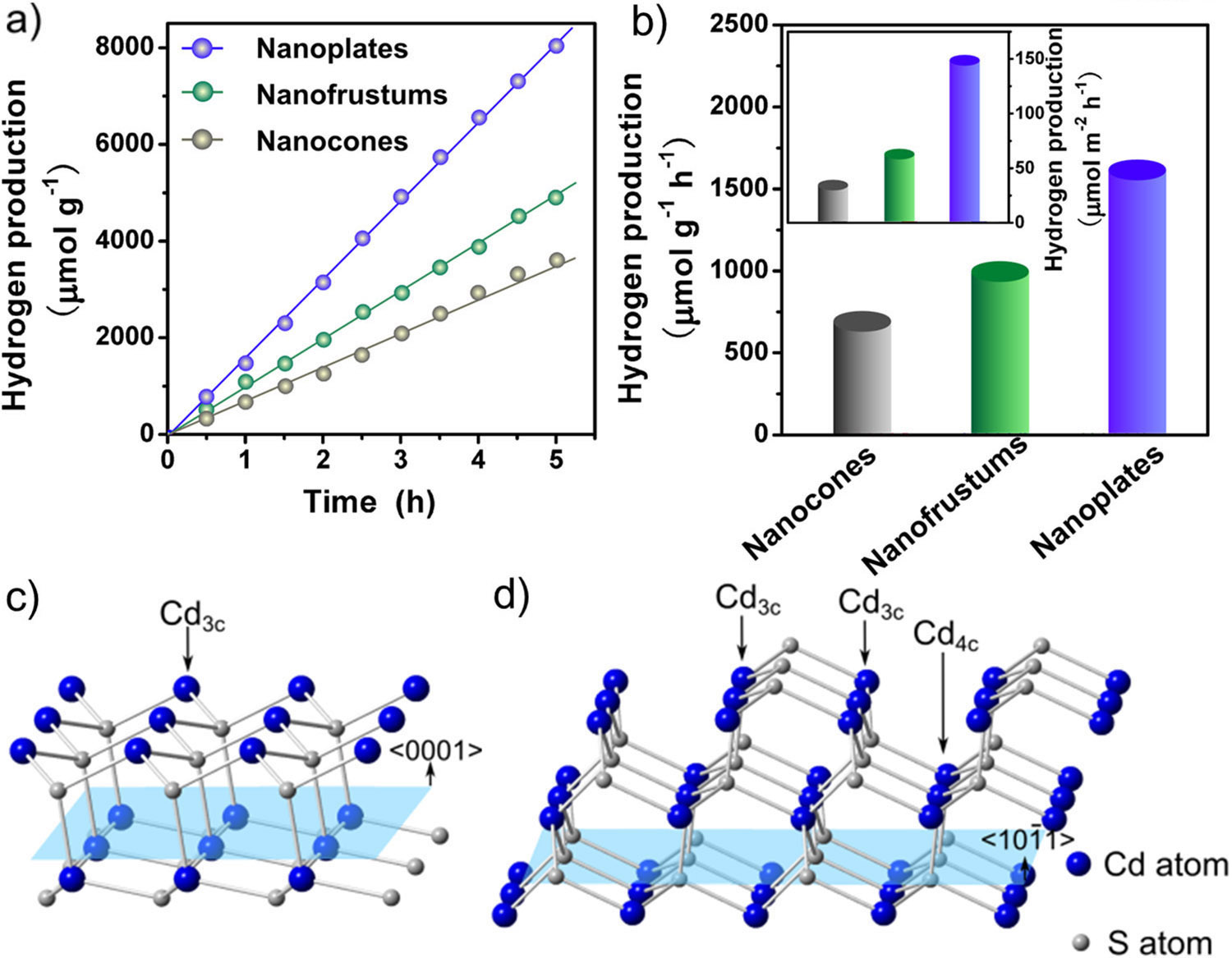 In summary, we have developed a simple method of controlling the growth of photocatalytic CdS nanocrystals. By varying the rate of precursor ion addition, we can produce three different crystal forms: nanocones, nanofrustums, and nanoplates. Water splitting reactions with these three photocatalysts showed that nanoplates have the highest activity, likely a result of the presence of primarily {0001} facets on the crystal surface. This work provides new understanding of the controlled growth of nanocrystals, and opens up a wealth of opportunities for the targeted synthesis of semiconductor photocatalysts with high activity and stability. Our future work in this area will include generalizing this methodology for the synthesis of other semiconductor nanocrystals, such as titanium dioxide and bismuth vanadate, and optimizing their photocatalytic performance by investigating their facet-dependent properties.

Maochang Liu received his PhD in 2014 from XJTU, where he is now an assistant professor. His research interests include solar energy use, hydrogen production, and particle fluids.

Xixi Wang is a PhD candidate at XJTU. His primary research interest is solar hydrogen production.