Visible emitting LEDs based on gallium nitride (GaN) materials have made tremendous progress since their initial development in the early 1990s. Indeed, these LEDs are now in everyday use in many applications, e.g., for solid state lighting, and for backlighting in televisions and smartphones. LED technology, however, also has several inherent problems. These include decreasing efficiency under high injection current (droop), color change with increasing current, and poor efficiency in the green and yellow parts of the spectrum. These problems are associated with the natural polar (0001) crystal plane of wurtzite GaN, on which commercial LEDs are based, with the use of ‘c-plane’ sapphire substrates.

Many modifications to the design of LEDs have been proposed to resolve these issues,1, 2 but with only limited success. In a more radical approach, different crystal planes of GaN, both semipolar and non-polar,3 have been used for the growth of the LEDs. The best results have been obtained on substrates that are cut at the appropriate angle from thick, freestanding (0001) GaN crystals. These substrates, however, are small in area and very expensive, which hinders their widespread uptake.

In our work—as part of a collaborative project funded by the European Union4—we have taken a new scalable approach to producing low-defect semipolar GaN templates for the growth of LEDs. In our technique we fabricate these large-area semipolar templates on low-cost, ‘r-plane’ sapphire substrates. We have thus developed a process for the production of 4-inch-diameter wafers (see Figure 1) with the semipolar

surfaces (because of the advantageous properties of this particular plane).5 The process was informed by calculations of the atomic-scale growth mechanisms on the semipolar surface. 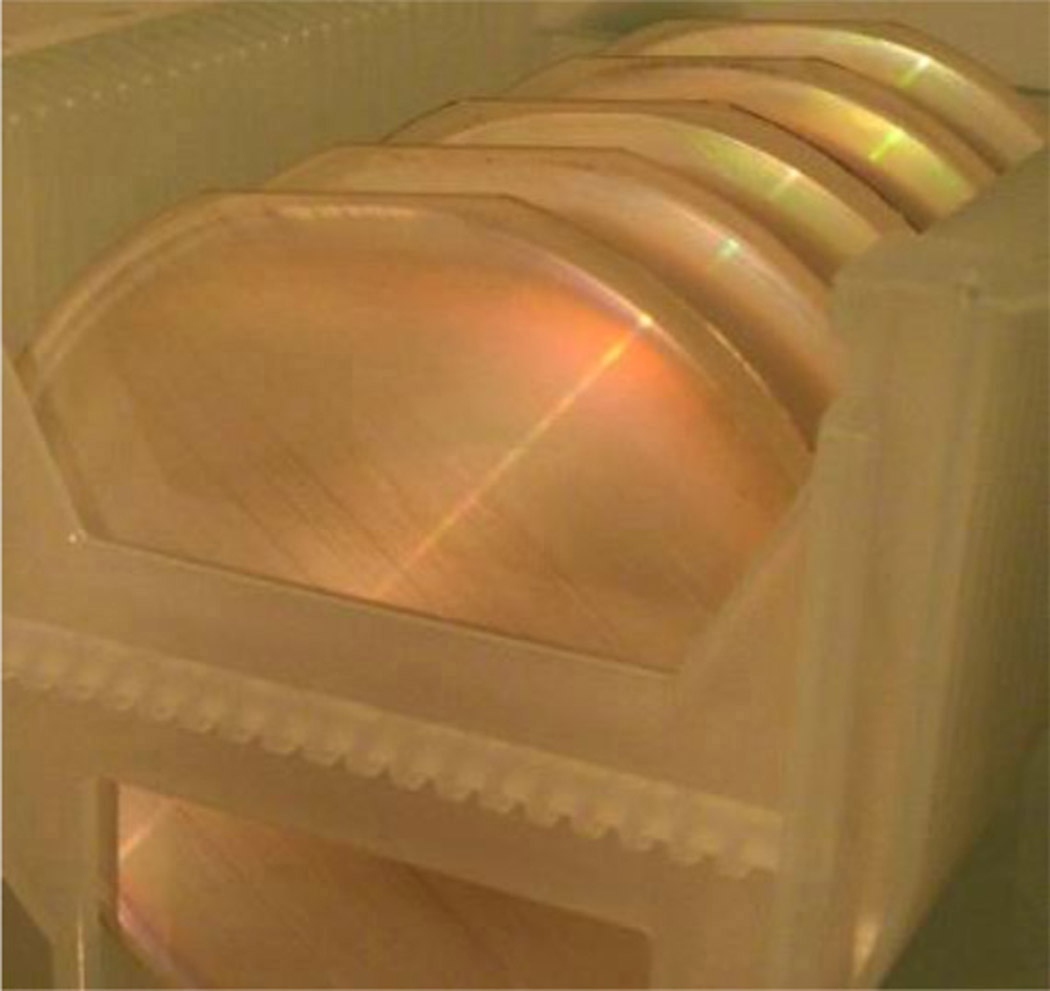 To grow the GaN, we performed metal-organic vapor phase epitaxy on our sapphire wafers that had been structured with arrays of linear trenches (spaced by a few micrometers and etched to a depth of about 1μm). We initiated this growth on the (0001)-oriented sidewalls of the trenches and proceeded to an angle of 58° to the surface. After this point, the stripes coalesced to form the

plane and the growth of several micrometers of GaN followed. We took special care during the overgrowth to ensure that the basal-plane stacking-fault density was drastically reduced to less than 5 × 103cm−1.6 In addition, our transmission electron microscopy characterizations showed that a silicon nitride interlayer was very effective at bending threading dislocations. These dislocations were thus prevented from propagating to the upper surface.7 As a result, it may be possible to obtain low-defect-density (2–3 × 108cm−2) templates on a multi-wafer reactor.8 In our experiments, we also used hydride vapor phase epitaxy to increase the thickness of the GaN to more than 50μm (up to 1mm). Although the defect density decreased further, we found that hillock formation caused roughening of the surface.

To prepare our templates for subsequent growth of LED structures, we conducted chemical mechanical polishing. For this process, we grew a connecting n-type GaN layer and an indium GaN quantum well region. A key challenge, however, was to obtain a high level of p-type doping (because the incorporation of magnesium on this type of plane is low and can be partly compensated by oxygen impurities). Nevertheless, we achieved a good ohmic contact with nickel-silver-gold metallization. The grooved attachment of GaN to the sapphire substrate allows it to be removed via laser lift-off. It can thus be used to create free-standing semipolar LEDs.5 The grooves can be left in place to enhance the light extraction, or they can be polished away.

The LEDs that we have produced emit across the visible spectrum. In particular, devices in which we use a single quantum well, with thicknesses of 6–8nm, were very robust. They exhibit stable emission, with good linearity in the output power, to current densities of more than 1kA/cm2. These devices also emit partially polarized light, which can lead to greater efficiency in backlighting applications. Furthermore, we have demonstrated that the LEDs have a very high elecro-optic bandwidth, e.g., we obtained a 3dB bandwidth of up to 500MHz for the large area devices (see Figure 2).8 Such devices should thus be very useful in the development of ‘LiFi’ data communications, as a complement to ‘WiFi.’

Figure 2. Left: Photograph of a packaged

LED. Right: The magnitude of the 3dB bandwidth of blue and green

LEDs, as a function of bias current.

In summary, we have demonstrated a new scalable approach for the production of low-defect-density semipolar GaN templates. LEDs grown and fabricated on these templates exhibit very promising performance (e.g., freestanding LEDs with large bandwidths), especially considering their early stage of development. In the next steps of our research, we will aim to further reduce the defect density of our devices. We also expect that we can improve the overall efficiency of the

LEDs by lowering the incorporation of oxygen in the quantum well region.9 In addition to the next generation of LEDS, our templates may be useful for sensing and electronic devices.

Brian Corbett is head of the III-V Materials and Devices group and was the coordinator of the AlGaInN materials on semipolar templates for yellow emission in solid state lighting applications (ALIGHT) project.