Photoelectrochemical water splitting, where irradiation of a photoelectrode in water produces hydrogen and oxygen, can be used for solar energy harvesting and conversion.1 The process potentially offers a clean, sustainable, and large-scale energy resource. Photoanodes used in the photoelectrochemical process are generally made from Earth-abundant oxide semiconductors, such as titanium dioxide, tungsten trioxide, and iron (III) oxide.2 Among these metal oxide semiconductors, tungsten trioxide is regarded as one of the best candidates because of its visible light-driven photocatalytic activity, its good charge transport properties, and its relative stability in aqueous electrolytes. However, the light absorption and charge collection efficiency of tungsten trioxide—especially within a bulk structure—still needs to be improved to realize practical photoelectrochemical applications.

To further improve the transport efficiency of tungsten trioxide (and other semiconductors), low-dimensional structures have specifically been identified as offering direct electrical pathways for photogenerated carriers.3 These structures feature reduced grain boundaries that enable superior charge transport efficiency. The synthesis of low-dimensional semiconductor nanoarchitectures by low-cost synthetic procedures (e.g., a hydrothermal approach) is therefore a promising method for future large-scale implementation of photoelectrochemical water splitting and clean energy production. In particular, the morphologies and structures of catalysts are important parameters in photoelectrochemical applications. Tungsten trioxide thin films with various morphologies have previously been reported, and are widely used in electrochromic, field-emission, gas-sensing, and photoelectrochemical water-splitting devices.4

In our recent work we have therefore focused on hydrothermal synthesis of low-dimensional tungsten trioxide nanostructures for photoelectrochemical applications. We have developed a simple method for the deposition of ordered arrays of tungsten trioxide nanowires and nanoflakes on fluorine-doped tin oxide (FTO)-coated glass (see Figure 1). In this approach, we use a solvothermal technique, which involves the crystallization of a solution at high temperature and pressure.5 To demonstrate this technique, we used a tungsten trioxide seed layer to initiate growth and we tailored the geometries by adjusting the composition of the hydrothermal precursor. We can grow hexagonal tungsten trioxide nanowire and monoclinic nanoflake arrays in the [001] or [010] crystallographic directions, and we can tailor the wires and arrays by adjusting the solution composition. After the annealing process, we found that the samples exhibited further reductions in their band gaps, which improved the photocurrents significantly. We attribute this change in electronic band gap to the distortion of the tungsten trioxide crystal structure's octahedral building blocks, which occurs during annealing. Our solvothermal film growth technique is thus an exciting development for the fabrication of 1D metal oxide nanostructures that may enable practical applications in photoelectrochemical energy conversion.

Figure 1. Arrays of tungsten trioxide nanorods (left) and nanoflakes (right) that were grown on fluorine-doped tin oxide-coated glass, through the use of a solvothermal technique. [001], [010]: Crytallographic directions of growth. 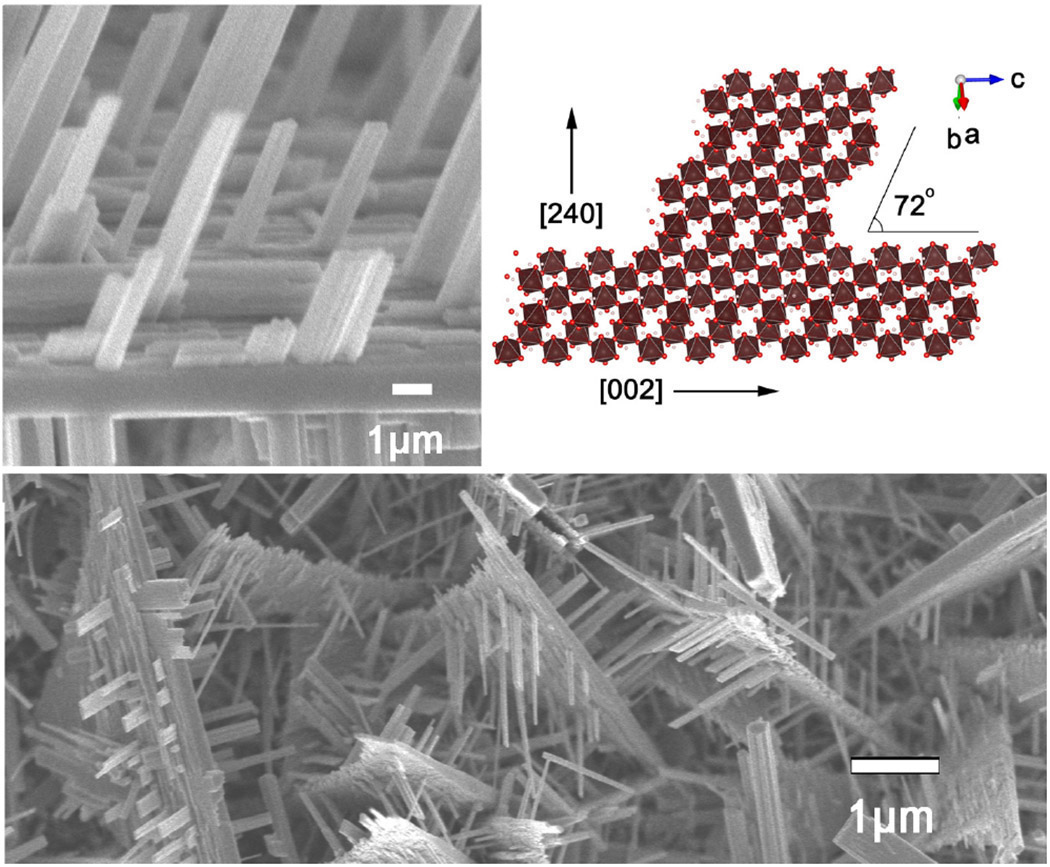 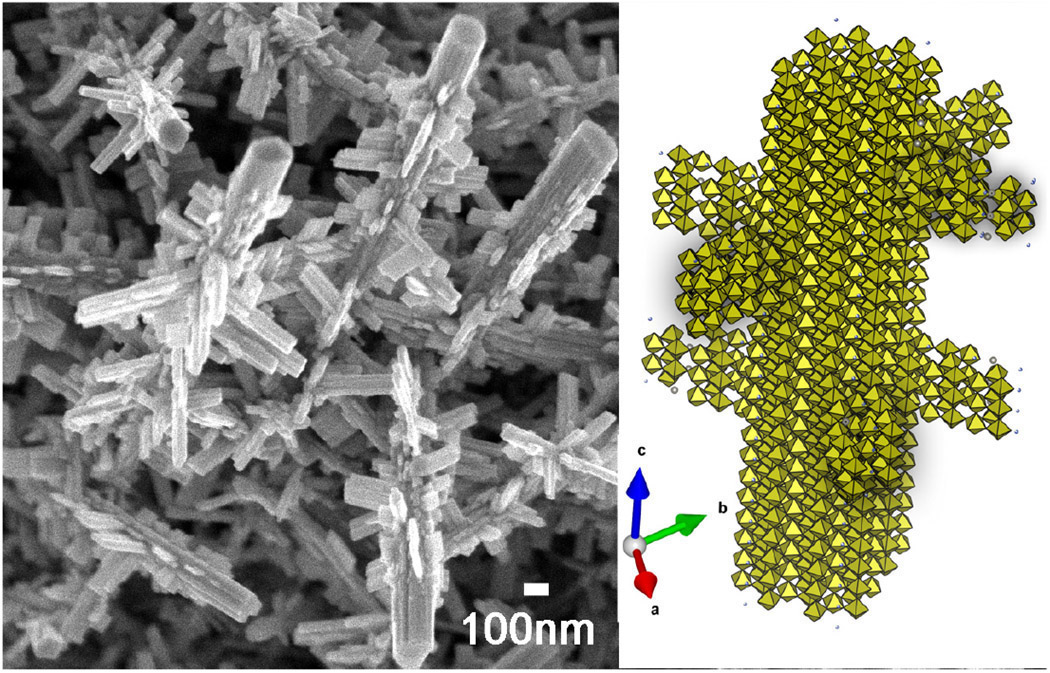 Despite the advantages of our 1D structure, its specific surface area is insufficient to enable a practical water splitting reaction (which can be achieved with mesoporous films). The ideal model for our 1D structure is a hierarchically branched nanorod architecture that simultaneously offers a large semiconductor/electrolyte contact, excellent light-trapping characteristics, and a highly conductive pathway for charge carrier collection. To meet those specifications, we therefore used our solvothermal technique to develop a well-defined branched tungsten trioxide nanowire array.7 We grew branched ammonium tungsten bronze nanorods, without crystal boundaries between the trunk and branch, on an FTO substrate. We then converted the branched ammonium tungsten bronze nanorods by annealing at 500°C in nitrogen, in air, and in nitrogen followed by air. The samples we obtained from nitrogen-calcination preserved the original morphology of the pristine branched nanorods, but they showed poor photoactivity because of the existence of the ammonium cation (NH4+). When we conducted further annealing of the nitrogen-annealed sample in an oxidizing atmosphere to remove the remnant NH4+, branched tungsten trioxide nanorods with improved photocurrent were produced. Direct calcination in air, however, caused deformation and collapse of the branched structure.

During growth, we found that capping agents were crucial to the morphology of the synthesized nanorods. In general, we used the additional ions in the precursor as a capping or structure-directing agent. We found that oxalate ions (−OOC-COO−or -COO−) facilitated the growth of ammonium tungsten bronze flat sticks as branches from the surface of the trunk. Furthermore, NH4+ served as an ammonium source for the formation of ammonium tungsten bronze and it acted as a capping ion in the formation of the 1D nanorod morphology.

In conclusion, we have designed and successfully fabricated several tungsten trioxide nanostructure morphologies. On the basis of these well-defined low-dimensional nanostructures, it is possible to construct high-performance heterojunctions or quantum dot-sensitized devices for applications in solar energy harvesting and conversion. In our future work, we plan to develop further novel tungsten trioxide nanostructures, and to investigate and optimize their electron transport dynamics. With our new understanding, we will seek to facilitate applications of these nanostructures in efficient solar energy conversion systems.

Jinzhan Su received his PhD in 2011 and was then appointed as an assistant professor. His research interests focus on the synthesis, assembly, and charge dynamics of nanostructural semiconductors for solar energy conversion applications.