Unified characterization of imaging sensors from visible through longwave IR

Modern reconnaissance strategies are based on gathering information from sensors that operate in several spectral bands. Besides the well-known atmospheric windows at the visible (VIS), medium-wave IR, and longwave-IR (LWIR) wavelengths, today's detectors can also operate in the 1–1.7μm window known as shortwave IR (SWIR). SWIR cameras are especially useful in the hazy or misty atmospheric conditions typical of a maritime environment. For optimum application of SWIR cameras, as well as detectors in other bands, it would be useful to have a single, uniform method of characterizing the various sensors.

One way to provide such characterization is to use minimum resolvable contrast (MRC) measurements. MRC is a measure of a system's sensitivity and its ability to resolve data. It was pioneered by John Johnson in the late 1950s when he first described the probability of detecting an object as dependent on the object's effective resolution.1 This intuitive idea showed that the probability of locating a target increases with the number of resolvable cycles across that target. Johnson's analysis was initially used to assist the design of image intensifier tubes, which increase the intensity of light in optical systems where there is limited light available. Later—with the growing importance of day sight (surveillance) cameras—Johnson's work was revived by developers who used MRC measurements to assess electro- optical systems. SWIR imaging makes use of the radiation reflected by observed objects in the same way that visible imaging does. It is therefore possible to use MRC methods to characterize SWIR imaging.2

We have employed MRC measurements to determine the ability of a camera system to resolve detail contrast in the visible spectrum in relation to range and luminance.

The system (optics, detector, electronics, display, and the observer's eye) captures a collimated USAF 1951 resolution test chart in front of an adjustable light source (see Figure 1). The USAF target is a widely accepted test pattern created by the US Air Force, and consists of groups of three bars with different dimensions, from large to small. The imager's resolving power is defined as the largest bar in the pattern that it cannot discern. We used a sequence of USAF targets—which had different contrast values in the bar pattern structure—to establish an MRC curve as a function of spatial frequency. We input the recorded values into visual range model (VRM) software,3 which calculated the ranges of the camera system. The output is presented as a graph that shows contrast to spatial frequency at a given luminance. 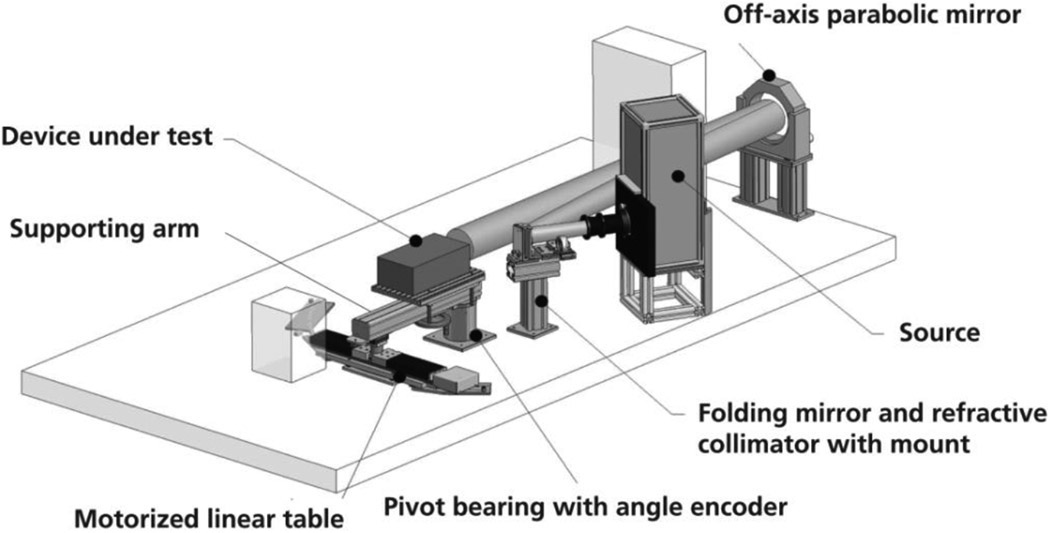 Figure 1. Setup used for measuring minimum resolvable contrast (MRC).3The targets are mounted in front of a light source with specified luminance. The outcoming light is collimated by a parabolic mirror and directed into the aperture of the camera under test. The camera is fixed on a rotatable arm to allow measurements under different angles of incidence.

To take experimental MRC measurements, we used a light bulb with a temperature of 3000K as the visible light source. This temperature is considerably lower than that of our key visible light source—the Sun—which radiates with a source temperature of 5777K and emits a different spectrum (see Figure 2). Thus, to compare the amount of light in the VIS band with that in the SWIR and near-IR (NIR) bands, we evaluated correction factors for NIR and SWIR from the calculated integrals of the light distribution in the corresponding bands. We realized our measurements using the patterns taken by two different cameras (see Table 1). The first camera had one HD color sensor with a switchable optical filter, which enables VIS and NIR imaging. The second realizes simultaneous imaging on two image sensors, and thus enables recording of VIS and SWIR images. The results of the MRC values are shown in Figure 3.4 We used these values to make a range of calculations in VRM3 for a maritime atmosphere. The achievable ranges are shown in Figure 4. 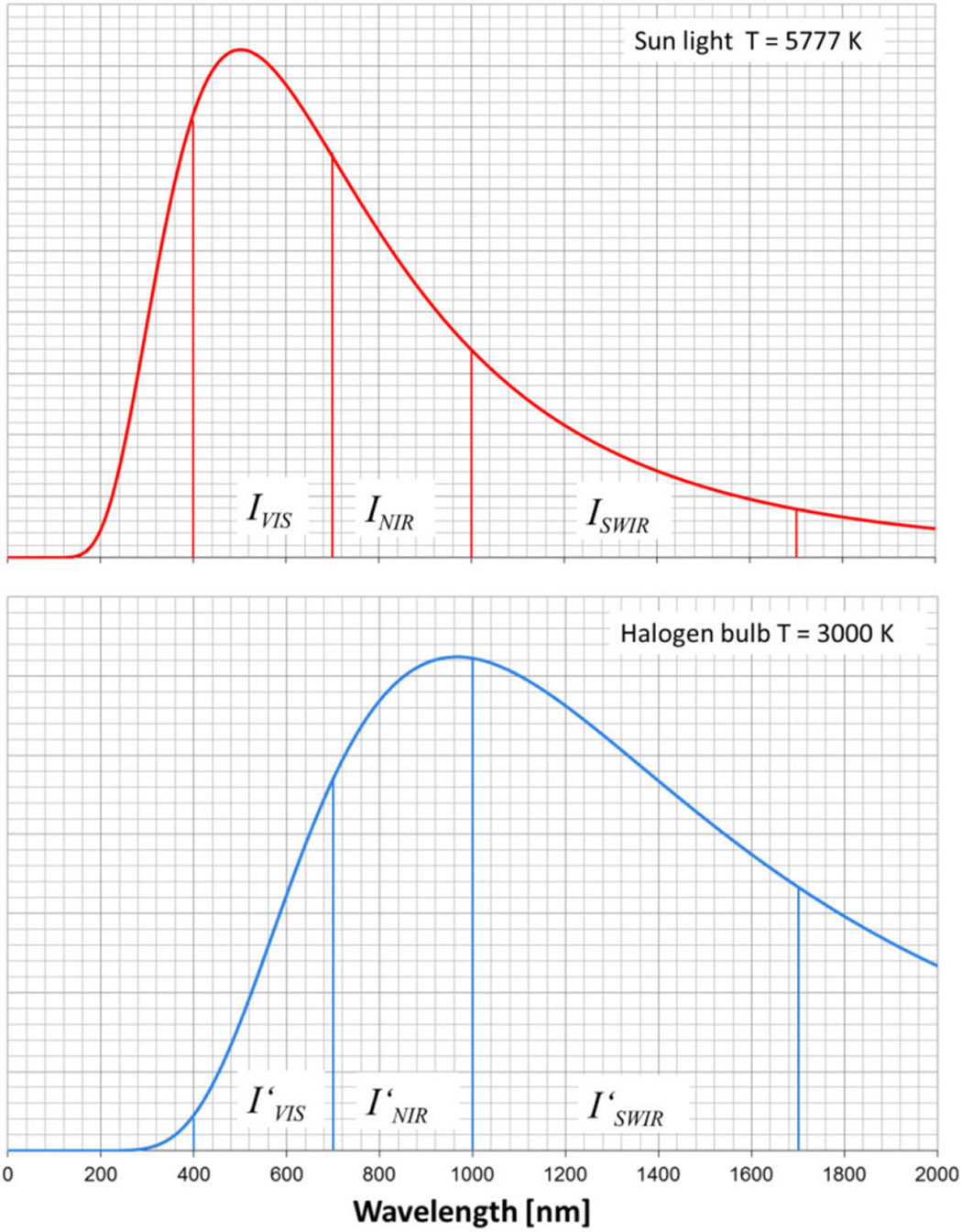 Figure 2. Relative spectral emittance (I) in the visible (VIS), near-IR (NIR), and shortwave IR (SWIR) wavelength bands in sunlight and under a halogen bulb.
Table 1.Technical data of a combined VIS-IR and VIS-SWIR camera. 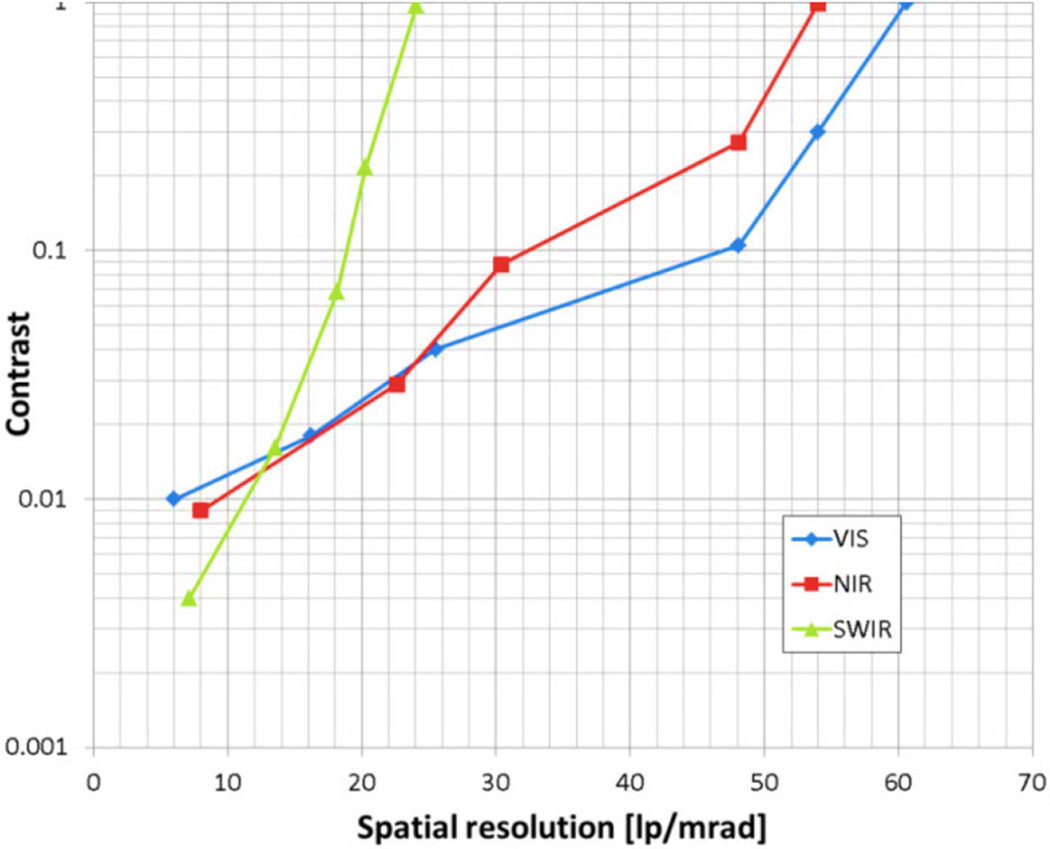 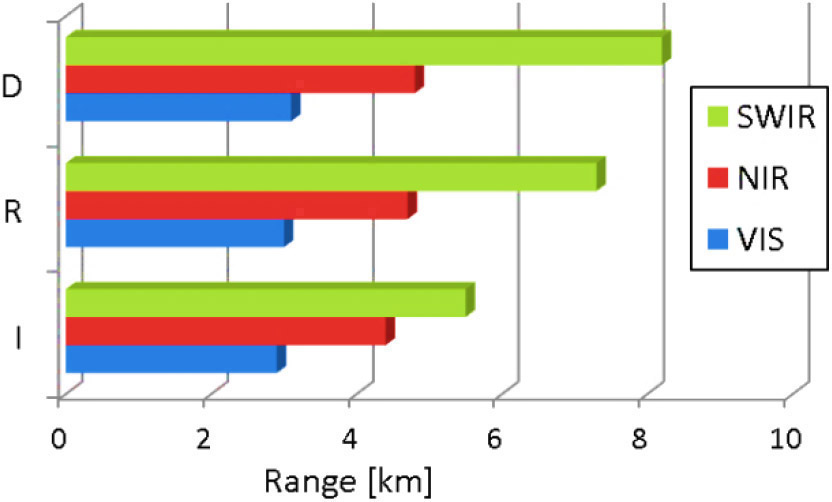 Figure 4. Calculated ranges for detection (D), recognition (R), and identification (I) in the VIS, NIR, and SWIR wavelengths based on the measured MRC data from Table 1.

In summary, we have described a single approach based on MRC measurements to characterize the performance of imaging sensors in the VIS, NIR, and SWIR spectral ranges. We demonstrated measurement of MRC for all three types of sensors, showing that this approach has potential for use in real-world devices. Our method would enable a reliable base from which to make a range of calculations under all kinds of atmospheric conditions. In future work, we will apply MRC methods to assess commercial camera devices and to create consistent assessment parameters for multi-camera observation platforms, such as those in submarines and tank periscopes.

Martin Gerken is a project manager who holds responsibility for the development of a day sight zoom camera for operation in spectral ranges from VIS to SWIR. He holds a doctor's degree in nuclear physics with synchrotron radiation from the University of Hamburg.

Harry Schlemmer obtained a diploma in physics from the Technical University of Hannover in 1978, and completed a PhD thesis on investigations of two-photon amplification in coupled laser systems. He was group manager for spectral analysis at Carl Zeiss, Oberkochen, from 1981 until 1992, and was later manager of the optical technology research and development department. Since 2008 he has been principal scientist for optical technology and systems design at Airbus DS Optronics.

Mario Münzberg is director of the Imaging Devices Department, where he is responsible for the cross-functional development of all imaging modules and devices that are sensitive in the VIS, near-IR, SWIR, and IR spectral bands. He holds a doctor's degree in physics from the Institute of Applied Physics in Erlangen, Germany.