The development of cost-effective high-performance solar cells is required to achieve grid parity with fossil fuels. Over the past decade, thin-film cadmium telluride (CdTe) photovoltaic cells have emerged as potential competitors to cells based on multi-crystalline silicon, owing to their advantages in cost-effective manufacturing and an increase in efficiency to as high as 22%.1 However, theoretical calculations indicate that an efficiency of 24–25% can be achieved in CdTe solar cells without innovations in either the cell structure or the manufacturing process.2, 3

The limitations in doping via treatment with cadmium chloride are believed to be caused by compensation effects in defect chemistry. A chlorine atom is supposed to substitute a tellurium atom in CdTe and act as a donor. However, when a significant number of cadmium vacancies are present, a chlorine substituent can form a defect complex with a cadmium vacancy. This complex is a shallow acceptor. The amount of these defect complexes should be significantly higher than the amount of chlorine substituents to make CdTe a good p-type semiconductor. However, adding more chlorine increases the chances of creating both defects, which leads to a certain degree of cancelation. As a result, the highest experimentally achieved acceptor density seems to be in the range of 1014–1015cm−3.

In a departure from the standard process, we used phosphorus as an alternative dopant. In this case, phosphorus atoms substitute tellurium atoms and act as acceptors. However, a phosphorus atom can also form a compensating defect at a cadmium site or another defect complex with a cadmium vacancy. Both these defects are donors and can neutralize the effect of doping. Adding a large amount of phosphorus to the charge materials during crystal growth may lead to the formation of dopant clusters, which do not contribute to the effects of doping. Controlling the amount and stoichiometry of phosphorus during crystal growth, such as producing non-stoichiometric cadmium-rich or tellurium-rich conditions, is critical in obtaining high-quality CdTe with a high acceptor density and long minority carrier lifetimes.

As a result, in a recent collaboration with the National Renewable Energy Laboratory and the University of Tennessee, we demonstrated CdTe solar cells with an open-circuit voltage in excess of 1V using single crystals of CdTe doped with phosphorus (see Figure 1).5 With careful control of the conditions during growth and post-processing, the acceptor density in the phosphorus-doped crystals was successfully increased to the necessary range of 1016–1017cm−3 and the minority carrier lifetime varied between 50 and 400ns. These values resulted in the predicted high open-circuit voltage and are comparable to those of gallium arsenide, which is known to be the best commercially available material for solar cells (see Figure 2).5 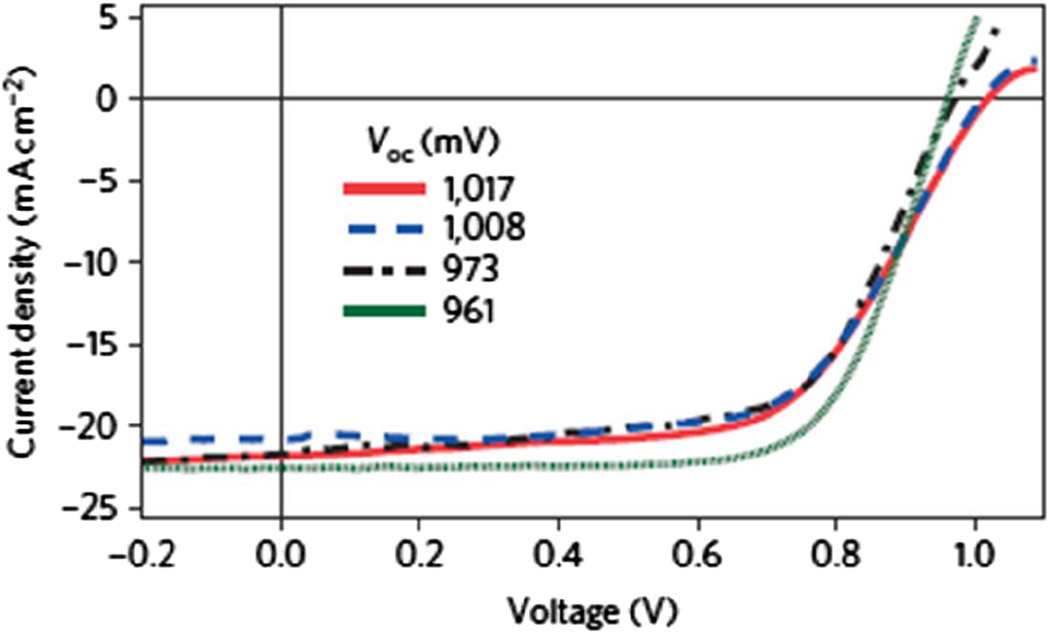 Figure 1. Curves of current density against voltage for solar cells fabricated from phosphorus-doped cadmium telluride (CdTe) show an open-circuit voltage (Voc) of greater than 1V can be achieved. 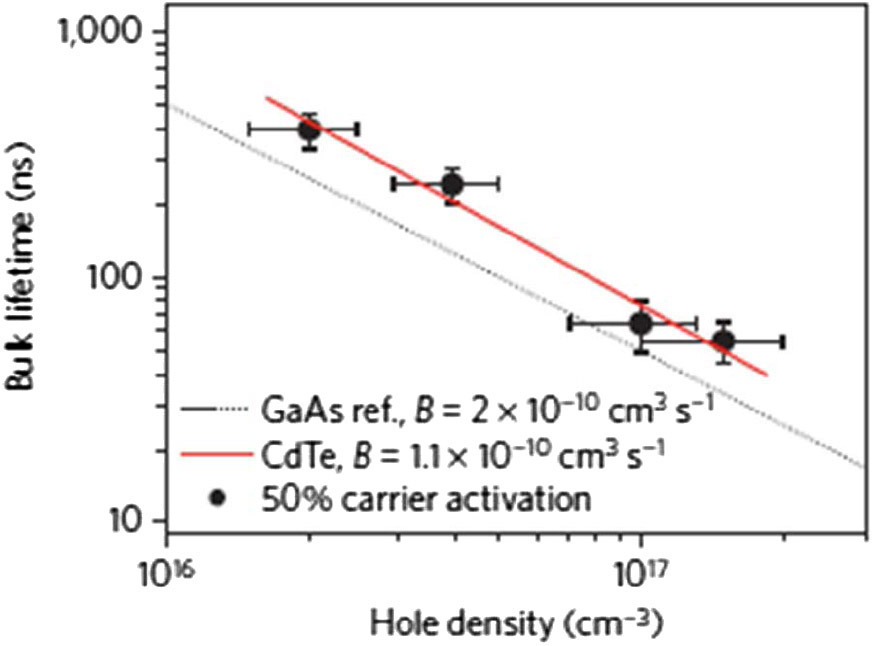 Our solar cells, which achieved an open-circuit voltage in excess of 1V, used bulk wafers of single CdTe crystals with a thickness of 0.8mm as a proof of concept. To scale up our design with the aim of enabling commercial manufacturing, our future research will investigate the potential use of thin films using phosphorus-doped crystals as feedstocks for deposition.

Kelvin Lynn is regents professor in the School of Mechanical and Materials Engineering at Washington State University. His recent work has involved the growth and characterization of semiconductors and oxides, with an emphasis on thin-film solar cells. His specialties include growth and defects in semiconductors, photovoltaic materials, and thermally stimulated spectroscopy.

Tursun Ablekim obtained his PhD in materials science and engineering in 2015 from Washington State University. His specialties include thin-film solar cells, device physics, and the characterization of defects in semiconductors by thermoelectric effect spectroscopy.

Santosh Swain has research interests in the growth of high-purity semiconductor materials and their applications.