Photocatalytic hydrogen generation from water over semiconductors is a promising route for the conversion and storage of solar energy, and this methodology has thus been widely studied over the past few decades.1 In a typical process, semiconductor photocatalysts absorb the incident light to generate electrons and holes that are separated and transferred to the surface of the photocatalysts. The photoexcited electrons reduce hydrogen ions to produce hydrogen gas. In addition, the photoexcited holes oxidize hydroxide ions to generate oxygen gas, or they react with sacrificial reagents (e.g., sulfur or sulfite ions). Most semiconductor photocatalysts, however, have poor activity because of rapid charge recombination.

Coupling semiconductors that have different energy levels to form heterostructures has been demonstrated as a suitable way to achieve effective charge separation.2 In this approach, the basic requirement for obtaining the improved properties is the formation of a high-quality heterojunction. Generally, such heterostructured photocatalysts are prepared via a two-step method.3 In the first step, one component is initially prepared and is subsequently coupled to the other component by using a physical or chemical treatment. This technique, however, can cause large amounts of individual components to aggregate and thus leads to reduced contacts between the two phases.4 The contact between the phases may also be loose because the individual components are synthesized separately. Such poor contacts are detrimental to the charge separation.

In our work, we have therefore introduced a simple ‘one-pot’ method for the synthesis of hybrid photocatalysts.5–7 In this approach, two phases are intergrown with each other. In this way, our technique can provide strong coupling between the different components, as well as favorable physicochemical properties. Indeed, we have found that our heterostructured photocatalysts—which display the intergrowth effect from our one-pot synthesis process—exhibit enhanced solar hydrogen generation compared with photocatalysts prepared using the more common two-step method.5–7

In the first use of our simple one-step hydrothermal methodology, we synthesized novel cadmium sulfide/titanate nanotube (CdS/TNT) photocatalysts with a unique morphology.5 Compared with traditional CdS/TNT nanocomposite photocatalysts prepared via the normal two-step method, our CdS/TNTs exhibited a much higher activity for photocatalytic hydrogen evolution under visible light irradiation. Transmission electron microscopy (TEM) revealed that our intergrowth process had caused the CdS nanoparticles to be intimately enwrapped by the surrounding TNTs. This unique architecture resulted in the appropriate dispersion of CdS nanoparticles. It also gave rise to the intimate, multipoint contacts between the CdS nanoparticles and TNTs that led to a significant enhancement in charge separation in the CdS/TNTs (see Figure 1) and an associated improvement in photoactivity. Furthermore, we conducted x-ray powder diffraction measurements, with which we demonstrated that highly crystalline hexagonal CdS was obtained in the CdS/TNTs. This crystallinity was also essential for achieving the enhanced photocatalytic performance. The unique morphology and photocatalytic activity of our CdS/TNTs are influenced by the cadmium/titanium molar ratio. We find that an optimal value for this ratio is 0.05. With this condition, the CdS makes up only 6wt% of the total photocatalyst, which is important from an environmental perspective. In addition, we have also investigated the influence of loaded platinum on the activity of the CdS/TNTs. Our results indicate that with a loading content of 2wt%, the hydrogen production rate of platinum-modified CdS/TNTs reached 353.4μmol/hour (with an apparent quantum yield of 25.5% at 420nm). 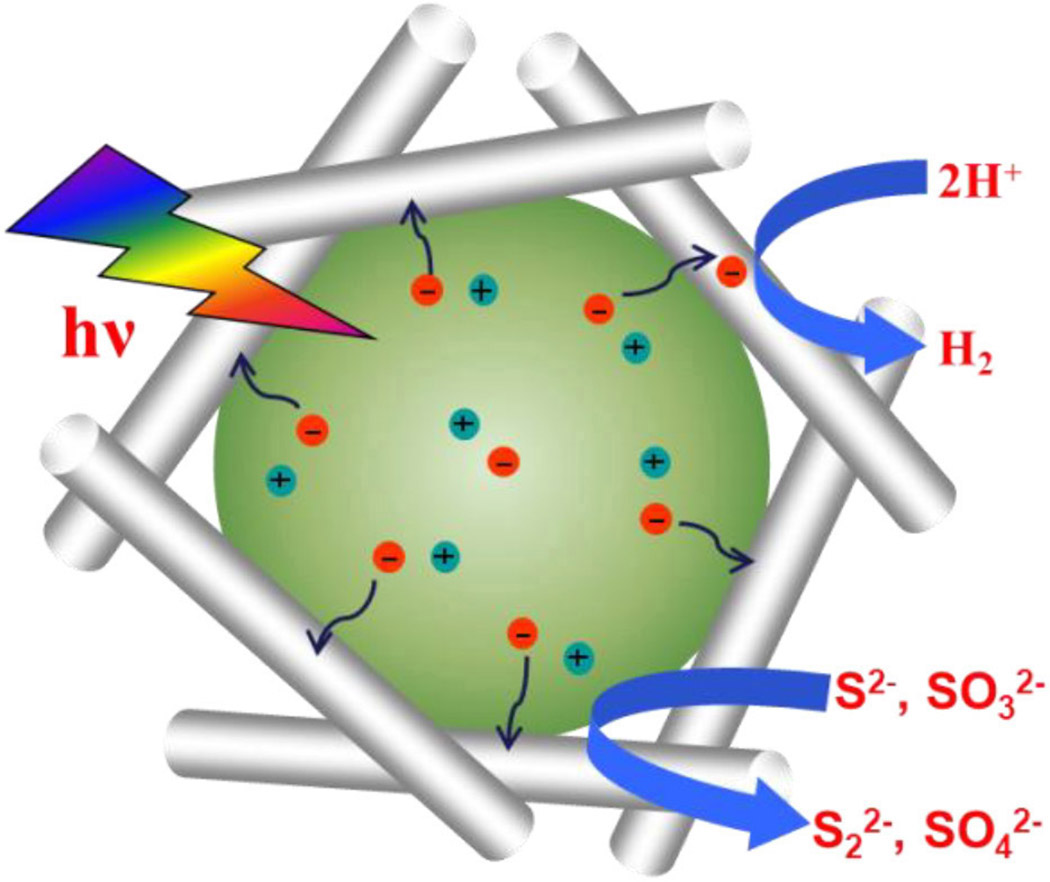 On the basis of all these results, we have demonstrated that the intergrowth of CdS with a metal oxide is an effective way to improve photocatalytic activity and stability. We also note that co-catalysts play a vital role in improving photocatalytic hydrogen generation. It is thus essential to maintain delicate control of the physicochemical properties of co-catalysts and to systematically optimize the coupling between the co-catalysts and the host photocatalysts. In more recent work,7 we thus adapted our simple one-step hydrothermal method for the synthesis of noble-metal-free photocatalysts—nickel sulfide/cadmium sulfide (NiSx/CdS) photocatalysts—for the first time (we denote our nickel sulfide as NiSx as it was prepared as a mixture of NiS and Ni3S4). We conducted time-dependent growth studies that revealed the NiSx co-catalysts and CdS host photocatalysts were intergrown with each other in our one-step hydrothermal process. Compared with NiSx/CdS photocatalysts prepared by a two-step method, our intergrown examples displayed close contact between the NiSx and CdS, as well as smaller sizes and better dispersion of NiSx nanoparticles (see Figure 2). These specific characteristics of the NiSx/CdS resulted in efficient charge separation and rapid surface reaction. These, in turn, gave rise to significantly improved photocatalytic activity, with an apparent quantum efficiency as high as 60.4% at 420nm. To the best of our knowledge, this value is the highest efficiency for NiSx-modified CdS photocatalysts that has yet been achieved and is among the best values for visible-light-driven photocatalysts. In addition to the heterojunction structure, in our latest study we have shown that the intergrowth of a rationally designed homojunction structure may also produce enhanced photocatalytic activity.8 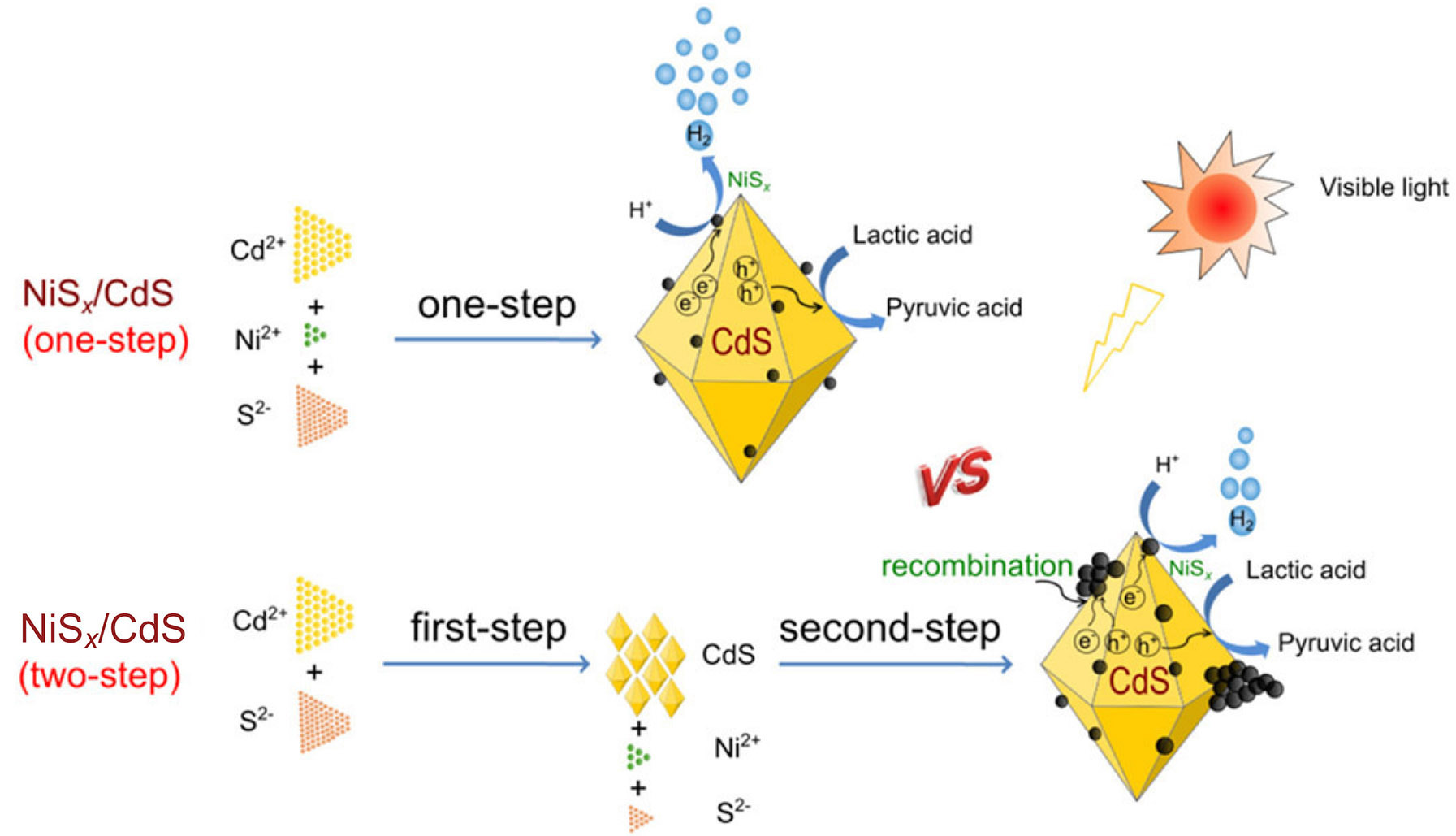 In summary, we have developed a simple one-step synthesis route for the preparation of heterostructured photocatalysts that leads to the intergrowth of different components. This intergrowth effect can cause strong coupling between the different components, as well as favorable physicochemical properties. Our intergrown photocatalysts exhibit solar hydrogen generation superior to that of photocatalysts prepared with the use of a more common two-step method. In our future work, we hope to elucidate the coupling principle for our intergrown semiconductors and the electronic states at the interface. This work will help us to build efficient heterostructured systems for solar hydrogen generation.

Yubin Chen received his PhD from Xi'an Jiaotong University in 2013. Between 2011 and 2012 he worked as a visiting scholar at Case Western Reserve University. He is currently a lecturer, with research that focuses on photocatalytic and photoelectrochemical water splitting.