Random numbers are of central importance in secure communication links, computational experiments, and data encryption. Naturally, the best password for use in a communication channel would be made up of a sequence of randomly generated characters. Although pseudo-random bits have been developed and widely applied in digital technologies, better security could be ensured via the use of truly random bits that are generated from physical devices. In view of the ever-growing bit rates in communication systems, a high generation speed is also desirable.

One interesting approach that has been developed to enable fast physical random bit generation (RBG) is based on chaotic semiconductor lasers.1 Chaotic waveforms attract particular attention because they are broadband, noiselike, synchronizable, and high dimensional.2 Various configurations have been used to induce chaos in semiconductor lasers for RBG.3 One of the simplest among these employs external optical feedback from a mirror to invoke a range of rich and fascinating nonlinear dynamical behaviors.4, 5 However, external feedback forces the laser-emission waveform to partially repeat. As a result of this, the autocorrelation function of the emission contains a small peak (the time-delay signature, TDS).6 The TDS also implies partially repeating output bit patterns and therefore inevitably poses challenges for RBG, and limits continuous bit-rate tunability.

To achieve TDS suppression for RBG, we propose the adoption of a fiber Bragg grating (FBG) as the only reflector to a semiconductor laser.7–10 Our approach uses the FBG as a distributed reflector in place of a single mirror (see Figure 1). This replacement spreads the round-trip feedback delay time, thereby suppressing the TDS. Compared to other approaches, ours is relatively simple as it does not require extra lasers or external modulators. Additionally, as a result of the chromatic dispersion introduced by the grating, this setup also effectively suppresses the TDS. Our experimental results show that our approach reduces the TDS by roughly one order of magnitude.8 These results confirm numerical predictions that we made based on the rate-equation model.7 We also experimentally investigated RBG at continuously tunable rates10 and verified the randomness of the resultant signal via the standard tests set forth by the National Institute of Standards and Technology. Our results show that we have achieved an overall output bit rate that is tunable across three orders of magnitude and up to 100Gb/s without sacrificing the quality of the randomness.

Figure 1 shows the schematic of our RBG based on FBG feedback.7, 8,10 The light from a single-mode semiconductor laser passes through a single-mode fiber with an FBG that was written to provide distributed feedback. The first reflection from the grating has a round-trip delay time (τRT) attributable to the fiber length. Depending on the feedback parameters, the feedback can perturb the laser into chaos. These parameters are the feedback strength, as controlled by the fiber-laser coupling, and the grating detuning frequency, which is defined by the offset of the Bragg resonance from the free-running frequency of the laser. The fluctuating intensity emitted from the laser is digitized by a photodetector that is associated with an analog-to-digital converter (ADC). The ADC, which operates at a sampling period τs, generates digital signals in multiple channels for further processing into the final output.10

A dynamic map of the feedback parameter space is shown numerically in Figure 2. We conducted these simulations based on both the rate equations of the laser and the impulse response of the grating,7, 8 and used realistic parameters that were previously extracted from a commercial laser. The mapping, which focuses on the intensity dynamics, shows regions of stable, period-one oscillatory, period-doubled oscillatory, quasi-periodic pulsating, and chaotic states. The map shows a quasi-periodic route to chaos, and two large regions of chaos. These regions are readily applicable to TDS-suppressed RBG. 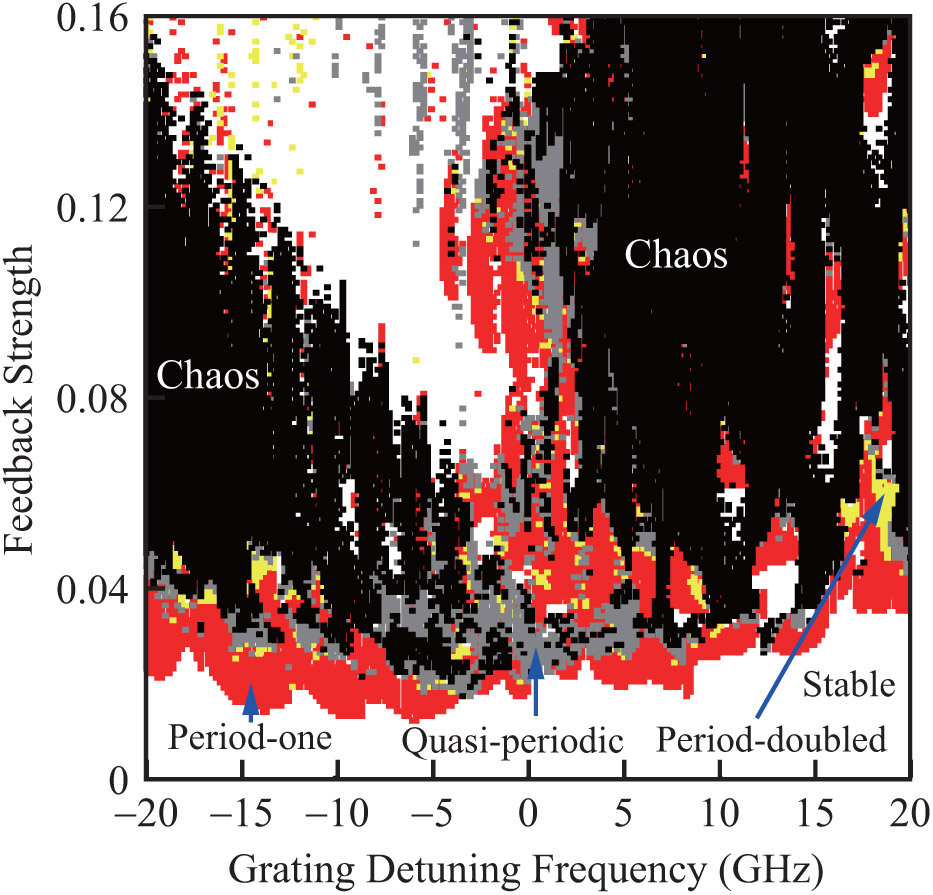 We experimentally investigated the performance of a continuously tunable RBG by evaluating the residues in the autocorrelation of the output bits as τs varies (see Figure 3). The residue is defined as the maximal autocorrelation when the lag time is close to τRT. The value of τs affects the quality of the randomness. In particular, when τs : τRT is rational, the TDS caused by the mirror feedback delay time is easily sampled during digitization. The output from FBG feedback, on the other hand, shows no such problematic residues.10 Suppose that five output bits are extracted from each intensity sample at the ADC. By continuously tuning τs down to 50ps, the sampling rate is increased to 20GHz, which corresponds to an increase in the bit rate of up to 100Gb/s. 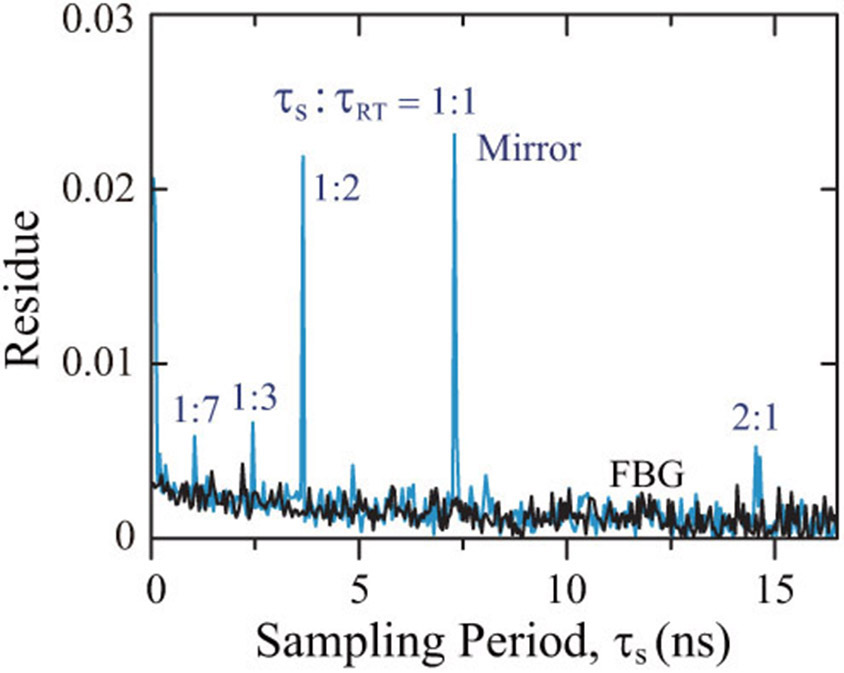 Figure 3. Experimental residues in the autocorrelation of the output random bit sequences, shown as a function of the sampling period. FBG feedback (black) is contrasted against mirror feedback (blue).10

In summary, we have developed a simple approach for RBG based on a semiconductor laser that is coupled with an FBG. The use of FBG feedback ensures that the output bits are random at any sampling period. The continuous tunability of our design shows promise for application in security or computational digital systems with variable bit rates. We hope to extend this technique to maximize the randomness extraction and to exploit the synchronizability of high-dimensional chaos. Future work could also be devoted to designing dispersive feedback to minimize the TDS for RBG.

This work was supported by two grants from the Research Grant Council of Hong Kong, China (projects CityU 110712 and CityU 111213).

Song-Sui Li is pursuing his PhD in electronic engineering on grating-induced laser dynamics. He previously worked for the China Electronics Corporation.

Sze-Chun Chan is currently an associate professor at the Department of Electronic Engineering and the State Key Laboratory of Millimeter Waves. His research interests include nonlinear laser dynamics, chaos generation, and photonic microwave generation.