Our bodies radiate important data about ourselves all the time. Examples include the electrical activity transmitted by the heart, brain, and muscles through the skin. For this reason, wearable devices that can pick up and transmit signals from the human body have the potential to transform mobile health as well as the so-called human-machine interface, which prompted Forbes magazine to name 2014 the ‘year of wearable technology.’ However, because the wafer-based integrated circuits on which the technology relies are planar, rigid, and brittle, state-of-the-art wearable devices are mostly in the form of ‘chips on tapes’ or ‘bricks on straps.’ These bulky structures cannot maintain intimate, prolonged contact with the curved, soft, and dynamic human body required for long-term, high-fidelity physiological signal monitoring.

Recent advances in flexible and stretchable electronics offer viable solutions.1 In particular, epidermal electronic systems (EESs) are a class of wearable devices whose thickness and mechanical properties match those of the human epidermis.2 These devices conform to human skin like a temporary transfer tattoo and deform with skin without detachment or fracture. EESs were initially developed to monitor electrophysiological signals,2 and thereafter skin temperature,3 hydration,4 stiffness,5 and sweat.3–6 A near-field communication antenna based on EES technology has also been reported.7

The thinness and softness of EESs causes them to collapse and crumple after being peeled off human skin, which makes them ideal for use as disposable electronic tattoos. For the technology to be widely successful, however, will require low-cost, high-throughput manufacture. Current EESs rely on standard microelectronic fabrication processes such as vacuum deposition of films, spin coating, photolithography, and wet and dry etching as well as nonstandard transfer printing. Although these methods are effective, they have a number of disadvantages. For example, the rigid handle (support) wafer required for photolithography is incompatible with roll-to-roll processes typical of flexible electronics. Cleanroom facilities, photomasks, and photolithography chemicals are expensive. High-vacuum film deposition is time-consuming and consequently impractical for thick films. And, finally, standard processes are personnel-intensive, which adds to the cost of EESs and limits their availability.

Our newly invented ‘cut-and-paste’ method8,9 offers a very simple and immediate solution to these challenges. We replace high-vacuum metal deposition by thin metal-on-polymer laminates of various thicknesses purchased directly from industrial manufacturers. Instead of using photolithographic patterning, we use a benchtop programmable cutter plotter to mechanically carve out the designed patterns and remove the excess (see Figure 1). Thus, the manufacturing process is freeform and subtractive as opposed to being simply additive, which is the current popular technology represented by printed electronics. (Inks used in printed electronics are expensive and often require high-temperature curing, which is incompatible with many soft substrates.) The cutter plotter can pattern both thin metal and polymer sheets up to 12 inches wide and several feet long, substantially exceeding lab-scale wafer sizes. Because the patterns can be carved with the support of thermal release tapes (TRTs), the patterned films can be directly printed onto a variety of tattoo adhesives and medical tapes with almost 100% yield. 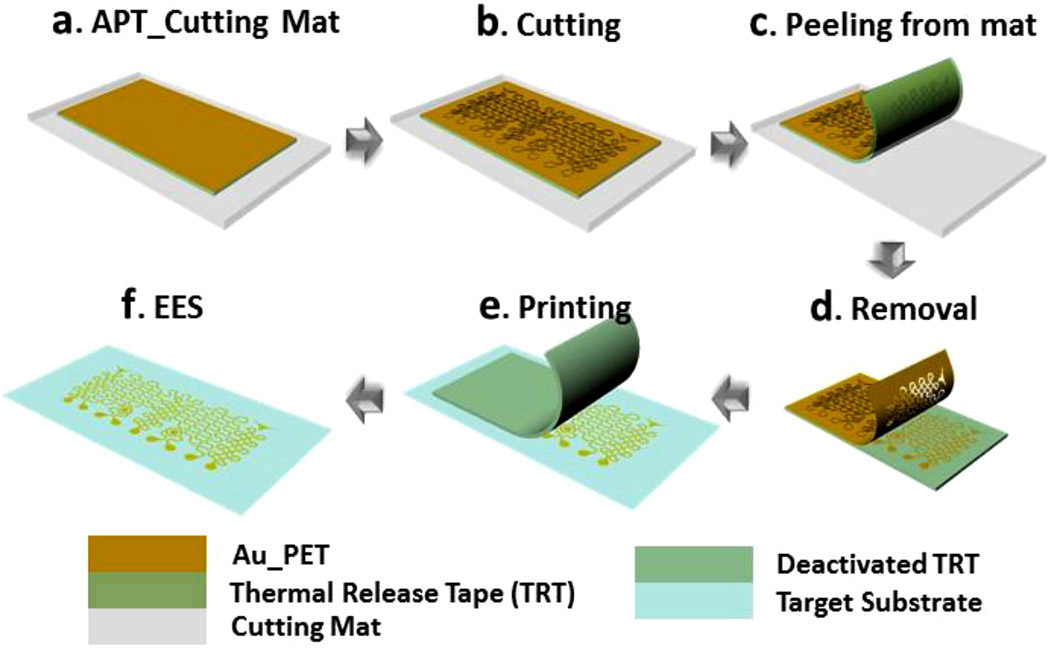 The entire process can be completed on an ordinary laboratory bench with no wet processing and within 10 minutes, which allows rapid prototyping. Equipment used includes only a desktop cutter plotter for thin-film patterning and a hot plate for TRT heating, enabling portable manufacture. Because no rigid handle wafer is needed at any point in the process, the cut-and-paste method is intrinsically compatible with roll-to-roll manufacturing.

To demonstrate the method, we fabricated multimaterial EESs and used them to monitor electrical activity from the heart (electrocardiogram), muscle tissue (electromyogram), and the brain (electroencephalogram), as well as to measure skin temperature, skin hydration, and respiratory rate (see Figure 2). A planar stretchable coil of 9μm-thick aluminum ribbons in a double-stranded serpentine design is integrated on the EES as a low-frequency, wireless strain gauge, which could also serve as a near-field communication antenna in the future. 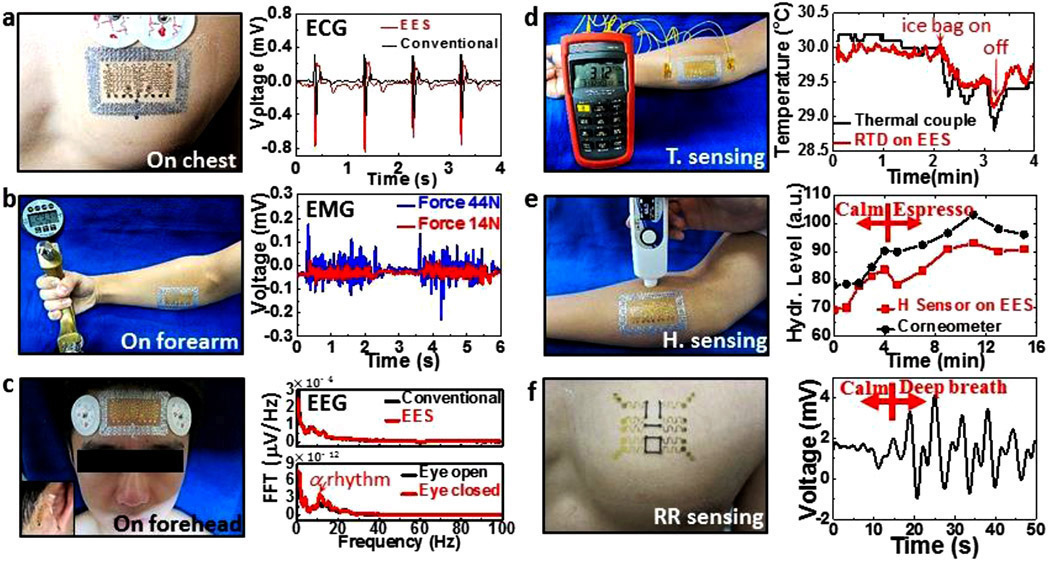 In summary, we have demonstrated a versatile, cost-effective, and fast method of manufacturing multimaterial, multiparametric EESs that can be intimately but noninvasively applied on human skin to measure a range of physiological signals. Our cut-and-paste method enables completely dry, benchtop, freeform, and portable manufacture of EESs within minutes, without need of vacuum facilities or chemicals. The method has proved effective in patterning metal-on-polymer laminates and elastomeric sheets, but it is not applicable to ceramic thin films (e.g., silicon or indium tin oxide) because indentation by the cutting blade would easily fracture the intrinsically brittle ceramic film. We have, however, demonstrated a variation of the cut-and-paste method to manufacture highly stretchable, transparent interconnects based on brittle indium tin oxide film.10 In addition to EESs, we expect the cut-and-paste method to be useful for manufacturing other stretchable devices, including circuit boards that house rigid integrated circuit chips and highly expandable sensor networks for health monitoring.11 Our next step is to apply the cut-and-paste method to manufacturing transparent EESs using 2D materials such as graphene and molybdenum disulfide.

Nanshu Lu is an assistant professor. She conducts interdisciplinary research on the mechanics and manufacture of bio-integrated soft electronics. She is the recipient of a National Science Foundation CAREER Award and Young Investigator Awards from the Air Force Office of Scientific Research and the Office of Naval Research.