Introducing structural interlayers to extend the lifetime of organic LEDs

Thermally activated delayed fluorescence materials, as alternatives to phosphorescent materials, are used in a modified device architecture that is promising for low-cost and highly efficient displays and lighting.
10 May 2016
Chihaya Adachi, Daniel P.-K. Tsang and Toshinori Matsushima

Organic molecules can be amazingly colorful light emitters, and this capability is harnessed in organic LEDs (OLEDs). OLEDs are simple electrical devices that consist of a stack of organic layers (thinner than a human hair) sandwiched between two electrodes. The extreme scalability and thinness of individual OLEDs makes them useful for a variety of applications—from tiny pixels for vivid mobile displays to large-area lighting panels—which can be lightweight and even flexible. Although the commercial market for OLED displays and televisions is steadily growing, advances are still necessary to reduce their cost, improve their efficiency, extend their lifetime, and thus realize the full potential of the devices.

In our work we have been developing new emitters, based on thermally activated delayed fluorescence (TADF), as alternatives to phosphorescent materials for OLEDs. Our goal has been to achieve long device lifetimes and high efficiencies, without the need for expensive metals. Through a novel molecular design, we have created TADF materials that can convert—by absorbing small amounts of thermal energy from their surroundings—the three-quarters of electrical charges wasted by traditional fluorescence into a usable form.1 Although efficient TADF emitters can cover a wide range of the color spectrum (from red to blue), the reported operational lifetimes of TADF-based OLEDs currently trail those of fluorescent and phosphorescent devices (since TADF is still a relatively new technology).2 We have thus also been investigating new device structures for reducing the rate at which TADF-based OLEDs under operation degrade and lose brightness.3

By starting our investigation with a standard OLED structure (see Figure 1), we found that adding very thin layers of 8-hydroxyquinolinato lithium (Liq) on each side of the hole-blocking layer (which prevents holes from escaping the emitter layer before recombining) could greatly improve the lifetime of the device. We inserted Liq layers (as shown in Figure 2) into devices that included a green TADF material—(4s,6s)-2,4,5,6-tetra(9H-carbazol-9-yl)isophthalonitrile (4CzIPN)—as the emitter. This led to an eightfold increase in LT95 (the time it takes for the brightness of a device operated under a constant current, with an initial luminance of 1000cd/m2, to drop by 5%). This small modification could also increase the lifetime of OLEDs that are based on the common phosphorescent material fac-tris(2-phenylpyridine) iridium(III), Ir(ppy)3. 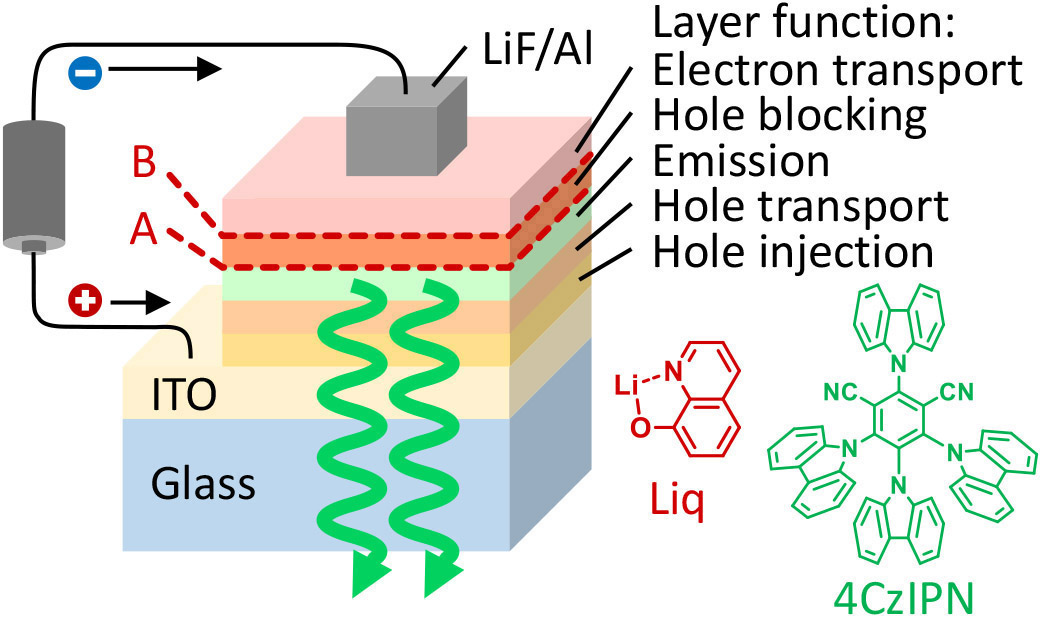 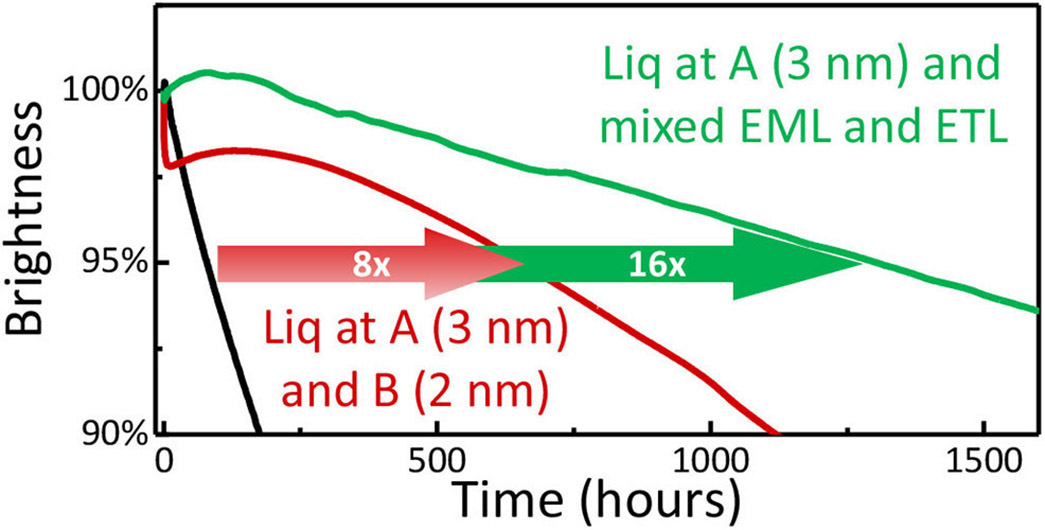 Figure 2. The change in brightness of OLEDs as a function of the time that the device is operated at a constant current (at an initial brightness of 1000cd/m2). Compared with the standard structure (black line), the device lifetime was eight times longer when Liq was inserted into the structure (red line) and 16 times longer when the emitter layer (EML) and electron transport layer (ETL) were also modified (green line). The locations of A and B are shown in Figure 1. The plots have been smoothed for clarity.

By doping the electron transport layer with Liq and mixing an acceptor material with the host and emitter molecules (i.e., two previously reported techniques),4, 5 we were able to further extend the LT95 of our device to more than 1300 hours (16 times longer than that of the initial device structure). In fact, the actual lifetime would be even longer in real displays because our tests were performed at high brightness to accelerate degradation. Such greatly improved lifetimes without the need to change the emitter demonstrate the stability of TADF materials and their potential for practical applications.

To investigate why the Liq layers can improve the lifetime of our OLED, we evaluated the carrier traps—defects that can capture and obstruct the movement of charges in the devices—by measuring thermally stimulated current (TSC). By filling the traps of a semiconductor film with a small current at low temperature and then slowly heating the film, we were able to produce a measurable TSC when the carriers received sufficient thermal energy to escape the traps. The resultant TSC spectra (see Figure 3) show a significant decrease in the number of energetically deep traps—corresponding to current at high temperatures—when up to 3nm of Liq was inserted between the emitter and the hole-blocking layers. We thus find that reducing the number of deep traps is important for improving device lifetimes. 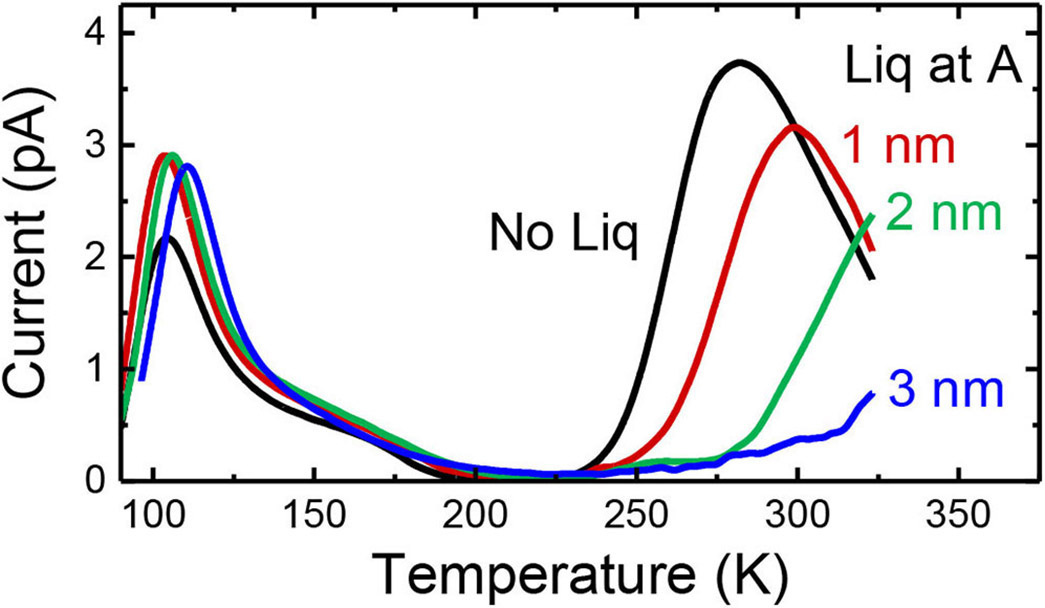 Figure 3. Thermally stimulated current as a function of temperature for devices with up to 3nm of Liq at point A (see Figure 1) in their structure. The plots have been smoothed for clarity.

In summary, we have demonstrated that the use of thin layers of Liq is a promising approach for improving the lifetime of current (phosphorescent) and future (TADF) OLEDs. We are still investigating exactly how Liq reduces traps, but we believe that it acts as an adhesion layer or that it deactivates residual water molecules in the devices. The huge increase in the lifetime of TADF-based OLEDs that we have achieved, just by modifying the device structure, suggests that TADF emitters are stable and promising for use in future displays and lighting applications. We are currently working to reduce the drop in efficiency that occurs when Liq layers are included in our devices. We are also developing TADF materials for stable blue emitters that still prove to be challenging, even with phosphorescent materials.

This work was partly supported by the Kumamoto Collaborations on Organic Electronics, through the Regional Innovation Strategy Support Program sponsored by the Ministry of Education, Culture, Sports, Science and Technology.

Chihaya Adachi's career-long study of OLEDs has included early fluorescent devices during his doctorate at Kyushu University and some of the first highly efficient phosphorescent OLEDs while at Princeton University. He has been a professor at Kyushu University since 2006 and director of OPERA since 2010.

Toshinori Matsushima obtained his PhD in engineering from Kyushu University in 2005. Subsequently, he was a postdoctoral fellow at several universities until 2008. He then became an assistant professor at the Japan Advanced Institute of Science and Technology until 2014. He is currently an associate professor.