A key challenge facing the US is the harvesting, production, storage, and distribution of energy to support economic prosperity with responsible environmental management. Currently, fossil fuels provide more than 80% of the energy consumed in the US (even when significant increases in the use of alternative sources of energy in recent years are accounted for).1 For the US Department of Defense in particular, volatility in the price and availability of fossil fuels leads to significant short- and long-term financial, operational, and strategic risks.2 There is, therefore, clearly a need for new alternative sources of energy.

Solar energy has great potential for long-term economic and environmental impacts because it is renewable and abundant. Practical solar energy usage, however, requires efficient and inexpensive methods of storage, because sunlight is intermittent and diffuse. Inspired by the natural ability of storing solar energy in chemical bonds through photosynthesis, an exciting area of research is the use of sunlight for production of combustible fuel.3 One attractive option is the efficient and inexpensive solar production of hydrogen, which can be used in the synthesis of biofuels, synthetic fuels, or even as a clean burning fuel itself.4

In a recent breakthrough,5 we used cadmium selenide colloidal nanocrystal quantum dots (QDs) to harvest light and deliver photoexcited electrons to a nickel molecular catalyst for the production of hydrogen from protons in water (see Figure 1).6 QDs are excellent light harvesters because they combine the positive qualities of crystalline semiconductors with small organic molecules. As with organic molecules, we can manipulate QDs with the use of inexpensive solution-based techniques. QDs, however, are inherently crystalline and thus quite robust with respect to physical and chemical degradation. 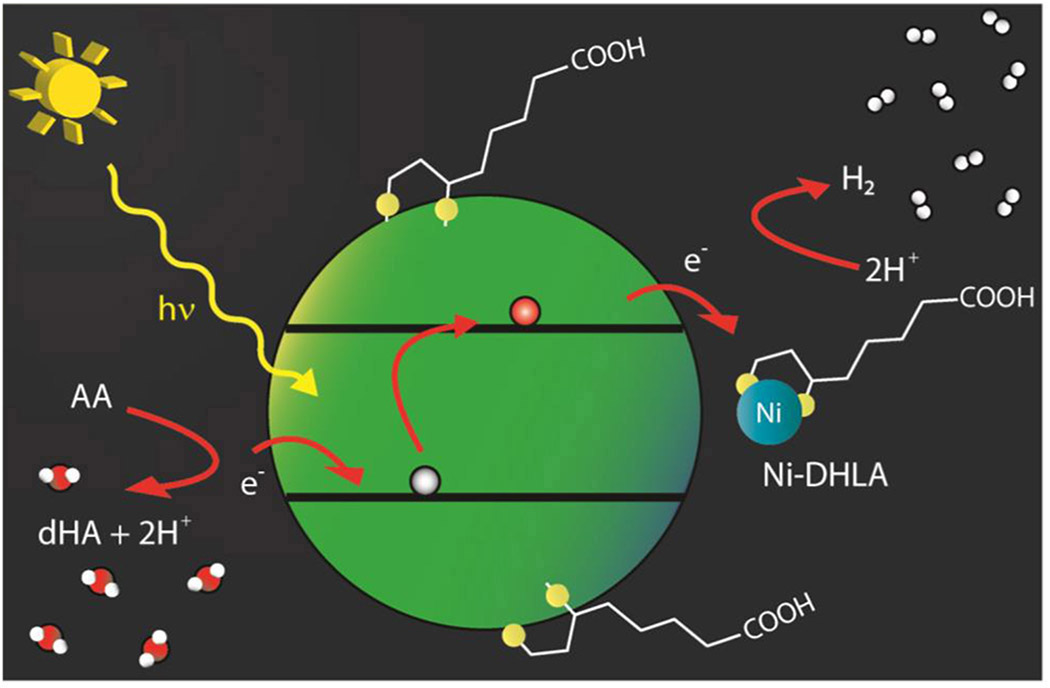 In our system, we used ascorbic acid—also known as vitamin C—as a sacrificial electron donor. This acid delivered an electron back to the photoexcited QD and thus completed the catalytic cycle. We found that our QD-nickel-catalyst system was highly efficient, with a light-to-hydrogen conversion efficiency of more than 38% in water, and more than 66% in a 1:1 water/ethanol mixture. The turnover frequency was also very high, and was comparable with the activity of noble metal nanoparticle catalysts. Importantly, our photocatalytic system is incredibly robust, and over two weeks it showed no decrease in the rate of hydrogen production. The stability and activity levels we measured are unprecedented for hydrogen production systems that lack noble metals. We have therefore demonstrated the potential of QDs for proton-reduction photocatalysis in solution. Furthermore, advances in the wet chemical synthesis of complex nanoparticles offer exciting possibilities to direct electron flow within the nanoparticle. It should thus be possible to optimize and improve the already promising hydrogen generation by tailoring the sizes, shapes, and compositions of nanoparticle-based light-harvesting materials.7

To better understand the origins of the exceptional performance of our cadmium selenide-QD-nickel photocatalytic system, we used ultrafast optical absorption spectroscopy to study the electron transfer dynamics that exist between the QDs and the catalyst.8 Overall, we found that the electron transfer was exceptionally fast, occurring in well under 100ps (see Figure 2). In fact, with two electrons present, electron transfer from QDs to the nickel catalyst was faster than electron–electron annihilation processes, which themselves are highly efficient in QDs.9 Studies of the QD size, and a compositional dependence of the electron transfer, indicate that we may achieve further improvements in hydrogen production efficiency with our system by working with small-core QDs. 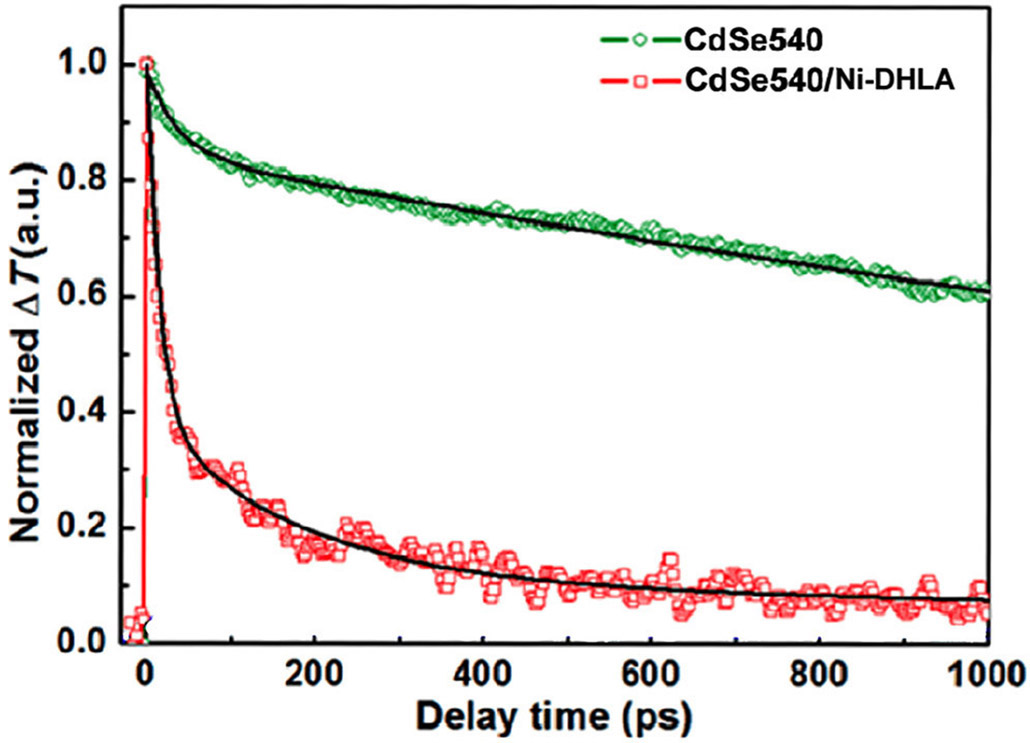 Figure 2. The depopulation of electrons from the excited state of cadmium selenide (CdSe), as measured from the relative change in transmittance (ΔT), is shown in green. This depopulation becomes highly accelerated in the presence of the Ni-DHLA catalyst (red). a.u.: Arbitrary units.

In summary, we have investigated colloidal cadmium selenide quantum dots as novel light-harvesting components of a highly robust, efficient, and active integrated nanosystem for the production of clean hydrogen fuel from sunlight and water. Although QDs and molecular organometallic proton-reduction catalysts present substantial opportunities, it is important to note that a practical solar fuel system based on these concepts is far from a reality. For example, vitamin C, although highly abundant, is too expensive to serve as a sacrificial electron donor in a practical system. Connecting the QDs to a direct source of electrons, such as a transparent conducting photoelectrode, would thus be an important next step.10 In addition, the cadmium selenide QDs that we have studied so far absorb in the visible region of the electromagnetic spectrum. Therefore, more than 50% of the solar spectrum (i.e., which occurs in the near-IR) is not utilized. As a result, we will now focus on developing stable, robust, and efficient near-IR-absorbing nanoparticles that will enable practical solar fuel systems to address this issue. In any case, our initial results indicate that the use of QDs to enable the production of fuels from sunlight may have a bright future.

Todd Krauss is chair of the Department of Chemistry and a professor of optics.