The use of whole-body imagers for enhanced security screening measures has created a number of privacy concerns and involves a high rate of false alarms.1 For instance, even benign objects (e.g., handkerchiefs or boarding passes) that are left in a pocket can trigger false alarms. Although the privacy concerns can be reduced somewhat through the use of automated algorithms,1 the false alarm rate—and the resultant physical pat downs—cannot easily be eliminated.

It has previously been demonstrated that a single-point terahertz inspection tool (also known as a line scan imager) can be used to identify the presence of anomalies during whole-body security imaging.2 Based on their terahertz signature, it is also possible to determine whether such anomalies are benign or whether they pose a threat. Furthermore, time-domain terahertz reflection tomography—a non-contact electromagnetic analog to ultrasound—can be used to generate cross sections of a target structure.2

In this work,2 we have focused on the results of the automated algorithm used in the single-point terahertz inspection method, and on the power of reflection time-domain terahertz reflection tomography, for security applications. As part of these efforts, we have developed a single-point inspection capability into our Picometrix Saf-T-ChekTM terahertz anomaly detection system (ADS). The operation of this system is based on the method of time-domain terahertz reflection tomography. The initial purposes of our ADS have been for security screening of personnel (by domestic or international governments and businesses) and for detection of anomalous items in the head region that may be concealed by religious headgear, wigs, hats, caps, or scarves.3 Our ADS has a minimal equipment footprint, exceptional ease of use, and it is sufficiently lightweight to be portable.

To accomplish this type of inspection, a number of characteristics are required in our terahertz system design. First, the waveform must be collected quickly enough to allow handheld operation. In this study, we thus used a waveform acquisition rate of 100Hz for the single-point inspection tool and 1000Hz for the line scan imaging tool. Our terahertz ADS system (see Figure 1) consists of a handheld inspection wand that is attached—with a lightweight cable—to a portable control unit. In addition, the lens characteristics must be optimized to provide suitable collection efficiency and angular tolerance for handheld operation. It is also necessary for the time delay window to be long enough to accommodate thick head coverings. We use an integrated computer to run a sophisticated artificial intelligence pattern-matching algorithm that automatically judges whether a reflected terahertz pulse sequence is consistent with an anomaly (alarm) or not (clear).

Figure 1. Photograph of the Picometrix Saf-T-ChekTMterahertz anomaly detection system (ADS). The control unit is shown on the left, and the handheld inspection tool and storage cradle are shown on the right.

During operation, our terahertz ADS collects and analyzes data that is representative of the cross-sectional dielectric layer structure and dimensions of the targeted area. Permitted materials (e.g., thin cloth layers and skin) in the target have very different patterns than metal objects (e.g., guns or knives) or thicker dielectric objects (which could be a sheet or block of explosives, or a ceramic knife). A list of example anomalies and potential concealments that can be inspected with our system are given in Table 1. At Picometrix, we have performed a series of thorough tests to detect these types of hidden objects and assess the performance of our single-point terahertz ADS. With the use of our automated algorithm, we achieved a probability of detection of more than 90% and a 0% false alarm rate.

Table 1.List of example anomalies and potential concealments that can be detected using the terahertz ADS. C4: Variety of plastic explosive.

To use our ADS, the operator positions the handheld scanner at distance of 1–4 inches from the region that is to be inspected. The ADS handheld scanner is shown in Figure 2, where it is being used to inspect a region of headgear. Once the ADS is correctly positioned, the operator presses the inspection trigger. The system then automatically reports whether the region inspected is clear (green indicators) or is judged to contain an anomaly (red indicators with audible and tactile alarms). The result of the inspection is also indicated on the control unit screen (see Figure 1). This inspection process lasts only a few seconds for each measured point. 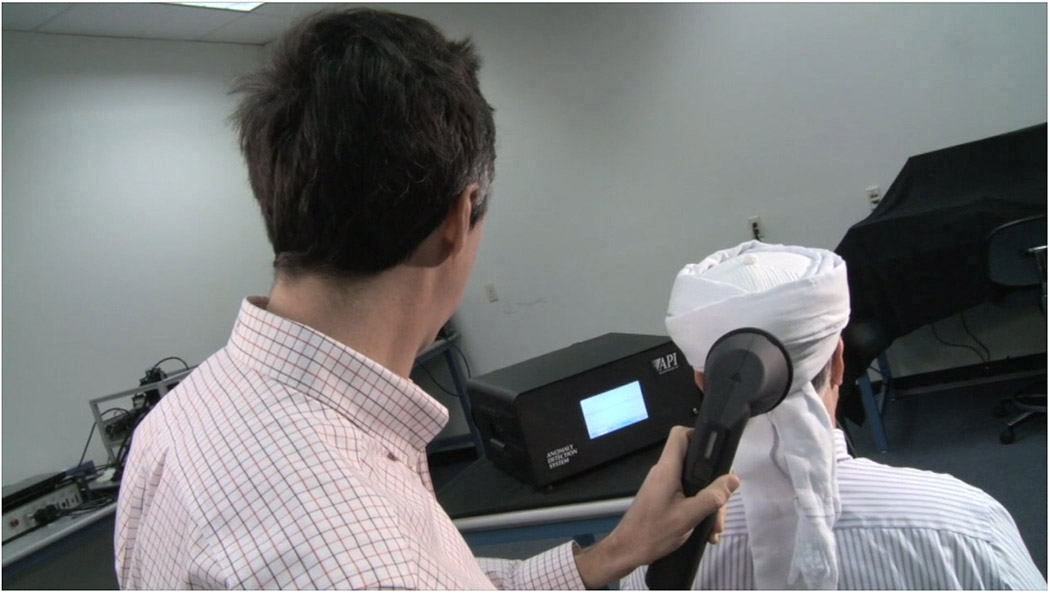 Figure 2. The ADS handheld scanner being used to inspect headgear.

In summary, we have demonstrated that time-domain terahertz reflection tomography (which can be used to detect the layer structure of non-conducting objects)—when coupled with a suitable detection algorithm—can provide an excellent security detection method. This approach can provide a high probability of detection and low rate of false alarms for screening of headgear at a security checkpoint. It can also be used for secondary screening of anomalies previously detected with a whole-body imager. Our future work will involve the expansion of our automated algorithm to include an expanded list of anomalies. We are also working to continuously improve the ease of use of our terahertz ADS.

David Zimdars has been the manager of terahertz research and development since 2001. In this role he is responsible for all terahertz scientific, industrial, and homeland security product development contracts, the commercial T-RayTM2000 analytical/imaging system development, and terahertz manufacturing quality control applications development.